Afghans completed, Cairo 1921 and another visit to the Shed!

Well, I finished 11 Afghans this morning which means I have painted the entire (initial, I hope) 28 figure Artizan Designs release.   Given I use The Sword and the Flame for Colonial wargames, which uses 20 man units, I am going to need a lot more. 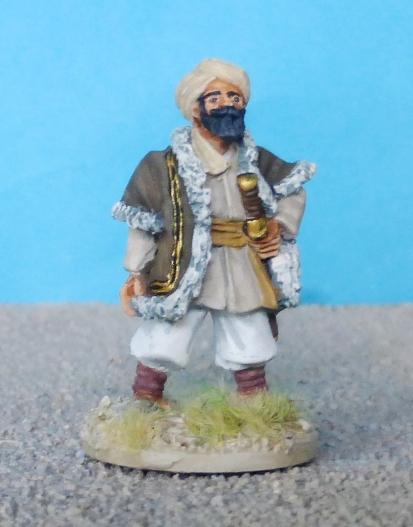 Here is their fearless leader, Bungdit Din, inevitably.   I haven't given the standard bearer a flag yet as my research on Afghan tribes' flags has been particularly fruitless other than they may have been green and triangular,  I did see something on one of the boards about a firm producing suitable flags towards the end of the year (although I can't remember who) so can wait a bit longer. 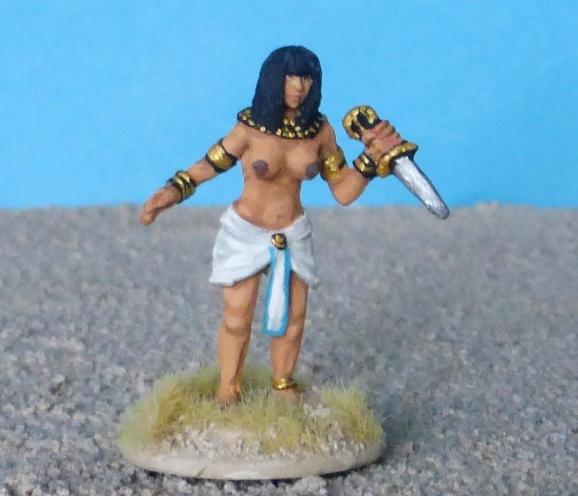 Another one-off from the paint table is this Egyptian girly assassin by Dark Fable Miniatures.  She will see service in Ancient Egypt as well as Victorian London and possibly 1920s Egypt too.  I was invited over to Eric the Shed's again last week and had a look at his splendid Egyptian temple and other scenery he is collecting for a 1920's Egyptian pulp game. 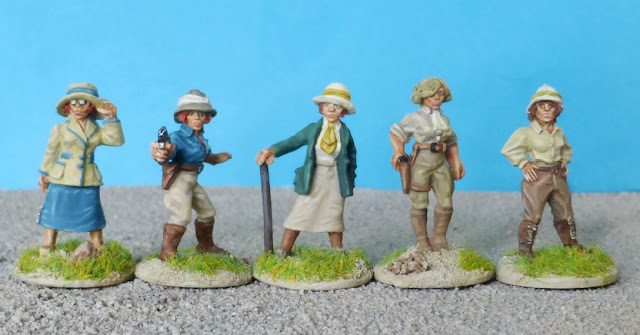 I have been painting a few figures with the thought of an Egypt in the twenties game for some years.  My principal protagonists are the infamous Croissant sisters, French archaeologists from Lyon.

From left to right we have:


Varsité
The second oldest sister, the team's artist and responsible for cataloguing their finds. A keen cyclist and rather distant from her other sisters as she was sent away from home to a Swiss finishing school when she was fifteen, after being found in a compromising position (one of many she is expert in) with her older friend Coralie in the family house near Lyon.  Posed for some artistic postcards in Paris just before the Great War.  These cards were considered key in keeping the morale up of several front line French regiments at Verdun. Collects erotica. Likes girls.  Has been scouring Cairo looking for a Circassian dancing girl to add to her "collection".

The second youngest sister and the only one to have been married. Her Belgian husband was murdered by renegade Schutztruppen in German East Africa and she led a group of her own Askaris to wreak revenge on the Germans during the Great War. A crack shot, she favours a Sharps rifle for sniping and a Holland and Holland Nitro Express for close up work. Smokes cigars. Borderline psychotic

The oldest and most serious of the sisters. She is the historian and writer of the team and despairs of the romantic escapades of her younger siblings. She writes long and appalled letters home to dear Maman in Lyon reporting her sisters' shocking behaviour. Completely unaware that her dear Maman had been discovered by her father in a waterfront bar in Shanghai where she provided the customers with more than just drinks.

Although she is the youngest of the sisters she raises the money for the girl's digs (usually from impressionable older men), obtains firmans (permissions to dig) and generally runs things. She has lived and excavated in America and enjoys driving sports cars (useful in fast getaways from shocked wives who have discovered her with their husbands).

The middle sister. Has no interest in history or archaeology but is a daredevil pilot. Likes the tango, absinthe and seaplanes.  Is in a steady relationship with her Schneider trophy plane's industrialist sponsor and his wife. Is rather closer to her sister Varsité than is socially acceptable. 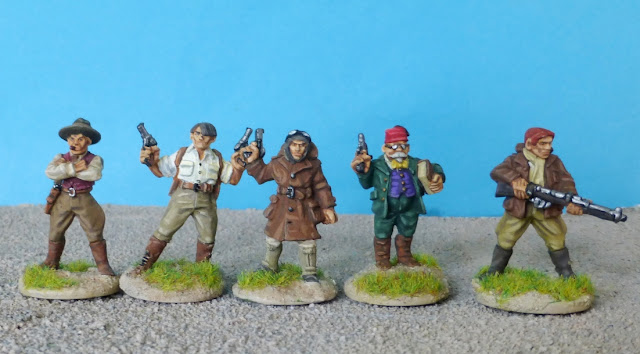 On the male side we have from left to right:

American railroad tycoon and joint backer of the Croissant sister's forthcoming expedition up the Nile.


Ace Great War pilot who specialised in downing Zeppelins and is an expert on photo reconnaissance.  Very keen on getting to know Velocité much better.  Last seen trying to surreptitiously photograph her undercarriage.


Egyptian (or Turkish or Lebanese) expert on ancient Egyptian hieroglyphs. Seems to have some sort of a mysterious map.  Suspiciously seems to also speak fluent German.


Kalba's hired muscle.  He and O'Connell, despite their shared Celtic heritage, do not get on. 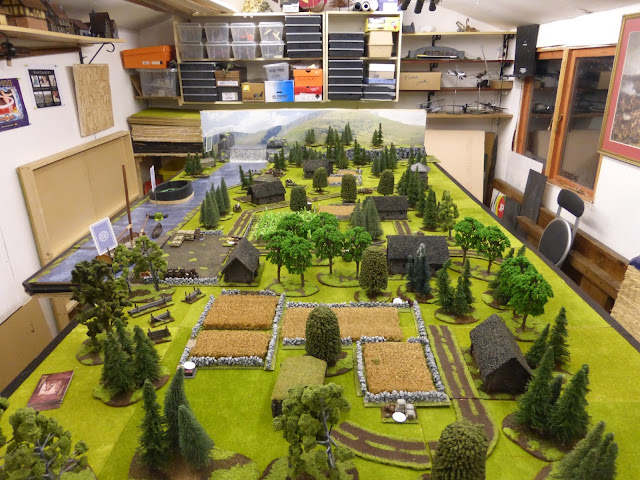 Anyway, no Egyptian follies at the Shed but my first game of Muskets and Tomahawks which was hugely enjoyable.  There is no point me talking about the detail of the game because Eric has done that on his own blog.  As ever, the scenery was superb and Eric gave me some time talking about some of his scenic secrets.  His ability to make splendid scenery is awe inspiring.  The game was a raid by three groups of Indians (sorry, First Nations Aboriginals) on a settlement.  It occurred to me that the scenario would also work perfectly for a pirates or an Indian Mutiny game too. 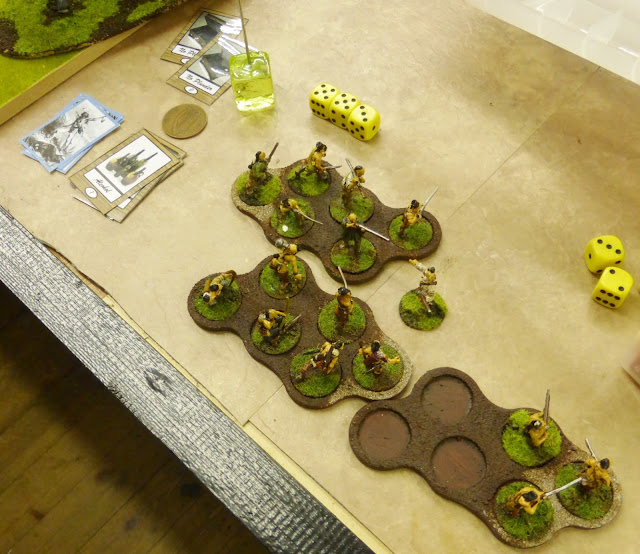 The best thing was the relatively small number of figures needed.  My force was just 25 figures.   I lost three figures during the game which was a sort of treasure hunt.  I have a big load of Conquest figures somewhere and some Galloping Major ones although I don't feel that they are compatible. 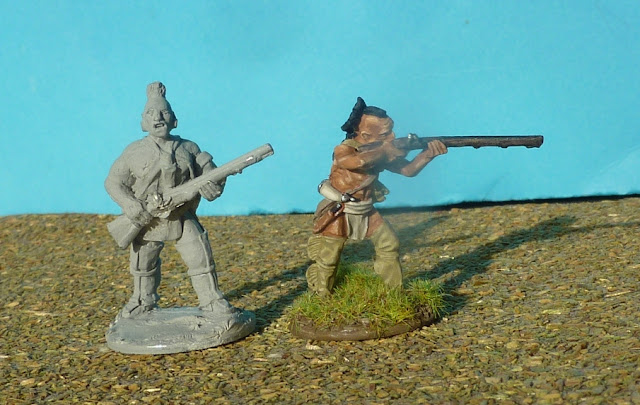 Here, on the left, is a Galloping Major figure and on the right my only painted Conquest one.  They are quite different scales unfortunately.  I am wondering whether the North Star figures might go better with Galloping Major's.  Something else to think about!  I am very grateful to Eric for an excellent game.  I think that is my fourth game this year!
Posted by legatus hedlius at 3:55 pm