Robin Hood at the Shed with Lion Rampant 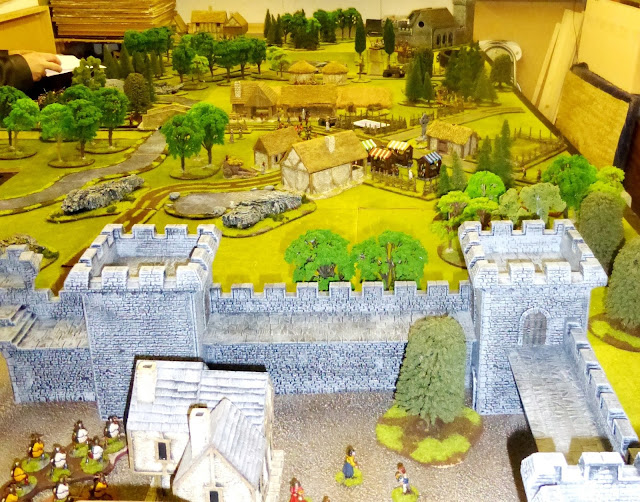 Last week saw my latest expedition to the Shed cancelled due to cold weather but the shedizens regrouped for the planned Robin Hood game yesterday.  We had six players portraying forces commanded by Robin Hood, Little John and Ivanhoe (which was me) against the Sheriff, the dastardly Guy of Gisborne and the Bishop of Lincoln (oddly, the Bishop of Lincoln was one of the original founders of my old college, Brasenose!).  We were using the Lion Rampant rules by Daniel Mersey (who kindly gave me my copy as a prize in a competition he ran last year) so each had a force of four units of various sizes depending on the class of troop.  One or two people had played the rules before but most, I think, were first timers.  Still, they seemed easy to pick up, even for me and I would be very happy to play another game with them.  I won't go into great detail about the game itself or its scenario as it will be dealt with much better on the official Shed journal.  I will just put down a few random thoughts instead; not that all my thoughts aren't random anyway. 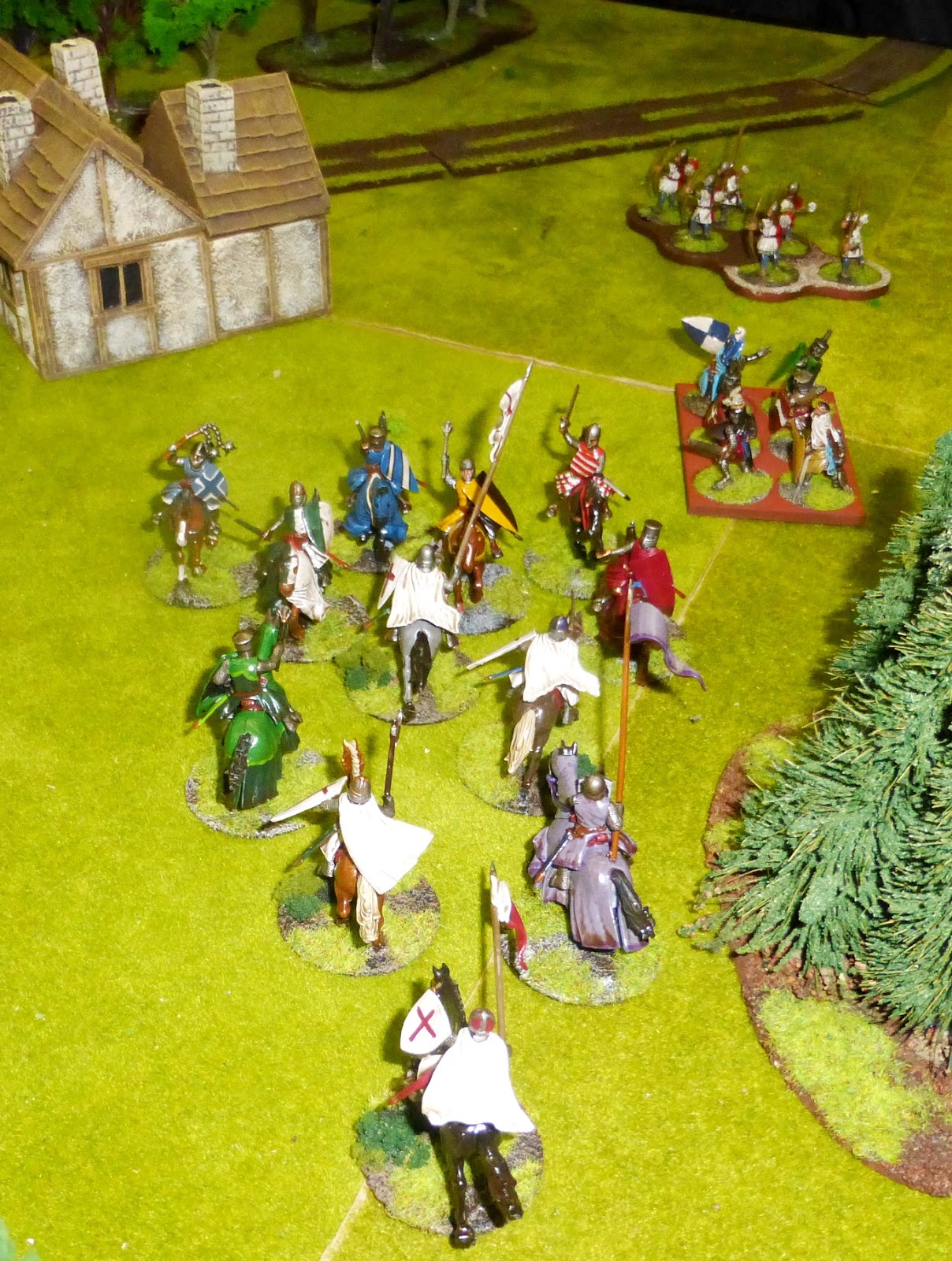 Ivanhoe and his Crusaders are charged by the dastardly Guy of Gisborne.  It's all about to go horribly wrong!

I hate trying out new rules, even, as in this case, if I have read them before, because my brain just can't translate written rules into gaming tactics.   I have to have played several games before these things become, even vaguely, clear.  As a result, I made a huge tactical error right at the beginning of the game which my opponent (the dastardly Guy of Gisborne), despite never having played the rules before either, recognised and exploited, leaving me without my best unit and indeed, my leader Ivanhoe, within the first couple of moves.  Incidentally, any time I hear the name Ivanhoe the opening of the last movement of Tchaikovsky's fourth symphony comes into my head, as it was used as the theme music of the 1970 BBC series, which I remember well from when I was younger. 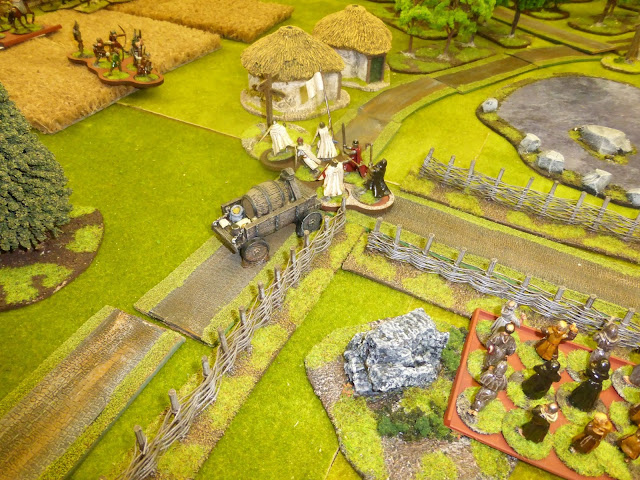 My men at arms did collect two out of the eight amounts of tax money up for grabs but probably should have been fighting instead.  The monks did nothing but walk up and down protecting their nuns

My second major mistake was that it never occurred to me that Little John's forces to my left were allies so I set off with my troops to attack him before realising this, meaning that half my force never got into combat.  Oh dear!  The other shedizens are very patient with me.  It's a bit like inviting someone over to play tennis who understands that you have to get the ball over the net but doesn't know the difference between serving and receiving and what all the lines on the court signify. 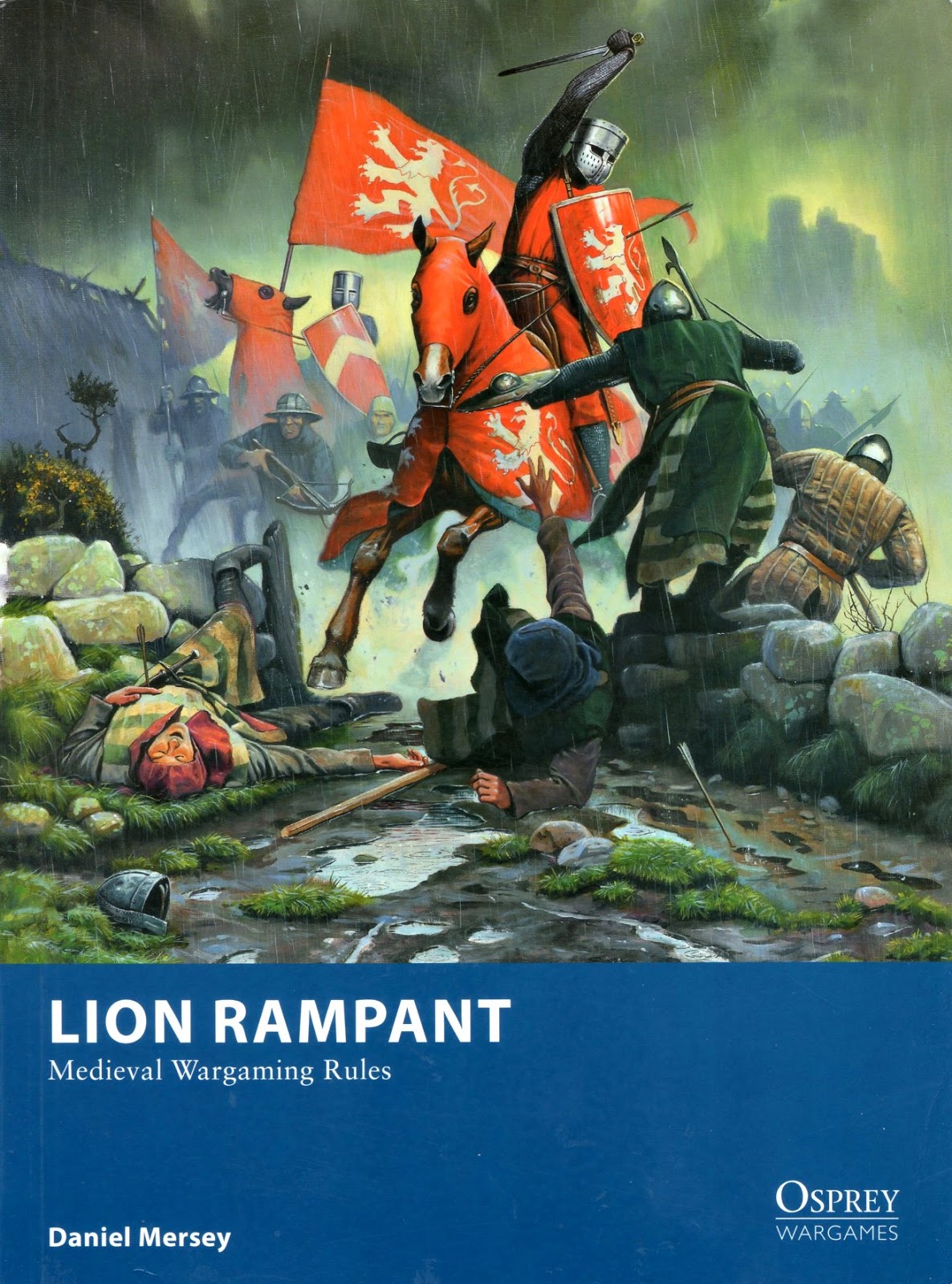 One of the key frustrations we encountered was that the rules, like several others I have played, need a dice activation for a unit to undertake an action in a move but if you fail then your move immediately ends.  So, as I found on three moves in a row, if my crossbowmen couldn't fire then none of my other units got to do anything that go either.  Now it took me some time to work out that it was best, therefore, to move a low activation score unit first and save the higher score unit for a little later in the sequence.  On our side we had three moves where, basically, none of us could do anything.  For the latter part of the game, therefore, Eric modified the rules so that if you failed to activate one of your units you could then and try to do the others rather than your turn ending.  This is, however, something of a fundamental change to a set of rules which is designed to move things along quickly, as the dastardly Guy of Gisborne pointed out.  I suppose a compromise, in battles featuring multiple players, would be that if you fail your first activation then you have a chance to do just one more unit only. The rules are written for two players but Eric used a Bolt Action-style card draw to randomise the individual forces order of activation during each turn (known as the Swedish method, in this context).

Anyway I liked the rules a lot and now feel energised to paint some suitable forces.  Wars of the Roses would be the logical choice, as I already have the figures, even though this slightly earlier medieval period is appealing because of all the old films my mother introduced me to such as Ivanhoe (1952) The Black Shield of Falworth (1954), The Black Knight (1954) and, of course, Errol Flynn's peerless The Adventures of Robin Hood (1938). 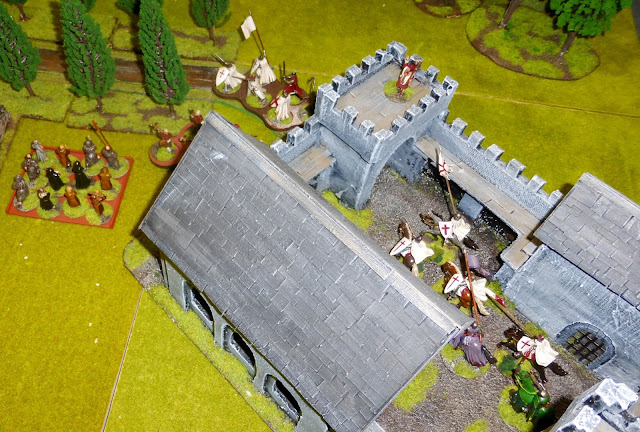 My forces at the beginning of the battle

On the subject of figures my force was largely supposed to be Crusaders and these were some of Fireforge's plastics which did, I have to say, look splendid.  I have some of their Teutonic knights somewhere.  My force only consisted of thirty figures.  A very achievable amount for an army! Another positive aspect of  these rules!

Anyway, thanks as ever, to the redoubtable Eric and his fellow shedizens who continue to tolerate me and my total ineptness!  The pleasure of playing games on such wonderful scenery reminds me of a caption of a photo in Terence Wise Introduction to Battlegaming which depicted Charles Grant's wargames table: "Every wargamers dream!"  Indeed it is! 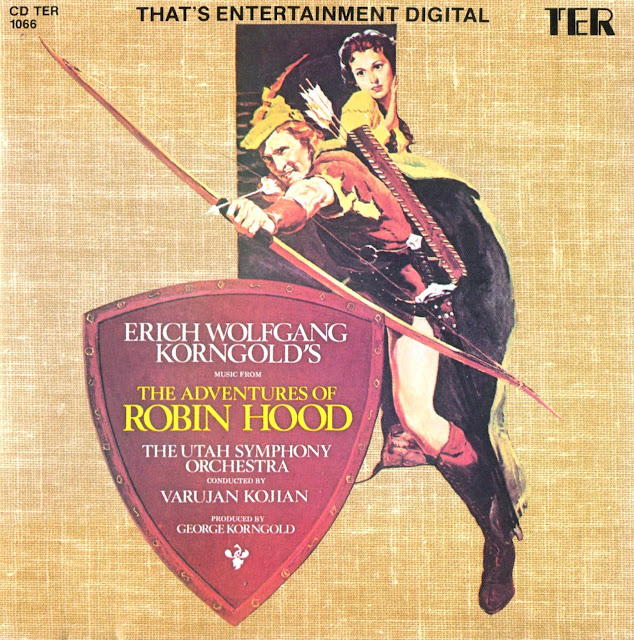 The music I played while writing this just had be be Korngold's Oscar winning soundtrack for The Adventures of Robin Hood, in the recording by the Utah Symphony Orchestra under Varujan Kojian.  It was this score which gave me an enduring love for Korngold, at a time when he was very unfashionable.  I remember whistling the main theme while exploring the walled city of Carcassonne when I was about ten, having seen the film on television at my mother's recommendation.  Later, I picked up the Charles Gerhardt Korngold highlights record which contained a suite from the score, before Kojian's much longer version appeared.

Posted by legatus hedlius at 11:19 am