Paint Table Sunday and a Martian 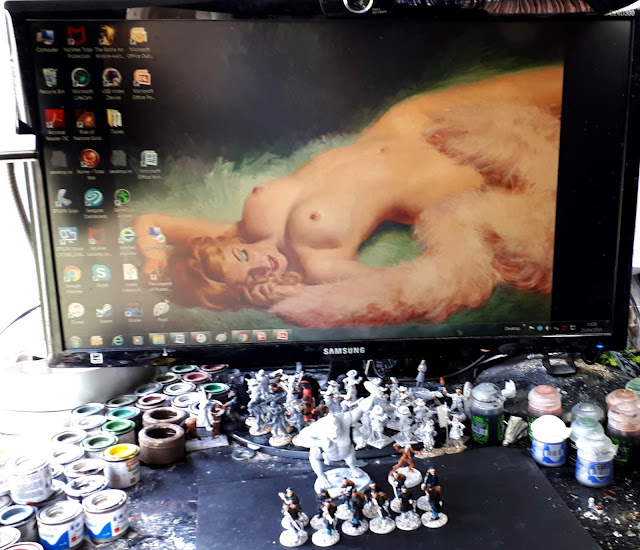 It's Paint Table Easter Sunday and, thankfully, the family have gone down to Hampshire for the usual family Easter Egg Hunt, leaving me in peace. I couldn't go this year as I had some work to do and there wasn't a seat for me in the car, for reasons too complex and tedious to go into. So, apart from the work, which I am having to spend hours on ever day of the holiday weekend because the World Bank have brought a report deadline forward, I have been getting some painting done. The original Paint Table Saturday was first a blog and then a Google+ group originally set up by a lady in Belgium. It really helped me focus on my painting for a while but now, with Google removing Google+, it has disappeared so I don't need to keep to a Paint Table Saturday and Sunday is actually a better day for this so it will be Paint Table Sunday from now on and I hope to post a bit more often. 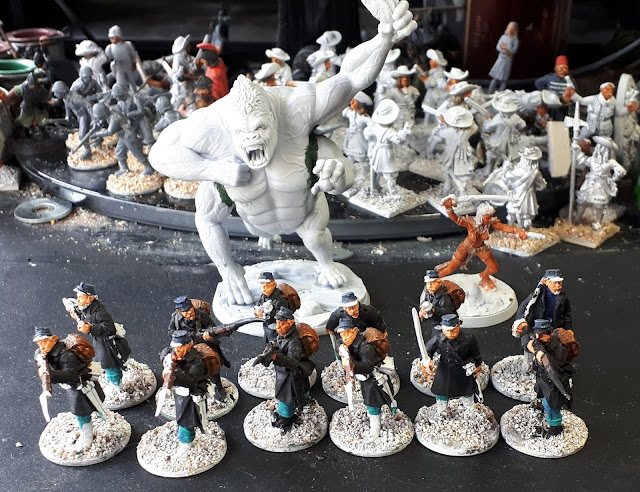 Having finished a figure this week (see below) it was time to reassess my next unit and I decided to put the Napoleonic British aside for a while as it is a 25 man (and a horse) unit and so I got the 1864 Danes out again as there are only 12 of them, Hopefully, I can move these along a bit over the next ten days and get them finished for the end of April which will bring me back to a unit a month this year. 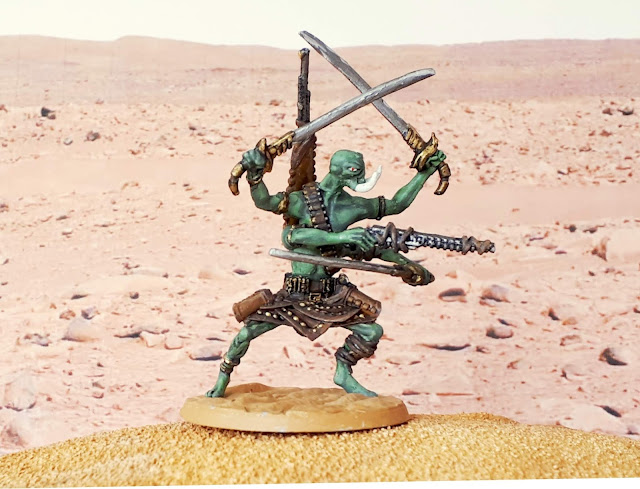 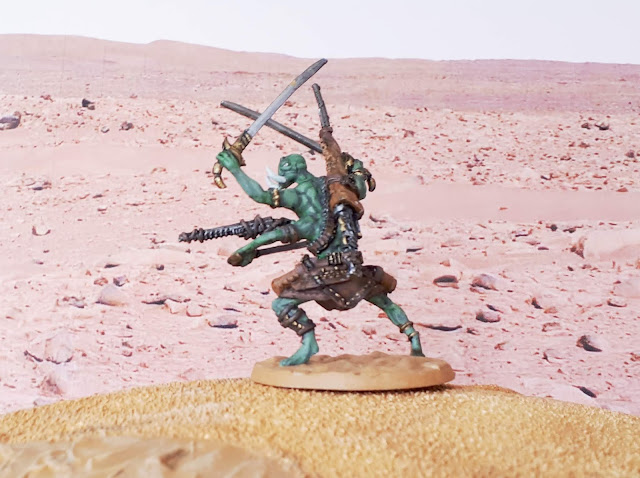 The one figure I finished this weekend was this Modiphius John Carter Thark. This has taken a long time to do as I wasn't quite sure how to handle it but it turned out OK, helped by the fact that it is a nice big figure.  I need to have another look at the rules but they are very much a Role Playing Game which will need other players and a games master so I may try and adapt some other rules for it. Lord of the Rings might work, I think, Next up will be the Giant White Ape and, if I am brave, Dejah Thoris. Plenty to be getting on with anyway, helped a lot by the lighter evenings. 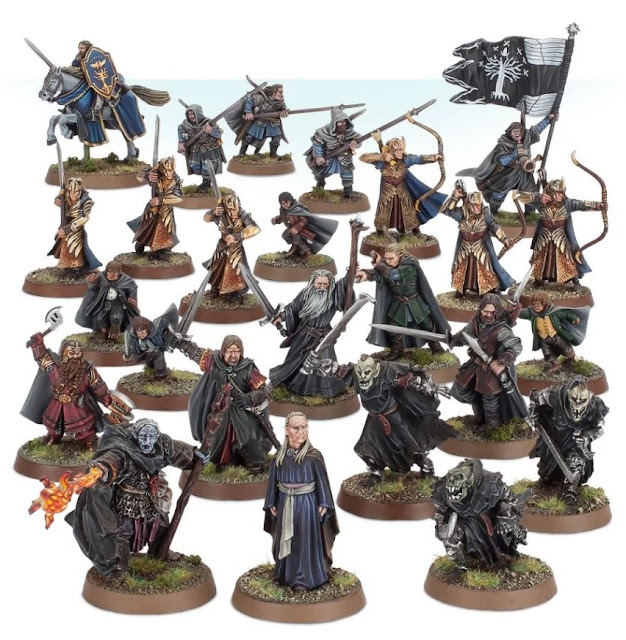 Now what I should be doing is getting rid of surplus figures but instead I have bought quite a lot lately, including some more Star Wars figures at 25% off and the Lord of the Rings made to order deal. With this you have a week to place an order and they will then cast (in metal) just the number that are ordered. I ordered the whole lot on the basis that I can always sell on any I don't want (or, maybe, already have!).  I can sort of justify this because I have at least painted  a lot of LoTR figures in the last few months. 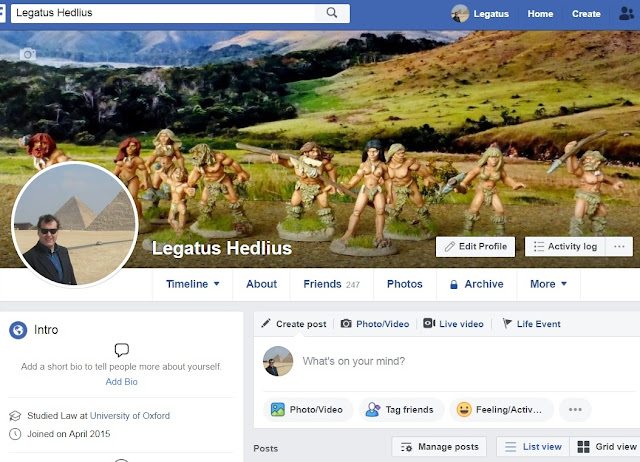 This weekend I have been on Facebook four years.  If you had asked me I would probably have said two years but time flies by when you are plummeting towards death and everything in life happened 40% longer ago than you think. Although you wouldn't guess it from the number of pictures of food and Martinis I post, I did it solely for wargames purposes, as I found that manufacturers were posting news of new releases on Facebook long before they appeared on websites.  I have around 250 'friends' and some I have even met in real life (if there is such a thing).  I do cull those who bang on about politics and try only to link up with those who post wargames material too. I also have ditched people who post too often. There was nice lady who did fantasy maps but she was posting about ten times a day and it clogged up my feed so, however interesting, it was stopping me seeing the hobby posts I wanted to see.  She was like the dreaded Tango01 from The Miniature Page!  Other things annoy me on Facebook but then that is no different from everything else in this so called life. The worst, however; even worse than people who bang on about politics, even worse than people who post brilliant painting and then fish for compliments, even worse than people who post pictures of Minions, even worse than people who post cute homilies (all Americans), even worse than people who write in that big colour background sign style (how do they do that?), even worse than people who say 'hey guys' or call themselves 'a noob', the absolute worse and the thing that sends my blood boiling are people who post gifs of faces reacting to things.  It's far, far worse than emojis, which are, at least small. Presumably there must be websites of these horrors somewhere. I was going to find one to illustrate the point but when I searched for gifs in my windows explorer all I got were a few pictures of naked ladies running along the beach (thanks Sophie) which would not be appropriate, however delightful. 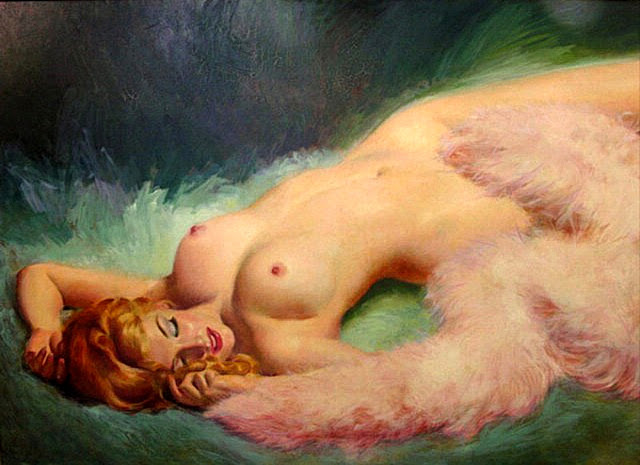 Anyway, speaking of naked ladies, today's wallpaper is this superbly tactile painting by Earl Moran, which I found in my pin-up section of my PC when looking for a suitable Easter picture for my Facebook page yesterday. Moran (1893-1884) discovered a young lady named Norma Jean Dougherty and she modelled for him for four years from 1949. They remained friends even after she became Marilyn Monroe. Already an established pin-up artist, he had been doing calendars for Brown & Bigelow since 1932 and a 1940 Life feature on him made him a huge star. In those days, in a calendar of 12 pictures, the publishers would allow the artist to include onc nude a year and Moran's were more sensual than any others.  Later in his life he concentrated solely on nudes and this one comes from that period, dating from around 1970.  Nearly all of his work was in pastels, amazingly. 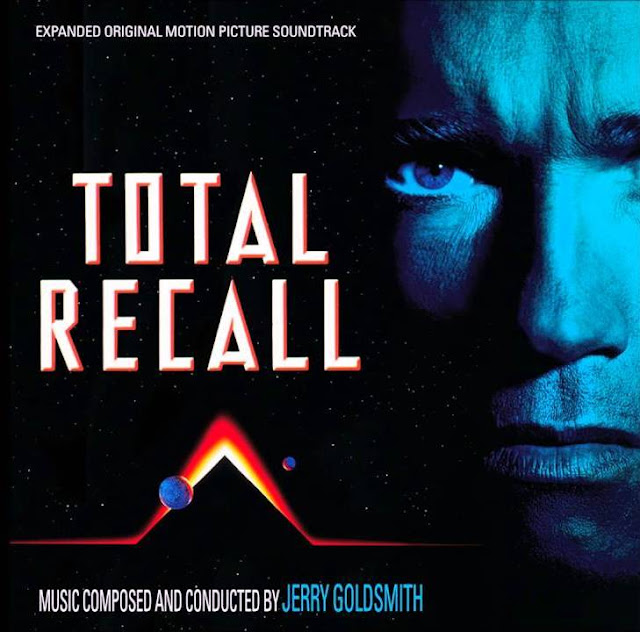 Having been working my way through Martian themed music, today's music is the expanded soundtrack to Total Recall (1990) by Jerry Goldsmith which has some striking 'alien' sounding cues and is one of his best scores, with an excellent blend of orchestral and electronic music. 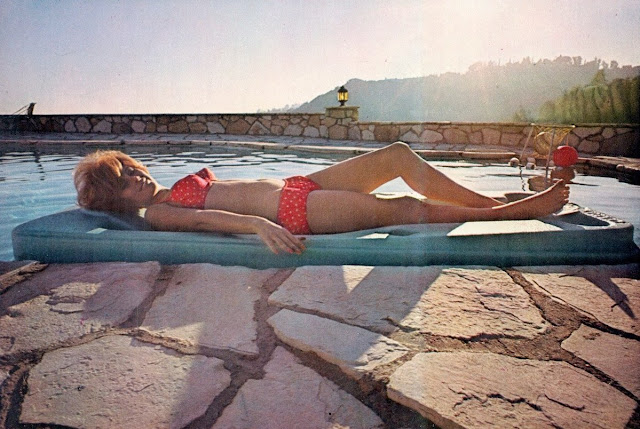 The Old Bat was out at  a friend's 60th birthday party last night, so I watched Diamonds are Forever (1971) hence we have Jill St John on Legatus 'Wargames Ladies here.
Posted by legatus hedlius at 4:41 pm