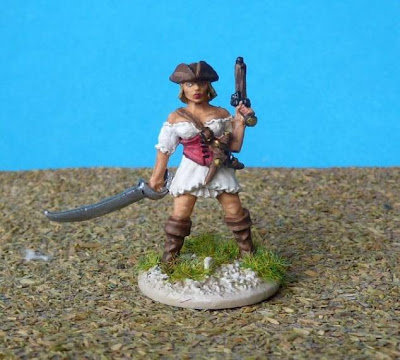 After a rather disastrous May, when I only completed four figures, I have already had a much better first week in June getting nine figures finished this week. Apart from my Baluchis and my Elizabethan cannon

I also finished another Black Scorpion lady pirate and a Trojan War figure. The Black Scorpion figures are bigger than my Foundry ones but their girlie pirates are just irresistible! Next up I have some very Pirates of the Caribbean marines and skeleton pirates to do. 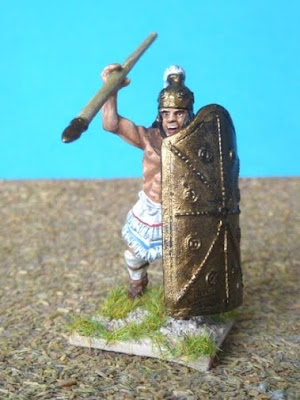 The Trojan is a Foundry Ajax figure and, like many of that range, is based on the illustrations in Peter Connolly's The Ancient Greece of Odysseus. Although this is a children's book, the pictures inside are wonderful; alternating between telling the tale of the siege of Troy and the Odyssey and sections on costume, warriors buildings etc. 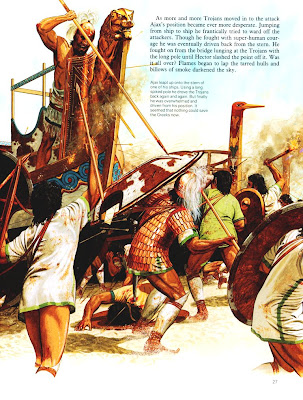 Ajax from the Connolly book


I first got to know the story of Troy from a book about Greek heroes by Roger Lancelyn Green, which had evocative pictures of warriors fighting outside the walls of Troy. The Greeks wearing turquoises and blues the Trojans in red. The problem of differentiating armies for this conflict remains so I am considering, for my Trojans, giving them earth colours such as terracotta, red browns and ochres etc. A book I had as a boy on archaeology, by CW Ceram, introduced me to Heinrich Schliemann and the historic background of the legends.

Next, I remember seeing the film Helen of Troy (1957) at my uncle's house in about 1972. He had a colour TV a long time before we did (I think it cost £400!). The impact of the colourful Mediterranean backdrops, girls in very short pepla and thousands of extras attacking Troy with siege towers imprinted it in my memory and for weeks afterwards my Airfix Romans became Greeks as they tried to get into my Lego Troy. I even made a Lego Wooden Horse!

I'll be your dog! Brigitte Bardot in Helen of Troy

Watching it today, it seems, appropriately, rather wooden but contained some good battle scenes and a very young Brigitte Bardot as a slave girl. Actually, I have stopped being a fan of Brigitte Bardot since I lost my Ray Bans. We had anchored in the bay outside her house just round the corner from St Tropez and suddenly her dogs started barking. Unfortunately I was just climbing into our dinghy and the cacophony (she has a lot of dogs) made me jump causing me to lose my sunglasses into the sea.

I even enjoyed the 3 hour American TV version of Helen of Troy (2003) with the luminous Sienna Guillory. 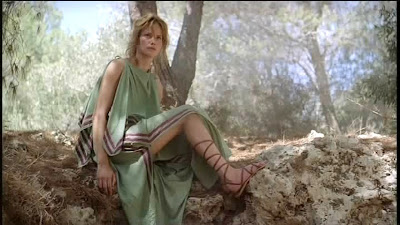 Wolfgang Petersen's Troy (2004) wasn't as bad as everyone said (well, apart from Brad Pitt and granted they completely changed the story...) and I liked their take on the wooden horse. Part of Troy was filmed in Malta and I had to spend some time  there a few years ago, working with the Finance Minister. My favourite restaurant was also Brad Pitt's, when he was filming there, and this had the distinct advantage of attracting lots of young women to the place.


Frankly, if its got Mediterranean scenery, galleys, girls in Greek frocks, chariots, big walls and a wooden horse I'll watch it!


Some time ago I painted some Foundry archers for the Trojan war but lost interest given the limited figures in their range. Recently, however, we have had the Newline Designs Mycenaean range and they fit perfectly with the Foundry Trojans. I picked up a pack at Salute so may add them to the never ending list soon.

Currently in the active section of my workbench I have Perry Wars of the Roses cannon and crew, Foundry Masai, Empress miniatures Zulus and British, Galloping Major French Militia, Musketeer Russian GNW, Foundry Trojans and Crusader Miniatures Normans. I'm hoping to have a good go at them this month now we have finished revising with Guy for his common entrance exams.
Posted by legatus hedlius at 4:58 pm