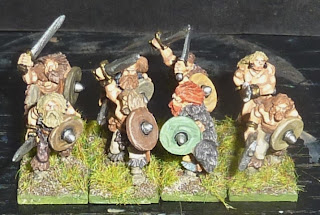 Some people use a points system to keep track of how much they have painted and I can see the sense in this; as a horse and rider takes a lot more painting than a foot figure, for example.  My system is a very blunt instrument, however, and one piece gets 1 point whether it is one foot figure, a man on a horse or an artillery piece.  There is an argument, I suppose, for giving 15mm figures less points because they are smaller.  However, these Copplestone Castings fantasy figures take as much time to paint as 28mm figures I am finding. 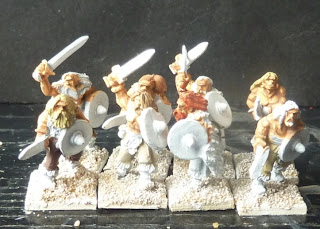 Here we have the next eight (after the seven I painted earlier) but I still have another nineteen to paint until I will get some more as I am rationing myself (unusually).  I took a picture of these when I first started to paint them so can tell that, rather surprisingly this picture was taken on 5th June which means I have finished them in less than two weeks.  This is especially good as I was in Boston for a week during that period and also finishing the Darkest Africa wangwana, standard bearer and pirate girl as well as starting another unit of 28mm (non-Darkest Africa) figures which are well under way.

I really am starting to get some more painting done at last, again, after a very fallow six months.  I have a lot of part-painted figures on the workbench at present so starting another unit last week probably wasn’t a good idea but they have simple uniforms and I hope to get them done next.  I have also started on the Baluchis but these are going to be slow work I think.
Posted by legatus hedlius at 10:40 pm