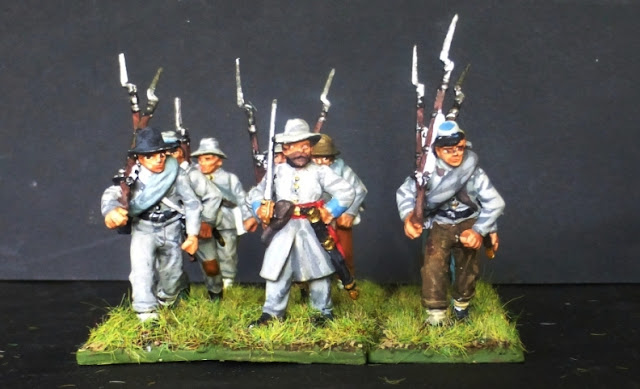 2016 had been a dismal year, with just 10 figures painted. 2017, however, got off to a much better start, prompted by Eric the Shed's planned anniversary Zulu War games.  As my meagre contribution I painted 32 Zulus in January to add to the 40 I had already done. I followed this up in February with 12 Perry plastic American Civil War cavalry.  March dropped to six North West Frontier British but I finished another 17 in April. In May I got another nine ACW figures, three NW Frontier British done and June saw six more NW frontier.  Then I painted nothing until November when I completed my Sikh mountain gun, which finished off my initial force for The Men Who Would Be Kings rules.  So 2017 saw a much better 78 figures completed and an unusual amount of focus with just three conflicts represented. 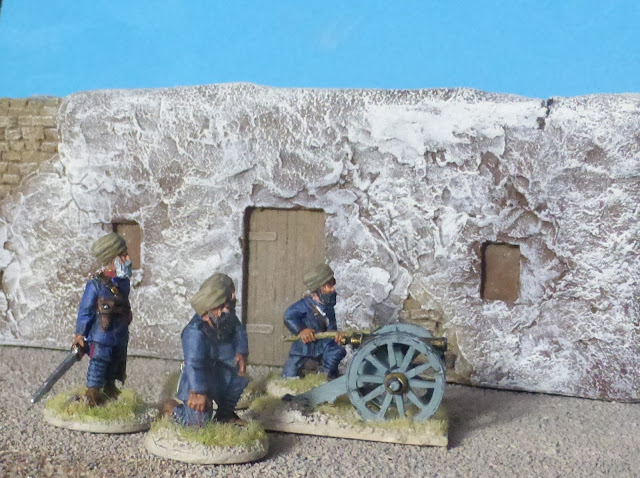 So why the big fall off after June?  Quite simply my eyesight deteriorated so that I could no longer see properly to paint. In particular, my left eye deteriorated to the extent that I could no longer judge distance in close up work, so I could not aim the tip of my paintbrush.  I have been having laser eye surgery for some time but in November I started a four month treatment of very expensive injections into my retina and this has transformed my vision.  Then, for Christmas, my sister gave me an optivisor type thing and, having sneered at these for years, I suddenly could paint again.  I had actually reached the stage where I was about to call time on painting soldiers which would. for me, have been like giving up women or wine.  Something so incomprehensible as to make life utterly worthless.  It was so bad I was actually considering starting on model railways instead.  Best just to go to Switzerland and have an injection, I thought. Although, that said, I have spent a lot of time in Switzerland and I remember it being full of model railway shops so I would have probably abandoned the lethal injection idea and come back with a load of trains, track and little tiny naked people playing volleyball, instead. 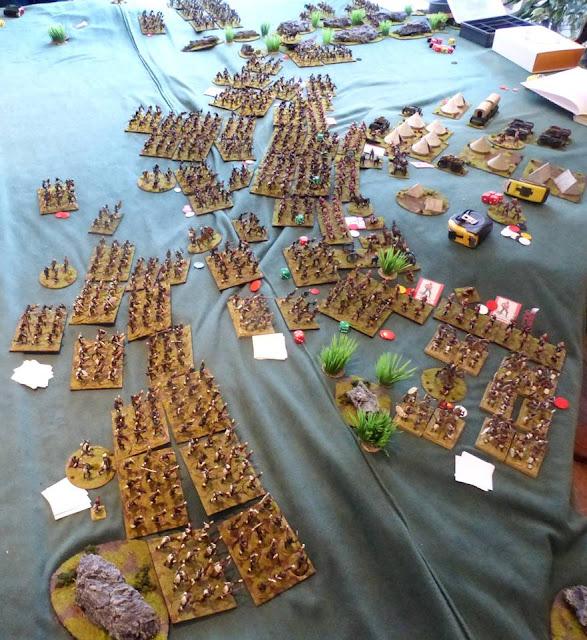 Isandlwana at the Shed (actually in Eric's kitchen, not the Shed)


A cracking start (actually I hate people who say 'a cracking start'- I am becoming offended by my own use of sixties style cliches) to the wargames year was provided by the peerless Eric the Shed and his epic all day Saturday anniversary Zulu Wars games; Isandlwana in the morning and Rorke's Drift in the afternoon, on the 22nd January, the anniversary of both battles.. After that, though, there was nothing.  I did not get down to the Shed again.   Partly this was caused by the fact that my eyesight problems have damaged my night vision and driving at night is now difficult. I hope to risk it when the evenings get a bit lighter. 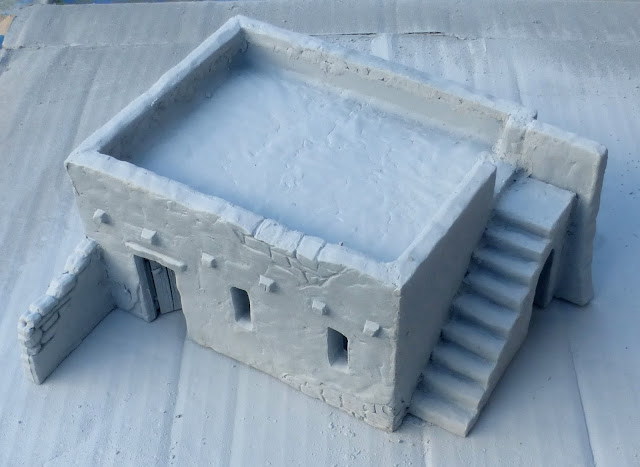 Unlike Eric the Shed, I am useless at scenic items and I made no further progress on the plastic ACW buildings I started last year.  I did build and start painting the Renedra mud brick house (a truly horrible model to put together which needed trowel fulls of plastic filler). Unfortunately, I have now forgotten which colour I started to use on it, so work came to an abrupt stop.  To build an Afghan/Egyptian/Sudanese village I also picked up a number of other ready made and kit models at various shows.  I have just ordered a couple of vacuform models of houses, too, which will take me back to my Bellona days in the seventies. 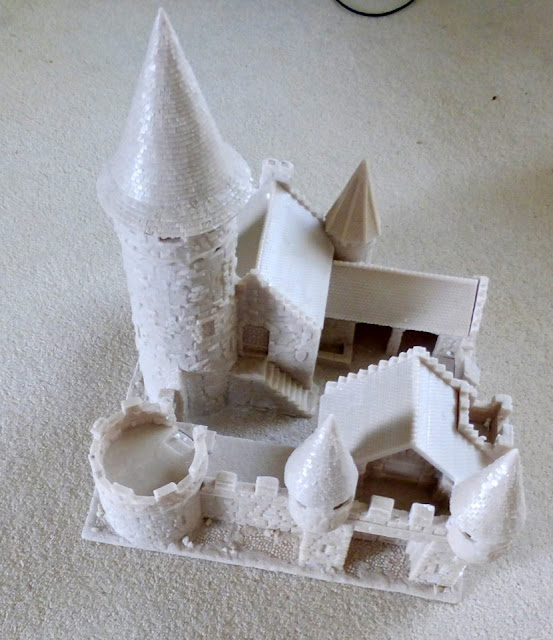 I bought the very last model of Grand Manner's fortified house, which I may deploy for some medieval Hundred Years War Lion Rampant games. It is really a Scottish or Borders fort but the conical turrets will make it look more French, as will the pale ochre paint I am planning to use.  The Old Bat called it my Polly Pocket castle and said it would look better pink.  The less said about pink walls from her the better, at present.  Grand Manner, my favourite resin scenery manufacturer, are only going to be selling painted models from now on, which is disappointing.  It will be interesting to see if this gamble pays off for them.  Higher margins but less sales? 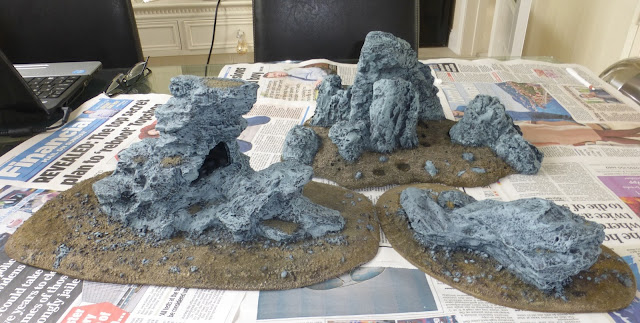 
More successfully, I bought a number of aquarium type rocks and started to repaint them for Lost World or Savage Core Adventures.  With more on the way I hope to have enough soon for some attempt at a scenic board for pulp games.  Next I need to stick on some 'follidge', as the annoying Terrain Tutor calls it. 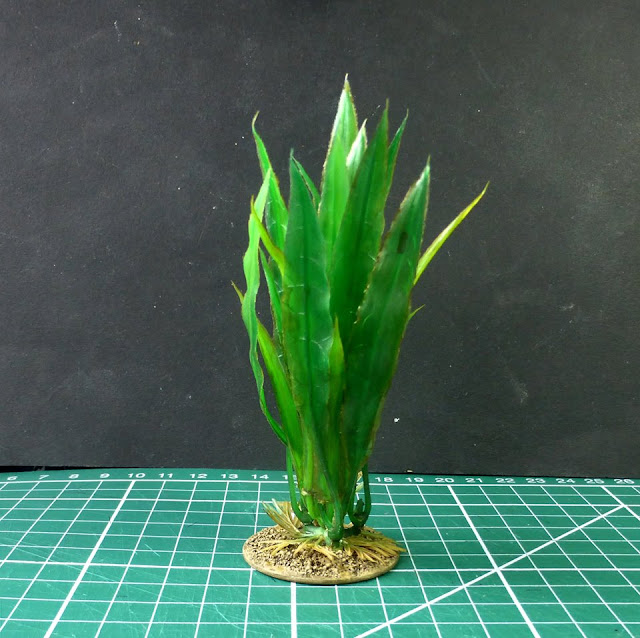 To do this I bravely invested in a hot glue gun and made exactly one piece of scenery by sticking an aquarium plant on a large washer.  I haven't touched it since, though.  The Terrain Tutor did have a good tip in suggesting coating plastic plants with Games Workshop wash which  removed the shiny plastic look very well.  I now have a huge plastic crate full of plastic follidge, which I aim to start working on now it is the spring, appropriately. probably while the Old Bat watches Gardeners' World; the TV programme I detest the most.  Get a proper hobby - not grow your own dump fill! 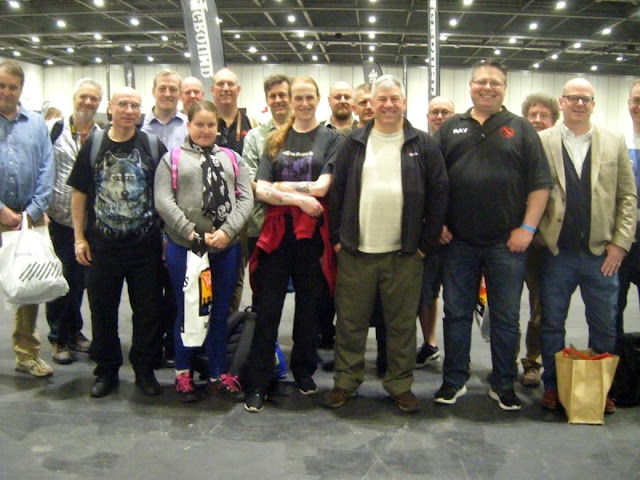 
I did attend Salute, as usual, which I didn't really enjoy for the first time, although I did enjoy the Wargames Bloggers Meet (above- I am on the far left - picture from Wargaming Girl's blog).  I've just got my ticket for this year, though!  Eric the Shed kindly gave me a lift to Colours, which I hadn't attended for a few years and I bought some scenics (the advantage of going by car not public transport).  I didn't attend the other of the three shows I usually do, Warfare in Reading, as I was on my way back from El Salvador 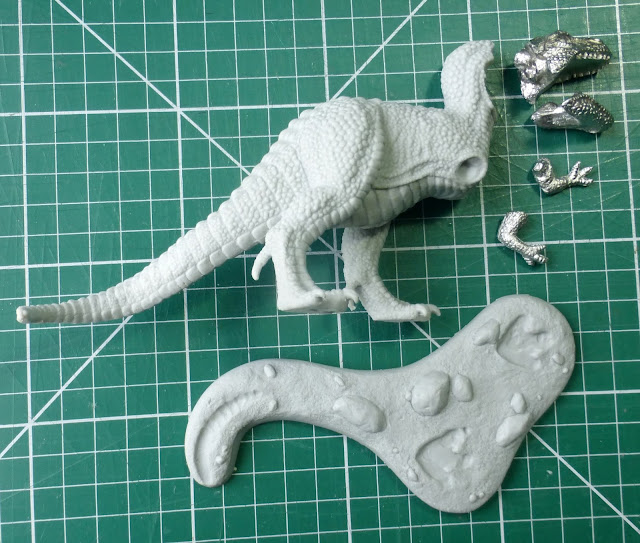 Lead pile reduction didn't go so well this year and I bought over 150 figures but given I painted 78 figures the net increase could have been worse.  Some figure arrivals came through Kickstarters etc, such as the Peninsular Wars figures with the Forager rules, some more of Dark Fables Egyptian ladies and the early twentieth century Germans from Unfeasibly Miniatures.  I also got some Foundry and North Star Darkest Africa, Artizan and Perry Northwest Frontier, Perry ACW, Victrix EIR, Lucid Eye Savage Core, North Star Muskets and Tomahawks highlanders, Manufaktura slave girls and Crooked Dice female cultists, Biggest figure was Antediluvian's Retrosaurus which is also my favourite of 2017. Apart from the NW Frontier figures I didn't paint any of these because of my eye problems but hope to move some along this year.  I did sign up to the Drowned Earth Kickstater but cancelled it when I found out it really wasn't suitable for solo play. 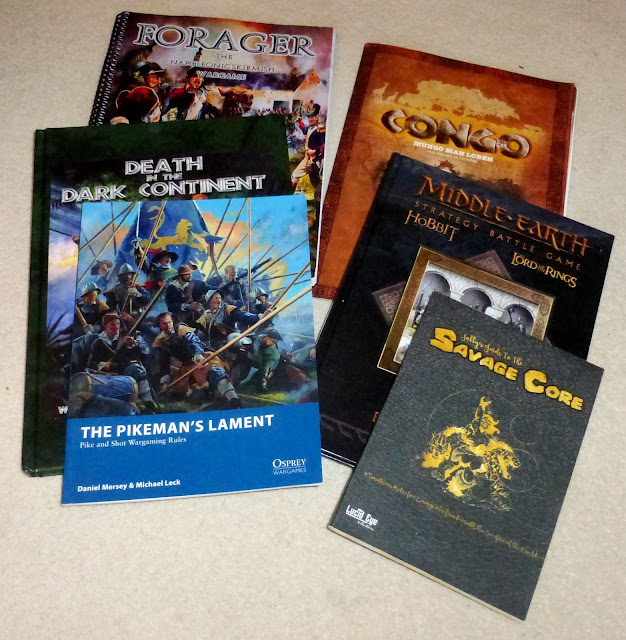 As I said I might in my previous review, I did buy Chosen Men and The Pikeman's Lament.  Pikeman's Lament looks good (although I am still not entirely convinced about small bodies of pikemen in skirmishes) but Chosen Men was just terrible, as it couldn't work out whether it was a one to one game or not.  I sold it on, which is why it isn't in this picture.  As a result of stating my unhappiness with the latter, I was steered towards the Forager Kickstarter.  Death in the Dark Continent was a new glossier edition of some rules I had already played and, indeed, owned but I like to get rid of my old ring bound rules, as they look ugly on my bookshelves!  Battle Companies was also a glossy hardback of rules which first appeared in White Dwarf years ago.  The children and I had some great games using this in the past, so I was happy to get it all in one volume with added companies from The Hobbit.  I picked up the new supplement for Congo, even though I haven't played the rules yet but I enjoy Muskets and Tomahawks, which is by the same people.  The most interesting looking rules are Savage Core, which is very Lost Worldy and I have at least one solo scenario for. 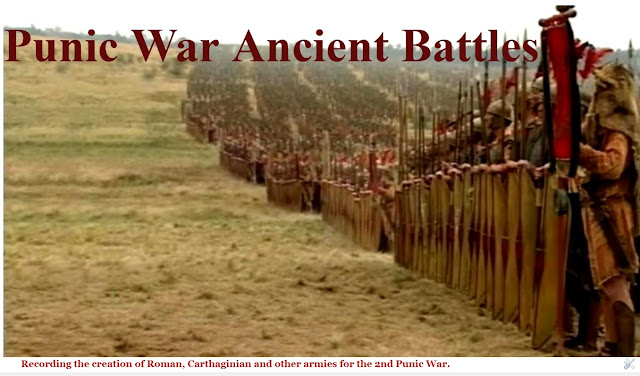 My Punic Wars blog; the latest to get the widescreen treatment


I only posted 39 times on my main blog (this one) in 2017, which is the least since 2011.  Mainly, of course, because I wasn't painting very much.  I only posted on five of my other blogs too.  The number of visits is around the same as last year, averaging about 10,000 a month.  The most popular post, with 1082 views, was one of my paint table Saturday ones which also looked at the Spirit of Ecstasy sculpture, not coincidentally, I suspect.

I am still posting on Facebook, although not much about wargaming, admittedly, and now have 151 'friends', up from last year's 107.  I have only had to delete a few because of political content. Why do people assume that their politics is shared by everyone else and write as such? I have joined several more of the very useful Facebook groups; including the one for the interesting looking Rebels and Patriots rules.  I did see a post that seemed to indicate that more people were joining these than using blogs these days and certainly I now only tend to look at other people's blogs if they link to them from Facebook page.

Plans for the this year 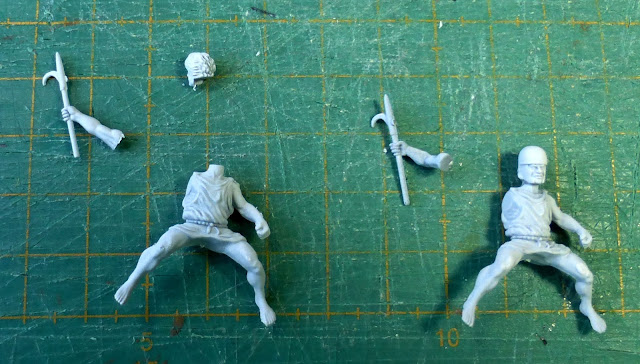 I want to finish my Carthaginian war elephant crew and then, I think, concentrate on my Afghan Tribesmen so that I have both forces for the North West Frontier.  More ACW plastics, some Darkest Africa and maybe finish some units which are well on the way (like some of my Indian Mutiny troops).  Also Savage Core, both figures and scenery, will be a priority. 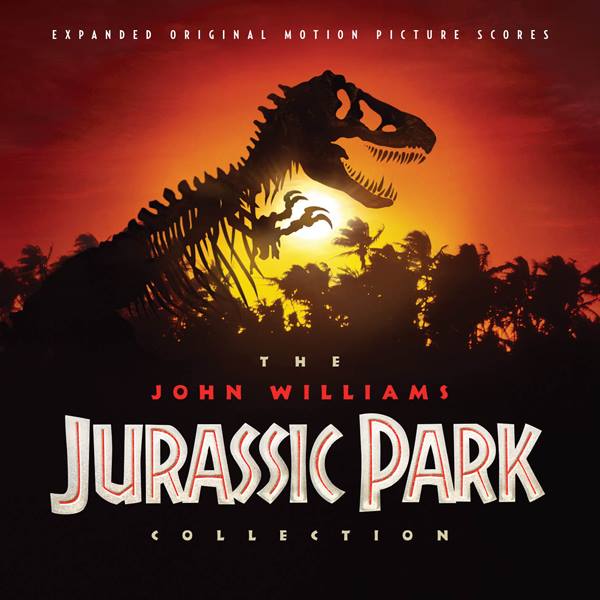 While writing this post I listened to the extended version of John Williams' The Lost World: Jurassic Park which has made me want to get my Retrosaurus on the go!

Posted by legatus hedlius at 4:16 pm