A Lewis Chessman in Shepperton and other Vikings 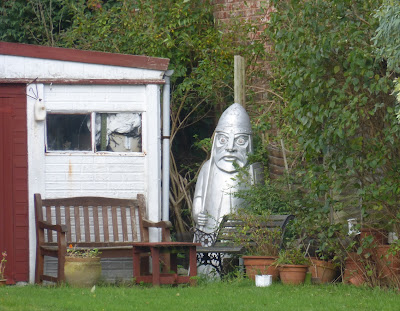 The other weekend I was out watching my son compete in the big Silver Sculls rowing event which his club runs.  Over 500 crews competing upstream (against a very strong current and strong wind) from Walton to Weybridge on the River Thames.  Walking along the river bank on the Walton side I spotted this curious statue in a Garden on the Shepperton side of the river.  I recognised it immediately as a representation of one of the Lewis chess pieces now mainly in the British museum (some are on display in Edinburgh and there is a big argument about where they should reside).  It certainly looked rather curious, especially given its size, and I wonder how and why it got there.  Makes a change from a garden gnome, I suppose. 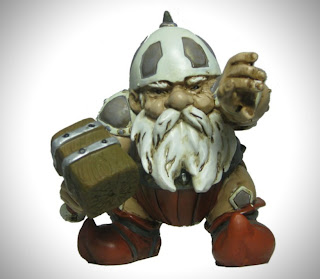 Actually, if you want a Viking Garden Gnome you can get this one which is very much from the Warhammer school of anatomy. 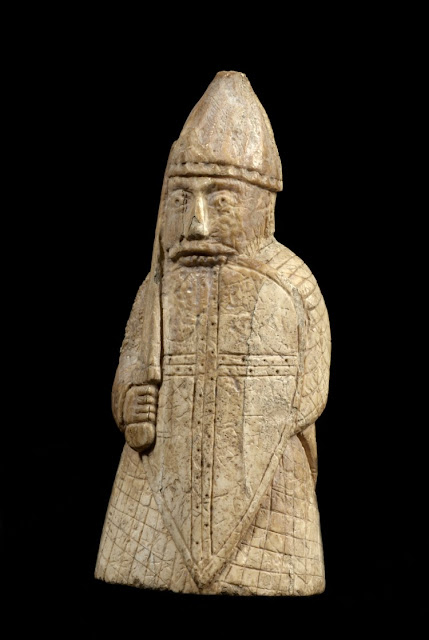 Discovered in Lewis in the Outer Hebrides in 1831 it is thought that the originals, which are mainly carved from Walrus tusk, are 12th Century and originate from Trondheim in Norway.  The late date is evidenced by the fact that the warriors have kite shields rather than the prototypical round Viking ones.  The lack of wear on them has led to the suggestion that they were a trader's stock perhaps en route to Dublin. 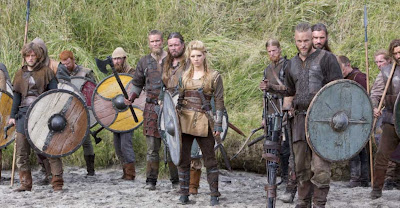 
Currently, I am watching the drama series Vikings which is grimly enjoyable.  As ever, some of the costumes owe rather too much to the whims of the costume designers (those enemies of cinematic authenticity) using far too much textured leather (the same issue as in Musketeers) although the villagers costumes look quite good. 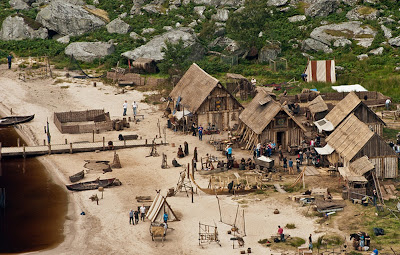 
The buildings look much better, however.  They eschew the usually depicted thatch roofs for wooden shingles.


A few years ago I went to a very interesting exhibition at the University of Oslo Museum of Cultural History on the Viking town of Kaupang. The buildings illustrated in pictures and models at the exhibition were just like the ones built on the sets in Ireland. 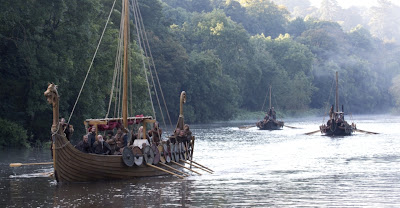 The series is filmed in Ireland although a few shots of the fjords were done in Norway.  The ships look excellent, although I winced when I saw the steering oars on the port side of the ships (er, steer board). 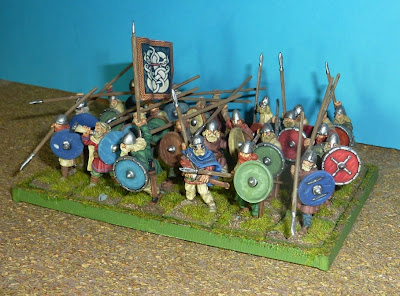 Gripping Beast Vikings were the first 28mm metal figures I bought and I have a number of them, plus some Artizan and Foundry ones.  I painted most of these a long time ago, probably the earliest ones were in the late nineties, but I could probably tidy them up fairly quickly. 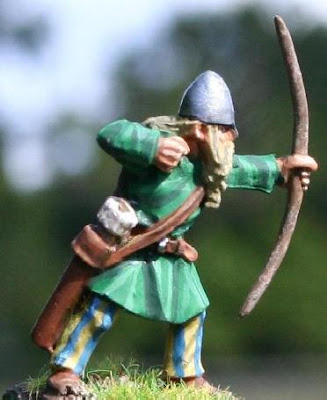 I suppose the ideal rules for Vikings would be Saga, which I have got, although it seems a little too "gamesy" for me.  Something like the Games Workshop Lord of the Rings Battle Companies rules might work well.  I'm also tempted by a larger Lion Rampant force to fight the Moors in Spain and maybe the Carolingians.  Hmm.  At least I have enough unpainted figures to not have to add more to the lead pile!

Posted by legatus hedlius at 10:48 pm