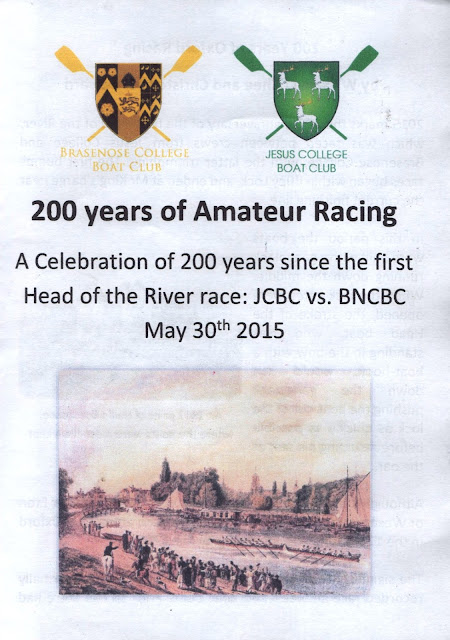 Magna Carta, Agincourt, Waterloo.  There are lots of anniversaries this year.  Today I took the non-Scottish resident parts of the family to Eights Week at Oxford; an event I hadn't attended since 1982.  This was to celebrate another anniversary: The very first rowing race between two boat clubs.  Jesus and Brasenose (the Legatus' college) are the two oldest rowing clubs in the world and their clash two hundred years ago is the first documented race between two clubs. 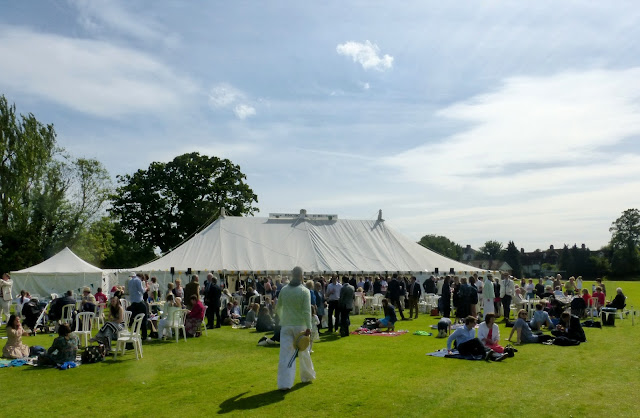 Brasenose had organised an anniversary garden party in the BNC sports ground (which used to employ a pushy groundsman called Jeffrey Archer, back in the sixties) adjoining the river.  Guy was excited to go, given he is a keen rower. 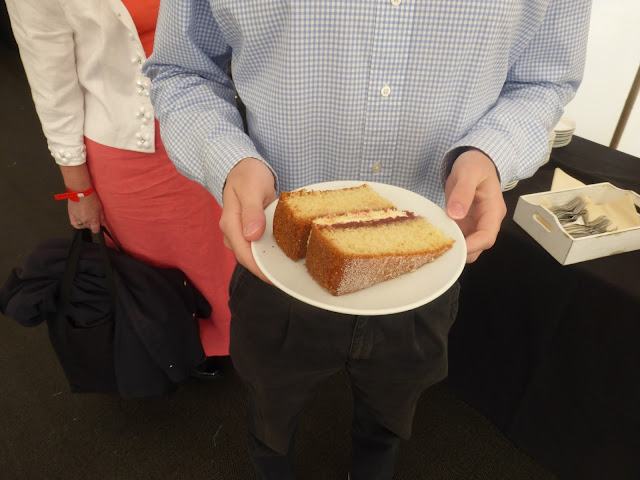 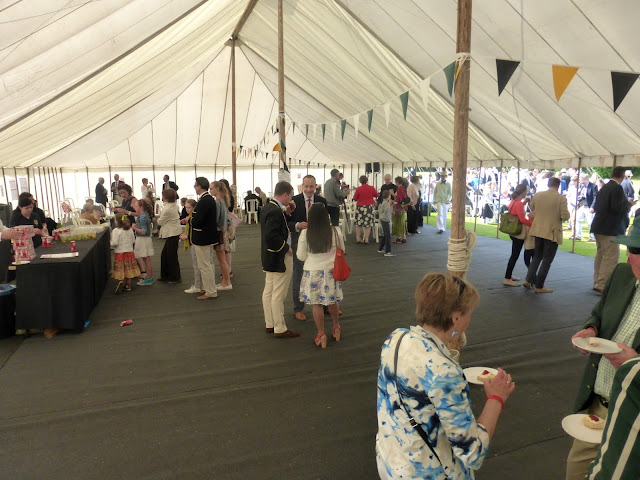 As Guy is very fit he was allowed to demolish large amounts of cake.  The Legatus is not fit but still managed to polish off quite a lot of Coronation Chicken sandwiches and tea.  Most of my recollections of Eights Week revolve around Pimm's but my dietician won't allow me to drink it these days.  Probably just as well as it inevitably led to unsuitable behaviour with lady rowers in the past. 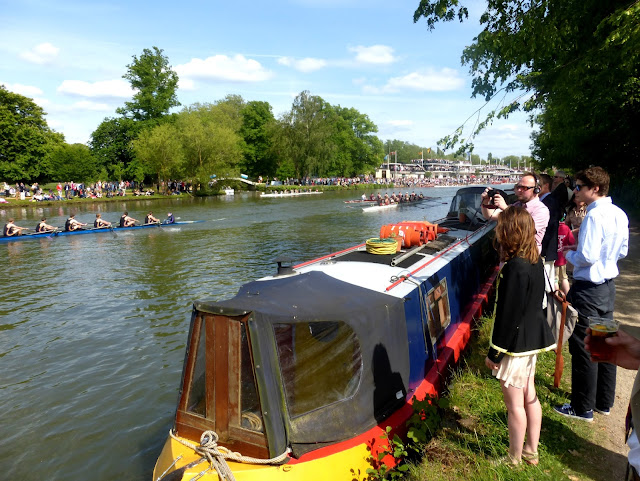 The young lady in the foreground next to Guy is wearing a BNC boat club blazer but is not built like any of the ladies I remember from the ladies first eight, who were very much on the strapping side. 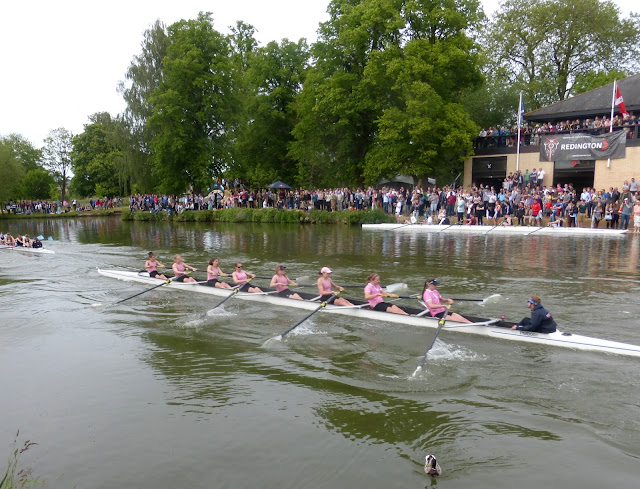 Guy wasn't too impressed with some of the rowing technique on display but Pembroke ladies displayed some impressive competitive aggression, even if they were hampered by girly pink shirts (as were their men). 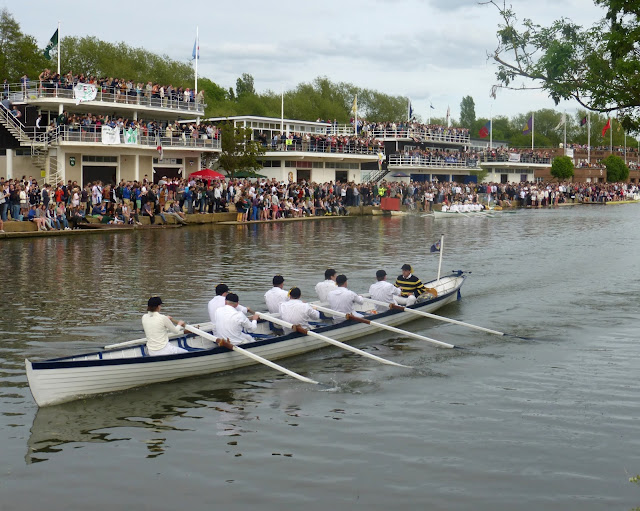 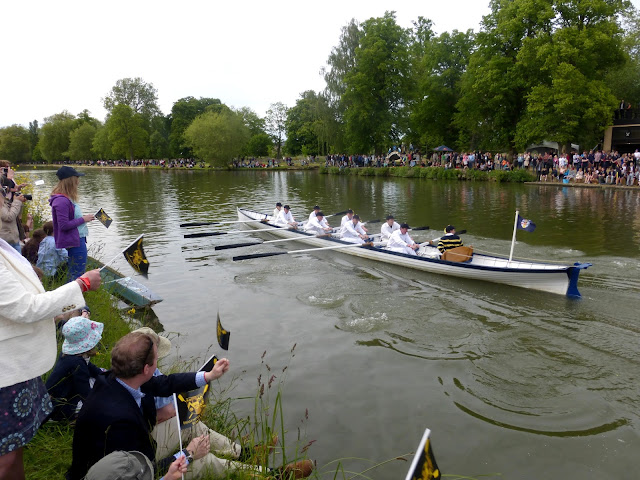 Between the women's and men's division one races the 200th anniversary race was run with crews in period boats and uniforms.  We all had BNC boat club flags to wave and there seemed to be a lot more of us than Jesus supporters.  In the end, as in the race two hundred years ago, Jesus were beaten, this time by a rather embarrassing distance. 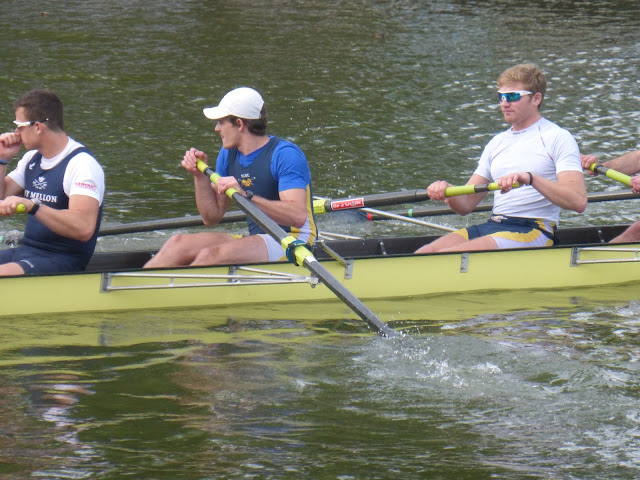 We stayed to watch the Division 1 races and Guy recognised that Trinity were fielding two of Oxford's Boat Race winning crew, including stroke Constantine Louloudis (in the turquoise sunglasses) a 2014 World Championship gold medallist.  Bit tough on some of the other crews! 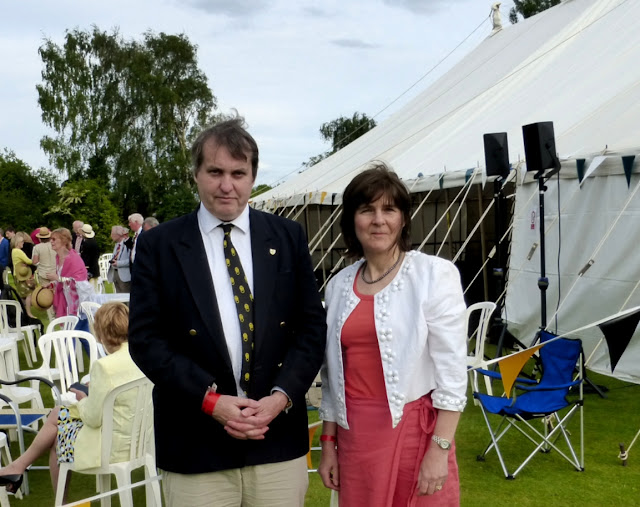 The Legatus needs to get his hair cut!

The Legatus's rowing exploits at college were all really rather more to do with a string of lady coxes and rowers from a number of colleges (including his own).  Fortunately, given the presence of the Old Bat, none of them were in evidence today!
Posted by legatus hedlius at 11:02 pm