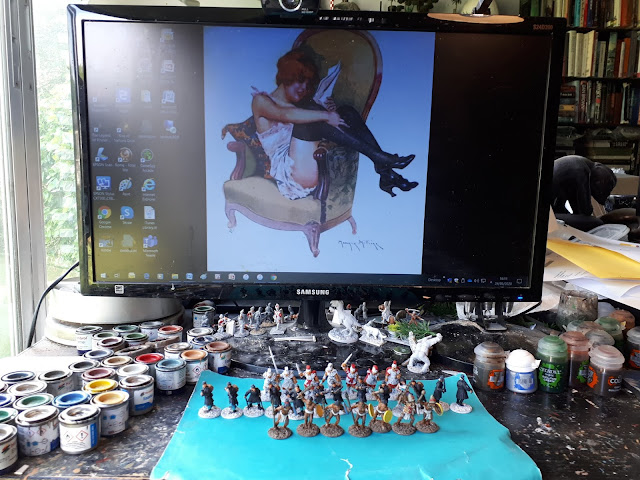 I have had a couple of good weekend's painting, Last Sunday I had a bit of a frustrating day as I wanted to finish my Lucid Eye Jaguar Tribe figures as I had painted and varnished them, however I couldn't find my superglue to attach their shields. I opened a new one about two weeks ago so know it is in my room somewhere but where exactly I couldn't fathom. Rather than wasting any more time on looking for it I decided to have a go at painting my Star Wars droids instead. 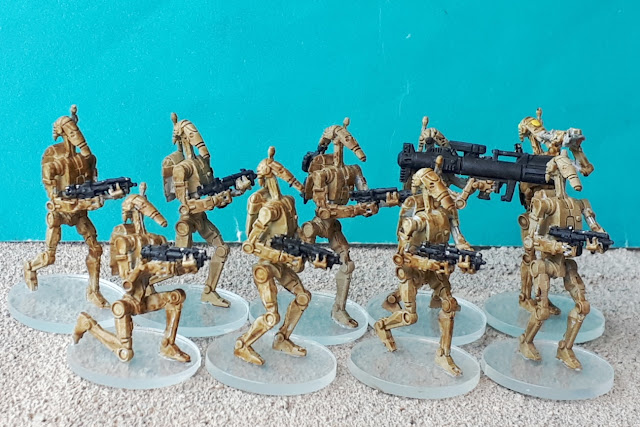 I undercoated five of them them last Saturday, so took a deep breath and painted them using a method I saw on You Tube using Citadel's contrast paint; the first time I had really used it. Given that one coat of this was enough, followed by a few silver bits and painting the blasters black, they are unique for me in that they are almost entirely painted in acrylics, The other unique thing was that they took less time to paint than they took to assemble!  I did the last four this weekend. Anyway, here they are. I didn't like the very thick plastic bases they came on so, in another first, I mounted them on transparent bases so I can use them for number of different scenarios. Now I want the core boxed game for the Clone Wars but fortunately it is out of stock everywhere!

So here are my current projects as of today. At he front re the Savage Core Jaguar Tribe and I have to just finish  then varnish their shields and add static grass.  Next I have got out the 1864 Danes again as they are well on their way and not too fiddly. A new lady pirate (see below) has found her way in there too. Behind are the next group of Savage Core figures but they still have a long way to go. 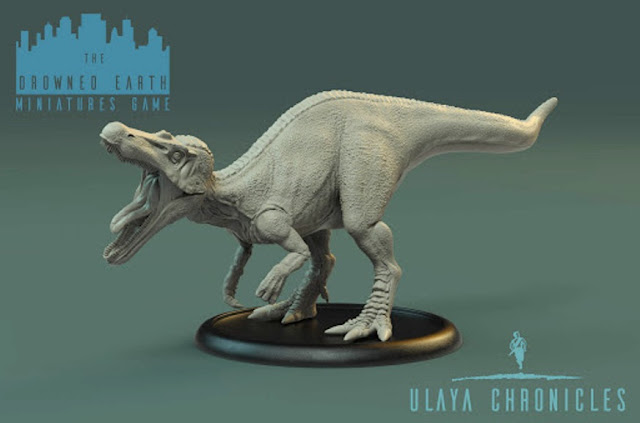 I have been humming and hahing about The Drowned Earth solo Kickstarter but it is quite expensive and we have just had to buy a new cooker. The Lockdown is seeing people work on more solo adaptions of rules, which is a good thing for me as solo play is really all I am going to be able to do, going forward. Also, I won't get frustrated with myself because I don't understand the rules and won't ruin everyone else's game by being slow and useless!  My doctor says that my dyspraxia does contribute to my inability to play games, interestingly. Maybe Savage Core is enough.  Perhaps I will just buy their Baryonyx model, as it is the local dinosaur!

The Drowned Earth Kickstarter is going tremendously well (they don't need my money) and they are now planning to include a big herbivore. They were having a poll to choose between a ceratopsian (not a real one; an imagined one) and an ankylosaur and the ceratopsian has won, Why no love for ankylosaurs? There are plenty of toy triceratops' and styracosaurus' on the market but I have never seen an ankylosaurus.  When I was little it was a very popular dinosaur. 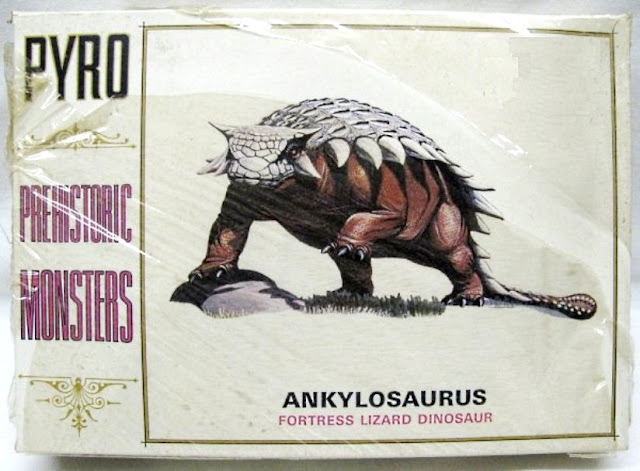 Ankylosaurus seems to have fallen out of fashion, sadly. I am not up to date on the surprisingly fast moving world of fossil classification to know if it has gone the way of brontosaurus and been removed from prehistory. Or maybe it is too hard to mould? I had one of these model kits when I was little. I took the cover illustration rather literally and painted it a lovely glossy chocolate brown with a nice silver top. 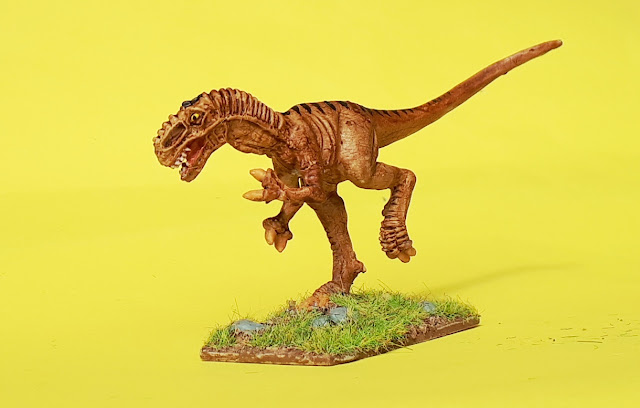 Of course I have also bought into the Jurassic World Kickstarter, so that will be enough dinosaurs for a while.  I had this small Copplestone Castings nanotyrannosaurus on my desk and on Saturday I painted it start to finish. Good dino practice! It's about 9 cm from nose to tail so would also work as a bigger beast for my 18mm fantasy figures. Maybe the Antediluvian retrosaurus next!

I have had another Kickstarter arrive in the form of some figures for Pirates of the Dread sea. I didn't bother with the rules but just went for the human and skeleton pirate figures as I still harbour (so to speak) a desire to do some Pirates of the Caribbean the Online Game type, skirmishes.  As usual I will saw off most of the slot so I can mount the figures on washers like my other pirates.  They are big figures compared with my Foundry ones but match very well with the Black Scorpion ones I have.  The Contrast Paint I used on the droids should work well on the skeleton pirates. 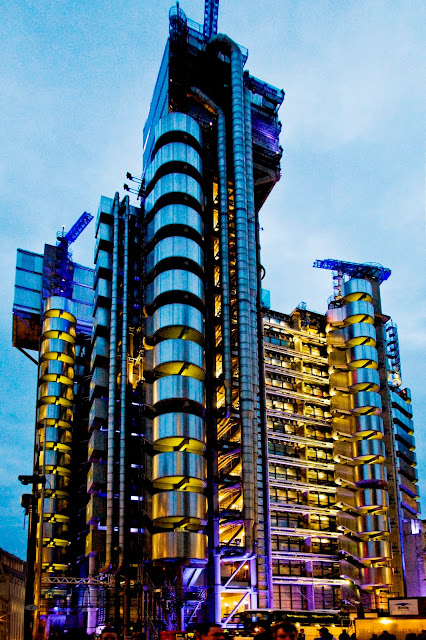 Where I used to work. The Old Bat asked architect Richard Rogers where she could get a model of it for our wedding cake so he got his studio to build one: one of only four architetcts' models of the Lloyd's Building in the world.


I am now officially a pensioner, as I got my first monthly payment from Lloyd's of London this week. It certainly helps towards the household bills, which I need with three non-contributing parasites living here (well, alright, the Bag for Life contributes a bit). The Old Bat has been off work for so long that she no longer gets sick pay and isn't entitled to statutory sick pay. Never mind, we won another contract on the back of the one we are working on at the moment, which is something.  Guy, at least, has got his contract for his first job in September, which is better than some of his other friends who have had their offers withdrawn due to the Chinese wrecking the economy. 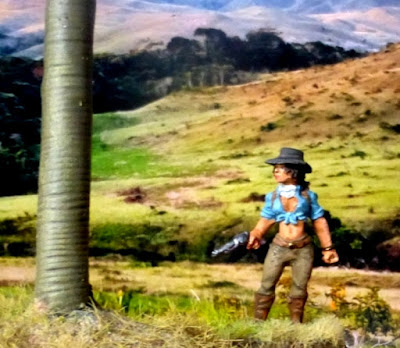 I am working my way through the trashily enjoyable Arthur Conan Doyle's The Lost World on Amazon Prime and I really must get some Lost World tribe of the week games worked out.  All the sets look like theey are made of MDF anyway,  Although Jennifer O'Dell's, jungle girl Veronica is the obvious sex symbol, I find myself strangely drawn to the Rachel Blakely character (perhaps because she is a better actress). She certainly contributed to my colour choices for the Lucid Eye female explorer I painted a few years ago. 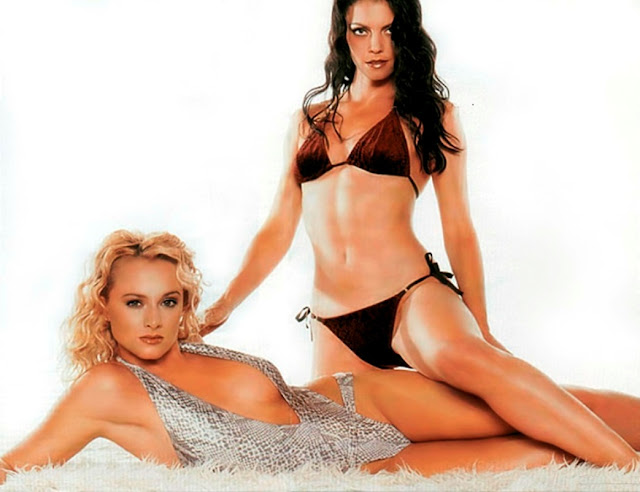 
The two actresses posed for this particularly effective picture back in the show's heyday (if, indeed, it ever had one).  Which reminds me, my second collection of Facebook Lockdown Lovelies is on my Legatus' Wargames Armies blog here. I am running a long way behind because these posts take ages to do!  Rather than posting pictures of actresses from the past, as I have been doing, many are doing things like putting up pictures of their ten most influential albums, I realise how poor my comprehension is of pop (and especially rock) music when I see these. In most of the ones I have seen so far I don't even know the artists let alone having heard of the albums. Maybe one day I'll put mine on here. Not that I can ever choose ten of anything in these type of things and they would vary from month to month, of course. 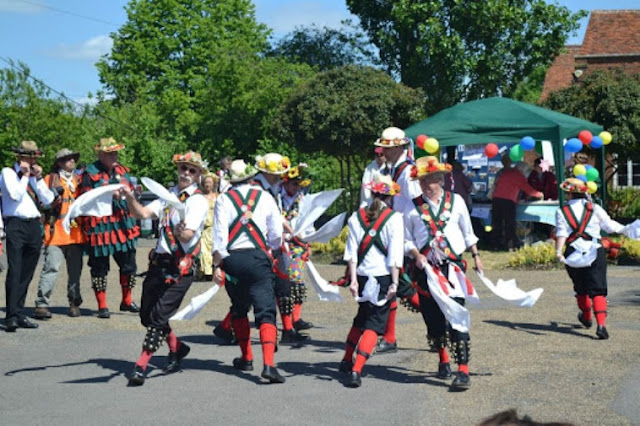 First random annoyance of the week is...people who describe other people as 'folk'.  Folk? Really? I just find it a very odd and old fashioned term. It just engenders a vision of people dancing around maypoles in some yokel part of Britain wearing big hats and chewing straw.  No doubt the whole folk music and Morris dancers thing interpolates itself into it. The term seems more popular in America and, perhaps, up North (I do not study Northern culture if it can be avoided). It's like using 'personages'.  It's also like the way American call drinks 'beverages'.  I have no rational explanation as to why these annoy me but they do!

Second annoyance of this week are people who write LOL after a supposedly amusing comment they have made on Facebook. Almost without exception the comment is not amusing but people feel that they have to be funny even if, like me, they have no sense of humour. LOL, appalling netspeak though it is, should be used as a reaction to someone else's comment, not your own. It's like those tragic celebrities who clap themselves on TV shows or people who laugh at their own supposed witticisms, like Eurosport's annoying cycling commentator Carlton Kirby. Oh, he does think he is amusing. but he is just annoying. Grrr! 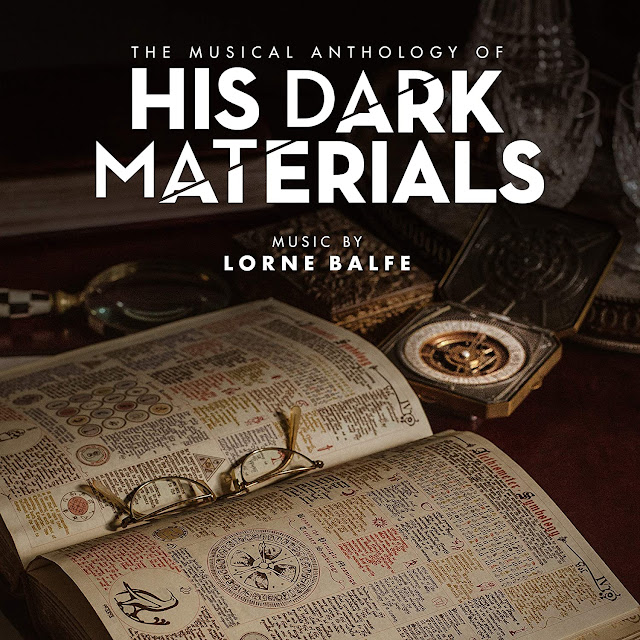 Anyway. today's album is His Dark Materials by Scottish composer Lorne Balfe, one of the Hans Zimmer school. I really enjoyed the TV series although I have no knowledge of the books and haven't seen the film The Golden Compass (2007), which covers the same story, even though my old college appeared in it.  Interestingly the music was written before the TV series and is more in the way of a stylistic dry run for the actual soundtrack which I then had to acquire too. Atmospheric stuff but more suitable for painting steampunk figures to, I think. 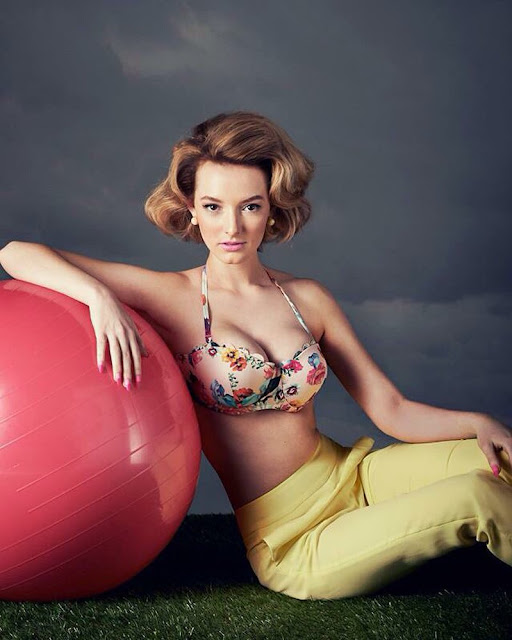 
In the feature film, the young heroine, Lyra  was played by Dakota Blue Richards, who I only remember from the Oxford-set detective series, Endeavour. She is the type of actress who reprehensible Fleet Street photographers always seem to want to pose in profile. 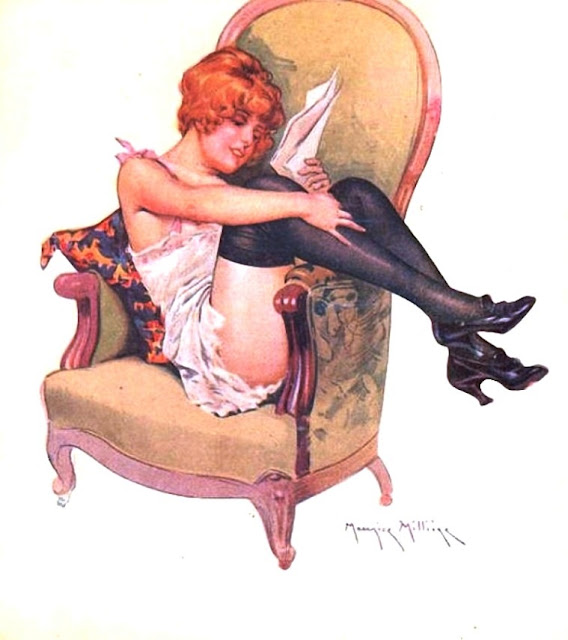 Today's wallpaper is an illustration by Maurice Milliere (1871-1946), Born in Le Havre, he received most of his artistic education in Paris, where he became a top illustrator for magazines like La Vie Parisienne and  Le Sourire. He, essentially, developed the genre of what would become pin-up art, with his saucy, under-dressed, young. modern ladies about town and was a great influence on pin-up master Albert Vargas.
Posted by legatus hedlius at 4:40 pm