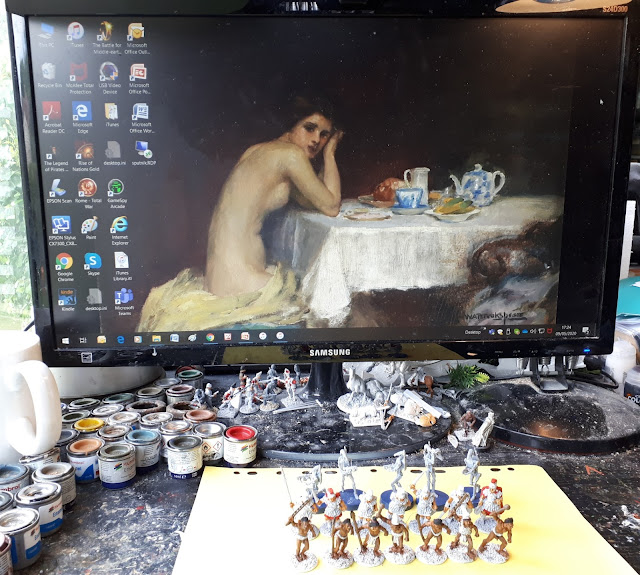 I'm carrying on with my three projects at a time approach, so my current work is some Savage Core Jaguar Tribe and Atlanteans and some Star Wars Battle Droids.  The Jaguar tribe are coming along and I did a bit on them today but they have fiddly shields to do so they will not be done this week, I think.

Yesterday I finished twelve warriors of Rohan from the Fields of Pelennor boxed set. I had to find the shields which were in the box and was depressed at how many figures there are still to paint, considering I did army of the dead and orcs a year and a half ago!  I had more varnish problems with these. Some time ago I switched to Vallelo polyurethane matt varnish as the Humbrol was drying and leaving white patches. However this time the Vallejo didn't not dry matt on some paints I had used a Citadel shade on. Frustrated I stirred some Humbrol for twelve minutes and put it over the shiny bits. Seemed to be OK but was still leaving the odd white patches which I had to paint over.  I wish there was a matt varnish that actually worked reliably! 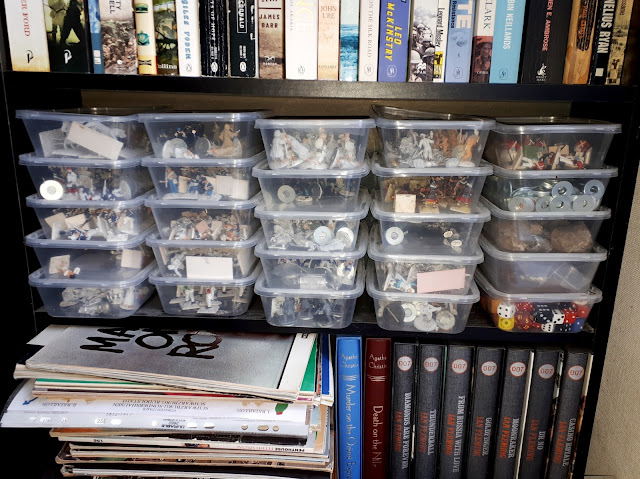 I need to start thinking about what should come in next.  Ideally, I want something that is not just started but well on the way so I can get them done reasonably quickly, as I find figures with a lot of work still to do on them rather depressing. I keep some of my most recent (i.e. the last seven years or so) figures in little plastic tubs behind my chair on one of my bookshelves.  I need to look at what is in here and see what I could push along. At present I am thinking of my 1864 Danes as there are only a few (nine?) of them and they have a quite simple uniform.  At least none of these need preparing as they are all based and undercoated at least.  However Charlotte wants me to do some riders of Rohan. I did start six some years ago but they are in a box somewhere and I don't know which box. 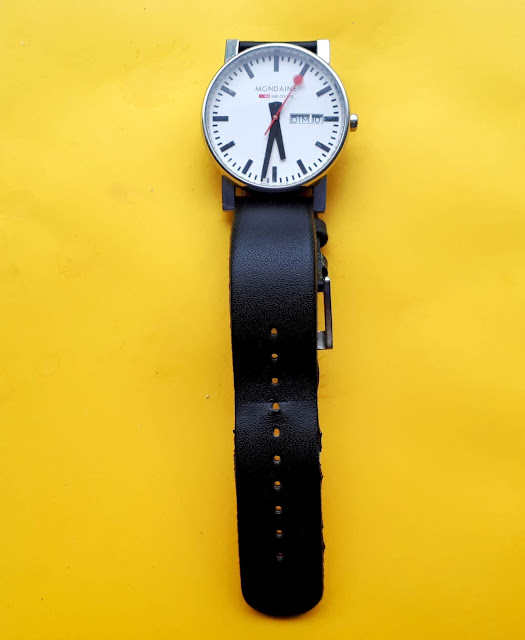 The redoubtable Mike Siggins commented on Facebook this week that he hadn't worn a watch for thirty years but was now thinking of getting one. I find this very peculiar. I have worn a watch every day since I started senior school at eleven. I really cannot understand people who say that they have the time on their mobile phones. So, when they want to see the time they have to get their phone out of their pocket and look at it (and maybe even unlock it first), as opposed to just a quick flick of the wrist and there it is. Also what if the sun is out? Then you can't see anything on a mobile phone screen. Do people then have to find a tree to stand under? Also I cannot see the numbers on my phone as they are so small, so then I would have to get my glasses out too. Hence why my everyday watch is this one, as it is so clear. I went to a meeting once at a big architects firm and they were all wearing this watch (based on the clocks at Swiss railway stations) as it is a design classic! One more thing, of course, I don't usually carry my mobile phone on me as I don't want it microwaving my brain every hour of the day. Mostly I forget to charge it up too. 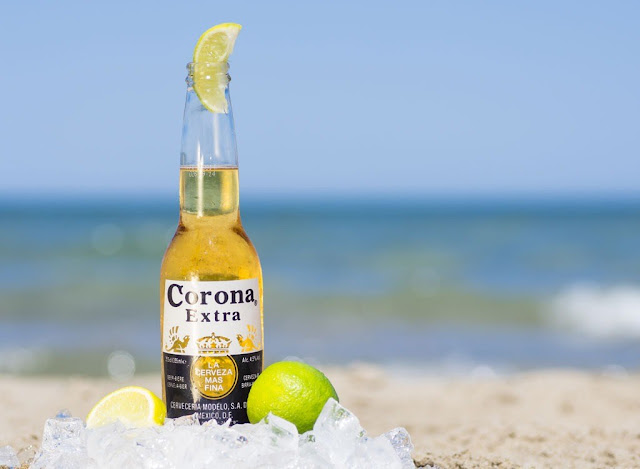 This weeks annoyance is people drinking beer out of bottles. Again, just why? I have been watching several US TV series lately and I'm sorry but I think men drinking from silly little beer bottles looks childish or even, he said, not worrying about being politically incorrect, effeminate. They look like they have baby's beakers as they sip, sip, sip ineffectually. The worst example, oddly, is the otherwise estimable Perdita Weeks in Magnum. When she does it, obviously to look like one of the boys, she looks very uncomfortable doing so.  She purses her lips and tries to sip, sip sip, a tiny amount of beer. Glasses is what you need for beer. Big glasses so you can get a proper mouthful not a baby beaker serving. Cognac is for sipping. Beer is for quaffing! And as for that idiotic idea of sticking citrus fruit into the neck of the bottle to restrict the flow even more and make the beer taste like washing up liquid. Really. That is why you live in a Third World country, Mexicans! I absolutely refuse to drink beer out of bottle! 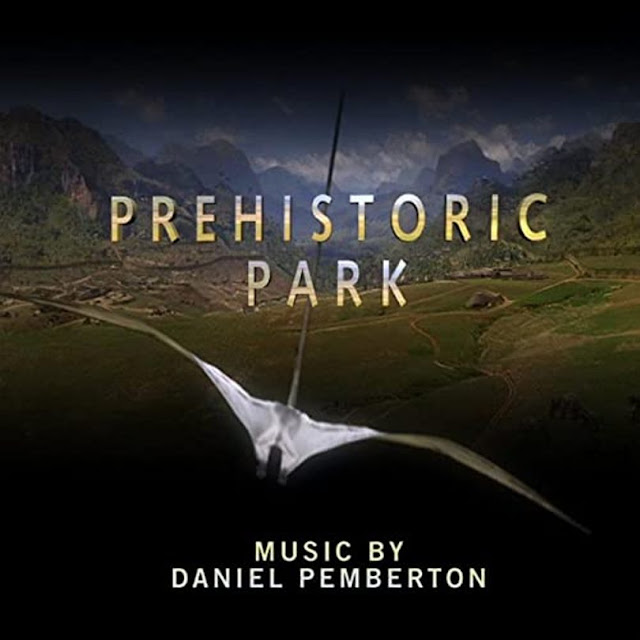 Today's music is the soundtrack to  Prehistoric Park by Daniel Pemberton, who went to the same school as I did. It goes very well as background music when painting Lost World type tribesmen. Speaking of which, I have discovered I can get Amazon Prime on my TV. This has been available for years for me but I didn't know how to do it but Charlotte set it up so she could watch Shaun the Sheep: Farmageddon for her birthday. The Old Bat watched it too but as she walked out of Star Wars and has never seen another science fiction film in her life all the in jokes were totally lost on her. I have always wanted to watch the Man in the High Castle but instead I am watching Arthur Conan Doyle's The Lost World. Excellent! Dodgy CGI dinosaurs, the same location as I'm a Celebrity Get me Out of Here, lots of Australians with equally dodgy English accents and tribe of the week (no more than twenty of them) in a forty foot across set.. And, of course, Jennifer O'Dell in her little leather outfit and Rachel Blakely looking lovely too. I wonder what Conan Doyle would have thought of it? I wonder what he would have thought of his estate taking the money and running, as well? 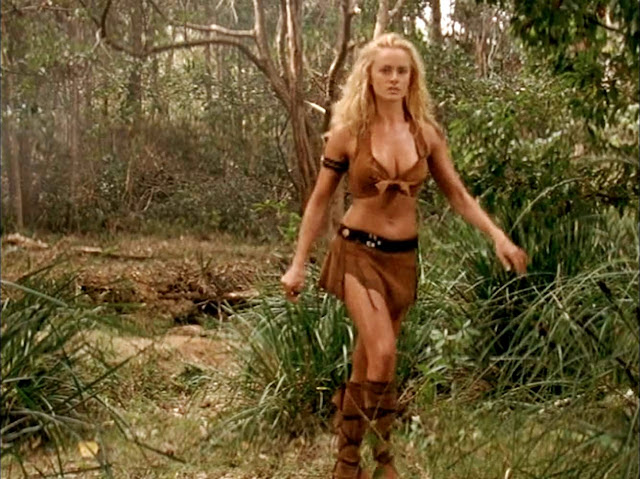 Oh, alright here is a picture of O'Dell as Veronica (a name which holds a lot of resonance for the Legatus). She designed this outfit herself so was not exploited by the costume department as you might think. As the credits say, ' befriended by an untamed beauty'. Apart from her hair, that is, which is always tamed to within an inch of her prehistoric curling tongs. 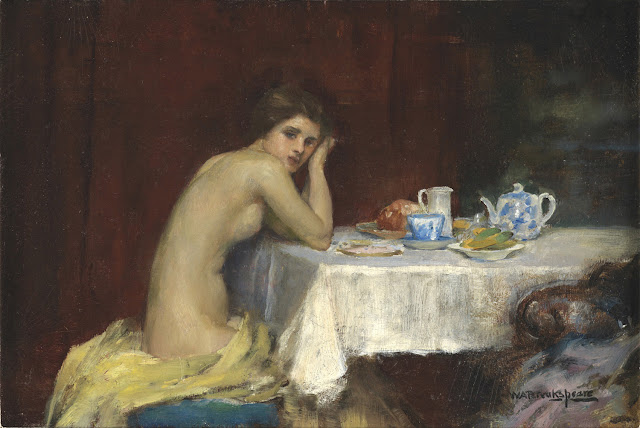 Today's wallpaper is this lovely breakfast time study by William Breakspeare (1856-1914) from Birmingham.   Not a very well known painter but he exhibited at the Royal Academy Summer exhibition eight times and studied in Paris for a time.
Posted by legatus hedlius at 6:44 pm