Bernard Cornwell's Azincourt to be filmed 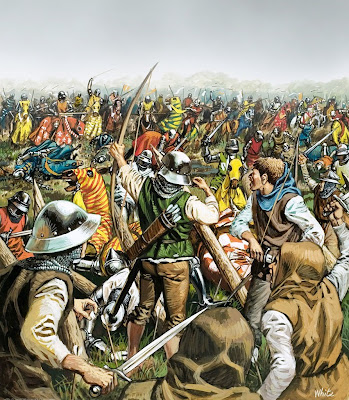 John, from Wargames Club, has just sent a note around saying that Michael Hirst, the man responsible for The Tudors (for heaven's sake) has been hired to write the script for a film based on Bernard Cornwell's Azincourt (which I haven't read yet on account of the fact that I know it will lead to all sorts of prolific Perry Mniatures purchasing).
In fact, the film was announced in Variety back in July, with filming unlikely to start until 2011. That's if it gets made at all given the current climate. I suspect any firm decisions will be left until they see how Ridley Scott's Robin Hood performs. Needless to say IMDB is listing it as Agincourt; obviously the thinking being that Azincourt would be too obscure.
One good thing is that Hirst has stated that the film will stand and fall on how well the battle is done but given he only has a £28 million budget he will have to have very clever effects. He is going for a Saving Private Ryan feel to the battle rather than a Laurence Olivier one. Frankly, he would be hard pushed to improve on the charge scene in Olivier's Henry V performed by enthusiastic Irish farmers and driven on by William Walton's thrilling music.
It seems that Hirst is widening the scope of the film from just the novel by using other source material too, as he wants to include more on the respective kings in the film
I sold all my Hundred Years War books on eBay a couple of years ago. Maybe this was a mistake. Maybe it wouldn't do any harm just to buy a pack of archers...
Posted by legatus hedlius at 3:18 pm