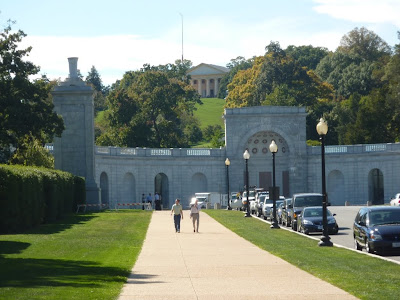 Part of the long drive up to the gates of the Arlington Cemetery with Arlington House, Robert E Lee's residence in the background

I had meant to visit Arlington the last time I had been in Washington, in March, but it proved to be a wet day and so I gave it a miss. Walking around there last week on a a sunny, but autumnal, day I was glad I did, as I think the afternoon light enhanced the place, at least as far as photographs are concerned. 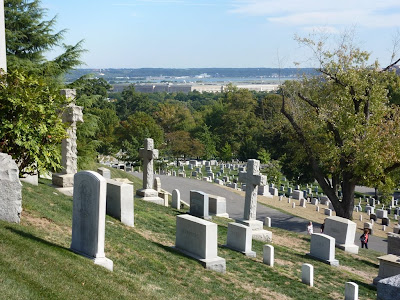 Some of the earliest graves in the cemetery overlook the Pentagon

For people who habitually push miniature soldiers around a table it is a sober reminder of the reality of war. Nearly a third of a million graves scattered throughout beautiful woods on a hill overlooking the city with approximately 20 being added every day. Even during my short visit I heard the sombre crack of the three rifle shots echoing across the site four times. A reminder that the US is at war at present. 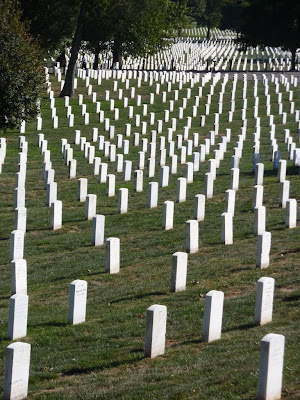 It is a large, but not overly so, site. Most visitors seem to avail themselves of the tour buses but, being English, I decided to walk the cemetary. This meant that I saw very few people as I explored the outer reaches of the cemetery. You can't help but be impressed by the ever changing vistas of identical gravestones which cover most of the site. 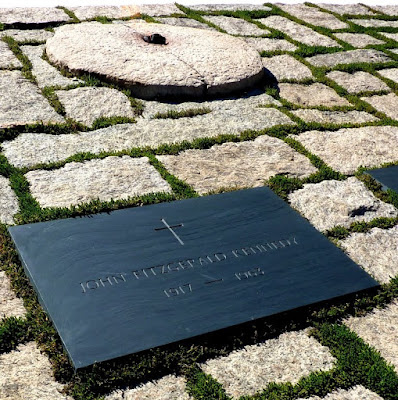 There are famous graves there, such as John F Kennedy and Jackie Kennedy, who I met once in Greece, which added extra poignancy to my visit. Amongst the vast curving lines of graves I picked one at random and researched it afterwards. 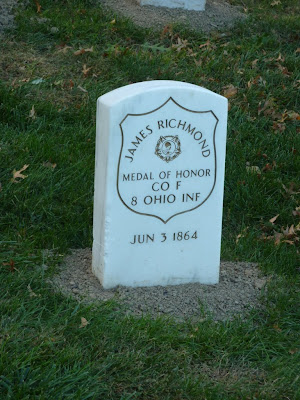 James Richmond was born in Maine in 1843 and joined the 8th Ohio Voluntary Militia, while living in Toledo, Lucas County, Ohio. He was slightly wounded at Antietam, where a Confederate bullet nicked his finger. 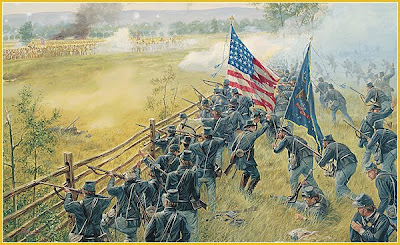 The 8th Ohio at Gettysburg
At four o’clock in the afternoon of July 2, 1863, the 8th Ohio first went into action at Gettysburg when they descended the slope of Cemetery Ridge to counter a group of Confederate skirmishers. On July 3rd, ensconced behind a rail fence they sortied against the enemy. In action against Pickett's charge and the Virginians of Col Brockenbrough’s Brigade and Brig. Gen. James H. Lane ’s North Carolinians they counter-attacked and Private James Richmond raced ahead of his unit and took an enemy colour from the North Carolinians.

On December 1 1864 James Richmond was awarded the Medal of Honour but, sadly, it was posthumous as he had been mortally wounded at Spotsylvania Court House, Virginia on May 12, 1864 and died on June 3 at the age of 21.

Very many of the graves have stories like this attached to them but I was surprised to see how many were for the wives of soldiers, sailors and airmen. 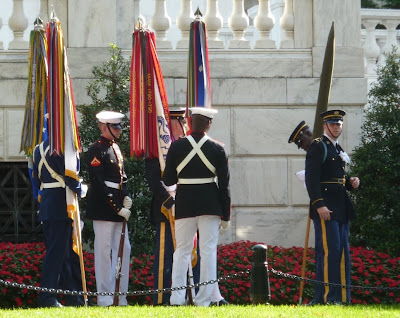 During my visit there was a wreath laying by the armed forces of the United Arab Emirates which saw the pageantry of the United States military being displayed. 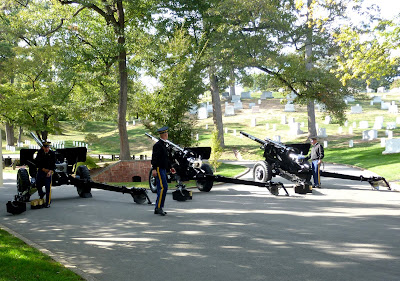 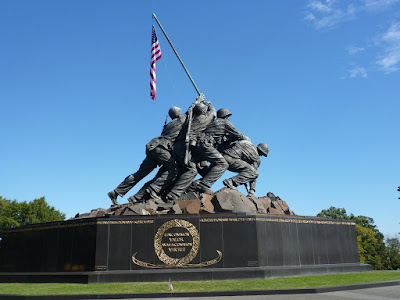 I also visited the US Marines memorial which adjoins Arlington Cemetery but is not part of it. This is a big and impressive monument with figures over 26 feet tall. I was brought up on a diet of WW2 movies featuring the Marines and my very first wargames featured my Airfix figures fighting it out on our rockery with the Marines having crossed the perilous expanse of our pond. Because of this I have always had an interest in them so was pleased to be able to pay my respects at this monument.
My family lost people in the Second World War; such as my Great Uncle who was killed in his Hawker Hurricane whilst trying to flip a V1 but it is a shame that we don't have a national equivalent of Arlington. Since the first Iraq war the US has gained a different perspective towards its armed forces whereas previously, post Vietnam, they had suffered from low public esteem. It would be nice to see more of this in the UK and a national site akin to Arlington would, no doubt, have helped.
All in all a beautiful, sobering and impressive place.
Posted by legatus hedlius at 1:15 am