My posts are starting to be, rather depressingly, only monthly.  Partly this is because the figures I have painted come from periods that have their own blog.  Never mind, as I am actually painting regularly again. So, anyway, here is this month's ramble.

Amazingly, I have managed to stick to one project for a month without getting distracted!  So far I have painted over 30 figures for my Darkest Africa Zambezi campaign, which is based on the Gary Chalk article in Wargames Illustrated last April.  Because there are so many different troop types to paint I should be able to keep my attention on this for some time, I hope.  More on my Darkest Africa blog. 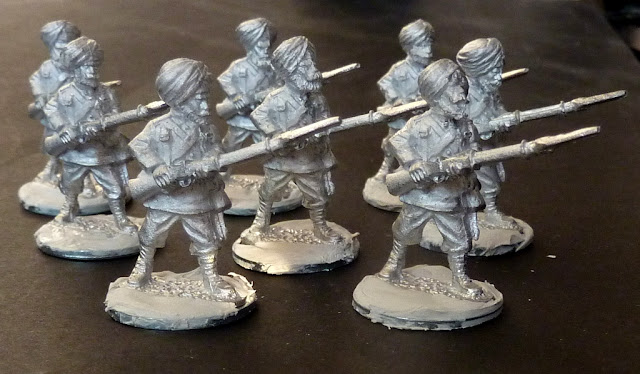 The best thing about this project is that the units are often very small. For example, after I finish the Naval Brigade the next unit ready to go are the Sikhs and their unit is only six figures. I had a few Sikh NCOs from the Darkest Africa NCO pack but needed to get one more pack of six from Foundry, so took advantage of their 20% discount over Christmas to get them and a few more DA figures I needed.  Interestingly, and this has happened before, when they arrived they were the old eight figure packs not the six figure ones that have been up on the website for years.  This obviously shows that these are not exactly best sellers if they still have stocks of the old packs.  I also picked up a big job lot of Darkest Africa on eBay which had some porters, as I found that one of my porters has mysteriously gone missing.  They've never left the house except for my first game at Guildford Wargames club (which must be at least five years ago) and I have checked everywhere else they might conceivably be.  I'll have to ask Mike Lewis if he ended up with his Belgians! 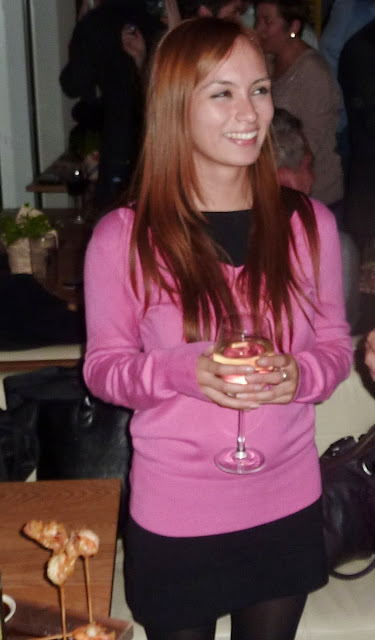 I have had a whole series of evening events to go to over the last week which has taken up any painting time in the evening.  Last night I had a reception at the law firm where Giles Allison works.  It was so boring I nearly called him up!  I did go to the more entertaining leaving party of a former colleague last week, which would have been great (especially as the lovely Sarah was there) except it was Friday night in one of those City wine bars which was so noisy you had to shout to be heard.  I must be getting old because I do not think this sort of environment is fun any more (despite the presence of some very attractive girls).  Part of the problem is that I just can't hear very well when there are lots of people in a room these days.  Added to which there was the inevitable pounding music (not very far) in the background.  Why do they have music so loud that people have to shout? 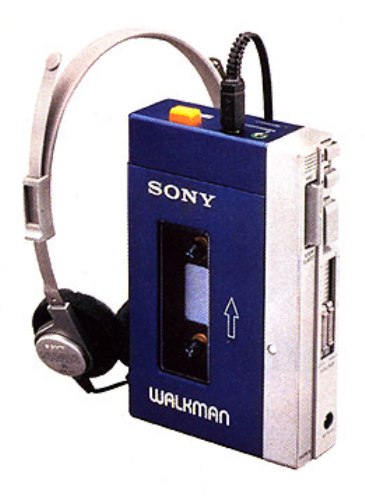 Over thirty years ago, my Uncle Wally, who was a very senior executive at Ford and a friend of Akio Morita, founder of Sony, presented me with one of the first Walkmans (Walkmen?).  Since then, and a whole string of Walkmen and now iPods, my hearing has taken such a bashing that I wander around the trendy places of the world like a zombie whose only vocubulary is "What?", "Eh?" and "Sorry?.  Tragic, really.  Still.  Mustn't grumble. 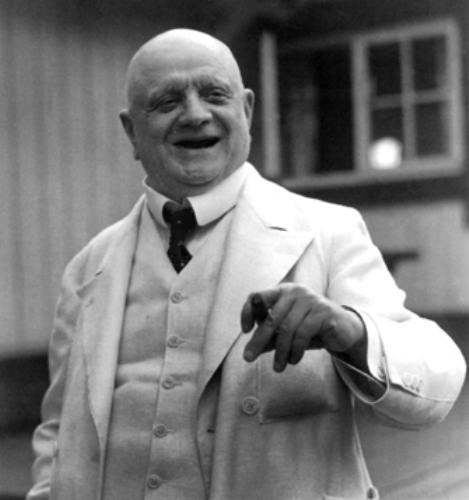 The notoriously grumpy Sibelius caught off guard in 1939

Speaking of music I have just read a biography of Sibelius, my very favourite composer.  Why I like such stark music I do not know (perhaps it's something to do with my part Nordic DNA) but he has very much the biggest classical composer section on my iPod.  One thing I did know about Sibelius before I read this book was that he was a compulsive reviser of his compositions.  They would be performed and then years later he would go back and fiddle around with them a little.  Or so I thought.  One thing I learned from the book was that there had been a recording of the original versions of my two favourite Sibelius pieces, the 5th Symphony and the tone poem, En Saga.  I downloaded this from Amazon (cheaper than iTunes as usual) and listened to them yesterday.  Having done so I realised that he didn't just fiddle around with them he chopped them up and re-ordered them completely.  The original version of both pieces contains most of the constituent pieces of both works but what now seems like, in the revised works, a coherent progression of ideas is not there at all.  The 5th Symphony, in its original form stops and starts with none of that characterstic Sibelian evolution.  It's a mess, frankly and I realise that the real genius of the composer was to take his original building blocks and reassemble them to make a much more coherent whole; something akin to clever film editing.  It just shows, as Sibelius himself admitted, that these works don't just spring fully formed from the mind of the composer but, even if the inspiration is there, still need a lot of work. 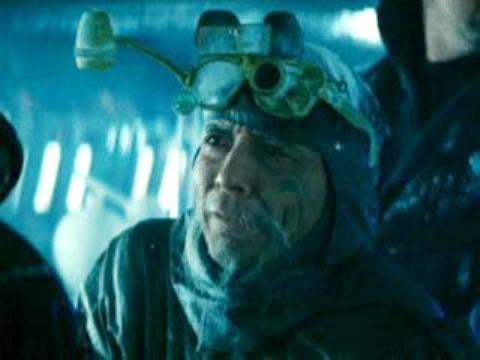 And what has all this to do with painting model soldiers?  Well, the question of revisiting old work is very much on my mind on this Darkest Africa project.  The Foundry DA figures were the very first 28mm metal figures I bought and painted and, frankly, I wasn't very good at painting in those days (ten years ago).  When I look at them now they are a bit, well, blotchy. I later discovered that I needed glasses for reading and as soon as I got these the faults in the figures were all to apparent.  I wear 1.5 x magnification for working on the computer and reading in bad light (I don't need them most of the time) and use 3 x magnification reading glasses from Boots for painting.  I looked at one of those optivisor things but found that the glasses were just as good and you didn't end up looking like a character from Blade Runner.  So now I will be repainting quite a few of my DA figures to sharpen them up.  I first did this a few years ago and was pleased with the result. 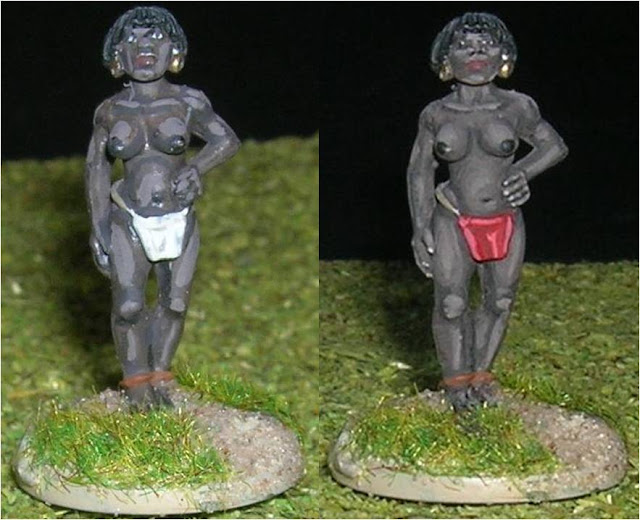 Also, at this time, I had not discovered static grass so just painted the bases green and bunged a bit of sand on them. Some people turn their bases (especially the element basing people) into little works of art but, on the whole I can't be bothered, unless it is a character figure. 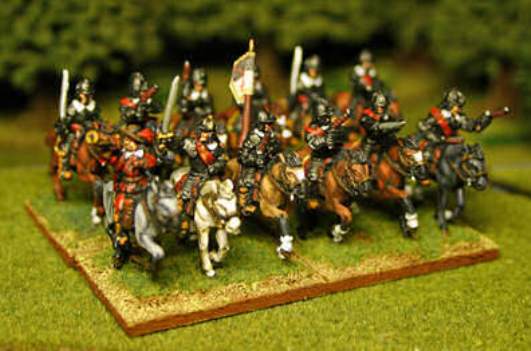 Now, I am notorious for starting new periods but am making some effort to get rid of figures I am never going to paint. However, I still have this hankering to start a Thirty Years War army.  This is patently ridiculous as I still have hundreds of ECW figures I haven't painted but I was thinking about it again when I saw a new range of 15mm figures from Khurusan appear on TMP.  I don't like 15mm figures but these looked good and, given the size of many of the battles of the Thirty Years War 15mm would be a sensible way to go.  it's a new range, though, so you never know whether it will get completed (still waiting for those Swedish Cavalry from Musketeer!).

At the very least it would give me a good excuse to go back to Sweden and stay with my particular friend A, who has a lovely apartment in the centre of the old town in Stockholm.  I could then visit the Swedish Army Museum again which has quite a few Thirty Years War Exhibits, as you'd expect.  Most impressive is a model of a Swedish Army from the Thirty Years War made with what looked like 20mm figures.  It was about twenty feet across. 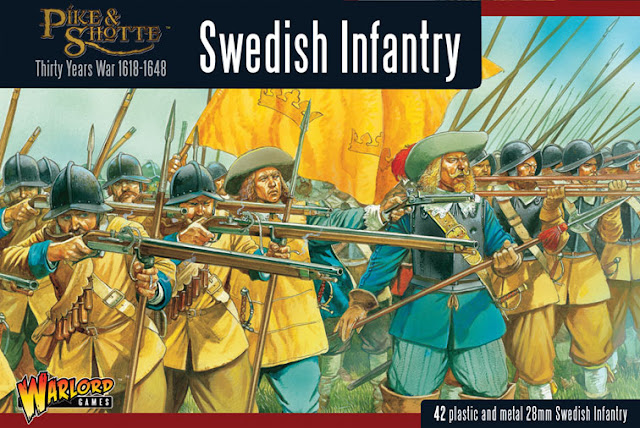 Other than the 15mm figures, however, I have also been very tempted by the Warlord Games Thirty Years War boxes; which are their ECW figures with some extra metal bits.  I really like their ECW range but they are too small to be compatible with my Renegade and Bicorne figures.  Now I know that the clothes of the Thirty Years War and the ECW were different and for historical accuracy I should go for The Assault Group's range.  I bought a few of these but Nick Collier, the sculptor of Renegade's figures as well, has gone for much smaller figures but with big heads.  The Warlord figures are much more anatomically correct.  I  actually had a box in my hands at Warfare last November but put them back.  I think that one of the issues is that I have never painted more than one or two figures from any of the boxes of plastic figures I have bought over the last few years. I don't think its their plasticness per se, as I have happily painted dozens of GW Lord of the Rings figures, but the fact that you just end up with an overwhelming number of figures in one go.  Given that I paint six figures in a good week a box with 47 figures in it engenders a feeling of utter helplessness.  Even so... 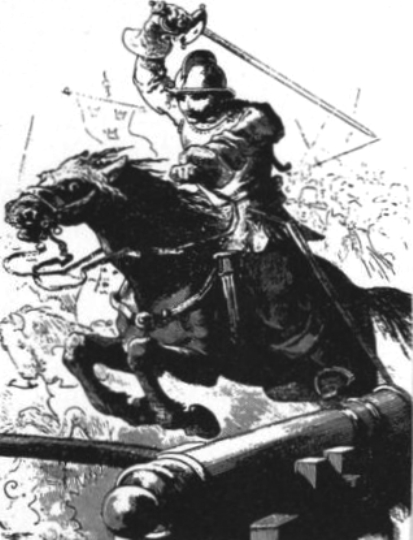 One interesting snippet from the Sibelius biography I read is that one of my favourite Sibelius pieces, the central movement, Scena, from Scenes Historiques No 1, actually depicts the activities of Finnish Troops in the Thirty Years War.  Originally a four movement piece written for a Finnish Press Pension Fund benefit concert in 1899, the fourth movement, Finland Awakes, became so popular that it developed a life of its own as Finlandia, Sibelius' most famous composition.  Scena has one of the most rousing climaxes of any Sibelius composition and is appropriately martial.

Finally, talking about plastics I have been following, with increasing disbelief, the utter nonsense (much of it slanderous and much of it racist) being talked about Wargames Factory on TMP﻿.  Its always sad when a company with good ideas runs into trouble and it seems the issues that they have had with their suppliers are very much akin to what Airfix suffered when its French suppliers were unable to deliver a few years ago, which ultimately led to them going bust.  For my part, I just ordered a few packs of their Zulus off eBay, just in case.  Plastics really do have a role in building mass armies like this which is why I am sure that I will get over my aversion to painting boxes of plastics when the Perry Miniatures plastic Mahdists come out.
Posted by legatus hedlius at 10:21 pm