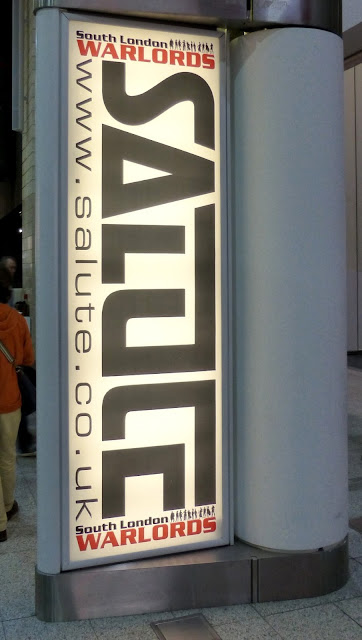 So, off to Salute again today but I have to say my heart wasn't really in it this year.  I wan't feeling at all well and this, I suspect, was largely down to the five vaccinations I had to have this week: including the rather nasty yellow fever one.  I was due to fly to Nigerian next Wednesday but, thanks to the usual top flight Nigerian levels of organisation, this has had to be postponed. I can't say I am disappointed as the flights they had booked overflew Nigeria by six hours, went all the way down to Johannesburg and then back to Calabar, resulting in a 24 hour flight plan. Hopefully, with more notice I will be able to fly a more direct route. 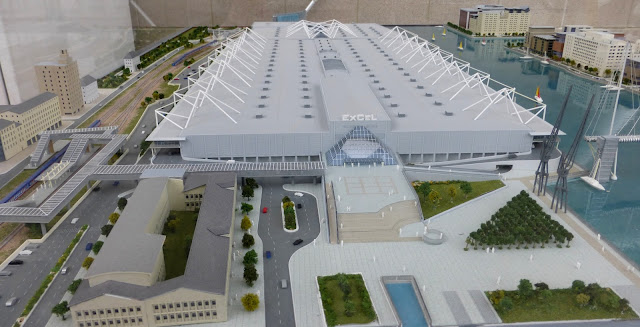 So it was a somewhat jaded Legatus who arrived at ExCel at about 10.45 this morning.  It really isn't worth turning up for doors open and I walked straight in with no queuing, although the Warlords people seemed to be having trouble with their bar scanner things. Technology, eh?  I really like architectural models and hadn't noticed this one of ExCel before but it gives an idea of the size of the place - 100 acres!  It did seem particularly crowded this year inside the show, although the DLR and the building itself were much less so, as the London Marathon Registration is next week, this year. 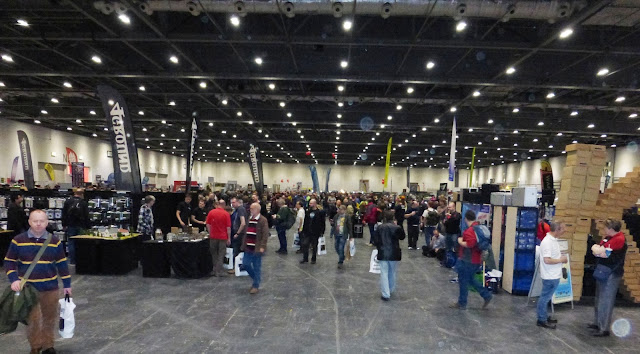 It really did make it tricky to get to many of the trade stands and as I am too old and grumpy to queue I didn't bother with the likes of Hasslefree, Crooked Dice, Perry Miniatures or Empress, all of which were heaving.  There did seem to be a lot more stands featuring fantasy and SF games this year, many of which I had never heard of.  There were two free plastic figures for a SF game called Maelsteom's Edge in the goody bag.  This is a sort of sub 40K skirmish game and, worryingly, I have already been looking at their website as I fancy some desert planet scenarios.  I was very impressed with the Sarissa Precision SF buildings I saw at the show today which would work well with this. 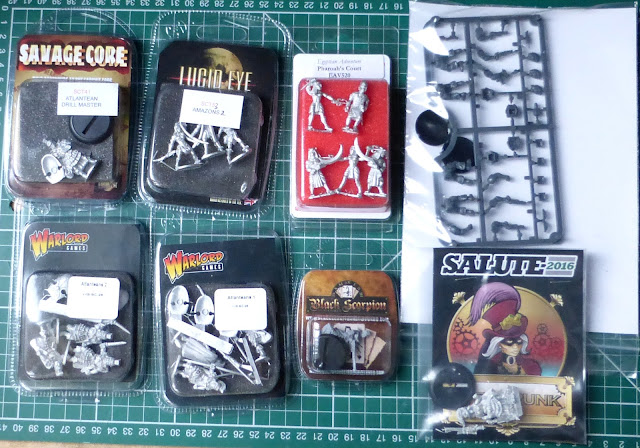 The other free figure was the normal Warlords giveaway and this time it is one I will actually paint, as the steampunk girl will fit into my IHMN ladies of the night company.  I may even start on her tomorrow as I have a paint scheme in mind.  For a Steampunk themed event I saw very few steampunk events.however.  I had a very small shopping list this year as I really do need to get rid of hundreds, if not thousands of figures which I am never going to paint.  My main acquisition was a number of packs of Lucid Eye Savage Core figures as my Neanderthals are nearly done.  I also picked up an odd set from Foundry which I hadn't even seen before, loosely based on the fighting scene featuring Rachel Weisz and Patricia Velásquez from The Mummy Returns.  I just couldn't resist that but it was my only impulse buy.  They will fit in well with my Dark Fable Egyptian Harem Miniatures.  I also picked up the Black Scorpion Salute special lady, but that was it! 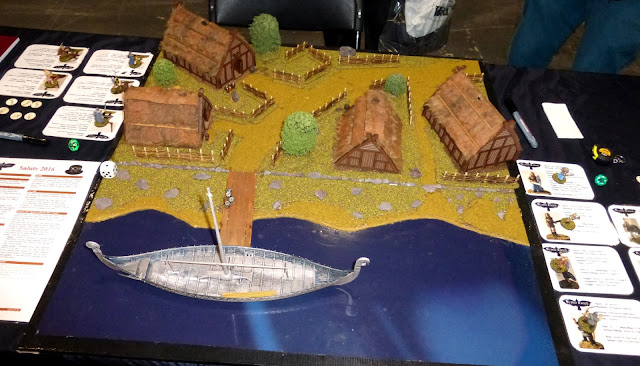 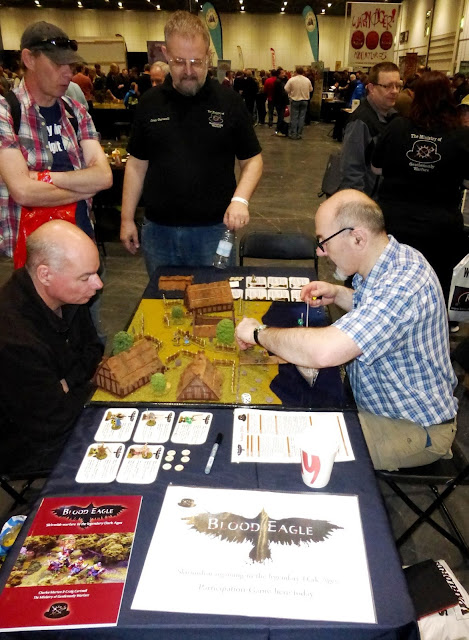 
One thing I did really want to get was the new Blood Eagle rules and it was very nice to make the acquaintance in person of Craig Cartmell, who was overseeing a game with the rules.  I really liked the small scale of the board and I have always wanted to build a small Viking village, following an exhibition I went to in a Museum in Oslo once,  This all looks very achievable, scenics wise! 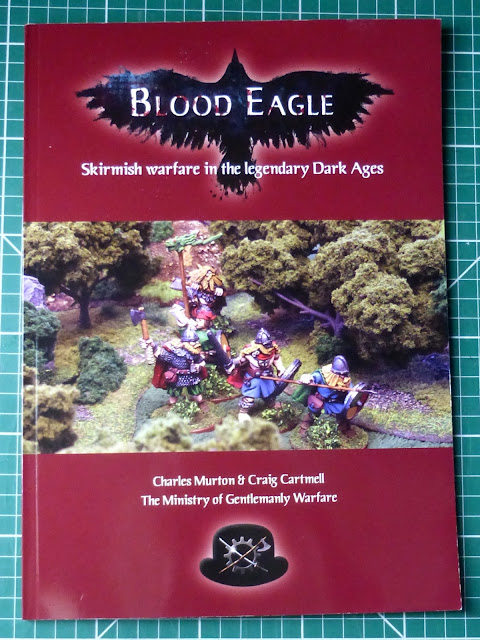 Actually finding a copy of the rules was not so easy, as they were selling rapidly.  By the time I got to Wargames Emporium's stand (Ainsty Castings had already sold out) there were only about five copies left.  Still, they look a lot easier to understand than Saga.  Looking at the huge Gripping Beast stand I wonder whether they might as well just rename the company Saga, as that was really all that was apparent. 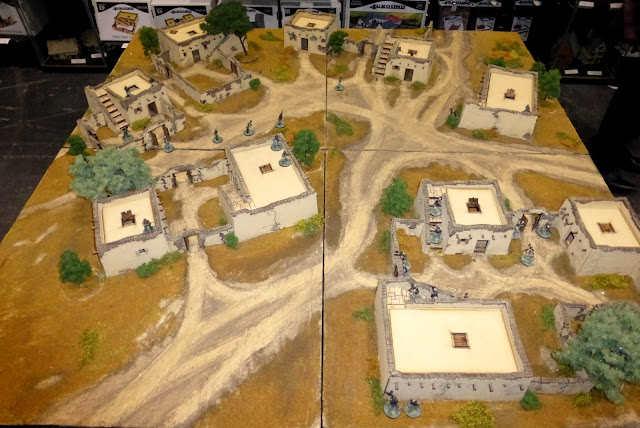 One of the things I like to use Salute for is to look at things I am interested in to see them in real life.  I had not been very impressed with 4Ground's Arab houses in the pictures I had seen of them so far but actually they are very nice indeed and would certainly work for the Sudan, nineteen twenties Egypt and maybe even Afghanistan. 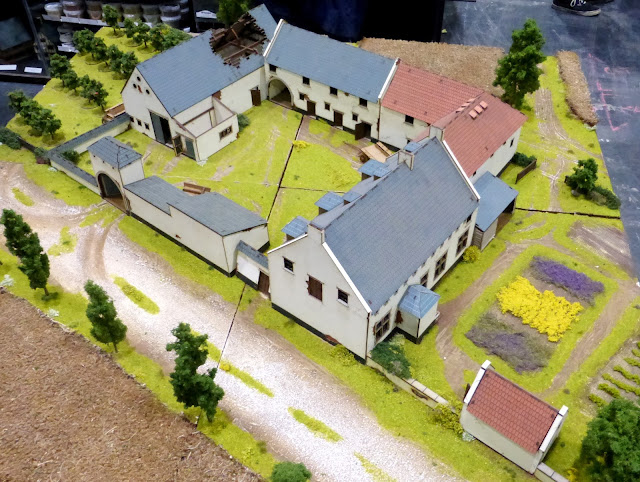 This was also the first time I had seen their La Haye Sainte model, which is huge.  I still cannot quite get rid of the idea of some Napoleonic skirmishing out of my head and the fight around this, given my old Airfix Waterloo farmhouse, may well be the way to deal with my Waterloo itch.  Should be on a hill, though!  In fact laser cut wood buildings, of which there seem to be an increasing number of manufacturers, are all much more properly in scale which means many of these buildings are very big compared with what we saw on tables a few years ago. 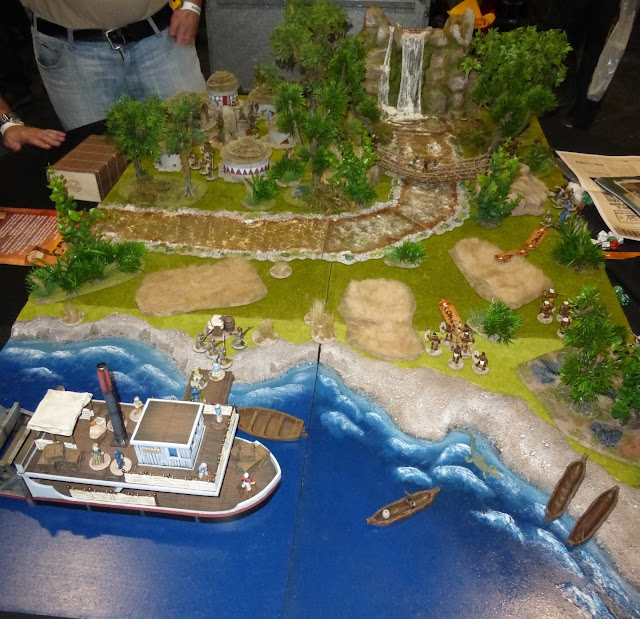 The new Congo rules were being played on a very nice Africa board and these I will certainly pick up when they come out as I have quite a lot of painted figures.  I even have a paddle boat!  I didn't get too close to the game though as it seemed to be infested with Frenchmen. 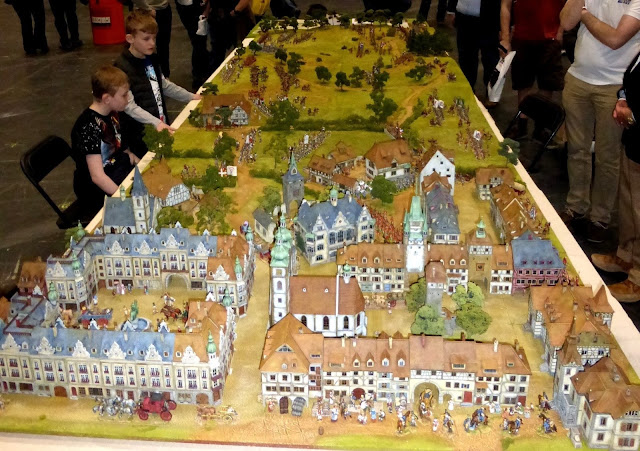 I thought that this year there were a lot more games being played on small boards and not so many showstopping giant ones.   This was my favourite, although I can't remember what it was called but I just loved the proper town at one end of the board. 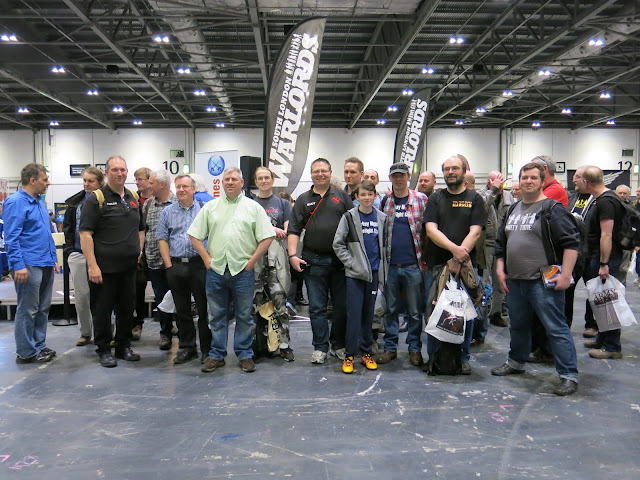 I'm second from left.  I need a haircut! From Big Lee's blog. 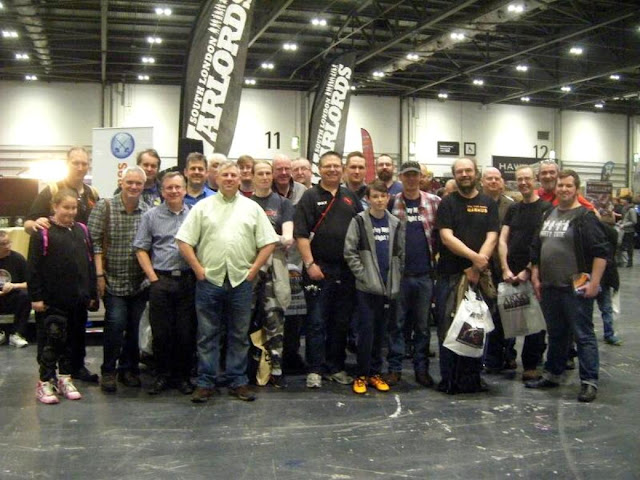 Fourth from left in this one


I did go to the bloggers meet up and hopefully we will see some photographs of that appearing soon.  There did appear to be a lot of us this year!  It was nice to meet George Anderson of the Musings on Wargaming and Life blog for the first time and catch up with Alastair who, like me, seems to be struggling with wargaming on a Monday night.  I also ran into Eric the Shed who was busily photographing every game for his blog.  His pictures are here. 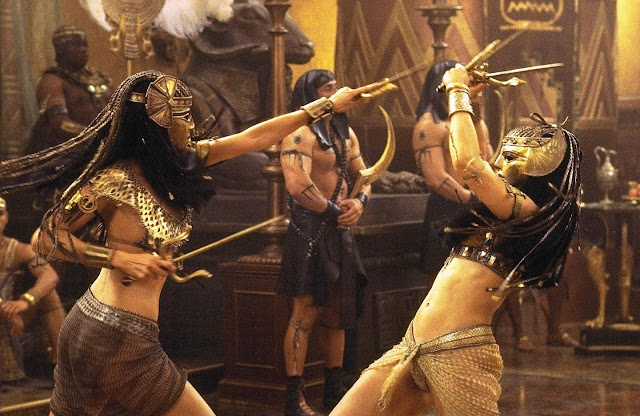 
So, all in all I was there for less than three hours this year but I got all the things I wanted and avoided being seduced by things I didn't (little metal Rachel Weisz excepted).  All in all, I added very little to the lead pile which is a very good thing!
Posted by legatus hedlius at 5:16 pm