The Legatus' mother was not what you might call a great cook.  In fact, you wouldn't call her a cook at all.  One of the abiding aural memories of my childhood was the sound of my mother scraping the burnt bits off the toast every morning. Unlike today, when busy mothers (and we have a great deal of sympathy for women who have to provide multiple meals every day for their families - it's not surprising many don't enjoy cooking) can resort to microwave meals, back in the sixties the choice of convenience food was much less.  I remember having quite a lot of Fray Bentos tinned pies when I was small and, indeed, a lot of their corned beef too. 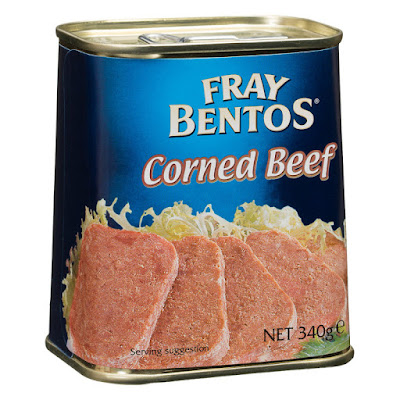 This is tinned corned beef, of course, (called bully beef by Triple P's father and everyone else who ate it in the British Army) not the sort of meat you get in a Reuben sandwich in North America, which is called salt beef in Britain.  The British version is canned, minced beef brisket with gelatin added.  There is no corn in it, of course; the word referring to the corns of salt used to cure it.  My early exposure to the words "corned beef" might have something to do with the fact that I invariably mistakenly call a pork pie a "porked" pie, as that was another sixties and seventies staple at the Legatus' house.  What would "porked" pie even mean?  Do you take a normal pie and "pork" it?  This all then then has connotations relating to delicious puddings which we won't go into. Word association being a funny thing, as to me the word "death" conjures up a visual image of corned beef being carved.  Just as the word "heath" also brings to mind the flaky shreds of corned beef you get if your knife is too blunt. I can't rid myself of these images, however hard I try.  So "politics" to me conjures up an image of small boiled potatoes in mayonnaise. This is probably why I can't take the subject or its practitioners seriously.  You look like a nineteen fifties salad (except you would probably be in salad cream not mayonnaise). 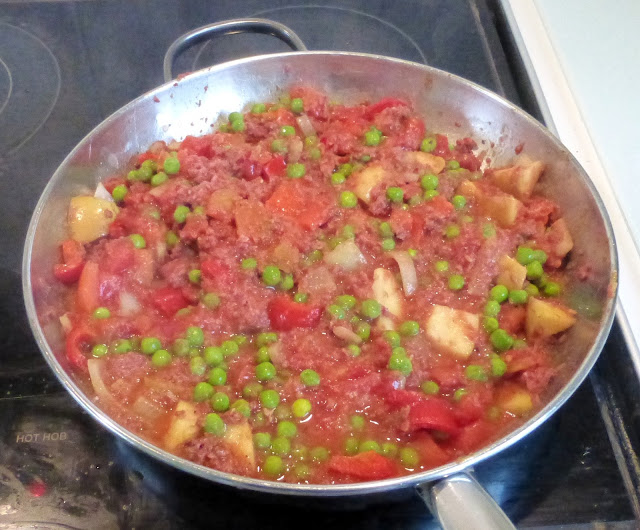 When my mother did get a bit more experimental with her cooking, in the early eighties, she would produce her notorious corned beef curry.  This was made by frying up the corned beef, chopped into small cubes, with onion, diced apple, sultanas, tinned tomatoes and curry powder.  You couldn't buy poncey miniature palettes of Indian spices to mix yourself in those days.  You couldn't even buy different sorts of curry powder.  Actually, I used to really enjoy this rather unprepossessing sounding dish and latterly I have revived it at home (although no one else will eat it in my house!) and you can find the recipe here.

I only learned about the history of corned beef when speaking to one of my Foreign and Commonwealth Office contacts who told me that Fray Bentos was not just a  company name, as I had imagined, but the firm was named after a town in Uruguay.  I had no idea, but it was the meat packing centre of South America and made a huge contribution to keeping British soldiers fed for a hundred years. The most famous story relating to Fray Bentos is about an eponymous tank in World War 1.

On August 21st 1917, during the Battle of Passchendaele, the Mark IV tank F41, accompanied by seven others, clanked and rumbled towards their objective, some farm ruins which had been fortified by the Germans,  At this time the new tanks carried unofficial names, as did certain artillery pieces and aircraft, given them by their crews.  Tanks were organised by company: A, B, C, D and so on and the practice began of naming the tanks (only the number was official).  Perhaps the crews thought that having names reflected their status as His Majesty's Land Ships but many were rather more informal than the official names used by the Royal Navy. You couldn't see the senior service allowing  a name like Crème de Menthe for example (however much they might have wanted it).  In fact, C company also had tanks called, Cognac, Chablis, Champagne and Cordon Rouge.  It was up to the tank commander to choose the name of his tank and as long as they began with the first letter of the company name and weren't vulgar this was allowed (later in the war this practice was stopped by the humourless top brass).  The commander of F 41 was Captain Donald Richardson who had been a wholesale grocer in Nottingham before the war and had held the licence to distribute Fray Bentos products, Obviously seeing the irony of meat in a can, that was what he christened F 41. 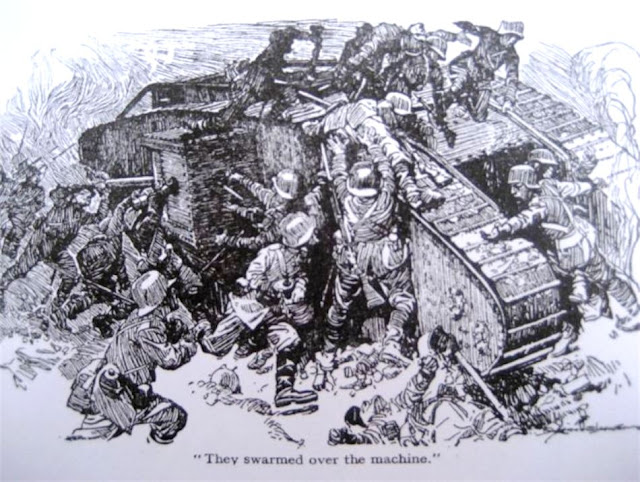 This was the crew's first time in action but soon all the other seven tanks were knocked out by artillery leaving Fray Bentos to crawl on alone and leaving its accompanying infantry behind. Unluckily, German machine gun fire entered through the driver's visor, hitting the driver, second in command Lieutenant George Hill, as well as Richardson. Hill fell wounded onto the throttle and the tank lurched into a large shell crater where it got stuck in such a way that it couldn't bring its guns to bear.  A crew member who jumped outside to release the large unditching beam to provide traction for the tank's tracks was killed by German gunfire and both he and the beam fell against the door trapping those inside.   Machine gun and mortar fire rained down on the tank and injuries amongst the crew increased as the temperature inside hit over 30 degrees centigrade..  When night fell, the Germans launched a number of attacks on Fray Bentos, being seen off by a Lewis gun fired from the tank.  One German soldier managed to get the tank door open but was shot by one of the crew.  As the battle was still going on, Richardson wanted to keep fighting from the tank for as long as possible. The crew remained in the tank for three days having to deal with numerous German assaults and attacks with explosives. When the water ran out they had to drink the acrid water from the tank's radiator.  Their food had run out and ammunition for their small arms was running perilously low.  Given the increasing number of wounds to the crew, one of whom had died inside, Richardson felt that they should make a break for it on the third night.  This they did and escaped back to British lines, having been in the tank for 72 hours, carrying their Lewis guns with them, to deny the Germans the weapons. They became the most decorated tank crew of the war, with Captain Richardson and Lieutenant Hill both receiving the Military Cross and the rest of the tank crew being decorated as well. 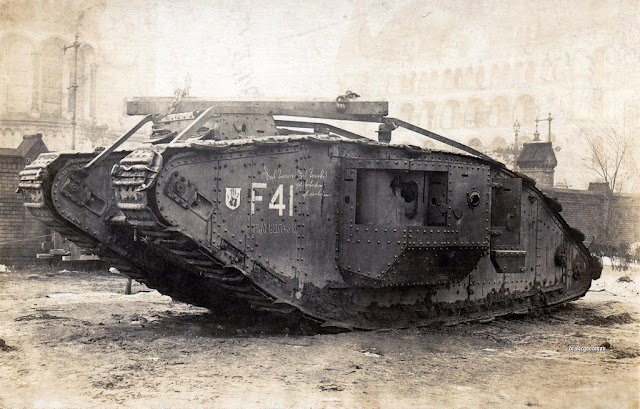 
Richardson, after recovering from his wounds, was given command of another Mark IV, also given the number F41, which he christened Fray Bentos II.  This took part in the great tank assault at Cambrai but was also knocked out.  This time Richardson got out more easily and the damage to the tank wasn't too bad, however.  Unlike the original Fray Bentos, which had been completely destroyed in battle, the Germans recovered it, got it running and paraded it in Berlin.  Eventually, they disassembled the tank to see how it worked. 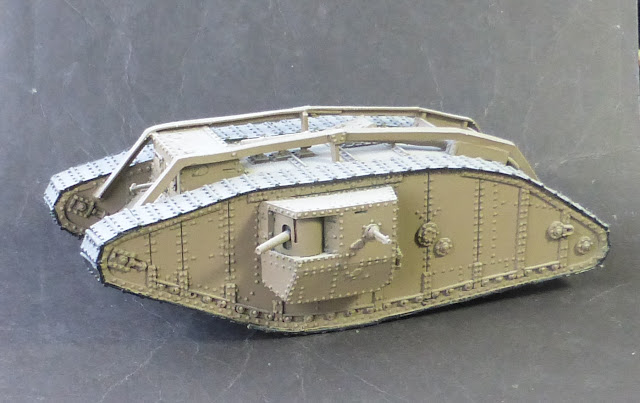 I've always wanted to do some World War 1 gaming but was really focussed on the early war period until I saw this Mark IV tank at Salute (Great War miniatures, I think).  I have actually assembled it and got the base colour down and I really should finish it, although I am not sure what I could use it for - 1920s Pulp, perhaps.  I really need to finish it! 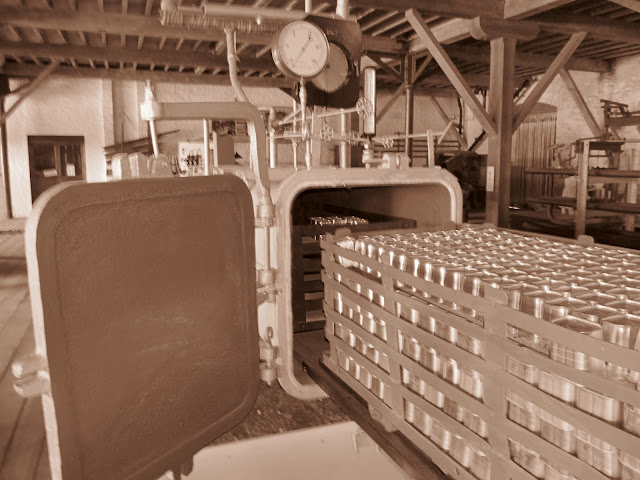 
Given this World War 1 story (and the fact that the British would fire tins of corned beef over the German lines, until a crowd of hungry German troops gathered whereupon they would follow up with grenades, rather unsportingly) it is ironic that Fray Bentos corned beef had a German origin. It was an Anglo-German firm, The Liebig Extract of Meat Company, that built the first major factory in the town in 1863.  Cattle were being killed for their skins in the area and the meat was just being wasted.

The Liebig company realised that they could use the surplus meat to produce low-cost meat products. They introduced the Fray Bentos brand in 1881. They began with a meat extract paste and then introduced a cheaper version of the product in 1899 which they called Oxo.  Interestingly, in this Olympic year, Oxo sponsored the 1908 London games, becoming the Olympics' first corporate sponsor. 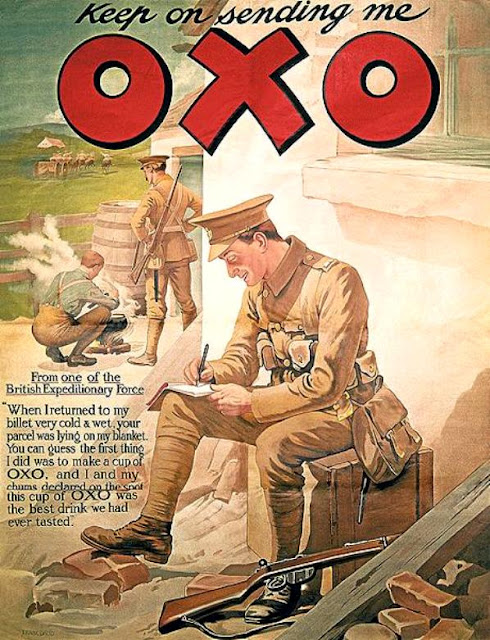 The firm took off when it started providing tinned corned beef to the British army during the Boer War.  During World War 1 their adverts featuring Oxo as a welcome warming drink on the front were everywhere. The term "bully" beef, used by my father for corned beef comes from the French name for it; bouilli (meaning boiled).  It was only in 2009 that the British army moved away from supplying British soldiers with corned beef in favour of rather less manly pasta bakes.

An appropriately bovine monument at the Liebig factory in Fray Bentos, Uruguay


By the nineteen forties the Fray Bentos factory employed 5,000 people.  It closed in 1979; never really recovering from a batch of infected corned beef that caused a typhoid outbreak in Aberdeen in the early sixties and suffering under EEC rules regarding meat imports, when Britain joined the Common Market. 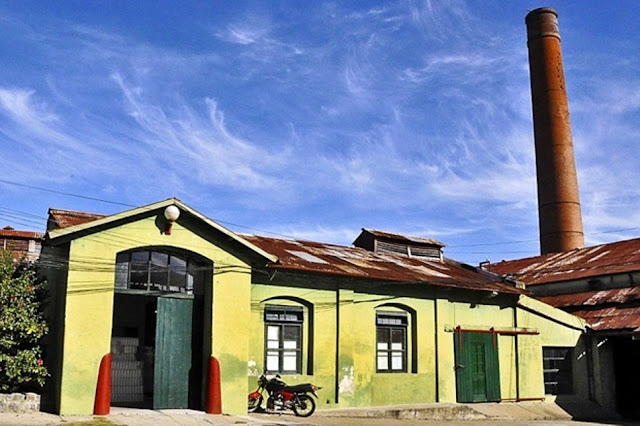 Eighty percent of corned beef sold in Britain now comes from Brazil. The factory is now a museum but recently a Brazilian firm started producing corned beef in the town again.  Last year UNESCO made the whole of Fray Bentos' industrial area a World Heritage Site (really!), saying that the existence of "the ensemble of cattle pasture and handling facilities, industrial buildings, mechanical facilities, port facilities, residential fabric and green areas linking the river and agricultural areas to the city of Fray Bentos Industrial Landscape stands out as an example of early 20th century industrial development." 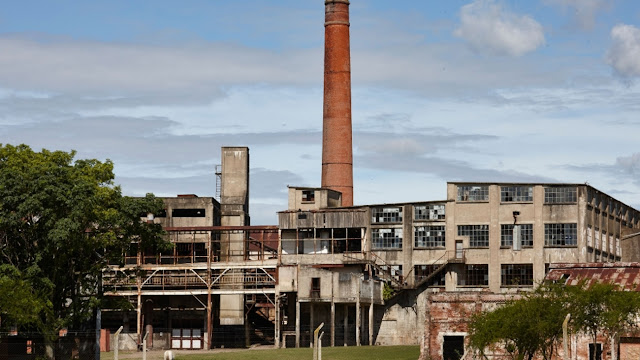 The Fray Bentos company itself went through a number of owners, The original Anglo-German Liebig firm being bought out by the British Vestey Group in 1924.  In 2011 the brand was acquired by that other canned good giant, Princes, but the Office of Fair Trading wouldn't allow the merger on monopolistic grounds and they had to sell off the Fray Bentos division to Scottish soup supremos Baxters, who have since, horrors, introduced microwaveable foods into the rather traditional Fray Bentos range.

The Legatus likes a corned beef sandwich with tomato, cucumber and piccalilli (an eighteenth century invention: originally Paco-Lilla, or Indian pickle, a British re-imagining of Indian relish).  A former girlfriend of mine, J, now the wife of one of my college friends, makes fabulous piccalilli which sets off corned beef perfectly!

Posted by legatus hedlius at 4:28 pm