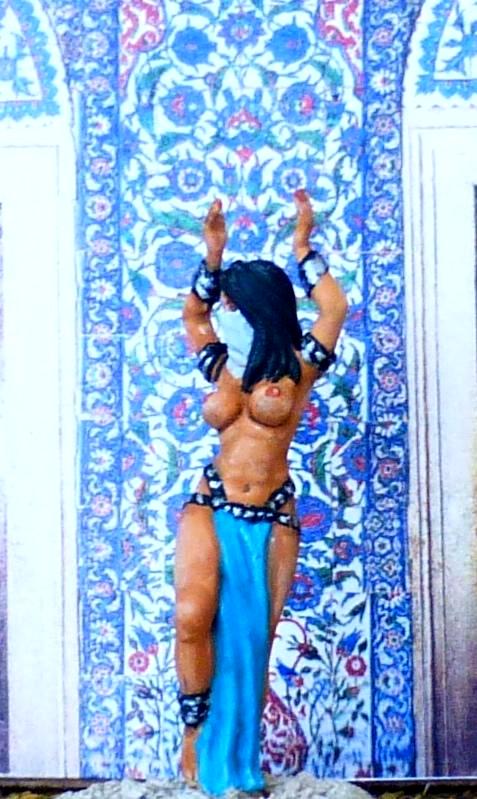 Although I am doing some work on my Carolingians I got distracted by this splendid belly-dancer by Brother Vinni.  She brings my completed figures for February to a massive five!

She may do duty in my nineteenth century In Her Majesty's Name world as Zairah, in her private entertainment capacity to Sir Lawrence Swann.  Really, however, she will be part of my new 1920's Egypt pulp world as Sir Laurence Swann's illegitimate daughter Rania: Dancer, courtesan, assassin, mystic and spy.  More about her back story here. 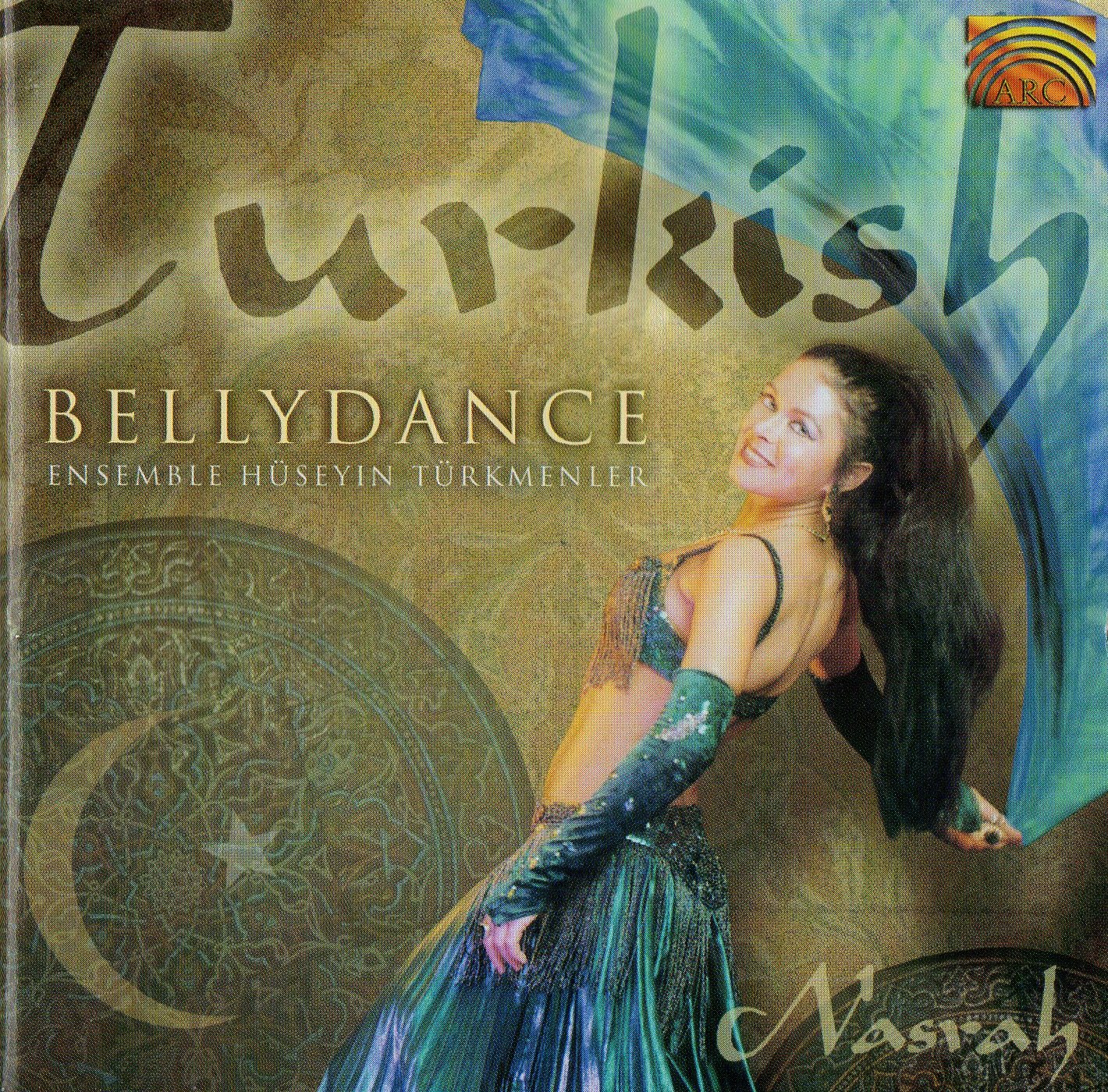 While painting her I listened, naturally, to belly dancing music, of which I have rather a lot in my iTunes collection.  This is partly because I listen to it when in Turkey (as I am likely to be again in April) and partly because my German friend, B, used to do belly dancing classes (probably still does as she is working in Istanbul at present (conveniently)).  My favourite disc is this one by Ensemble Hüseyin Türkmenler, with bellydancer Nasrah Nefer on the cover.

Gyrating in the Grand Hyatt


I have always enjoyed the belly dancing shows in the Awtar lebanese restaurant, in the Grand Hyatt hotel, Dubai, which is where I grabbed this shot of undulating loveliness.  I have also seen good displays in Istanbul, particularly at the Ciragan Palace hotel.  That said,  less exotically, they used to have a regular belly dancer at the Greek restaurant down the road in Esher! 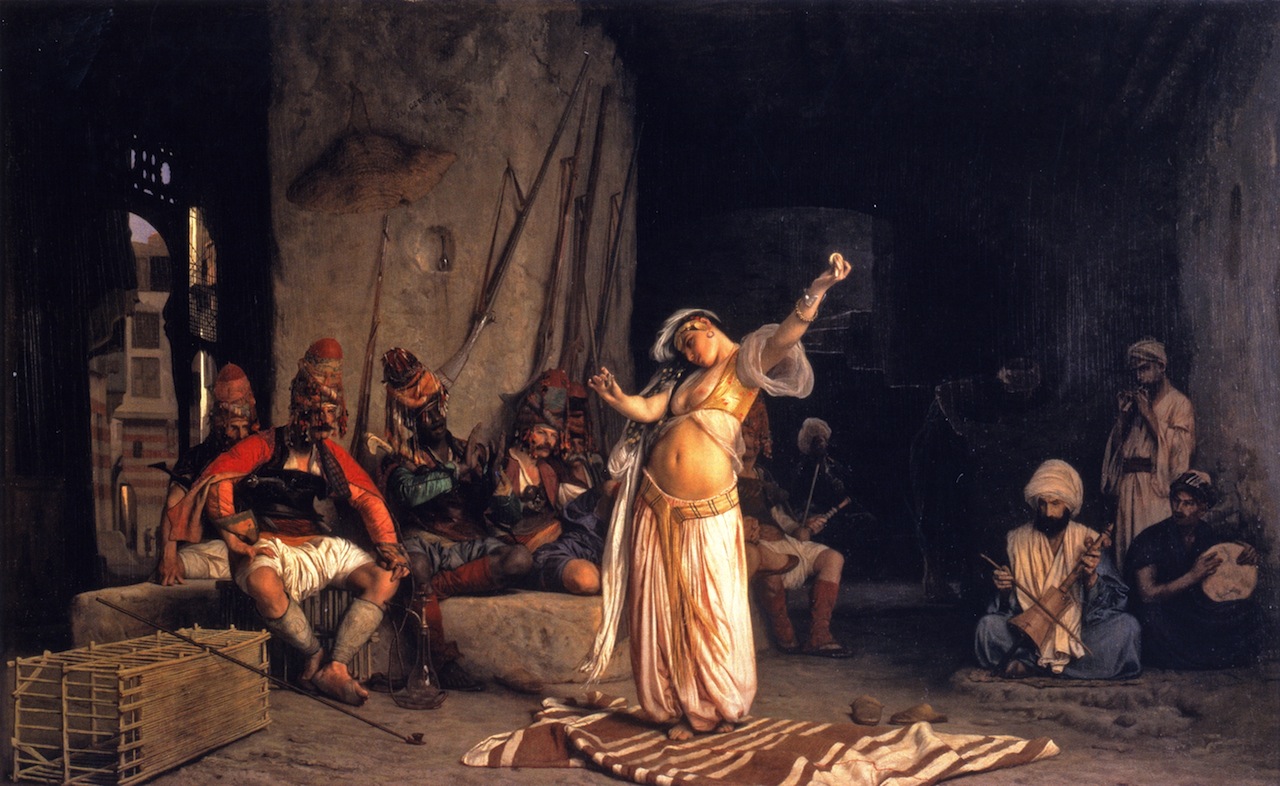 
This sort of dancing had been reported upon in the west by nineteenth century travellers and was illustrated in orientalist paintings by artists like Jean-Léon Gérôme (who painted the famous gladiator painting Pollice Verso), Nils Forsberg and  Vincenzo Marinelli. 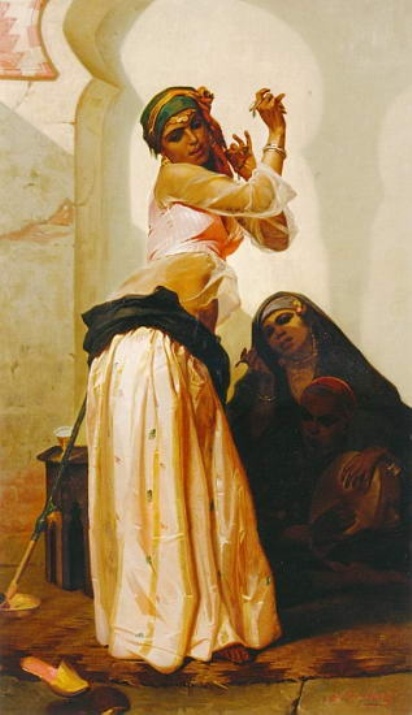 
Most of these were exotic fantasies set in the harem and so they depicted dancers wearing rather less than their actual dancing contemporaries would have been seen in.  Forsberg's painting more accurately depicts the dress and the fact that the dances were performed to all female audiences, until the nineteen twenties. 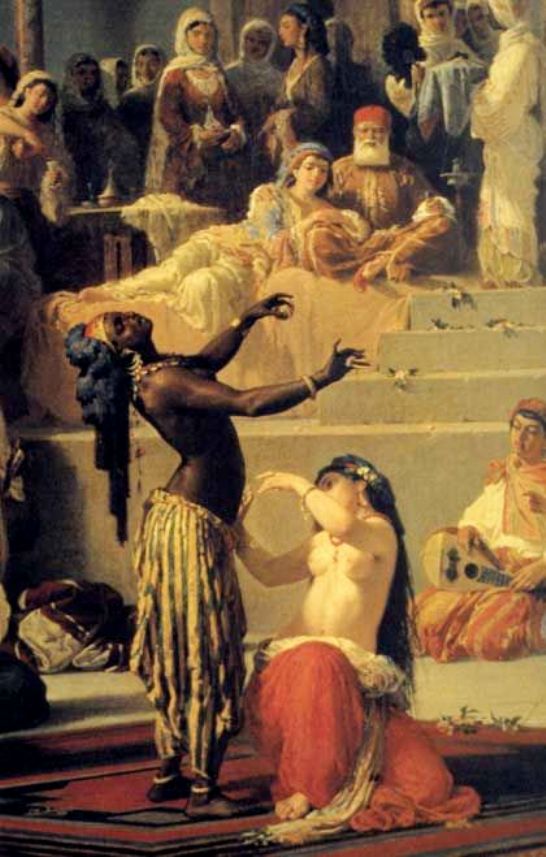 
Vincenzo Marinelli's harem fantasy has his dancers undressed more in the fashion of the Brother Vinni figure.  I am sure, however, that if you had your own harem, as in the Topkapi in Constaninople, you would have had your dancers undress for you so as to appreciate their terpsichorean talents all the more. 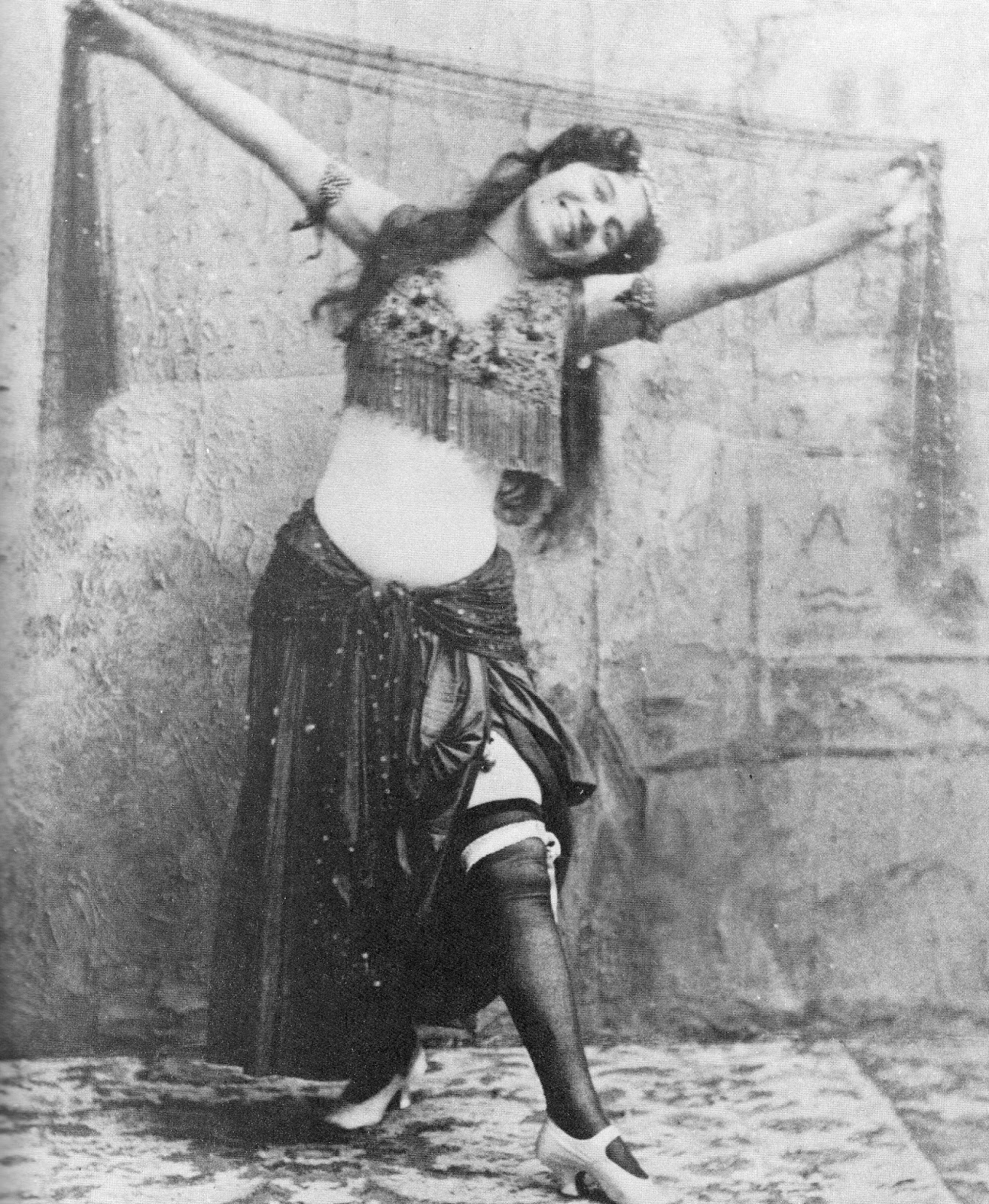 Little Egypt - the sensation of the World's Fair in 1893


Actual belly dancing was first seen outside the Middle East and North Africa at the 1893 World's Fair in Chicago and its shocking gyrations spawned many imitators (and some arrests!).  The performance by 'Little Egypt' (Fahreda Mazar Spyropoulos -a Syrian married to a Chicago-based Greek restaurant owner) at the show The Algerian Dancers of Morocco was rumoured to be so sensational it actually contributed to the financial success of the Fair, due to the crowds she drew.  It is said that Mark Twain, who had a keen interest in technology, made a film of her there and that later he suffered a near-fatal heart attack watching her  perform (he had a keen interest in belly-dancing too).  She was later arrested for performing her dance naked at the stag party of the grandson of PT Barnum. In a strange cultural twist Hollywood started to put belly-dancing in films and Egyptian dancers copied what they saw in Hollywood's version of the dance and incorporated them into their own routines in Egypt. 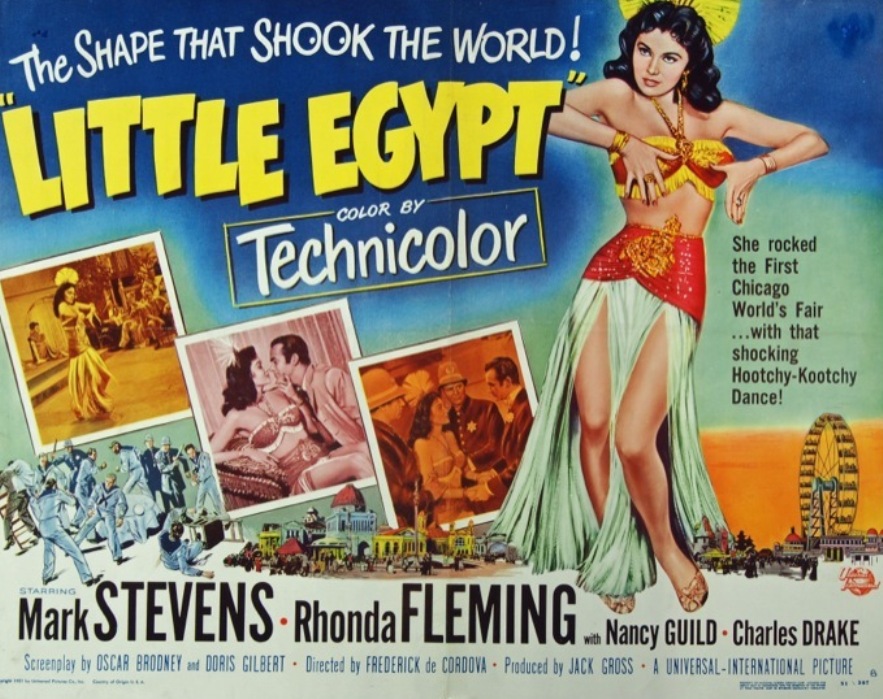 A very,very fictionalised account of the World's Fair shows was presented in the 1951 film, Little Egypt, starring Rhonda Fleming.  Other than the fact that it is about a notorious belly-dancer (or Hootchy-Kootchy dancer as the Americans called them) at the 1893 World's Fair it bears no resemblance to actual events whatsoever.


What we know as belly-dancing today (a translation of the French, danse de ventre - the name given it by Napoleon's troops in Egypt) is a mixture of different folk dances from Turkey, Algeria, Egypt and Syria, melded with western forms. Its development went the opposite route of that other scandalous dance of the late nineteenth and early twentieth century, the Can-can. The Can-can began as a solo dance and evolved into a group dance while belly-dancing began as a group dance and gradually became a solo dance in the nineteen twenties. In the Middle East itself, its heyday began in the nineteen twenties, with the lifting of religious restrictions in Turkey in 1923 and the work of pioneers like Badia Massabni, a Lebanese, who introduced it to the clubs of Cairo in the late nineteen twenties.  It was Massabni who introduced formal choreography and incorporated western ballet and Latin American dance elements.  She also introduced, appropriately for this figure, the concept of the dancer lifting her arms above her head, something not seen in the original folk dances. It's flowering in Cairo stopped in the 1950s when restrictions were introduced to prevent too-revealing costumes and ban floor work (which remained popular in Turkey), which was considered overly lascivious. 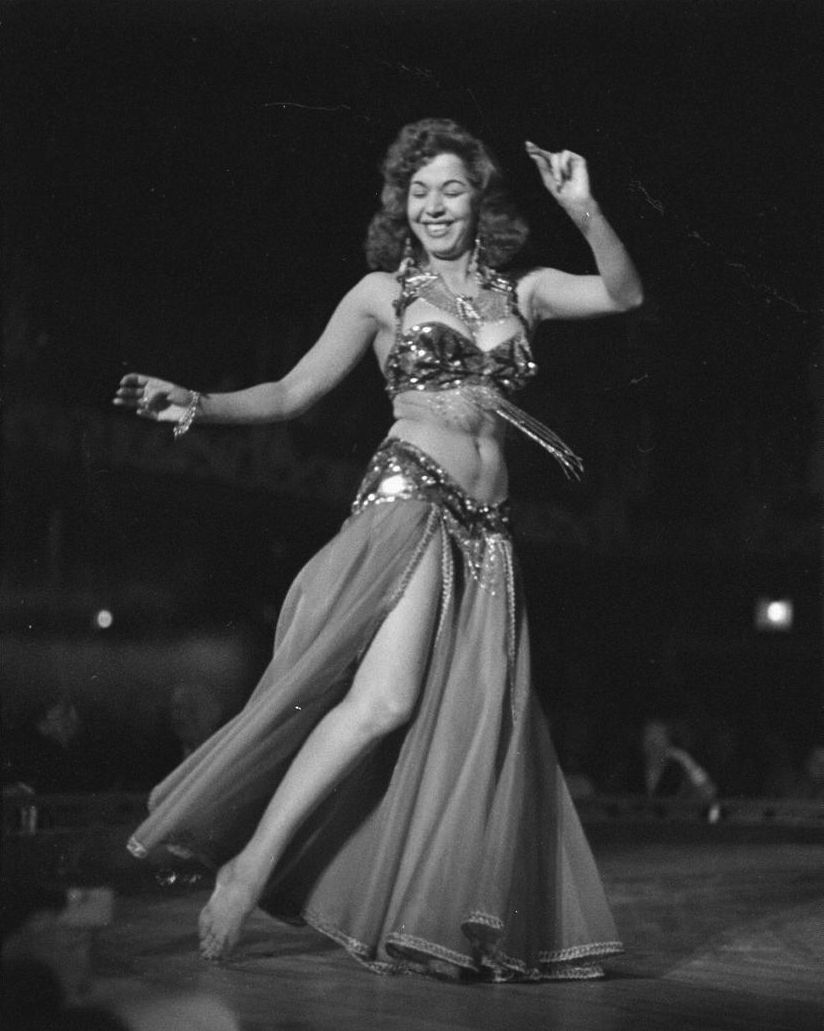 
From just before this period we have an actual Egyptian belly-dancer, Samia Gamal (born Zeinab Ali Khalil Ibrahim Mahfouz) who was a protege of Massabni and was considered the Egyptian Ginger Rogers.  She visited the US in 1950 and became well known as a result, even marrying an American (briefly). 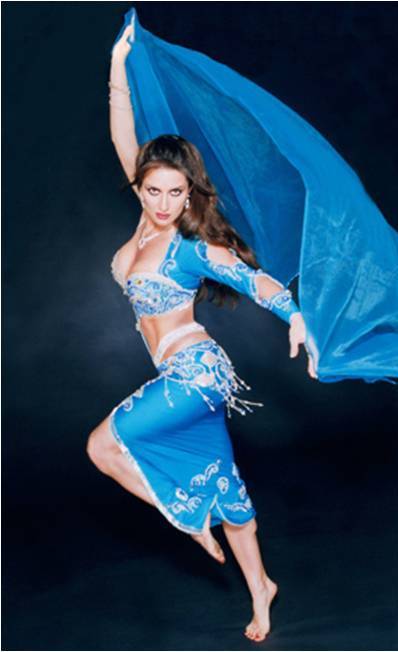 
Dancers like this were never acceptable in Egyptian or Turkish society, even at the time.  Many of the Turkish dancers were actually Roma people. The dancers in Egypt were likely to be Lebanese or Syrian.  Today, the dancers you see in places like Dubai may come from Argentina or India.  Noted modern dancer, Rania Bossonis, is Greek.  I have borrowed her first name for my character but I also knew a fiery Egyptian lady called Rania, who I met at a reception in the British Ambassador's residence in Cairo a few years ago.  We later met up in more relaxed circumstances in Geneva where she did not have to coneern herself so much with Egyptian norms of behaviour for a lady (which she very much was, however). 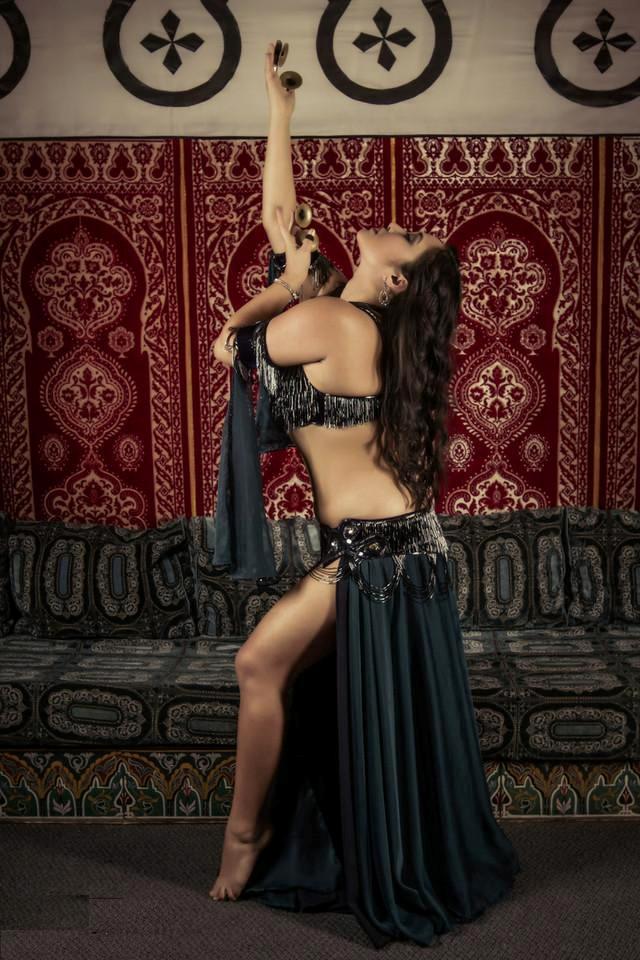 
The Turkish and Egyptian styles of belly dance have some stylistic differences (the use of the finger cymbals, zils (also used in Ottoman military bands), is a Turkish practice, for example) but these days it tends to be a mish-mash of various styles and influences.   Rania Al-Ghais, having been schooled in the Egyptian style. would not, therefore, sport zils.

I think I have another two Brother Vinni dancers to work on so may dig another out soon!
Posted by legatus hedlius at 2:16 pm