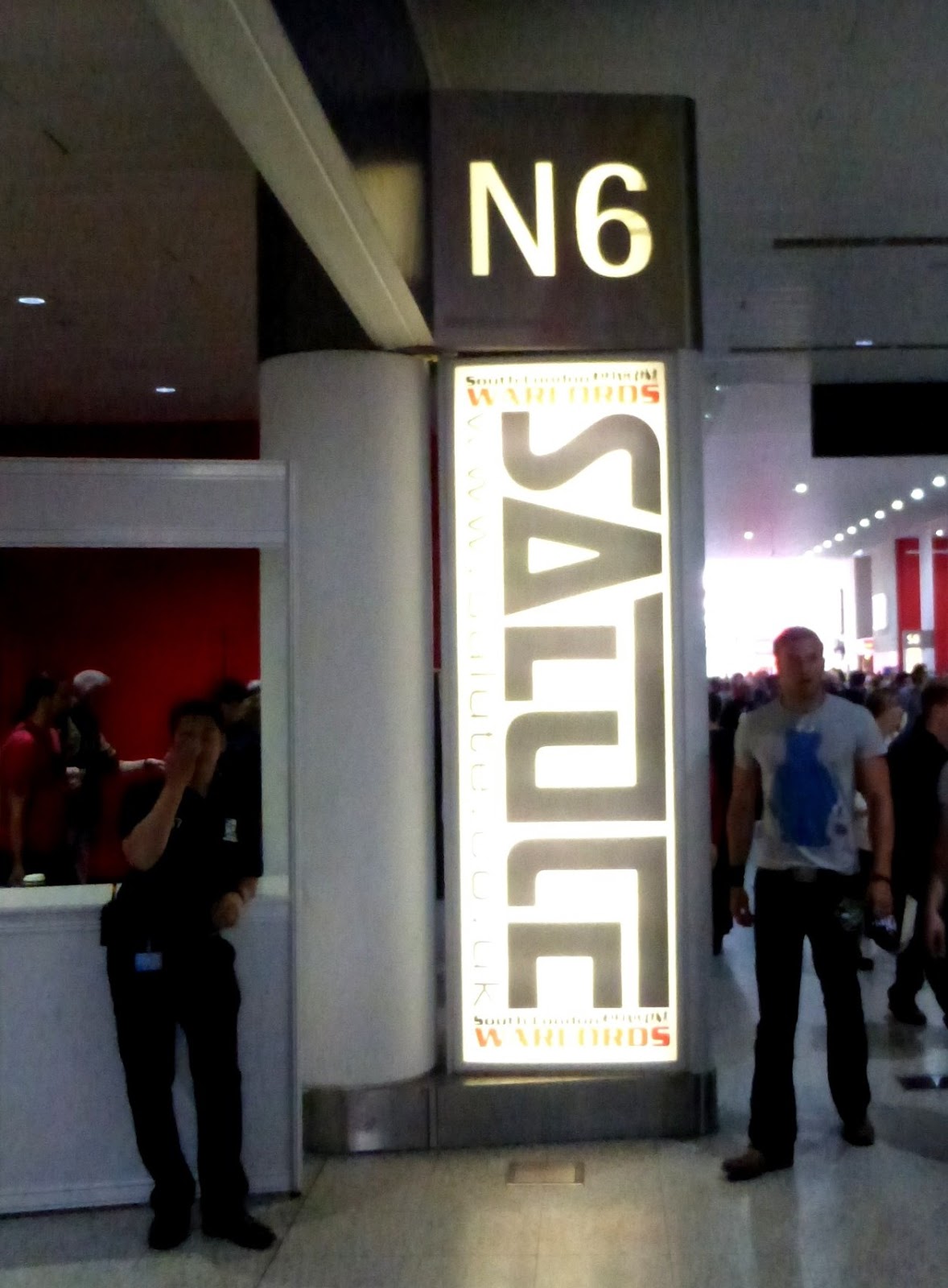 I've been going to Salute as often as I can manage since 1999; the last year the event was held in Kensington Town Hall,  I haven't been every year as I have missed several because of international travel but I suppose I have been to at least a dozen now.  It is now a huge event in the ExCeL centre in London's docklands and is, in fact, so large now that it is quite gruelling walking around it.

Talking of gruelling I usually aim to arrive at about 11.00am when there is no queue.  Today I wanted to get there earlier so arrived forty minutes before my usual time.  I might as well have not bothered because I just stood in the queue all that time.  They used this empty part of the building for the queue.  This is exactly the same size as the Salute area further down the building, which gives you an idea of how big it is.  The teeny, tiny people in the far distance are the ones who were organised and ordered their tickets in advance.  I didn't, because I thought I might be in Medellin, so had to queue with all the other disorganised people along the right hand wall. 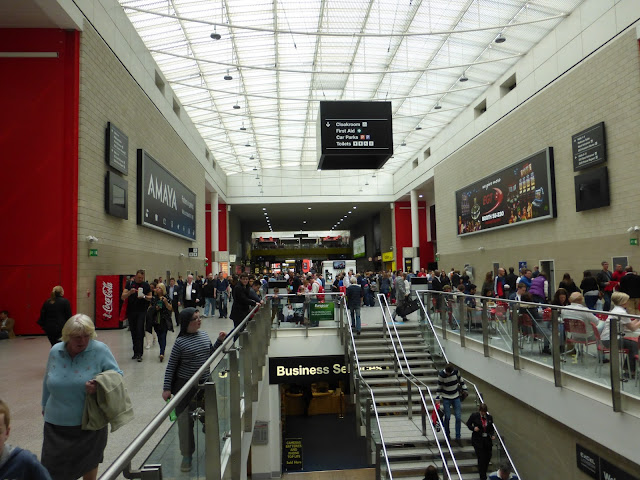 ExCeL is a vast building (about 100 acres) and they also had a property exhibition on and the registration for tomorrow's London Marathon as well.  People always note the amusing contrast between skinny marathon runners and not so skinny wargamers.  Of course some evolve from one into the other.  I ran the London Marathon twice, in 1987 and 1990.  I was a 400 meter runner at school so the marathon is almost exactly 26 miles further than I can run in comfort.  In 1990 I was part of a Lloyd's of London team organised by our then chairman, who was one of Roger Bannister's pacemakers at Oxford.  He hired Zola Budd's coach for the team and he got me down to 3 hours 40 minutes.  Never again.  I reckon it took me two years to recover.  Some people are born distance runners and some are born to paint soldiers.  No doubt there are some who can do both!  Anyway, I thought ExCeL was the busiest I'd seen it today. 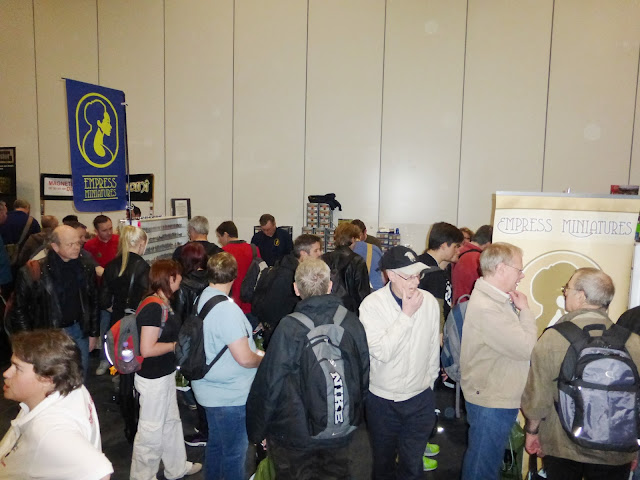 I also thought Salute was the busiest I'd seen it.  Nearly every stand had a pack of people in front of it.  This was the Empress stand (I bought some more of the superb new Paul Hicks WW1 British) and it was two or three deep all the time I was there. 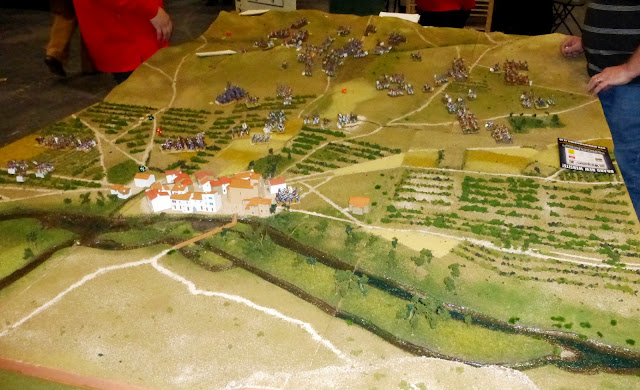 I will leave others to display photographs of the games but I was very taken by this Albuera Peninsula game put on by Capitan Games of Spain.  A really fantastic piece of terrain that actually looked like a real landscape. 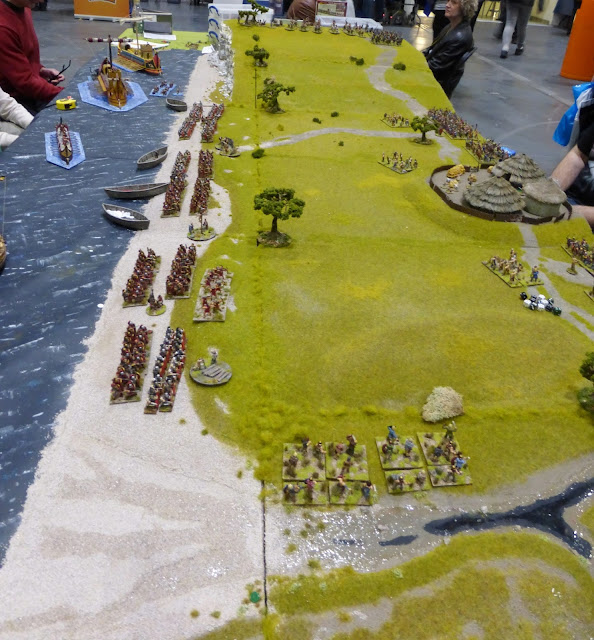 Of course, my favourite game had to be Big Red Bat's invasion of Britain one; put on in conjunction with Wargaming, Soldiers and Strategy magazine.  Not only did it have one of the nicest beach layouts I have seen but, lurking in the corner was my dreaded Roman Galley which Mr Miller (the Bat himself) has been encouraging me to finish since last summer and without whom it would still be up in my resin pile in the loft.  I must also thank Mr Mark Backhouse who provided the second Grand Manner galley for the game and lent me some of his figures to populate my decks.  More importantly, he helped me solve a number of engineering problems during construction over the last couple of weeks.

The Legatus' galley (foreground) provides cover for the disembarking elephant


He had built a proper base for his galley but his real stroke of genius was including a barge with an elephant as well.  I wish I'd put some slave girls on mine now!  He'd also done some excellent bases of troops wading ashore.  This is the first time anything I had painted has been in a game at a show.  I am now keen to get on with my Grand Manner Argo which should be a piece of baklava in comparison.  Not least because it has a moulded furled sail whereas I had to jury-rig a sail at ten o'clock last night.  Fortunately, my wife came to the rescue and flaked it properly for me so it looked much better than my original effort.  I just need to rig mine properly to finish it.  I couldn't do this because I had to transport it in pieces on public transport. 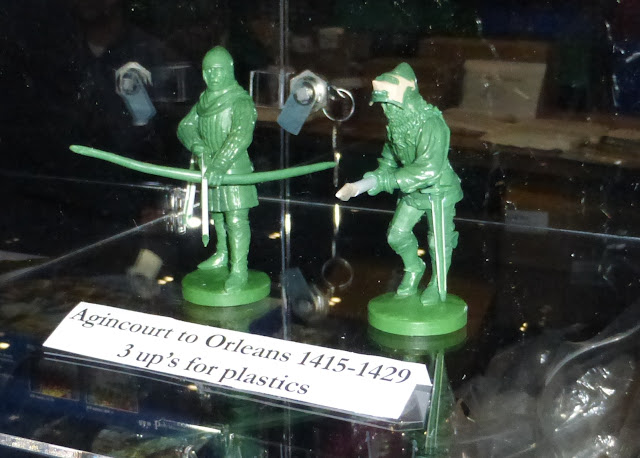 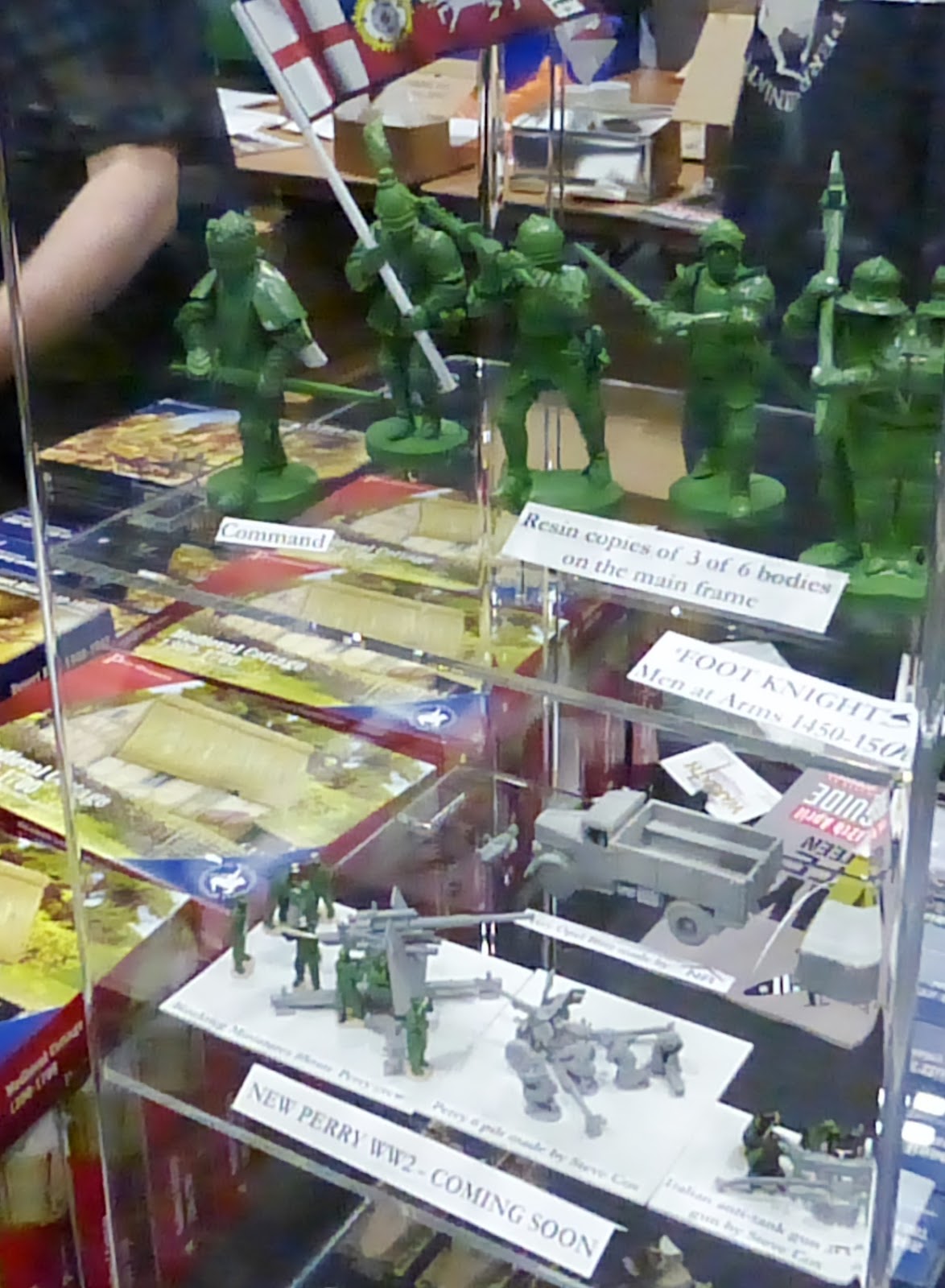 One thing that Salute is good for is spotting future items of interest.  The Perry's had some three ups of their plastic men-at-arms, which I will get for my Wars of the Roses forces.  These I knew about but I hadn't heard about the plastic Agincourt to Orleans figures.  This is a range I have been trying to resist since it first came out.  Plastic figures might drive me over the edge!  There was also  an 88 and crew for the Western Desert (trying to resist those too!) 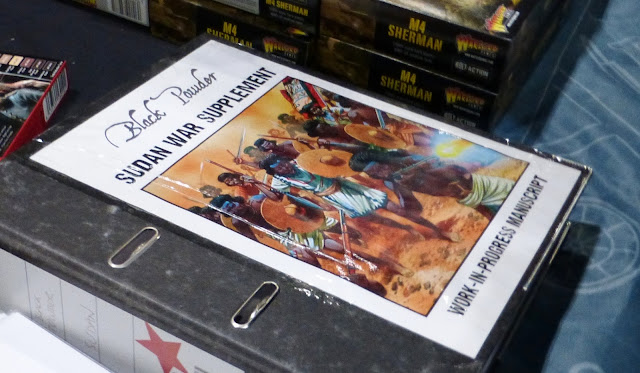 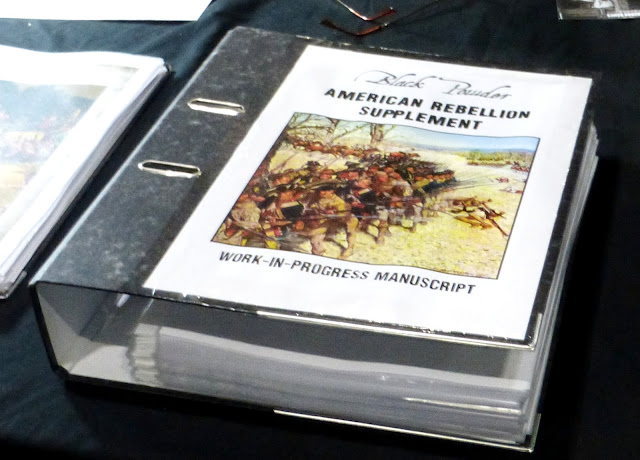 On the Warlord stand they had draft copies of new Black Powder supplements for the American Revolution and the Sudan.  Their Zulu wars supplement was excellent so the Sudan one will be a must buy. 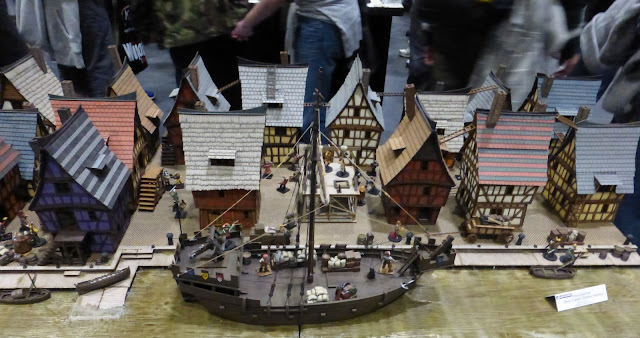 4Ground had a huge stand with lots of tables showing their excellent laser-cut kits.  It reeked of smoked fish, of course.  Coming soon from them are these medieval fantasy buildings.  It strikes me that these would be perfect for Transylvanian-set games of Empire of the Dead.  The roof shapes are very Romanian. 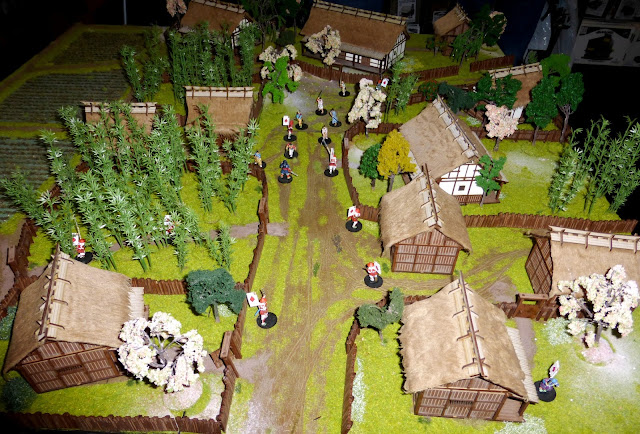 I picked up one of their Japanese buildings to go with my Ronin figures which I still intend to get on with this year.    It will be interesting to see how I get on with the dreaded teddy bear fur. 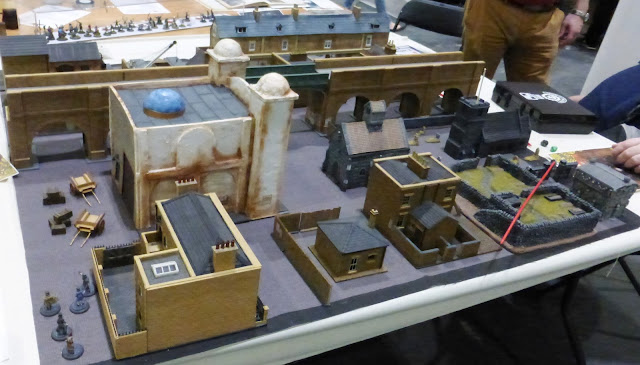 Something I hadn't seen before, and which would be perfect for In Her Majesty's Name, was a series of models by Sarissa which make up a railway viaduct. I bought one of their Japanese bridges, which is very much at the other end of their scale. 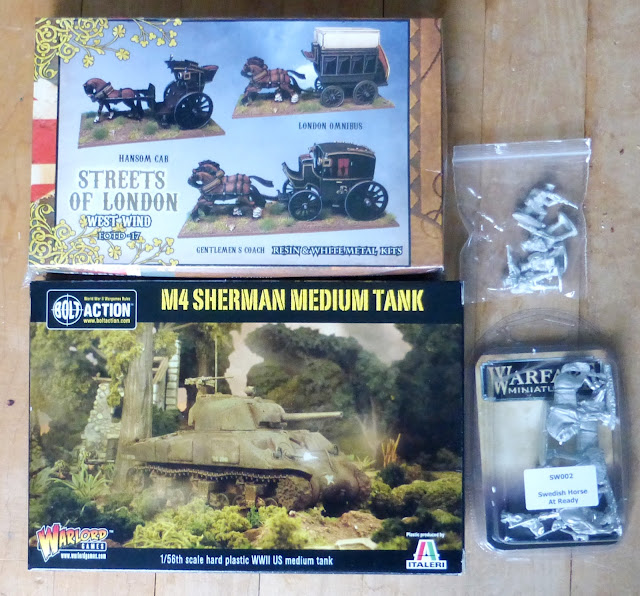 As regards purchases it must be a record for me in that I only bought seven figures: Four Paul Hicks Mutton Chop WW1 British and three Warfare Miniatures Great Northern War Swedish Cavalry.  The other figures I wanted (Lucid Eye Neanderthals and Artizan North West Frontier) had sold out.  However, I did buy a box of Empire of the Dead carriages and coaches and the new Warlord/Italaeri Sherman; although I'm not quite sure what the latter will be used for! 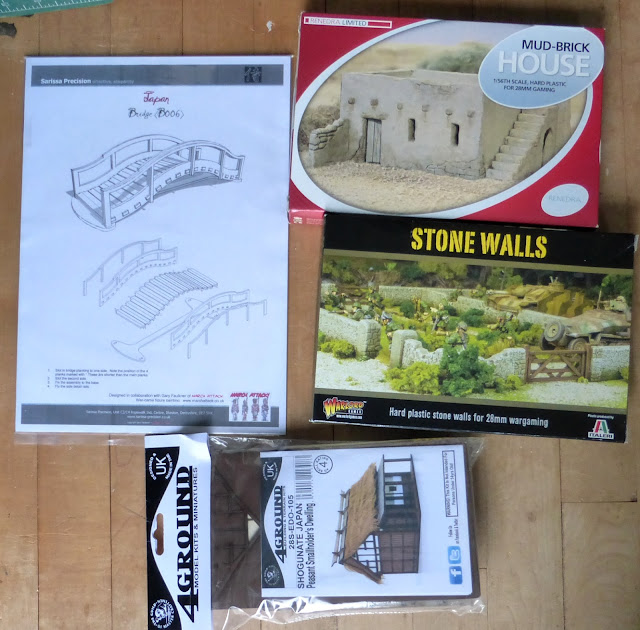 Apart from the two Japanese scenic items I have already mentioned, I also got the new Renedra mud brick house (I really enjoyed making their barn last year) and the new Warlord stone walls which will be very useful.  I must get more scenery! 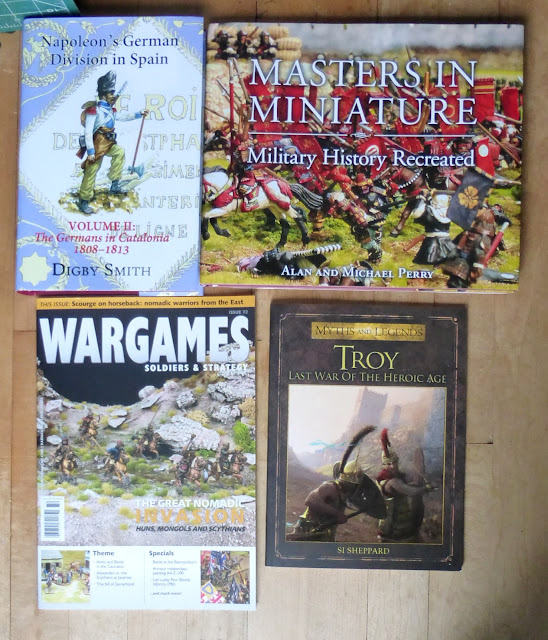 Finally, I picked up a few books including the new Perry picture book, a book on the Germans in the Peninsula (which will be very useful for my Confederation of the Rhine project), the Osprey on the Trojan War and the new WSS.

So, I have got lots of exciting things to make without having added too much to the lead pile.  Sort of. 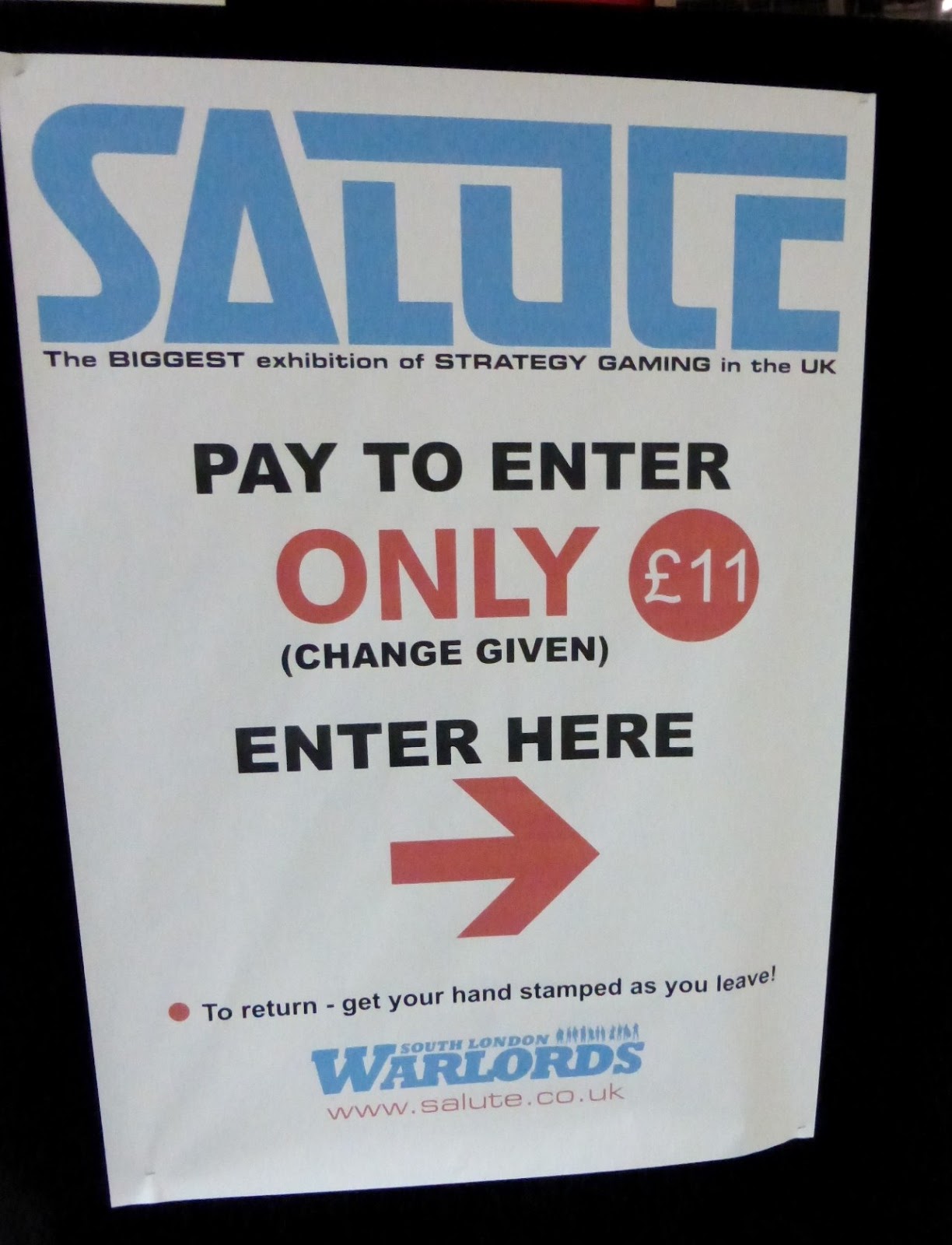 I thought I was a wargamer but, apparently, I am a strategy gamer!


Sadly, I failed to meet up with Eric the Shed (who has some great photos here), Nick Futter of Boot Hill Miniatures and Craig Cartmell of IHMN but there were an awful lot of people there.  I also missed the bloggers meet up, if it happened.  I enjoyed Salute this year more than the last few I have attended.  Tomorrow, however, it's back to the paint table and the Mexicans!

Posted by legatus hedlius at 11:00 pm 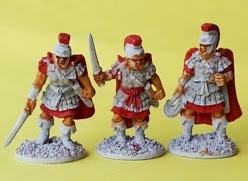 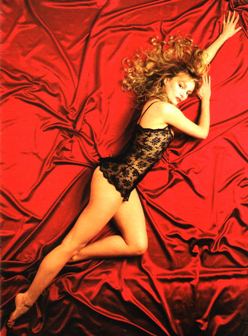 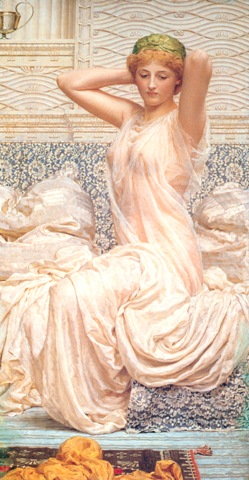 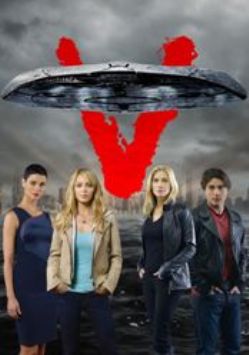 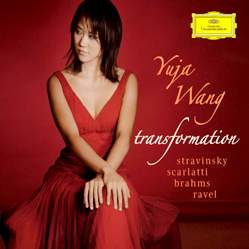 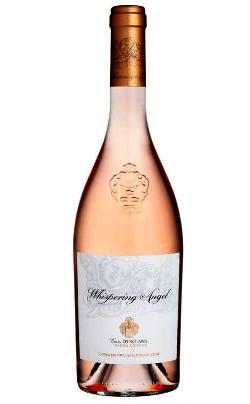