First two figures for In Her Majesty's Name 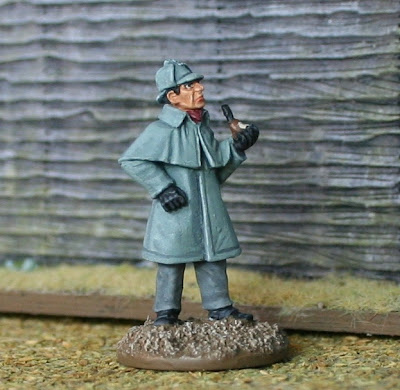 I sat down and painted these two yesterday.  The "Consulting Detective" from the Scotland Yard company and a cultist follower of Akhenaton from the Servants of Ra company.  Yesterday evening I also cleaned up and based the rest of the figures from these companies plus the Lord Curr's Company as well. Still two more companies to go though! 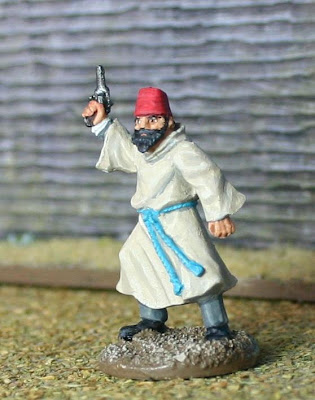 A number of issues have presented themselves, however.  The first relates to the quality of the figures.  Not the quality of the sculpting, I should add, which is characterful and excellent. There are two issues here.  Firstly, several of the figures have been slightly misaligned in the mould which necessitated more than a bit of filing and some actual carving with a knife to get the two surfaces aligned. Nothing fatal, but time consuming. Several figures were also pitted and all had quite prominent mould lines. The second issue is that the metal they are made from is quite soft (usefully given the above) but, as a result I am concerned for the durability of some of them. 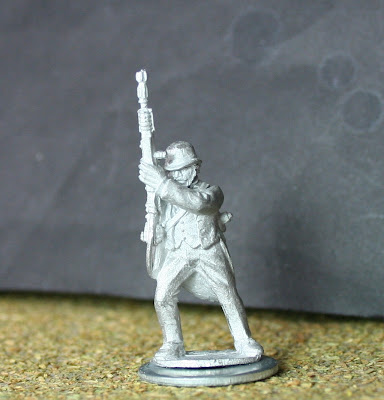 Lord Curr himself brandishes a long and exotic gun but the top portion of this is very susceptible to bending to the extent that I expect it to fall off shortly. Likewise he dancer, Sairah, is connected to the base solely by one slender ankle.  She is also looking fragile.  The upshot here is that compared to the Perry and Aventine figures I am working on at present, they have used quite a low quality metal. 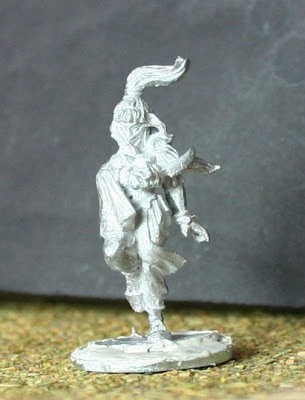 The final two issues relate to aesthetics.  A large part of my interest in these figures was because of Kevin Dallimore's splendid paint jobs on them.  Unlike historical military figures, however, you can paint them any way you like and, yet, Mr Dallimore's artistic choices are so spot on that you are tempted just to follow his colour scheme.  If you did, however, you would just end up with an inferior copy of his figures.  This became an issue with my very first cultist figure.  Everyone knows that Pulp cultists wear red but I didn't want to go down that route for the reason given above.  Red would be appropriate for these figures too because of  ancient representations of the Eye of Ra (depicted on the mummified priest figure).  Instead I have painted mine a sand colour (Humbrol 121) as they look appropriately Egyptian.  This is the colour I use for my Sudan bases as it is very close, coincidentally, to the colour of the sand in Egypt and the Sudan, as you can see from my profile picture further down on the left.  The turquoise-blue shade is going to be used throughout this company to reflect the lapis lazuli used in a lot of ancient Egyptian jewellery.  I have decided not to attempt to paint the Eye of Ra symbol on their tunics as this would be beyond me.  I am amused to see that Mr Dallimore has used the Stargate version of this ancient symbol rather than anything more archaeological. 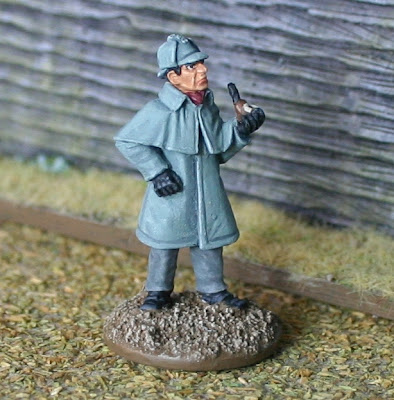 This wasn't such an issue with the Sherlock Holmes figure as a grey coat and deerstalker are common.  Jeremy Brett wore something very similar in a number of his Sherlock Holmes episodes.  I thought that the figure looked enough like the late Mr Brett to give him black gloves which he wore so often in the superb ITV series.  The other civilians, also, will be easier to de-Dallimore and I am currently researching late nineteenth century gentlemen's clothing which is rather more colourful than formal wear today.

The second aesthetic issue is more fundamental.  How do you depict the figures' bases when they may be deployed in both urban and rural settings?  Earth and grass would look odd inside a building (I am having grandiose thoughts about attempting to construct a museum interior).  Equally, a paved surface would be strange in the country.  So I have left the bases as a compromise bare earth.  I'm still not sure on this one.  My daughter says that obviously I need differently based figures for the different environments!  Given it took  me around seven hours to paint these first two I don't think that that is likely.

So, I have some more time today so try to get some more prepared.  All in all they are very enjoyable to paint but take a lot of time as I am using four or five shades rather than my usual three.  Watson is under way so maybe one of the young ladies next!

Posted by legatus hedlius at 1:10 pm