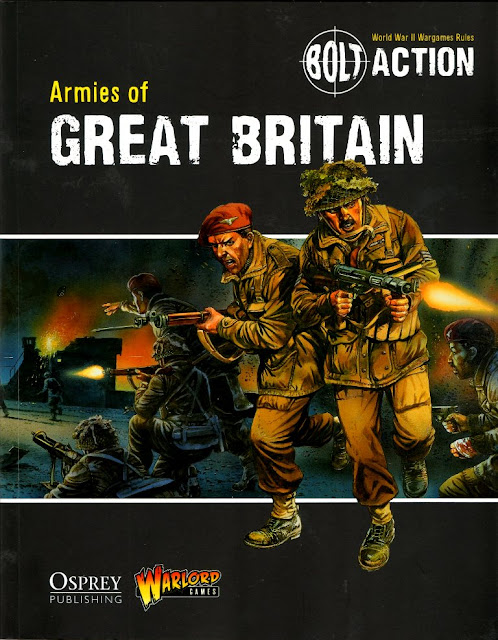 I headed down to Orc's Nest this morning, after my morning meeting near Euston, only to find it didn't open until 11.00am.  Given it was 10.30 and absolutely freezing again I went around the corner to Foyles bookshop, which was a mistake.  Three rapid purchases followed in their very good military history section.

The first, at least, I had intended to buy, which was the Bolt Action British supplement.  Some useful lists although an almost total lack of mention of either Norway or Crete in their focus on the different theatres the British Army saw action in.  Warlord have re-issued the old Mike Owen sculpted BEF early war British with interchangeable heads so I might have to get some more of these.  Much of the book focuses on stats for various vehicles and some theatre specific army lists.  I would really like a 1/56 Matilda!   I need the German one, which they also had in stock, but feel a bit odd buying WW2 German military books.  People might think I was one of those ghastly Nazi apologists they had at Salute a few years back.   Best to order anonymously off the web for delivery in a plain paper cover. 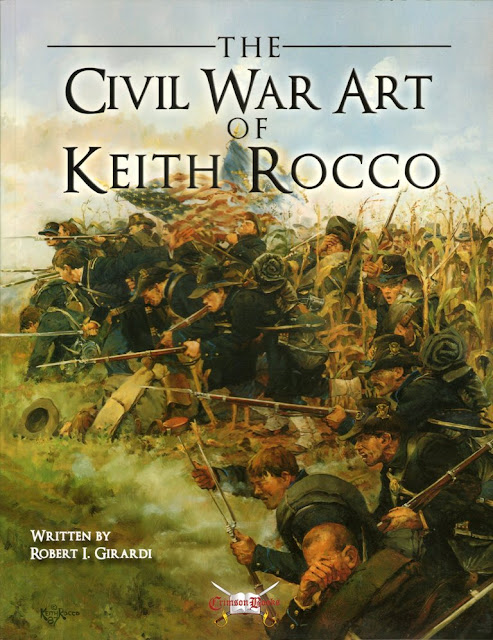 I also picked up a book of American Civil War paintings by Keith Rocco.  I hadn't heard of him before but there are some very nice illustrations in this and they will get me to finish my ACW unit I hope! 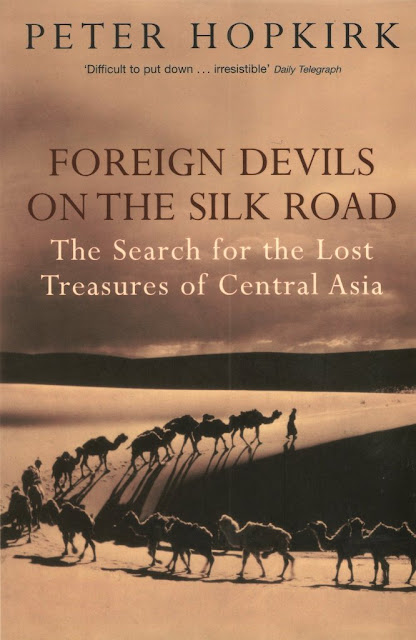 Finally, I bought another Peter Hopkirk Back of Beyond book Foreign Devils on the Silk Road which is so fascinatingly readable that I am already well into it.  Some definite scenarios spring to mind around competing treasure hunters from different countries.  I would then have an excuse to buy some Copplestone Castings pack camels! 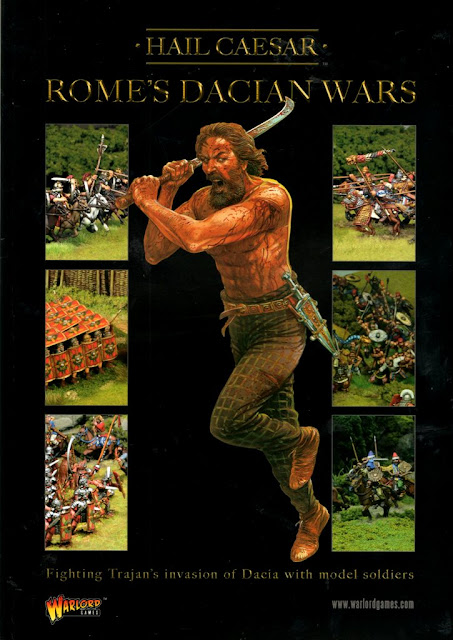 So, eventually, back to Orc's Nest, and, sadly, no sign of the new Black Powder Hundred Days supplement yet but I did pick up the Rome's Dacian Wars supplement for Hail Caesar.  Since my trip to Romania last year I have had a hankering to do some Dacians and this may well tip me over the edge.  Apart from the usual army lists there are a few tweaks to the rules (allowing Roman archers to shoot over the heads of an infantry unit in front of them, for example) plus new (basic) rules for ship movement and rather more in depth rules for sieges.  There are new skirmish rules included but these are really very small scale as they envisage just six figures a side.  Excellent news for me!  Essentially for one unit in the main rules read one figure.  I might have to try these out.  There are five short skirmish scenarios (lost patrol, the scouts, working party, the lost eagle, the prisoners) all designed for a 2' x 2' board.  Most of the book is made up of nine scenarios for big battles (siege, river crossing, hold the pass etc).  They are big too, with the first one requiring over twenty units of Romans and the same for the Dacians/Samaratians.  They would all equally work as well for any barbarian opponent and I will be using some for my Marcomannic Wars forces (eventually).  Altogether a worthwhile purchase and full of pretty pictures, as ever. 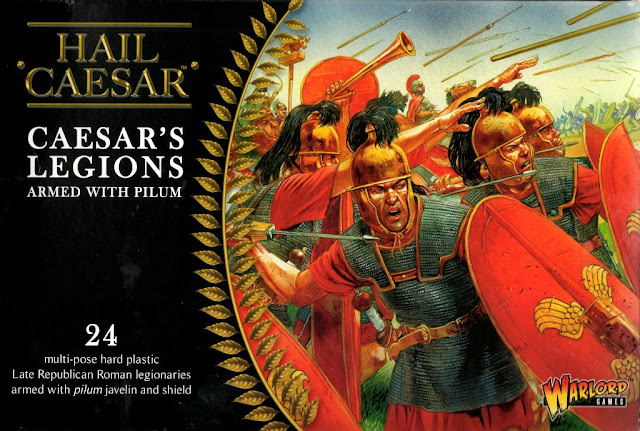 Most satisfying buy of the day was, rather to my surprise, the new Warlord Games Caesarian Romans.  I saw the three-ups of these at last year's Salute.  I have got quite a lot of the Foundry Copplestone sculpted ones which was making me hesitate about buying these but, blow me down, they work perfectly together.  You could put them in the same unit with no problem at all. 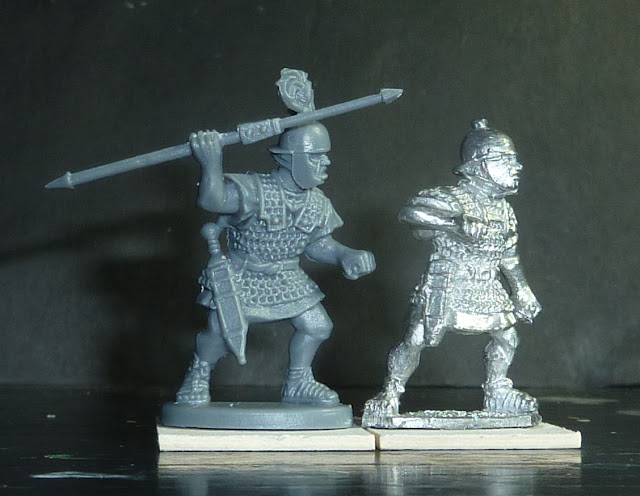 I wasn't convinced by them in photographs as I thought that the chainmail rings were too large and crude but they look fine in reality and are the same size as those on the Foundry figures.  In fact, I think they are actually nicer than the Copplestone figures but it means I can use all the Foundry character and command figures with the Warlord plastics.  The Warlord figure looks bigger but it has a much thicker base.  If I mix in metal Foundry command (although Warlord have released a nice metal command set today) I might put something under the base of the Foundry figures. Unlike some Warlord Romans they don't come with shield transfers but you can get them separately.  The only bad thing is that now I am going to be building Roman units from three separate periods at the same time.  I'm turning into Big Red Bat!  They should be quick to paint too!  The most exciting plastics since Pamela Anderson in the opening of Barb Wire!  Simple but effective (just like Pammy!). 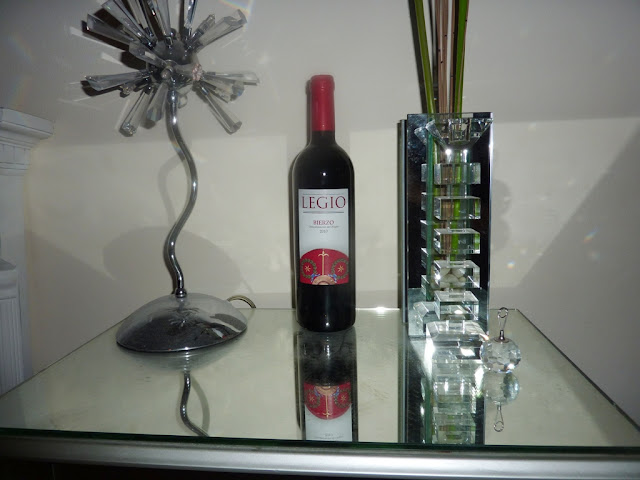 Anyway I know exactly what to drink while putting them together (separate heads and right arms) as last year I bought a few bottles of a delicious Spanish wine called Legio from the Bierzo region which actually has a Roman shield (albeit a standard bearer's, by the look of it) on the label.  I Have a bottle already to go! 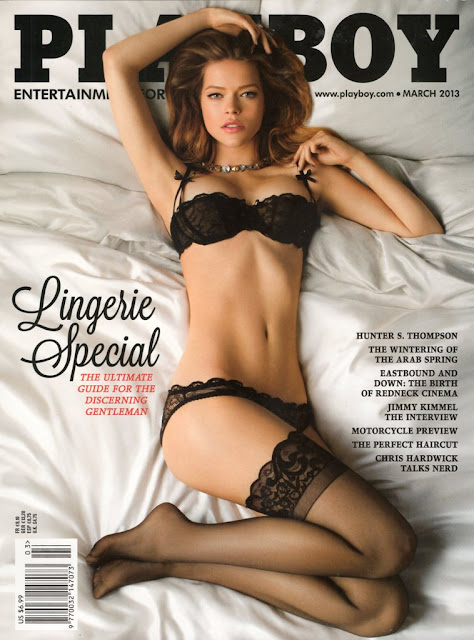 I also managed to pick up last month's Playboy which, again, demonstrates a marked improvement in cover design over the frantically busy and uninspiring covers of the last few years.  There have been just over 700 issues and I have about 580 of them.  They take up a lot more room than model soldiers though, bearing in mind that, as an example, for the seventies (for which I have all 120 copies) they take up 20 box files ( I only have 56 box files full of soldiers).  I only need six more from the sixties to complete that decade too. I need a bigger study!  I must stop putting half dressed women in my posts or someone will label it an objectionable blog.

Speaking of which, following all this retail activity (I did work pretty much all day Easter Monday) I then had a long lunch at the National Gallery with the lovely D who, disappointingly was not wearing one of her usual low cut tops.  Curse this weather!  D is, rather dubiously, the friend of one of an ex colleague's daughter so is less than half my age.  Never mind, she keeps me young and we had a lively debate about tablets (not the sort I need to take, as she cruelly pointed out), social media and the Cloud.  "We should be in the Natural History Museum, you'd be much more at home there!" she said in exasperation at one point.  How rude!

Well I have just put together a short Roman playlist on iTunes (Respighi's I pini della Via Appia, the Triumphal March from Quo Vadis and quite a lot of bits of Ben Hur) so I need to start clipping Romans off the sprue (although I gather that the sprue is only the thickest parts off the whole thing).

Posted by legatus hedlius at 8:44 pm

Labels: Back of Beyond, Books, Dacians, magazines, Romans, Rules