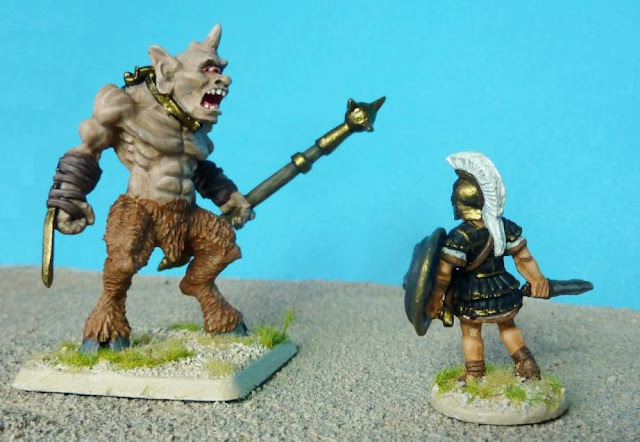 Reaper Cyclops squares up to a Foundry Argonaut

Well, this is an unusual sort of figure for me.  It is a Reaper Miniatures Cyclops which I picked up recently at Orc's nest.  It is nothing like a Greek mythological Cyclops as it is based on the one in Ray Harryhausen's The Seventh Voyage of Sinbad (if only someone made a really good range of Sinbad figures!).

I will write more on the Cyclops in my new Argonautika blog shortly. 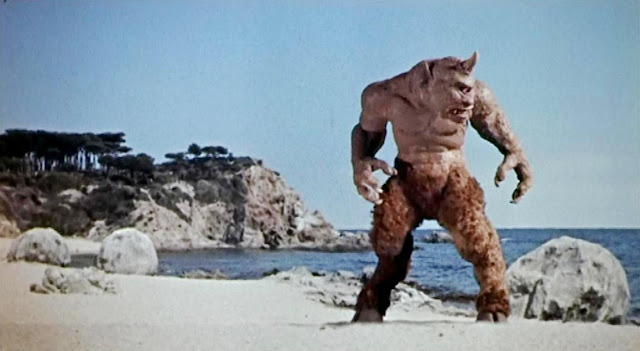 The Cyclops in The Seventh Voyage of Sinbad (1958)

The figure was very easy to paint once I had found some colour references for it.  Unlike many of the Harryhausen figures which still exist, this model, being one of the older ones, has suffered in the fifty or so years since it was built, so no good, modern pictures exist of it.  I found some stills and watched the film again on DVD.  Incidentally the beach in the background, Sa Conca (near Girona in Catalonia), was also used in another two Harryhausen films The Three Worlds of Gulliver (1960) and Mysterious Island (1961).  Sadly, the then deserted bay has now been entirely surrounded by villas which is one of the reasons that all recent Greek mythological films tend to be filmed in unspoiled Turkey. 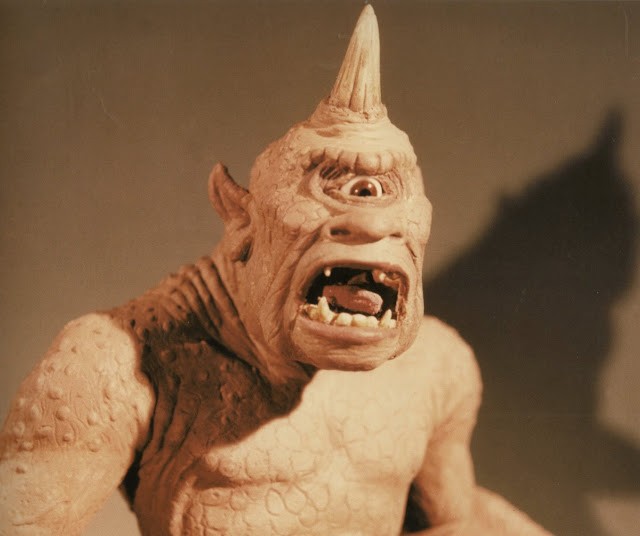 With its goat legs, the Harryhausen Cyclops is very different from the giant human of The Odyssey but this was a deliberate move on Harryhausen's part as he worried that a more human figure would be taken by viewers as a man in a rubber suit.  The single horn would become a typical Harryhausen feature.

It looks, from the look of the Tribes of Legend book, like Foundry have a more conventional Cyclops on the way but I just wanted some Harryhausen in my games!

As a more primitive creature I have given him bronze weapons (the one in the film was unarmed) as compared with the technologically advanced, iron-armed Argonauts
Posted by legatus hedlius at 3:06 pm

Labels: Jason and the Argonauts