Lord of the Rings Attack Troll 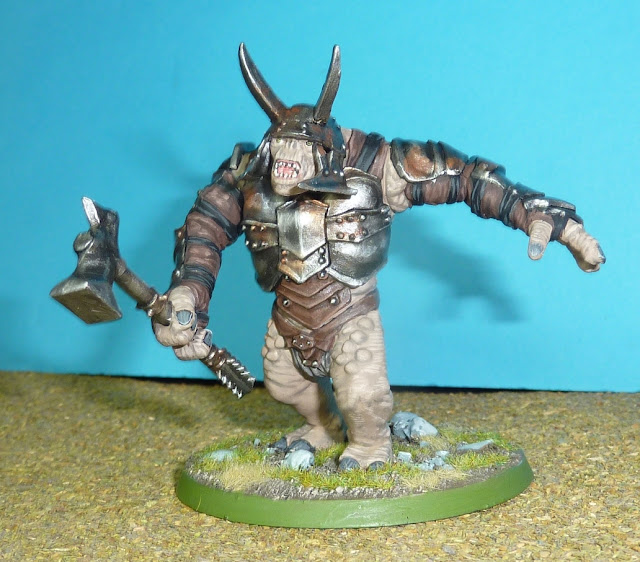 I don't paint a lot of fantasy figures but I do like the Games Workshop Lord of the Rings ones.  Given that they actually do see service in the occasional game I usually have a few at various stages of completion.

I bought this down on the Isle of Wight last summer and based it and undercoated it immediately but it then sat on my workbench for over a year.   It's the first big plastic LotR figure I have done (my other troll was a metal one) and apart from the typical lack of undercutting it was fine to paint.  I have another big figure undercoated, a fell beast, which I may have a go at next as it is gathering dust on my shelf.

Made good progress on the Copplestone 18mm fantasy figures today so may try and get some more done this week.
Posted by legatus hedlius at 5:16 pm 1 comment: 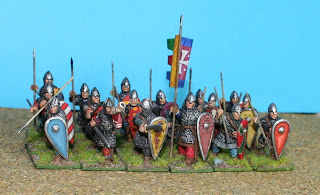 I always shock myself when I actually finish a wargames unit, as I very rarely paint a unit at a time, preferring to have a lot of groups of half a dozen very different figures on the go at the same time.  However, here is my first unit of Norman milites on foot.  These Crusader figures are pretty quick to paint because of all the chainmail although I have to say that I didn't give them a lot of attention; just bunged on paint as fast as I could to get them done.  More about my Normans and. indeed my other thoughts on my many ongoing Dark Ages armies will be found on my Dark Ages blog in a few days or so (which probably means a week!).
Had quite a good weekend painting, despite the usual taxi service for the children, with some more done on my Copplestone 15mm figures and a lot of progress on the Lord of the Rings troll, which might even get finished by the end of the week. 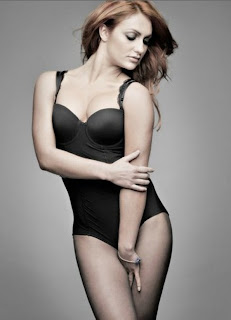 Aliona!
I assembled my first sprue of Perry plastic Mahdists whilst watching Strictly Come Dancing last night (that Aliona Vilani was looking particularly sumptuous we thought) with the family (well not with Guy, he was watching Those Magnificent Men in their Flying Machines on my computer instead). My first impression is that she looks much better without that ridiculous scarlet hair.  No, no!  What I meant to say was that my first impressions of the plastic Mahdists are very positive indeed.  I have a couple of minor reservations but they will have to wait until I have painted some up.
Can't write much more tonight as I have to prepare for a panel discussion I'm on tomorrow with a government minister, so I better try and sound intelligent!
Posted by legatus hedlius at 10:07 pm 2 comments: 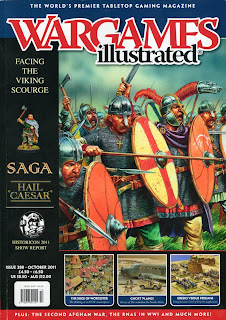 I picked up this month's Wargames Illustrated which, featuring as it does a lot on Vikings and Saxons, is very much up my street.  Other than yet another look at the battle of Maldon using Hail Caesar there was an interesting piece on Gripping Beast's new Saga Dark Ages skirmish rules.  Both these pieces exemplify a slightly worrying trend for me, as a hopeless dabbler in multiple periods, which I can best describe as army creep.
Saga is described as a skirmish set and yet they were talking about forces of around four to five dozen figures a side.  Now they say that it can be played with less (two dozen figures a side) but the larger figure seemed to be the sort of numbers of miniatures they were contemplating.   Now, to me, a skirmish wargame should be about 10-20 figures a side, not sixty.  The Lord of the Rings Battle Companies games I play with my son gives  good game with less than ten figures a side.  So what is this sixty figures a side nonsense?
It wasn't clear how many figures were deployed on the Hail Caesar Maldon scenario, but looking at the photos it looks like at least 400 figures a side. Also in that issue is a Black Powder Second Afghan War clash which has armies of over 500 for the Afghans and over 175 for the British.  Now of course, Games Workshop no longer supports Battle Companies, no doubt on the basis that forces of ten figures a side aren't going to help shift figures.  When you have manufacturers developing rules then, naturally they are going to want to sell as many figures as possible, but for me moving from 150 figures a side to 400 figures a side just makes building armies impossible. Interestingly, there was also a Greek and Persian game using the new Clash of Empires rules and these had what I would consider much more normal numbers of figures a side (175 ish).
So are we in a period of army creep?  Are these rules only designed for club play where you need multiple players to help field each side?  Oddly, it seems to me, big armies with lots of figures would tend to militate against a game played in an evening at a club.  My experience of the bigger games I have played at Guildford (mainly Colonial, Dark Ages, ECW and Ancients) is that we rarely get to finish a game in the usual three hours we have.  I have always derided the DBA players and their silly little armies of forty figures but are we now heading too far the other way?  Is bigger necessarily better?
Anyway, the more I read the Clash of Empires book, which I picked up recently, the more I like the look of the rules.  I think Guy and I will try them out over half term with some Romans and Celts to see how they go. 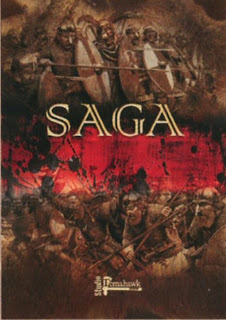 As for the Saga rules, they certainly sound interesting but may be too boardgame-like for me.  There is a lot of husbanding and utilising resources, tactics and "tricks" which is not really my thing.  There are a core of boardgamers at Guildford and I suspect they will like these rules but I think they sound like too much hard work for my increasingly age-demented brain.   I do not like studying rules to see where I can gain an advantage.  I don't like boardgames (even Cluedo and such like) or card games or anything that involves having to think too much!   So Saga, I suspect, will not be for me.  I'll probably buy them anyway, though! 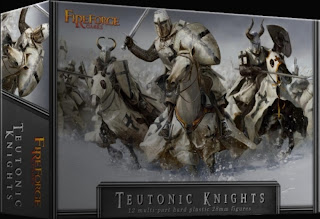 Now of course I am always tempted by interesting new figures and one advert that caught my attention in Wargames Illustrated was for an Italian company Fireforge Games (whose website was launched today) who are planning to release a box of plastic Teutonic knights.  I have always wanted some of these, partly due to the amount of time I used to spend in the Baltic States, and these look excellent.  I looked at the Gripping Beast ones long ago but they suffered from the dreaded Gripping Beast horses (frankly I find the new ones just as horrible).  Excellent artwork (cf Wargames Factory, for example) helps a lot but the images of the planned figures look brilliant with lots of optional heads and what have you to customise the figures.  These will be a definite buy!

I'm not getting much painting done although I am slowly and surely progressing with another small batch of Norman infantry, have nearly finished another couple of Darkest Africa characters and am enjoying painting my 18mm Copplestone Castings fantasy figures.  More of these were released this week but I am going to have to think about what to do with them!

Right, time for a bit of static grass on my Darkest Africa figures!
Posted by legatus hedlius at 7:44 pm 5 comments: 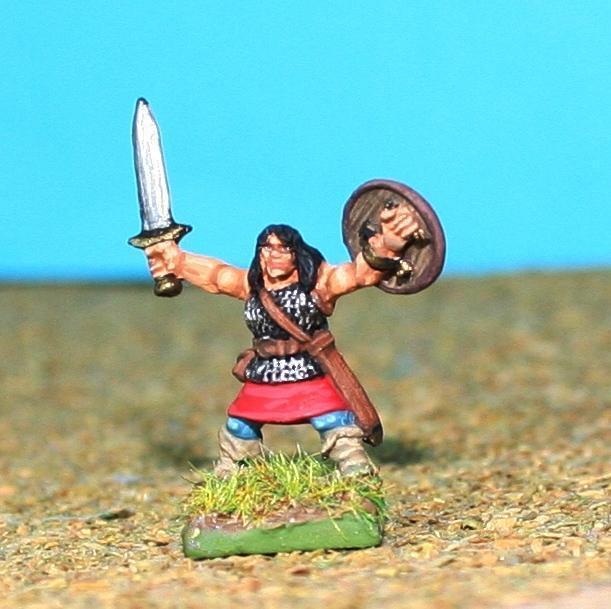 I've been struggling with getting any painting done of late but I did manage to finish my first of the new Copplestone Castings 18mm fantasy figures.  I have to say it took as long to paint as a 28mm figure but now I have one done I will aim at doing a few of his Northlanders next.  I'm not sure about a whole force of barbarian types as I tend to think of all the figures in the pack (apart from the two girlies) as Conan but with different clothes on. Maybe if I paint some with different hair colour they could be Cimmerians, I suppose. 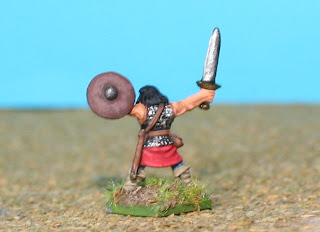 I've not done very well at finding any 15mm Hyborian type scenics, much to my surprise.  Oh well.  I'll have a look at Warfare, I suppose.
Posted by legatus hedlius at 5:57 pm No comments: