The workbench at present is mostly Darkest Africa Ruga-ruga and Ngoni, plus four ECW musketeers I am not going to get done for Monday's game. Behind we have another half dozen Great North War figures then a couple of Gladiators, some Sudan, a few Spartans, some Lord of the Rings and some cavegirls (and cavemen).

Still enjoying painting the Ngoni but might push the GNW figures forward a bit. I have three days in Geneva this week, though, so that will eat into the painting time. I'm back a week and then I have to go to Libya, Egypt and Jordan for ten days so things will slow down a lot.

I have just received my pre-order of Crusader's new Late Romans which are, much to my delight, compatible with my Black tree Design ones. I won't start them until Steve at Little Big Men has some shield transfers done.
Posted by legatus hedlius at 10:58 pm No comments: 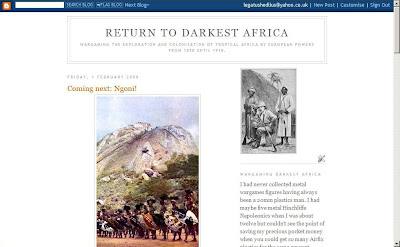 Keeping so many blogs up to date is a job in itself and occasionally I scan the list of posts to see if one of them is particularly unloved and try to finish a few figures for the relevant period. Over the last two weeks I have got some figures finished for these three blogs:

Although I have updated Cavegirls in Fur Bikinis they aren't wargaming entries so I haven't included them.

Posted by legatus hedlius at 8:15 am No comments: 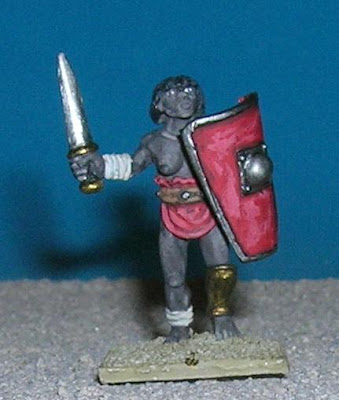 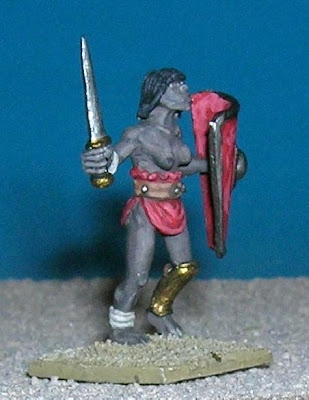 This is a Foundry female Samnite. The first recorded account of female gladiators was under Nero who arranged a games that featured many types of fighters, who were all Africans, including women. 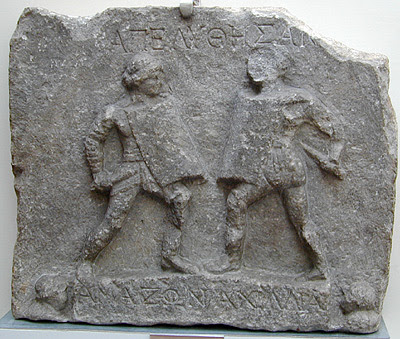 There is certainly evidence that women fought as animal fighters (venatores) and one compelling piece of archaelogical evidence that they fought each other fully equipped: a memorial stone for two women named Amazonia and Achillea (stage names, of course) from Halicarnassus (modern Bodrum in Turkey) now in the British Museum.

Although women gladiators did fight bare breasted on occasion it is more likely that they wore a piece of material across their busts. My African girl doesn't care for this, however! Of course they would have done best to fight with as little clothes as possible as many sword injuries went septic due to strips of, none too clean, cloth being pushed into the wounds. This was the reason that Baroness Lubinska advised Princess Pauline Metternich and the Countess Kielmannsegg to fight topless in their 1892 duel in Vaduz, Lichtenstein. The cause of this extreme behaviour? The floral arrangements for a forthcoming musical production. Women, honestly! 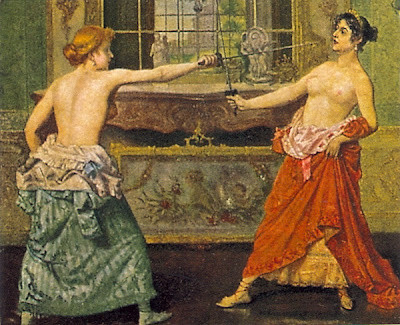 Aristo babes in armed topless catfight shock! I quite fancy the one on the left!
I've just read a very rude novel called Africanus: Arena of Torment about a gladiator girl who seems to spend much more time being tied up and flogged than she does fighting in the arena! It's amazing what fine literature you buy when faced with another long business trip! Nevertheless, this makes me call this gladiatrix Africanus. Or perhaps it should be Africana? I'd better ask my daughter who is far better at Latin than I am!
More on girlie gladiators next time I paint one!
Posted by legatus hedlius at 10:42 pm 1 comment: 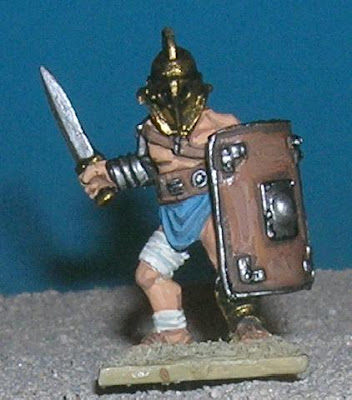 The secutor was the traditional opponent of the retiarus. Normal armament was a gladius and he (or she) was protected by an oblong or square shield, an armoured manicus arm guard on his sword arm and one greave on his shield-side leg.


The most distinctive characteristic of the secutor was the heavy helmet with the small (35mm) eyeholes. This was so that the retiarus could not thrust his trident at the face. 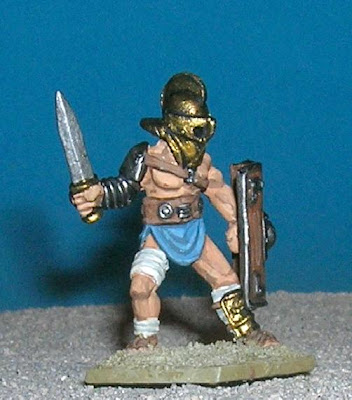 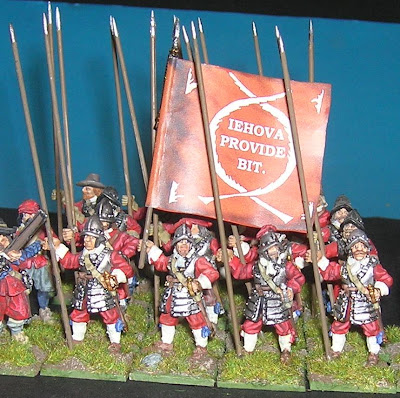 Now there is a fundamental flaw with my unit and that is that they are armed with normal matchlock muskets, whereas the THTB had firelocks. These they used to great effect at Cropredy Bridge (their only action) when they put lit matches on poles on the bridge for the Royalists to shoot at at night whilst they shot back from below the bridge with their firelocks. At the time I painted most of the unit you couldn't get figures with firelocks but now Bicorne do them so at some point I will replace all the musketeers with firelock men and use the musketeers as the basis of a new unit.
Posted by legatus hedlius at 7:35 am No comments:

The Earl of Essex 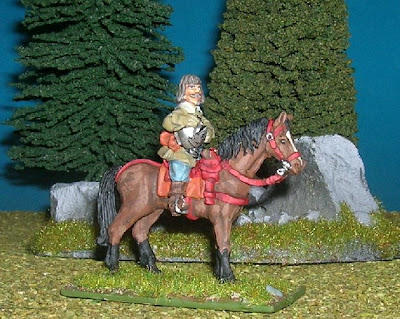 This is my Bicorne Miniatures model of Robert Devereaux, The Third Earl of Essex, (January 11, 1591 – 14 September 1646) who acts as General of my rather small ECW Army of two units of foot and one of cuirassiers.
The Earl of Essex's father, also named Robert, had been executed for treason in 1604 and his mother, Frances Walsingham, was the daughter of Sir Francis Walsingham, Queen Elizabeth I's head of intelligence.

Following the accession of King Charles I, Essex became a Parliamentarian and led the Roundhead army at the beginning of the English Civil War in 1642, notably at Edgehill. He then commanded the forces at Turnham Green, which blocked the far smaller Royalist army from entering London; the Earl's forces having been boosted by the presence of the London Trained Bands and the Royalist's not being prepared at this stage, to force battle on a large group of, essentially, civilian Londoners.

His campaign in Cornwall was largely disastrous and his forces were pummelled at Lostwithiel, much to Cromwell's annoyance. He resigned his position in 1646 and died the same year. So why do I have him as my army general? Firstly, because we share a birthday and secondly his colours were orange, which was my favourite colour when I was little!

Posted by legatus hedlius at 7:12 am No comments:

I actually got along to the club last night for the first time since last April! We played an ECW game using 1644 rules by Wargames Foundry, which I haven't played before. They are by Rick Priestley and so some of it is familiar from Warhammer ECW but there are some differences; notably the fact that you need markers to show the status of the morale of units and also to show intention to do things like charge. 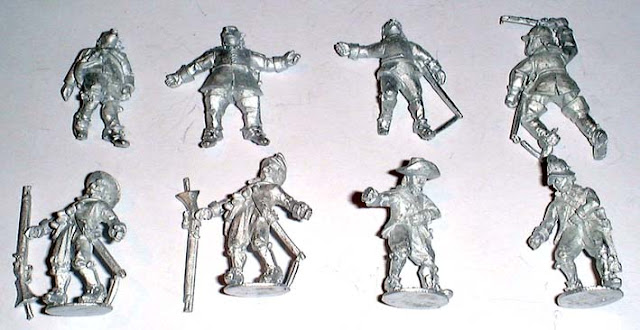 Personally, I don't like little signs on the wargames board so I might think about getting some wounded and dead figures to act as morale markers. Most of my figures are Renegade, with the rest being Bicorne. Bicorne do a nice casualty pack so I will pick this up and do some casulaties in the colours of my two completed regiments. The only problem we had with the rules was that we ran out of time. We played for about three hours but probably needed another hour to bring things to a conclusion. Part of this is the fact that foot only move four inches a move and cavalry eight and so take ages to come into contact. I didn't help by deploying behind a nice hedge and staying there, making Nick trudge across what seemed like miles of fields to get into contact.


Unlike WECW, casualties are small, with only one or two figures lost per unit for each round of firing or melee. Given that we had 36 man units, and loss of figures itself does not seem to trigger morale tests, the engagements turned into slogging matches. Actually, I quite like this and if we had been more familiar with the rules we would probably have gotten along faster. Other peculiarities we found were the ineffectiveness of cavalry against infantry. Because the infantry units were so much bigger they could just pound away at the cavalry and reduce their numbers move by move (or at least until they are hit in the flank by a charging unit of Dragoons, which was the fate of my cuirassiers. 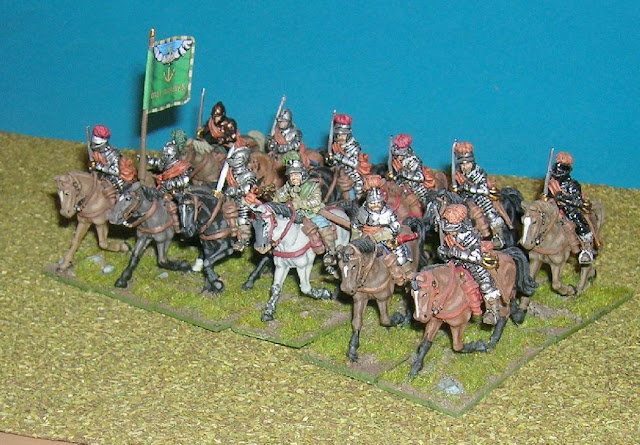 Sir Arthur Hesilrige's Cuirassiers: destroyed by some motley Dragoons. It's enough to make you jump off a cliff

Cavalry, to be effective against infantry needs to have a wide frontage and get another unit to pile in in support. The other issue was that we had quite a lot of units on the table. For Parliament, Adrian and I had seven Infantry units and four cavalry units, plus four light guns. We are going to have another go in a few weeks, which would be good. In the meantime, I might fight a few test skirmishes against my little boy to get a feel for the best size for units etc. This is important as having more figures firing makes such a small difference to the hits you might have that it may be best, for example, to have three smaller units that one big one. It was nice to play a game again and has got me keen on ECW once more, so I might try to paint another unit of cavalry in the next few months.
Posted by legatus hedlius at 10:56 am No comments: 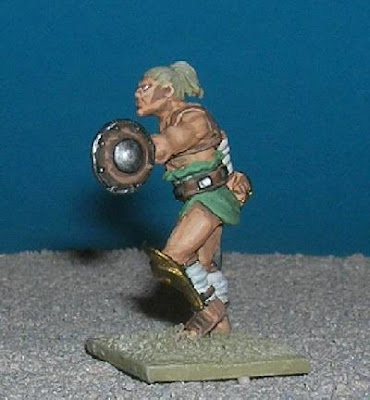 This Foundry Thracian is not the first gladiator I have ever painted as I did some back in the early seventies (Miniature Figurines, I think) and played the Pendragon Rules against some school friends.

He has two greaves (ocrea) over a cloth fascia, a metal arm defence (manica) and a typical curved sica. Less typically he is not wearing a helmet and has a small buckler (parmula) rather than the more usual small square shield (althought both were used). The Foundry figures are mostly depicted with sandals but gladiators are largely belived to have fought barefoot. 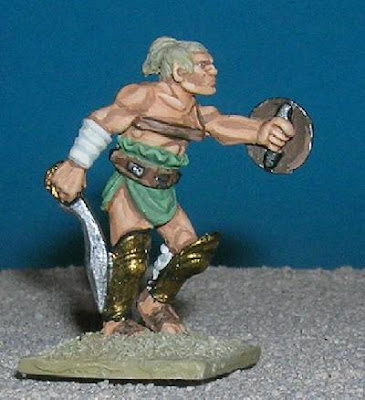 His usual opponent would be a murmillo, dressed in a stylised legionary fashion, just as he was supposed to represent one of Rome's barbarian enemies.
Posted by legatus hedlius at 10:40 pm No comments: