Two weeks lost in the desert 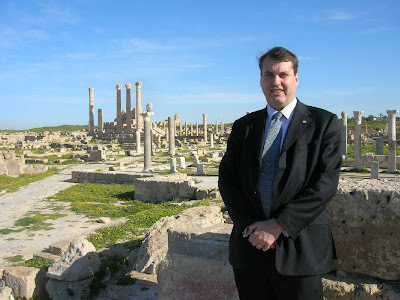 On location in Sabratha.

I have been away on business for nearly two weeks so haven't done any painting at all. Fortunately we have the Easter holiday and so I have had a good go today, getting some Ruga-ruga and a Pulp figure finished. I need to paint 24 figures this month to keep to my schedule so that is going to be a challenge!

Quite often when I travel I get inspired to paint some figures from where I have visited and this trip was no exception. I started off in Tripoli and actually manged to get four hours off. Just enough time to visit the Roman city of Sabratha. It is in a beautiful setting by the Mediterranean and is one of four extant Roman cities you can visit in Libya. The problem for tourists is that there is only one western hotel in Tripoli and it costs €400 a night. In addition, I had to get a visa, which cost about £400 and took five weeks to arrive. Good job I have another passport. 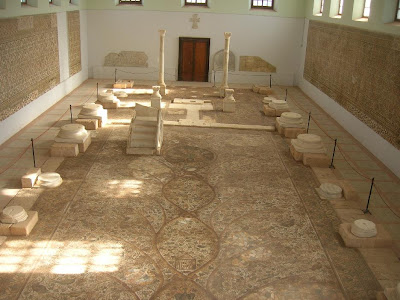 Mosaics in the museum at Sabratha.
Sabratha is a lovely site with some great mosaics (many still in their original settings which are now outside, of course) about 40 miles from Tripoli. There were about ten other people there when I visited. 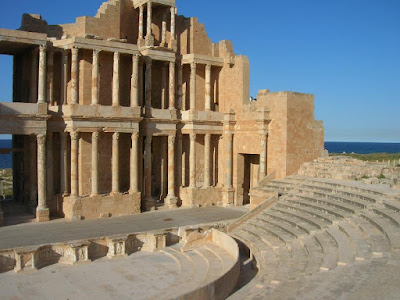 The theatre by the sea.
The most impressive remains are those of the theatre. What remains now is mostly 3rd Century AD but there are some earlier buildings too. 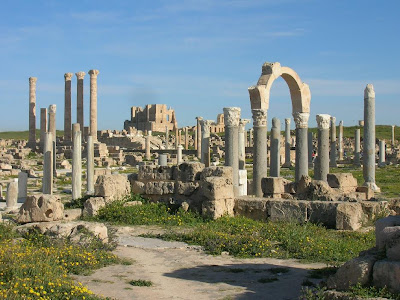 Next I went to Cairo again. I didn't have time to see anything on this trip but I did the pyramids and the Cairo Museum last time.
Finally, I went to Jordan, a country I had not visited before, and went to Aqaba and Amman. I found Jordan impressive in many ways: good food, attractive women, nice hotels and a switched- on government. I didn't get a chance to go to Petra but it looks like I may go back in May so will try to do that then. I did get a chance to walk around the Roman ruins in the centre of Amman, though. 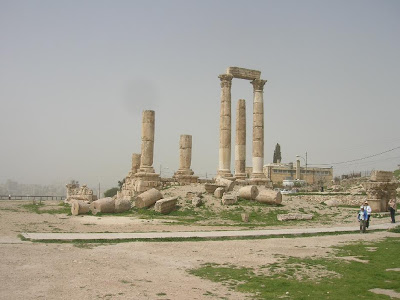 Roman ruins in Amman
On the Wargaming front I felt inspired to do more late Romans. I also want to get some Egyptians done for the Sudan. Oddly, visiting Egypt doesn't make me want to do Ancient Egyptians. I am more interested in nineteenth and early twentieth century Egypt, fortunately, and this craving is satisfied by the Sudan War and, possibly, some 1920s Pulp adventures. The trip to Libya got me thinking about WW2 North Africa again so maybe I will pick up some figures (Artizan ones) at Salute. 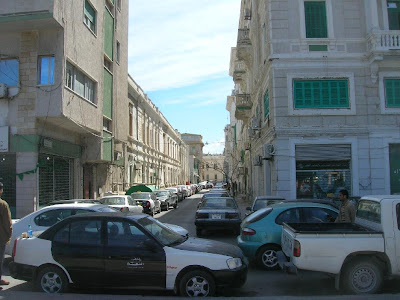 Italian buildings in Tripoli.
Tripoli still has many Italian style buildings so maybe I should do an Italian army instead of the usual Afrika Korps. 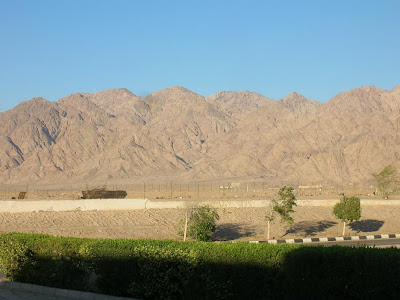 The mountains behind Aqaba

The last period I got thinking about was WW1 Palestine. Arriving in Aqaba airport at dusk and seeing the rose red mountains that lead down to the port city got me thinking about the attack on Aqaba scene from Lawrence of Arabia. That sequence was actually shot in Spain but having just watched it again they managed to find a location that mirrored the real one very well (albeit on a smaller scale). The Hejaz railway. As regularly blown up by Lawrence of Arabia.
I bought Michael Asher's book on Lawrence when I got back as I enjoyed his one on the Sudan Wars so much. Oddly, no-one seems to make a proper range of Arab revolt figures in 28mm. Brigade Games have a few, including Arabs on foot, but you really need Arabs on horses and camels. Never mind, as it looks like the new Gripping Beast project, The Woodbine Design Company will be doing Palestine at some point.
Posted by legatus hedlius at 9:23 pm 1 comment: 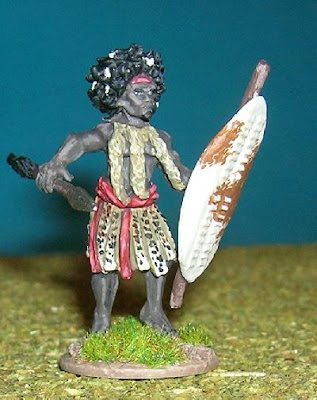 Another good month, with 36 figures painted, much better than last year's 14. I have painted 69 figures in nine weeks which is 7.6 figures a week so I am 15 figures up on my target.

I didn't manage any Great Northern War figures this month but I guess the ECW ones count towards my Pike and Shot allowance. I was also pleased to finish my first unit of Early Saxons. The darkest Africa figures are a bit of a diversion but I am enjoying painting them even though they are quite time consuming.

This month is going to be difficult as I am in Libya, Egypt and Jordan from next week for ten days and then Poland at the end of the month. I am hopeful I will be able to finish five more Ruga-ruga before I fly to Tripoli on Saturday. When I get back I want to get on with some more GNW and progress my first four Sudan Highlanders.
Posted by legatus hedlius at 9:10 pm No comments: In February Cavegirls in Fur Bikinis continued to pull in over 250 hits a day on average but the biggest climber this month was Pulp Warriors up from 10th to 2nd with nearly 5,000 hits. I'm not quite sure why there was this big jump but I'd better get some more content on this month!