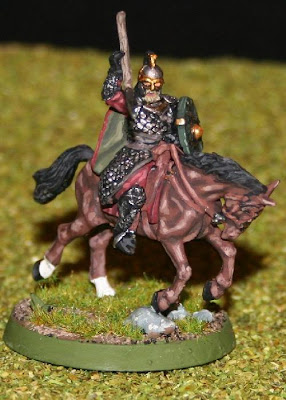 The first month of the year I painted:

This makes 18 figures altogether, 6 short of my normal target of 24 (6 per week). I need to do better in February to get everything painted for the SOA Battle Day in May.
Posted by legatus hedlius at 9:25 pm No comments:

Given what I am getting rid of what should I be planning for over the rest of the year?
Punic War and Greeks
At present I am working on troops for the Society of Ancients Cynoscephalae Battle Day in May. I have painted two legions of Punic Romans and am now doing some Greek auxiliaries that I can use to form part of a planned Greek Mercenary force. I have Italian allies to finish as well.
Spanish
I was going to paint a Carthaginian army to field against the Romans (given that I already have a hefty number of Celts). The new Crusader Spanish looked really nice so I bought a bunch of those and I will turn to those on the basis that Little Big Man studios have some shield transfers out by then.
Age of Arthur
The new WAB supplement is fabulous and I already have half a unit of early Saxons painted. the fact that there are no cavalry to paint for this army is very appealing!
Sudan
I have around 20 Perry Beja started (and over 35 finished). These are very quick to paint and I'd like to get enough finished for an army this year. I reckon about 80 infantry and 20 cavalry would give a good force to start with and this is achievable. I got a whole bunch done on holiday last year and there is no reason I can't get some more done this August. The problem is that the British take longer but at least you don't need so many!
Vikings and Carolingians
Finished two big units of Vikings with another well under way. The Carolingians make a nice complement (and an opponent) so will continue with these definitely.
Phew, I think that is enough for 2007!
Posted by legatus hedlius at 3:39 pm No comments:

I have decided that there are so many armies I really want to paint that I should stop pretending with those that I know I will never paint! Given that I am running out of bookshelf space then the various supporting Ospreys etc will have to go too.
The first armies to bite the dust will be:
American War of Independence
This is hard given the lovely Perry figures and the fact that I have always wanted to do a woods and lakes of North America type scenario. But I have come to accept that horse and musket figures are so time consuming to paint (all those cursed cross belts and buttons) that I would rather hang on to the vague possibility of doing Napoleonics one day. My pine tree and water fetish can be fulfilled by the lovely Conquest French Indian Wars figures-especially as there is a The Sword and the Flame variant for them and you wouldn't need too many figures.
http://www.conquestminiatures.com/french&indianwar.htm
Hundred Years War
OK, I haven't got any figures but I have bought several books on Agincourt inspired largely by the book The War Game which I got for Christmas when I was about 11. It had a lovely recreation of Agincourt using Peter Gilder's figures. The Perry figures, again, are gorgeous but the thought of painting all those heraldic devices..! I am happy with my Wars of the Roses army for this period.
Goths and Late Romans
I have some Newline Goths bought at a time when I was considering a Late Roman Army. I also bought some Black Tree Designs late Romans. As I am already painting EIR, MIR, Punic and Caesarian Romans I can't see myself getting round to these in the near future. If I did I would probably go for Gripping Beast as they have opponents as well.
Egyptians
This is quite a tough one as I have quite a few of these but if I do Bronze Age I am much more attracted by the Foundry Bronze Age Northern Europeans and Trojans.
So big stuff on ebay over the next month or so.
Posted by legatus hedlius at 2:58 pm No comments: