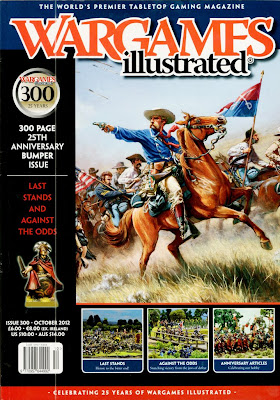 I've got half a day free to paint today but I feel so ill I don't think I'm up to it which is really frustrating.  Maybe I'll have a Lem-Sip and see how I feel after that! 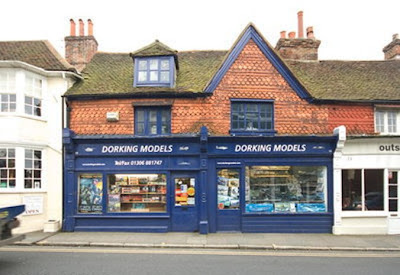 I went to Dorking Models yesterday as I have been having difficulty getting the plastic model filler I use for the bases of my figures.  Dorking is an excellent old-style model shop but really for plastic kit builders and railway stuff. They do sell 1/72 plastics and have an excellent selection of those as well as AFV models in the same scale.  I'm sort of surprised they don't stock 28mm plastic figures but there is probably no space left for them (and it's probably just as well they don't!).  Anyway, I picked up a couple of tubes of Humbrol's plastic filler, which is my favourite (the Revell one is a little bit too runny for bases). 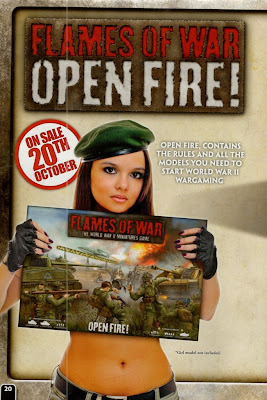 You know you want it

While there I popped into Smiths and got the 300th anniversary edition of Wargames Illustrated.  This really is an epic issue and reminded me, in a way, of those huge anniversary Playboy magazines from the seventies. As Guy would have said, when he was small, about a large book "Isha fudder!"  Lots of interest for me in there as they have articles on the Spartans at Thermopylae,  Spartacus (part of a series on last stands), Romans in Mona, a truly epic Saxons v British battle, a Dark Ages skirmish, Agincourt, the British Army from 1670-1704, ACW, Isandlwana and much more.  Proportionately, not too much Flames of War, although I think from their advert in this month's issue they have just openly identified their target market for the first time.  I've always had a vague thing about doing WW2 gaming, particularly in North Africa, but, from what I have seen of it, FoW suffers from the Warhammer 40K problem of too many tanks too close together and doesn't even purport to give a resonable recreation of WW2.  I suppose it is directly designed to get children to move on from W40K to historicals and that's probably a good thing but it looks wrong visually for me.  On a normal sized board I would imagine a WW2 game as having no more than 40 figures a side and maybe one tank.
Posted by legatus hedlius at 1:10 pm 5 comments:

Still around...and even doing some painting 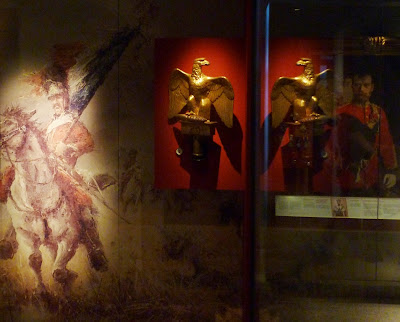 I've just been catching up with everyone else's blogs and realised that it is ages since I have posted.  This is largely because I am working on a new contract which is taking up all my time and am trying to avoid taking on some international trips. However, it looks like Serbia and Dubai are on the cards in the next two months and maybe another couple of long haul trips as well.  I did fly to Edinburgh recently and fortunately it was smooth flying in both directions so I'm not too stressed about it yet. 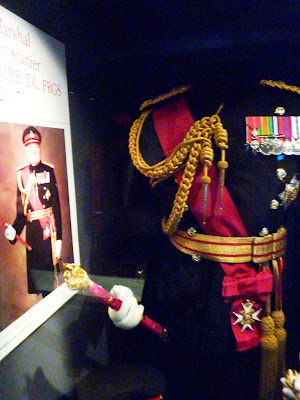 I managed to visit the small but interesting military museums at Edinburgh Castle when I was there and was amused to see the uniform of the late Field Marshal Sir John Stanier on display there. About twenty years ago I was on a flotilla holiday in the Ionian with my girlfriend and future parents in law and Sir John was on one of the other boats.  He tried windsurfing for the first time but fell and got stuck between the board and the boom, face down in the water.  In classic Baywatch style I dived off our boat and extricated him.  He was jolly grateful and I was plied with huge glasses of Sangria as a thank you on board their yacht.  Too late I discovered that the Sangria was made from red wine and gin rather than lemonade (they didn't have any lemonade).  Swimming back to our boat was, as a result, somewhat enervating and it was lucky I didn't need a lifeguard myself (Erika Eleniak, please, not Pamela Anderson). 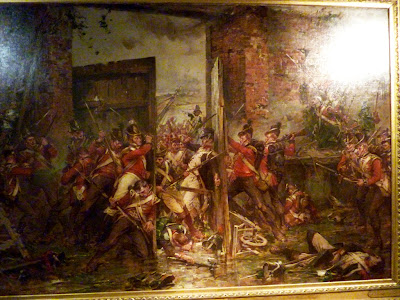 They had some very famous battle paintings of Scottish regiments in the main war museum in the castle including Closing the Gate at Hougoumont by Robert Gibb and Alphonse de Neuville's Tel el Kebir depicting the Black Watch.  It nearly made me want to paint some highlanders.  Nearly.  They also had the eagle of the 45th Regiment captured by Sergeant Charles Ewart of the Scot's Grays at Waterloo. I was very excited to see that!  I don't think I've seen an actual eagle before.

I have had to clear nearly everything of the workbench as I needed the space for actual work.  I now only have one set of figures on it and managed an hour or so on them today.  I'm hoping to do some more tomorrow.  They are plastic and I am actually enjoying painting them for a change.  Other than Lord of the Rings I haven't ever painted more than a couple of figures out of the two dozen or so boxes of plastics I have picked up.  For this set, however, I have seven figures well on the way and another 17 on the go.  The odd thing is that I never considered buying these but was passing Orc's Nest with a friend and she made me buy them.  I have had to go and buy a load of books on them as I had very little information on them.  It's going to be a unit of about 26 figures and I don't know whether to put them on here when the unit is finished or just put on the first half dozen when I get those done. Hmm.

Away from these, the big temptation at present is the fact that Warlord Games are now selling Conquest's superb French Indian War range in the UK.  I actually have the first eight packs or so of these but never painted them because it always looked like the line was about to fold.  Now, however, I have no excuse.  Now where on earth is that one I started four years ago?
Posted by legatus hedlius at 11:32 pm 10 comments: 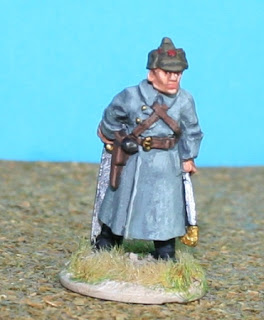 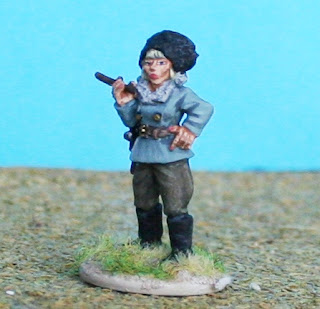 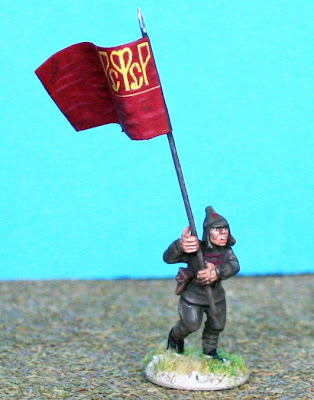 I really enjoyed painting these Copplestone Castings figures and have enough for another unit of Russians so may base these soon.  I had terrible trouble trying to find early Soviet flags on the internet so had to resort to painting this one myself.  It is the first national flag for the USSR which was used until the hammer and sickle flag was introduced in 1923.
Posted by legatus hedlius at 2:30 pm 1 comment: 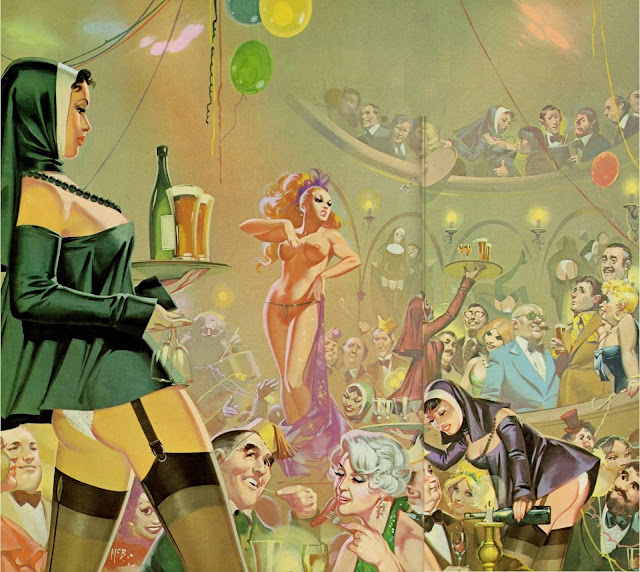 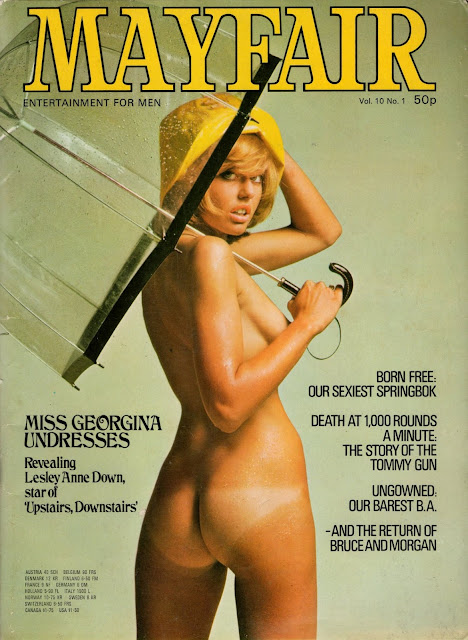 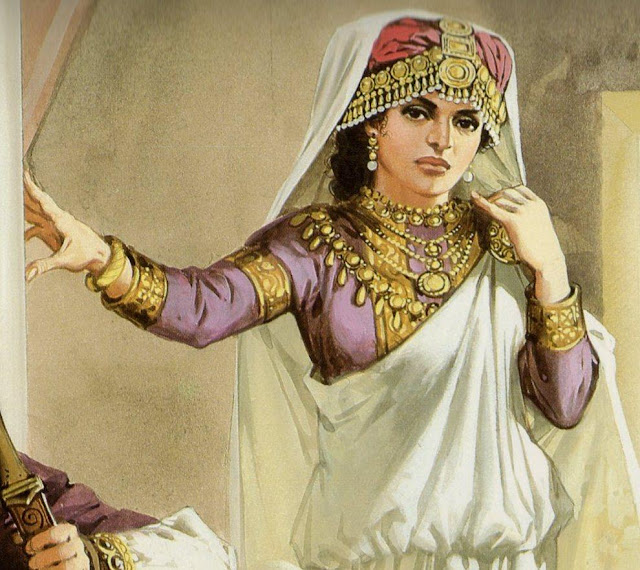 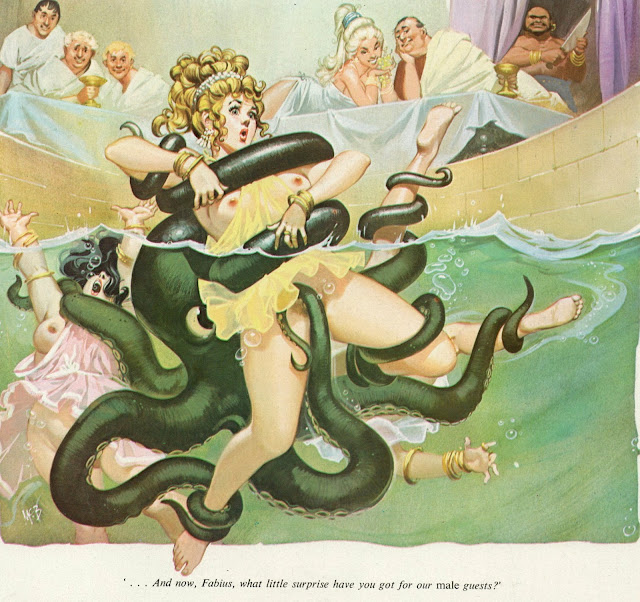