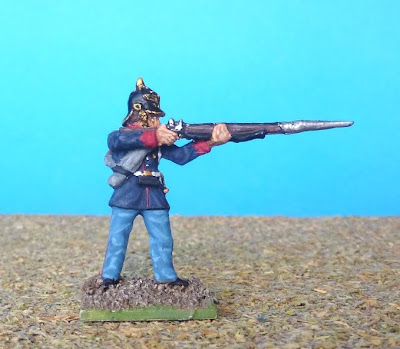 I am nothing if not easily influenced so when I saw Matt's latest posting about his lovely Schleswig figures I spotted that I had one of his Schleswig infantryman undercoated at the back of the workbench.
http://matratmatt.blogspot.com/
"I know, I'll finish it now!" I thought, putting on some Carl Nielsen to listen to. Lo and behold I had him finished in the time it took to listen to his first two symphonies and the Helios overture. 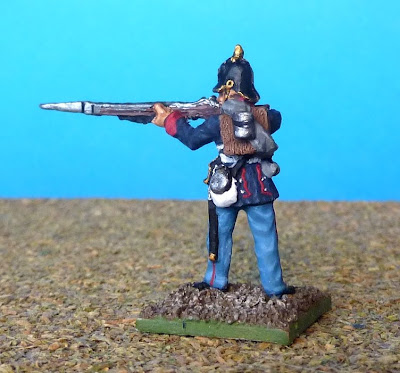 I found him easier to paint than the Dane and in a way, as the figures are very slight, it was almost like painting one of the bigger 20mm plastics. Its amazing how having finer proportions means less area to cover and, consequently, quicker painting. I have another seven Schelswig infantry (and a lot more Nielsen to listen to) so they will be filed and based tonight.
Since the advent of the Black Powder rules I am looking at nineteenth century wargaming much more again so maybe its ime to build a unit or two.
Posted by legatus hedlius at 2:43 pm 1 comment: 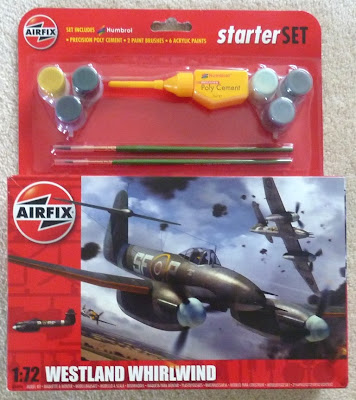 I was intrigued by Fraxinus' post on his Victory V blog about the Britmodeller's Airfix starter set group build. http://fraxinus-victoryv.blogspot.com/2010/03/britmodeller-airfix-starter-set-fun.html

Whilst wandering around Hamley's this week I came across this Westland Whirlwind kit and immediately felt inspired to have a go, despite the fact that I haven't finished an aircraft construction kit for at least ten years (although I have started several!).

The Westland Whirlwind is a plane I had actually completely forgotten existed! It wasn't in front line service for very long (it was replaced by the Hawker Typhoon) but it has that great mid-Thirties twin engine look (like the De Havilland DH88 Comet racer).

The rules of this build mean you have to use the paints, glue and, worse still, the brushes from the set! The build runs from April 2nd to 1st May so let's hope I can get it done in time. At least I should have a bit of time over Easter!

It will have a wargames life eventually as I will be donating it to my son for his World War 2 "carpet wars" whch take up a large portion of our living room floor at any point in time! 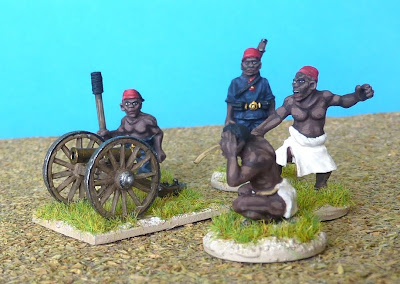 Not really a historical piece, this, but I wanted to give my Belgians something to pound Arab slaver strongholds (not that I have painted any of my Arabs yet!); so it's the Foundry Askari Mountain gun painted up with a Force Publique looking crew. 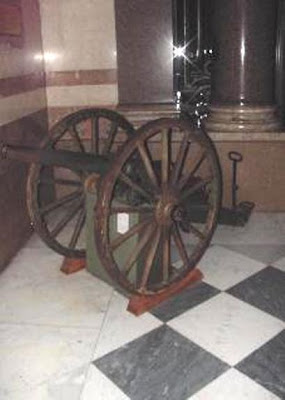 The Force Publique did use a selection of artillery in later years: including Krupp howitzers and Nordenfelt 4.7cm cannons (which were very similar in size to this mountain gun). They also had bronze 7.5cm cannons for use against the Arab slavers so it's not too much of a stretch to give them this.

Next month's artillery piece will be something for my Tudor period swashbucklers which I recently bought on eBay.

Artillery Piece of the Month 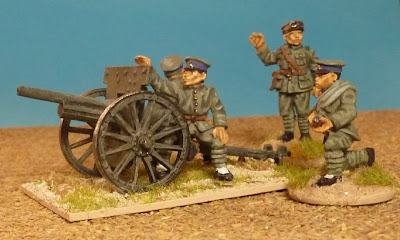 If there is one thing I hate painting more than cavalry it's artillery. I have only painted one artillery piece for my armies and that is this field gun for my Chinese Warlord army. However, I have several model guns floating around at present so have decided to try to get one painted a month. I am starting small with a mountain gun for my Belgian Force Publique force as part of my attempt to boost it a bit from the 48 figues I painted in November. Since then I have painted another 10 figures with five more under way and the addition of the gun will give it a bit more punch. I hope to finish it this weekend./p
I have a new set up for photographing my figures which means that I can use natural light or, as here, daylight bulbs when photographing at night. This removes the nasty flash shadows and also stops washing out pale colours.
Posted by legatus hedlius at 6:37 pm No comments:

Labels: Artillery, Back of Beyond 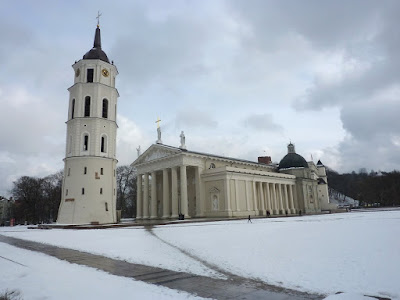 Vilnius Cathedral this morning (strictly, Vilniaus Šv. Stanislovo ir Šv. Vladislovo arkikatedra bazilika)
I don't know why it never occurred to me that it would be snowy in Vilnius in mid-March. I've been here enough times to know that it gets blooming freezing (-25C the first time I came here) but perhaps I thought that by now it would have become a bit more Spring like. Anyway, everything was still covered in snow when I flew in yesterday and it snowed again quite hard last night. It's now nine o'clock at night (two hours ahead of London time) so I thought I ought to get something down on the blog, especially as I found a few pictures on my camera which I can put up here. In truth, I'm waiting for my friend Ringaile but as she is always late I might as well sit and type whilst drinking a Vodka (very good, Lithuanian vodka) Martini and eating too many nuts. 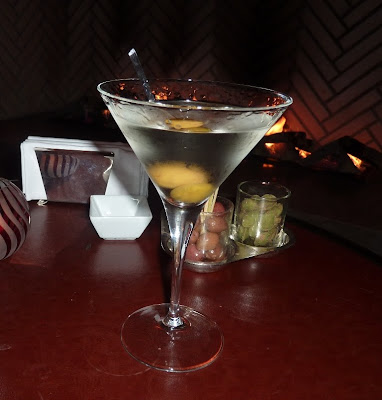 Ideal complement to blogging. Vodka Martini, nuts, olives and a nice fire. Now all I need is a six foot tall Lithuanian girl...

I've done very little painting over the last six weeks as I am just starting up a new company with a friend and its taking up all our time at present. Can't say that we have actually made any money yet but its looking very promising. Stressful but exciting. If you are the mayor of a major city and need an Oystercard type travel card system, or are a defence minister and need a national command and control system do let me know! 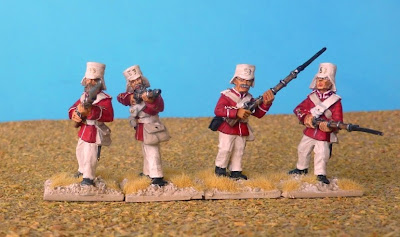 Anyway, last weekend I did get some painting done as I attempted to reduce the number of half painted figures on my desk. I had some success on Saturday as I finished seven of the Mutineer Miniatures Indian Mutiny figures. I've now done eight and have twenty four more on the go. I used the new(ish) Citadel Dead Grass on these which looks quite good. 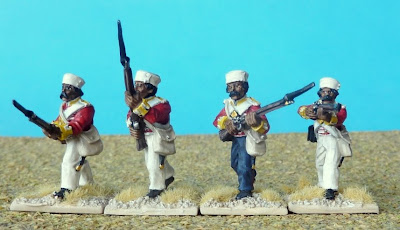 I haven't decided which unit the mutineers belong to so haven't given them a number on their hats yet. I am reading Saul David's Indian Mutiny but it's taken about 120 pages before we have had any wargameable action yet. Once I have a better feel for what units were where and who they fought against I can work out what units to paint. 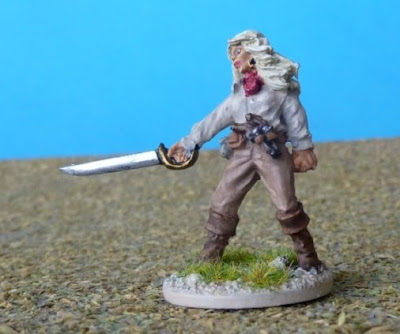 The other big timewaster in the evening, when I could at least be painting some base colours, is that my little boy has got me hooked on Pirates of the Caribbean: the online game. I have never been a computer gamer; I tried Tomb Raider once but found it very boring. All the games Guy has seem too fast moving and complicated for me! I do own one Playstation game (Alias) but that's only because my friend J was the motion capture body double (for Jennifer Garner) for it and I've never managed to play that either. 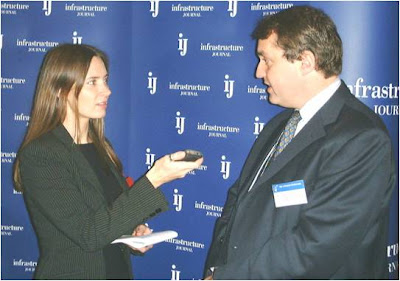 The lovely J was a respectable infrastructure journalist by day, computer games body double and actress by night! Here she has to interview the Legatus when he was at least two stone heavier, in Berlin a few years ago. Maybe I won't have any more nuts!

Anyway, as a result of all this piratical nonsense I decided to paint up some more pirates and finished this Black Scorpion pirate girlie last weekend as well. I also finished another five Force Publique Belgians and should get another ten done by the end of the weekend hopefully. Guy is keen to have a wargame over Easter so we might do a Legend of the High Seas or Darkest Africa game. Anyway, Ringaile is slinking across the bar and I have just ordered a third Vodka Martini so it could be time to stop...