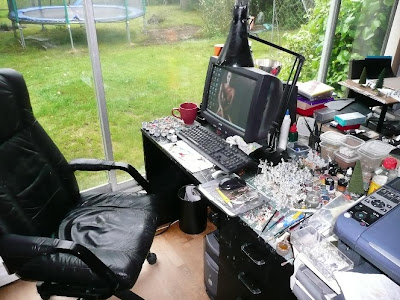 People on The Miniatures Page have been talking about where they paint. I always like to see where people work! This is my desk. I use the small area in front of my keyboard for mixing paints. The keyboard gets covered in paint, of course! I must get a flat screen for my PC as this will give me a lot more space! I keep the paints I am using to the left and in the bigger area to the right are the figures I am working on, brushes, files etc.

Where I am really lucky is having a large south-facing window!
Posted by legatus hedlius at 12:55 am 2 comments:

I finished two more gladiators over the Bank Holiday weekend. Mike from Black Hat Miniatures has re-published the Gladiator Games rules Morituri Te Salutant and I will be playing him next month in a rare trip to the club. http://blackhat.co.uk/catalog/product_info.php?cPath=131&products_id=1483 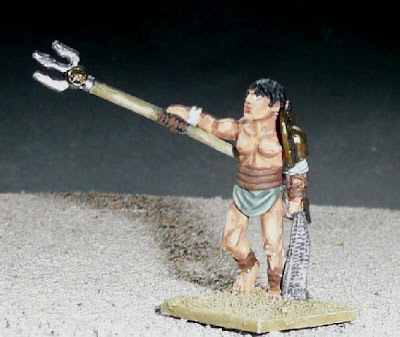 Here is my first Retiarus, which is a Foundry figure from GLAD1/4 Colosseum Champions. Foundry don't seem to give you tridents with your retiarus figures any more but I was lucky and got some off eBay. The retiarus (net fighter) was the only gladiator who habitually fought without a helmet and was armed with a trident, a net and, often, a dagger. His (or her) main opponent was the secutor (see my previous entry: http://legatuswargamesarmies.blogspot.com/2008/02/gladiator-secutor.html) but sometimes they are recorded as having fought murmillones whose helmets were, appropriately, decorated with a fish motif. Retiarii were unarmoured apart from an armguard (which this figure does not have) and, sometimes an armoured shoulder and neck plate on the left arm (galerus) which he does have. The wide belt was called a balteus. 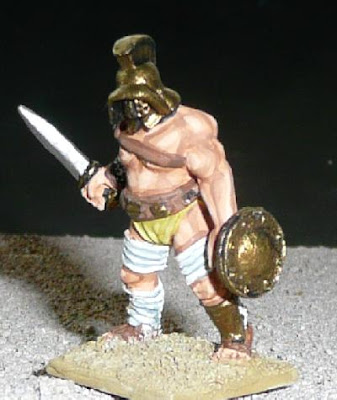 This is a hoplomachus from the same Foundry pack as the retiarus. The quilted leggings are typical as is the (not visible in this picture) armoured armguard (manica) on the sword arm. The had small, round bronze shields and were usually paired against Murmillones or Thraces.
Originally they were supposed to modeled on the ancient Greek hoplite and are often showing carrying a spear. It has been suggested that they hoplomachus was just a later name for the gladiator originally called a Samnite and whose fighting style was similar to those of Ancient Greece. The name change was brought about by the Samnites coming into the Roman Empire and not wanting to offend what were now ex-enemies An early form of political correctness, therefore!
Posted by legatus hedlius at 10:00 am No comments: 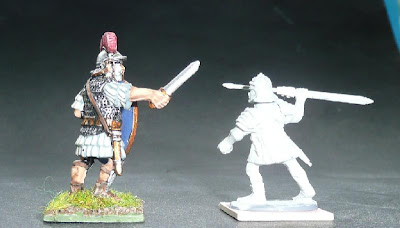 Black Tree Design have always been about the biggest Early Imperial Romans out there and next to the new Warlord Games figure they don't just look like giants, they look like what they are: a completely different scale. I really think that Warlord got it wrong here, sadly, for me anyway. I would have bought boxes and boxes if they had been real 28s.
Posted by legatus hedlius at 7:39 am No comments: 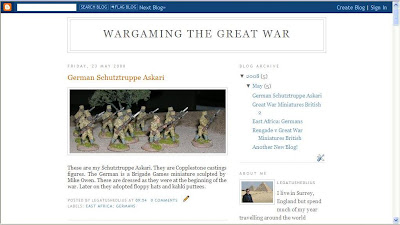 It's months since I started a new blog so I have set one up to cover the Great War! This is a direct result of the new Warhammer rules which I really like the look of. I have put all the entries from my other blogs which relate to World War 1 in there and will put some new material in over the Bank Holiday weekend.
http://wargamingthegreatwar.blogspot.com/
Posted by legatus hedlius at 10:17 am No comments:

I have a lunch in Victoria tomorrow and might try to sneak in a visit to the National Army Museum in the afternoon. Having got interested in World War 1 again I might see if they have any uniforms there to look at.
http://www.national-army-museum.ac.uk/
Once a year I try to take one of my children away for a few days on their own. In ten days I am taking Guy to Brussels where we are going to visit the Royal Museum of the Armed Forces which I remember as being good on the World Wars and aircraft, which he likes. They also have a collection of Force Publique and Azande equipment and uniforms as well.
http://www.klm-mra.be/klm-new/engels/main01.php?id=menu_links/startpagina
Posted by legatus hedlius at 1:28 pm No comments:

Someone was going on about the Warlord plastic Romans on TMP today and someone else said that they had them at Orc's Nest. I was thinking about picking up the new Warhammer Historical Great War rules so this decided me to nip down there at lunchtime today. 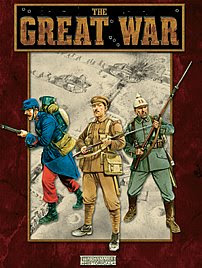 Oh dear. Not only did I get The Great War rules (which look..er, great), but I succumbed to Field of Glory and a box each of the Perry plastic ACW infantry and cavalry. Now, I have put in several orders from the Perries since the plastics came out and have managed to resist them but seeing the boxes in real life I had a 1970's Airfix moment and bought them. 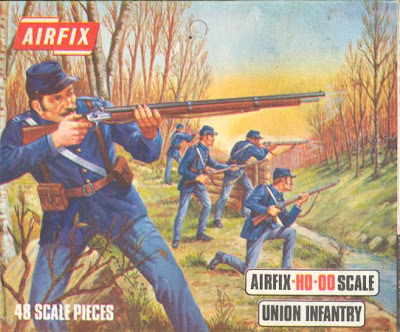 I loved these pictures when I was little. 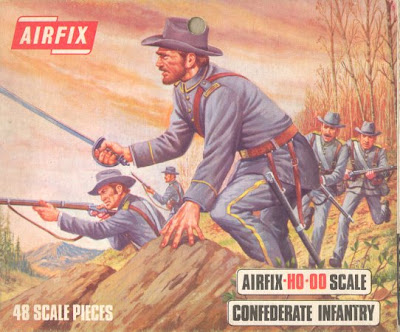 I was getting on well with my Beja and Spartans too and now I know they will all go on hold. Grr! I am determined not to get too hung up on historical accuracy for these figures (I have read the great debate about jacket length) and will use them for a simple game for my little boy à la Introduction to Battle Gaming by Terry Wise, my only wargames rules for many years. 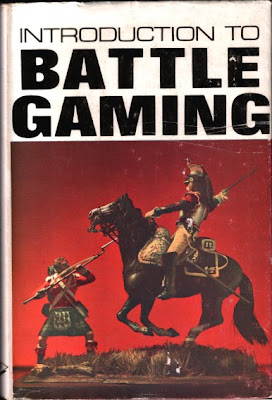 Posted by legatus hedlius at 12:45 pm No comments:

I just took delivery of my Sharp Practice set of rules from The Two Fat Lardies (ghastly name!).
http://www.toofatlardies.co.uk/
The rules look pretty good although they need an umpire which is slightly offputting but maybe someone at the club might want a game. I like the fact that you only need a few dozen figures a side. Lots of Quatre Bras skirmish possibilities, so an excuse to buy more Perry Miniatures (especially now they are planning plastic figures!).
The real reason I bought the rules was for the (not) Sharpe and Harper figures given away with the first 250 sets. There have been otehr S&H sets in the past but I haven't like any of them. I thought they looked a little odd to start with but that is because these are anatomically correct figures. This is a welcome initiative although it does present the problem of what figures will be compatible with them. Hopefully there will be more Richard Ansell sculpted figures for this range (there are some more generic riflemen promised, although I would like to see some with caps rather than all in shakos as illustrated on their website).
http://www.albanminiatures.com/index.php
I have lined them up next to a Perry sculpted Foundry Rifleman and a Perry Miniatures Frenchman. The Frenchman is not as anatomically right as the Ansell figure but is close enough for me I think. So we can see Sharpe and Harper skirmishing around La Haye Sainte at some point!
There are many nice things about the figures not least of which is the fact that Harper is taller than Sharpe. They have also sculpted Sharpe with his French backpack! I have just based and undercoated them and this brings out the detail which is very crisp indeed. I am not sure they look much like their TV counterparts and in fact I think they look more like the paintings from the UK paperbacks of ten years ago. Given this I will probably paint my Sharpe with black hair!
I have been off painting for a bit as the work involved in getting ready for my new high-powered job has been taking all my time but I am really keen to start these two; always a good sign. In fact while waiting to finish this post I have started on their skin!
I have wanted to do some Peninsula figures for ages and if this range grows it could give me the excuse I have been waiting for to buy all those lovely Grand Manner buildings!
In looking up the height differential between Darragh O'Malley, who plays Harper, and Sean Bean (6 inches) I noticed that there is a new Sharpe TV film in Post production, Sharpe's Peril, which like the last one is also set in India.
Posted by legatus hedlius at 9:06 pm 3 comments:

Last month I was writing the Blog Hit Parade in Warsaw airport and today I am doing it in Byzantium! Yes, I am in Istanbul having lots of meetings with banks and not seeing any of the sights. Grr!

The top 9 all stayed the same but Byzantines and Dark Ages swapped positions. Pulp Warriors' share continues to rise with 3,211 more hits than last month.
Posted by legatus hedlius at 7:01 pm No comments: