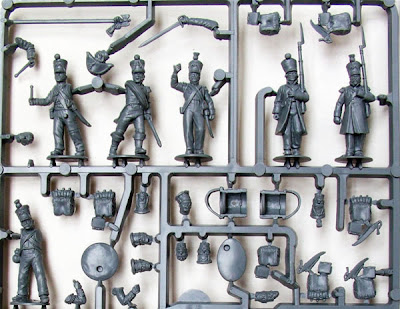 I popped into Orc's Nest today (it's only 400 yards from my office!) to look for a few more Copplestone Ngoni and saw that they had the Perry French Plastic in, so I just had to buy a box. They are absolutely gorgeous; far superior to their rather disappointing ACW figures. Now I can see that I will be basing up French during Strictly Come Dancing tomorrow!
This however, gives me a problem. The figures come with pre cut bases that contemplate 6 Figures on a 40mm base (which I beleive is the norm for General de Brigade). I absolutely prefer to mount my figures on individual bases and make movement trays for them. Especially as I am interested in skirmish gaming for Napoleonics using the Sharp Practice Rules. The rules I used to use for Napoleonics in my Airfix days were the very old school Charles Grant ones which first appeared in Military Modelling in the seventies. These contemplate individual figures (in battalions of 48!) and I suspect that this is what I will go for.


I have always wanted to do portions of Quatre Bras as a wargame and did a lot of research as to the units involved and the numbers of figures you would need (hundreds and hundreds). General Brigade works out at 1/20 but I was thinking about 1/33 which would give French infantry battalions of about 12-14 figures, far too small for the Grant rules. If I combined battalions so that I had four units in, say Bachelu's Division that would give units of about 30: about right.


The great thing about this box is you get 42 figures for £15.00 plus loads of alternative heads and other bits (compared with Warlord's rather stingy 20 Roman Veterans for £17.00).

Now, realistically I have painted exactly five Perry Napoleonics in three years but could this just get me painting them on the production line? I gather that many of the French units for The Hundred Days only had a uniform greatcoat and this would make painting them a lot quicker (about half the figures in the box are so equipped). Can't wait to get home and put the soundtrack to Waterloo on!
Posted by legatus hedlius at 4:30 pm 6 comments: 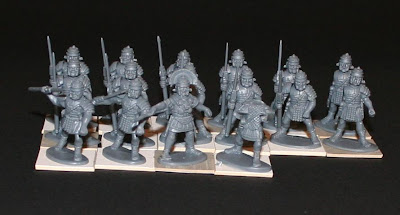 Warlord Plastic Romans
I'm still hardly painting anything at the moment but I'm basing lots of figures. The lack of painting is due to the bad light and a long business trip to the Gulf (I very much recommend The Chedi hotel if you are ever in Muscat). Also, even my weekends have been taken up by visits to potential schools for my little boy, trips to marble suppliers (for the new fireplace) and other nonsense so it looks like my monthly total will be just the four Sudan War highlanders.
The large amount of basing is due to the fact that I do this when watching TV with the family, which only ever happens at the weekends, if there is a dreadful enough talent show to attract my wife. Currently this is her favourite, Strictly Come Dancing, which is only made bearable by very fit young ladies in very small sparkly costumes jiggling about a lot (especially Ola Jordan). however, it is on twice over the weekend which means that I can get a fair few figures done.
The week before last I did some Anglo Saxons and Vikings to start towards some armies for Stamford Bridge. Last week I worked on some of the Warlord Games plastic Romans. With separate heads, and one arm to stick on they take some time but really don't need much (if anything) in the way of filing or sanding. The only issue I have with them is that the loose arm never really fits properly so that the shoulder armour on the arm you have to stick on is not in the same place as the moulded on one. It won't matter once they are painted, I suppose. Another slight annoyance is that I have also based some of Warlord Games' Roman Auxiliaries and they are slighly bigger than the plastics. Again. hopefully they won't be too obvious and they could arguably be strapping Batavians as against squitty little Italians.
All in all Warlord are getting me quite excited about Romans again. I just bought their new box of Veterans, which are nothing of the sort, but Trajanic Romans from the period of the Second and Third Dacian Wars 101-106AD. I will cover these in my Roman blog which I have expanded in time to cover 1st-4th century AD.
http://3rdcenturyromanwab.blogspot.com/ 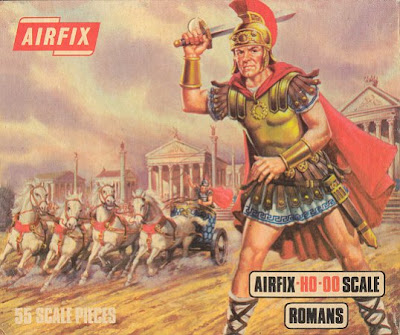 More Trigan Empire than Roman Empire!
They bring back memories of my old Airfix figures. I had hundreds of these and hundreds of Ancient Britons and used to play large games using the Terence Wise rules from Introduction to Battle Gaming. All Warlord need is a nice plastic chariot so I can do chariot racing games!

Painting wise I have started my next four Highlanders and am still working on the next 12 WW1 Germans, and the Zulu War British. I am doing the odd bit on the next Zulus and the Early Saxons too. Trying to concentrate on painting units does seem to be working as a means to restrict me a bit!

This weekend I should have a bit more time so am going to have a push on the Highlanders and the Early Saxons.

Posted by legatus hedlius at 11:17 am No comments:

My Gripping Beast Vikings
My little boy had to write an essay about the Battle of Stamford Bridge this weekend and mentioned that it would make a great wargame. Quite right too! I am sure that some of the magazines have had scenarios before and maybe it was covered in one of the WAB supplements (Shieldwall?). Can't check as I am in Dubai at the moment. At least there is no temptation here to start up another army just becuse I am visiting somewhere!

So maybe I will have to put my Early Saxons on hold and paint some late Saxons! For wargaming purposes I split the Saxons into three periods: Early Saxons from the Romano-British period (Musketeer make the best ones by a mile), early Anglo-Saxons to take on the Vikings (Kind Alfred period) and late Anglo-Saxons (1066 period). Unfortunately they all look different and finding figures I like for the later period isn't easy. Gripping Beast do some but the range isn't very large. Crusader have a nice range but they are from one of his shorter figure ranges. I have some Black Tree Design ones but they are very variable. I quite like the new Foundry figures but they don't have any kite shaped shields (although GB do them). Maybe I will get some of the Foundry Saxons and give some kite shields (I have a few anyway) as the look stylistically similar to my Foundry and Artizan Vikings.
Posted by legatus hedlius at 6:12 am 2 comments: 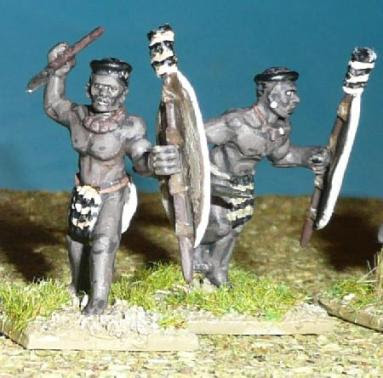 A total of 17, which was not brilliant as I was hoping to catch up a bit. So far this year I have painted 179 figures in 39 weeks; a total of 4.46 figures a week. I fly to the Gulf on Sunday for a week so that isn't a brilliant start to October either!
Posted by legatus hedlius at 9:01 am No comments: