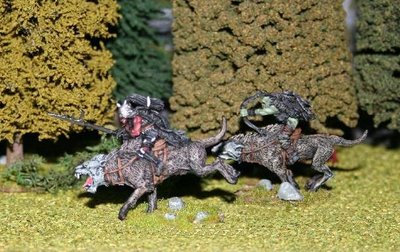 I played a Lord of the Rings Battle Companies game against my little boy on Tuesday. This was our second game. He had Uruk Hai and I had Rohan (but without my Captain as Guy had knocked him out for a game last time). Guy won as usual but having about 6 archers helped. I told him that the new version of the battle Companies rules only allow 30% archers. Rather reluctantly he agreed that as they were killed off in future games he would replace them with normal troops.
In our upgrade session afterwards we rolled for 3 figures I hadn't got painted: a normal Orc, a Warg Rider (without bow!) and I won a Rohan Royal Guard on horseback. He wants to play again on Sunday so I have to get these three painted by then. The Warg rider is the first one finished. Here it is with the only other Warg rider I have done. These Perry designed LotR figures are lovely to paint.
Posted by legatus hedlius at 5:48 pm No comments:

First Figure of the Year 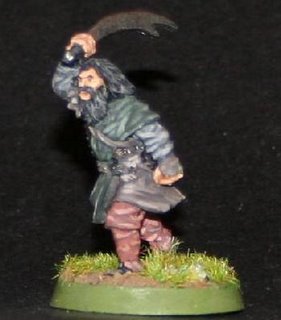 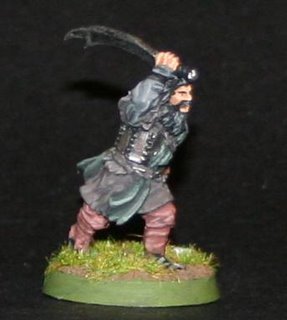 Another year and this year I am going to log the number of figures I paint. I reckon I paint an average of six figures a week so it will be interesting to see if I maintain that!

Although I have been exclusively concentrating on Punic Romans for the last month I'm playing Lord of the Rings Battle Companies with my son tomorrow. As a result of upgrades won in the last battle he needed to add a Wild Man of Dunland to his force. So here he is.
Yesterday my son and I did an audit of our LotR figures. I had thought that I had painted more than I had. Depressing! Having had all 91 issues of Battle Games in Middle Earth the number of figures I have is terrifying!

Back to Velites now..
Posted by legatus hedlius at 7:45 pm No comments: