Paint Table Saturday: Byzantines, Dutch, Indian Mutiny, some Kickstarters and back to school. 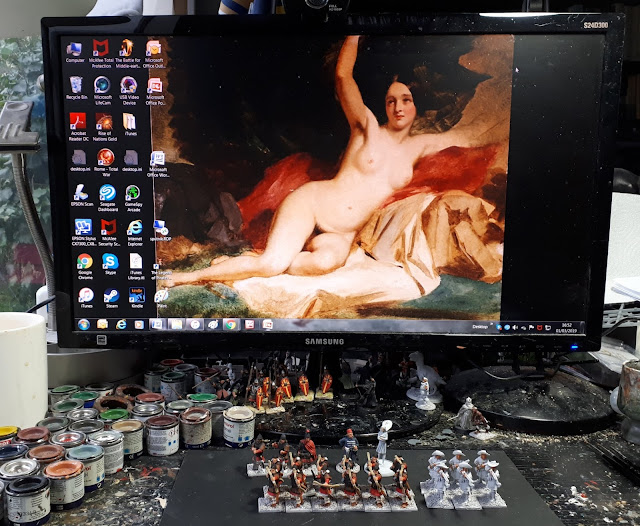 It's a very long time since I have written a Paint Table Saturday post but I am indeed, doing some painting, thanks to the ongoing Sculpting Painting and Gaming Facebook Group (although the lack of a comma in the title continues to annoy me). In theory, you are supposed to paint for 30 minutes a day but what with the bad light and four proposals to get done for work since January my output has dropped a bit. I am not managing 30 minutes a day but I have now painted for at least 30 minutes a week for 16 weeks in a row.  Some weeks I am close to, or even over, the required 210 minutes. 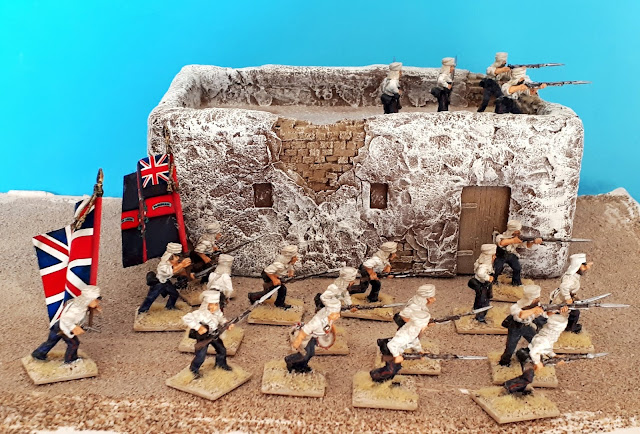 So far in 2019 I have completed 29 figures which is not a bad start for me, given that my bad eyesight makes it hard for me to paint for very long. Last month I finished a unit of twenty figures depicting the 64th Foot from the Indian Mutiny (Iron Duke Miniatures).  I will get some more of these soon as I have actually painted all of the ones I own, shockingly. As usual with wargaming flags, for some reason, the standards are rather oversize making it difficult, given I gave them the correct length (scale 9' 10") poles.  I wish flag manufacturers would say that there flags are oversized. 'Oh they look better on the table' say idiots on TMP. Not to me they don't. It's like those people in the past who used 54mm figures on the table to depict their generals. Also, the standard bearer figures' hands are in just the wrong position to easily hold the flagpoles. It took me a very frustrating hour to get them attached, Immediately afterwards I had to go to the doctor and he was concerned about my 'alarmingly high 'blood pressure. I had to explain what had caused it.

My current projects include a unit of Fireforge Byzantine archers and three Byzantine command to go with the nine rank and file I finished in January. I have all the base colours down on these now so hope to push on with them this weekend, In addition, I am working on a couple of individual figures for when L get bored with production line painting. One is a pulp Turk/Egyptian and the other is a Harry Potter figure for my daughter, really just to see if I can do it justice and thereby justify buying the game which my daughter would then play with me, at least. 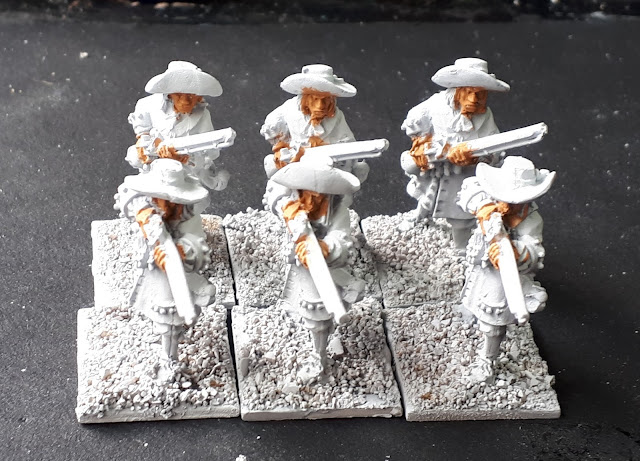 These six figures are a purchase from this week; six North Star 1672 Dutch. I ordered these at lunchtime on Tuesday and they arrived Thursday morning, which is nearly as good as Amazon.   This purchase was inspired by a new book on the Dutch army of the period which came out this week. I bought some of these Copplestone sculpted figures ten years ago when they first came out and even painted a couple but finding information on the Dutch army of the time proved impossible so I gave up on the period. Hopefullym I will now be able to produce something for use with The Pikeman's Lament.  Compared with the plastics I have been painting lately these big chunky metals are going to be easier to deal with I think.  I just need the book to arrive so I can get properly started. 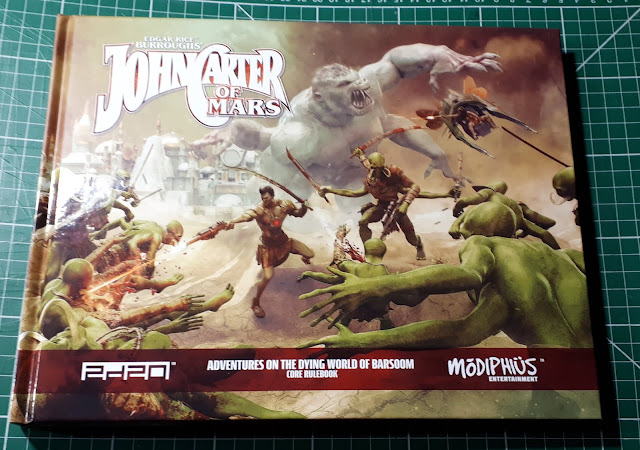 A big box of a Kickstarter I backed some time ago arrived this week: The John Carter role playing game. I couldn't even remember if I had backed this or cancelled it but here it is. Now what on earth do I do with it? Lots of delicate looking resin figures. Oh dear!  Thirty four figures and a 238 page rule book! 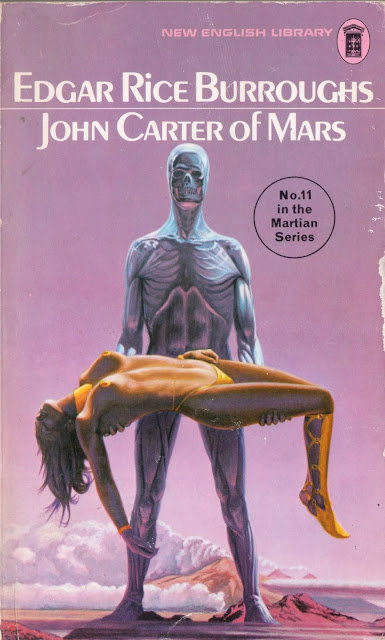 I first read the Edgar Rice Burroughs books in the early seventies when I was enticed by the covers of the New English Library paperback issues which largely featured under dressed ladies, much to the delight of my twelve year old self.  The key painting issue with these is going to be devising an appropriate flesh tone for the Red Martians.

The problem is that the more I paint the more figures I want. When I wasn't painting much I didn't buy many figures. I really, really must sell some I am never going to do! 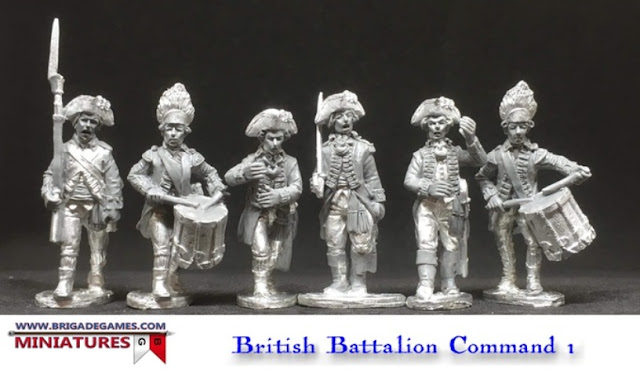 So absolutely no reason to back another Kickstarter this week, of course. But that is exactly what I did with Paul Hicks' American War of Independence figures for Brigade Games (it's funded with 26 days to go). As usual I am influenced by the sculpts not the wargaming potential but this is a period I have literally toyed with for many years, ever since my Airfix days. I bought a lot of the Perry Foundry figures but although Perry Miniatures comprehensive range is very fine the older Foundry sculpts look rather old fashioned (and small) now,   Rebels and Patriots will be the set of rules for those and I will resist the temptation to do a historical battle (always my downfall) in favour of some skirmishing.  The only issue will be, I suspect the massive customs duty and shipping charges for the 20 packs I have committed to. 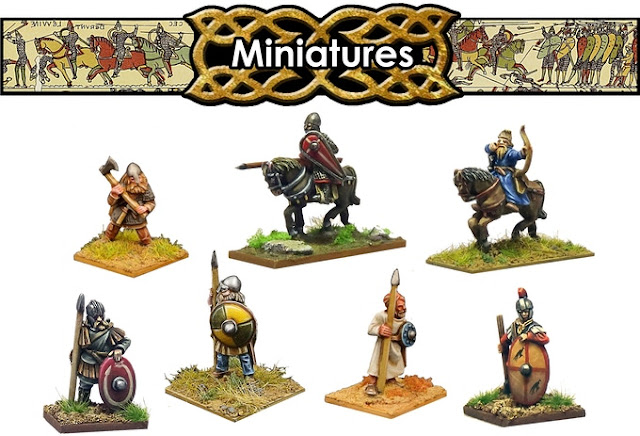 I was actually supposed to have a game Sunday week at Eric the Shed's. He is doing one of his big weekend games and this one will be Hastings; a battle I have always wanted to game. Sadly, I discovered yesterday that I have to return to Botswana next Saturday so will miss it. This will be my third visit in thirteen weeks. Never mind it will provide some money to buy more soldiers I will never paint! Also lurking about is another Kickstarter I bought into: West Wind's War & Empire Dark Ages figures. Maybe I can do 15mm Hastings instead!

Other than lots and lots of work (although it would be nice if some of our government clients actually paid their bills - not mentioning any names, effendi) not much else has been going on.  The most bizarre day was being invited back to my school to talk to some pupils about working internationally).  One thing I hated when I was young were all the 'Back to School' adverts in shops at the end of the summer. Not something I wanted to be reminded of when i was on holiday.

I really enjoyed the tour of my old school they gave me, although I hadn't really been back properly for forty years. They now have twice the number of pupils we did and the buildings are three times the size.  The first thing I saw when I walked through the main door (we weren't allowed to do  that when I was there) was a group of willowy teenage girls from the school next door (where my daughter and, indeed, the Old Bat, went).  They have a number of joint lessons with the boys from my school now. This would have actually caused a riot in my day. We weren't allowed within 22 yards of the fence between the two schools in order to prevent any fraternisation at all. There was, however, a small area behind the CCF glider hut where you could engage with conversation with the young ladies without being seen from either school building. So I was told.

The school had copies of the School magazine out from when I was art editor and we looked at the pictures I had done for several issues. Mostly of young ladies. I was notorious for being the first person to submit drawings of women to the school magazine.  The food choice at lunch was amazing (whatever happened to beef/lamb burgettes and the spaghetti bolognese that looked like worms in a cow pat) and I was surprised to learn that fifty percent of the staff were now women. We had one lady German teacher and that was it.

Although a lot of the fabric of the school I attended was still there it has been extended and changed so as to be almost unrecognisable. In particular replacing the parquet floor has changed the whole nature of the place. Walls which were external are now internal with additional atria added putting what was outside inside, like parts of Las Vegas. Occasionally there would be an unchanged part, like the school hall and it would take me right back. I told them that my Uncle went to the school and they found his entry details from 1932. They emailed this to me, I sent it to his sister and she sent it to his children and as a result I have reconnected with my cousins who I haven't seen since 1975.

"What one piece of key advice do you have for the boys?" I was asked. "Don't have anything to do with the girls from the school next door!" I replied.  It wasn't just the Old Bat. There had been other stressful interactions with these girls. As my friend Dibbles told me at the time: "you are better off with the girls from Surbiton High, they are prettier, sluttier and less stressful." I wore my old school tie and they wanted it for their museum display case. I felt like a museum piece myself after I left. 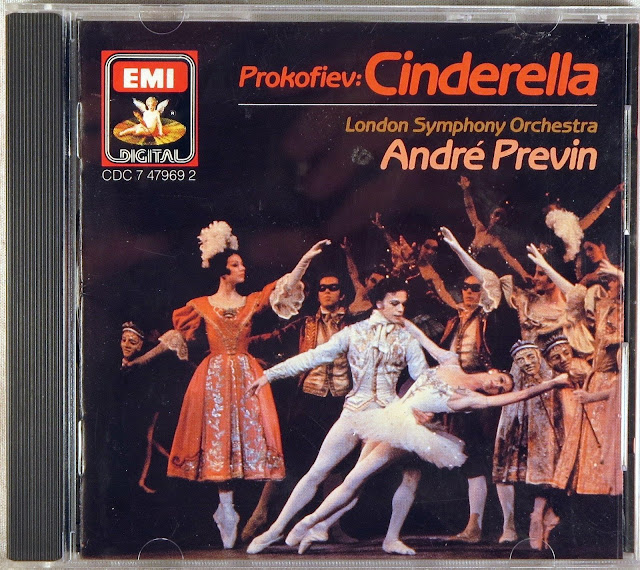 In memory of Andre Previn, one of my favourite conductors, I am listening to his recording of Prokofiev's atmospheric Cinderella. It's not as well known, or as melodic, as Romeo and Juliet and takes a bit of time to get into but the more  I listen to it the more I like it. 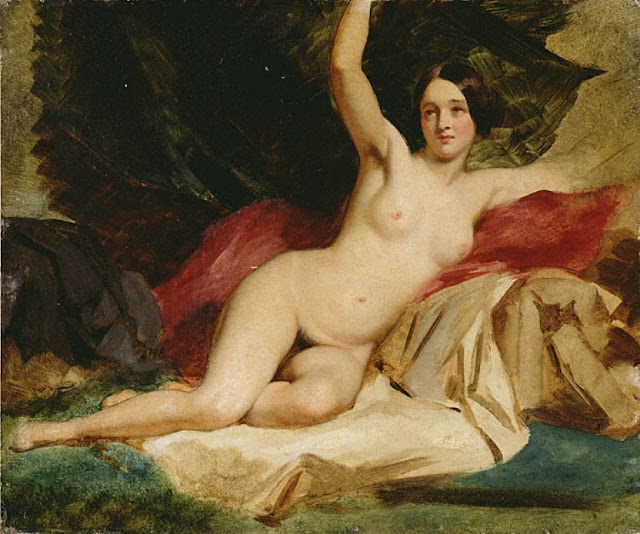 William Etty Female nude in a landscape circa 1825

Today's wallpaper is by the English painter William Etty (1787-1849).. He was the first major painter of the nude in England but scandalised parts of the artistic establishment by continuing to paint from life well after his student days and scandalised parts of the rest of society by including ladies' pubic hair in some of his paintings. Out of fashion for a hundred and fifty years after his death, he has recently come back into favour again, particularly after a large retrospective of his work in his home town of York in 2011
Posted by legatus hedlius at 12:47 pm 6 comments: