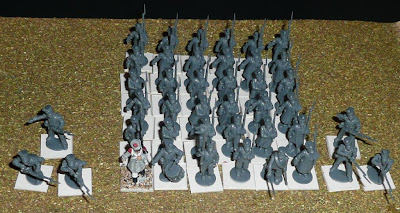 The contents of the box, based.
I sat down and put these together over the weekend. It took about an hour and a forty-five minutes to get them into this state.
My first impressions are very, very favourable. Apart from the six skirmishers and the command figures, where you have to stick on their arms, the figures are complete, except for their packs. The separate arms don't fit perfectly and will need a tiny bit of filler. I have started to paint one figure and experience has shown that it is much easier to stick on the pack after you have painted the figure (avoids poking a brush into small spaces to paint belts). I also, stupidly, stuck on a backpack with greatcoat to a figure wearing a greatcoat (there are two sorts of pack: with and without greatcoats) so I had to prize it off and start again. There are many spare heads but I just used the (attached) shakos (all the figures come with shakos the other headgear is only on the spare heads) for the first set (oh dear I am already contemplating another box). Swapping heads may be quite tricky as the rifle is so close to the head so I will need to be careful.
There are a few mould lines (no flash) which can be scraped off in seconds with a sharp modelling knife. In fact I would say that preparation is quicker and easier than metal figures. I only cut my fingers twice (the plastic is hard). There really is little or no loss of definition compared with the metal figures and the size is spot on next to the metals (why couldn't Warlord Games manage this with their Romans?). I have nearly finished painting one of each metal and plastic figures so I will post them soon.
I reckon that at 1/33 ratio the box pretty much represents a two battalion regiment for Quatre Bras or Waterloo. I think I will start with the 3rd line who were one of the first units engaged at Quatre Bras. I reckon I need a mounted Colonel and another officer and drummer for the second battalion. Only the first battalion carried an Eagle, of course. The figures have round pom poms on their shakos so represent the first battalion of a regiment. The metal figures all have the flat discs of the subsequent battalions (I found that I have a number of these already). The Perrys reckon you can squeeze the pom poms to make the flat discs. I think I might try and cut them instead (more cut fingers). Something for the second box and, anyway, if you mess it up you can just bung on a new head! I also remember reading somewhere that the first battalion was likely to have had a better uniform issue than the others who were more likely to have just had greatcoats issued so I will make sure my first battalion looks a bit smarter. The chaps in any third battalion are going to look very tatty!
I think I will keep them as one unit as I don't think units of 15 or 16 will be that viable using the Charles Grant Rules.
I am so enthused about these figures that I resumed work on the two Dutch jaegers I need to finish my first company of the 28th (the first allied unit really engaged on the day of Quatre Bras). I'm also now thinking about finishing my first cuirassier!
Could a Napoleonic Blog be that far off?
Posted by legatus hedlius at 7:12 am