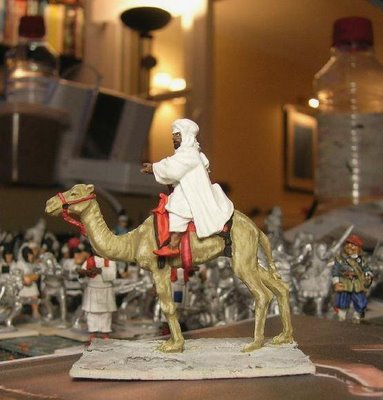 There was a note on TMP today saying how pleased someone was to have got some painting done. I haven't got much done lately as I don't have any single project which is helping me focus. Some more Perry Beja arrived yesterday so I may concentrate on them. This post made me sit down for an hour or so and work on the Mahdi. So thanks mmitchell!
Very pleased with the camel. Its based on a picture I took of one I saw a policeman riding by the pyramids earlier in the year. Not quite finished yet and I need to finish his "supporters". The workbench is as chaotic as ever and a Renegade ECW pikeman waits forlornly for his pike..
More Camel cavalry next!
Posted by legatus hedlius at 8:36 pm No comments:

Well, I still don't have any.
I took a bunch of figures on holiday to work on in the morning before the family got up. I fully intended to paint my A&A 3rd Century Roman Archers but for some reason started on the Perry Beja. Amazingly, I finished 18 and now have a unit and a half of spearmen for TSATF. I've just ordered some more to finish off the second unit and the musket unit. I'm working on the Mahdi pack now and am very pleased with the way the camel is going as I haven't painted one before! Now I need to finish the group of 8 British Infantry I am working on.
Not been inspired to go back to the Vikings/Early Saxons but have made some progress on the Carolingians. I also started to paint a unit of Gripping Beast Republican Romans for the WAB Hannibal supplement but now I'm wondering about going with Renegade again. I've ordered some A&A Carthaginians and some Crusader Romans to see how they look.
Got a possible ECW game coming up in September so I have got the remaining figures form my two foot regiments out to finish (about 10 figures). I have also got my Bicorne dragoons out and will try and get half a dozen done. I realise that I have loads of unpainted ECW but they do take gaes to paint.
Posted by legatus hedlius at 12:13 pm No comments: