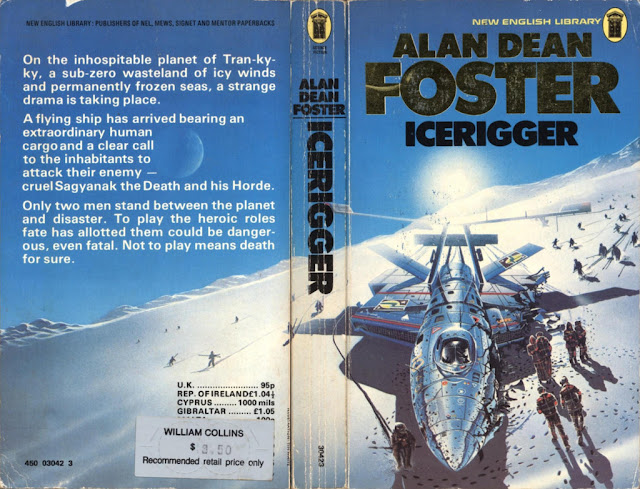 I've just got back from Botswana after an eighteen and half hour journey, more on which later in the week.  Too tired to do anything today but while surfing the internet this afternoon my eye was caught by a click bait article on the Star Wars sequel novel Splinter of the Minds Eye by Alan Dan Foster. This was written as the story of a possible low budget Star Wars sequel before George Lucas realised he had a major hit on his hands.  Foster, because he did a lot of film novelisations, was regarded as a hack writer by the 'proper' science fiction community but I enjoyed several of his books when I was. admittedly, a teenager. 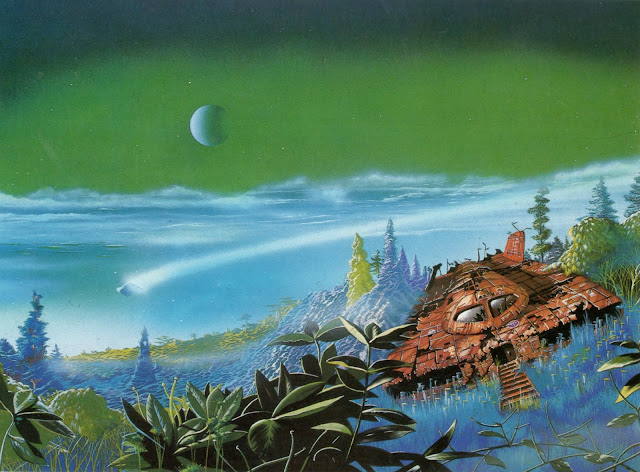 I used to read almost exclusively science fiction from about the age of eight, much of it more advanced reading age wise than my age at the time and there is no doubt it helped me in my English lessons at school, despite the derision it was held in by teachers (especially by the time I reached senior school and the books' reading age started to dip below where I was supposed to be).  I grew out of science fiction by the time I was about seventeen, when I discovered how to explore a much more exotic fantasy world; girls. 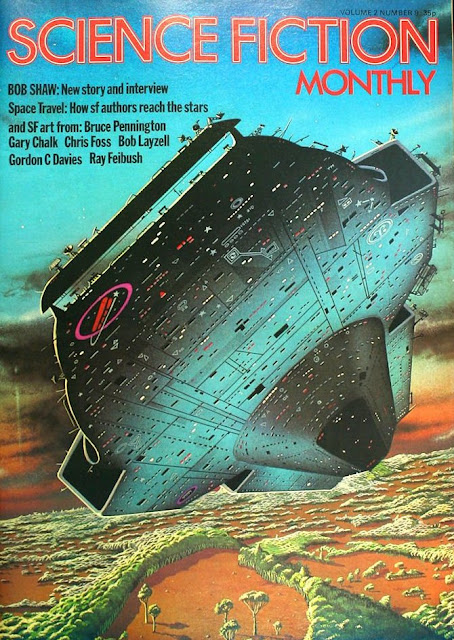 Yes, it's that Gary Chalk, of wargames scenery and Battlecars fame, mentioned as a contributing artist!

Anyway, then as now, I have always had  a primarily visual, rather than a literary, sensibility (much to my sister's despair) and the mid seventies saw a burgeoning of UK science fiction book cover artists. At about the same time, New English Library launched Science Fiction Monthly (1974-1976) a broadsheet loose leaf magazine which featured novel cover art in big poster sized reproductions.  It was through this that I became familiar with many of the artists of the time like Chris Foss, Bruce Pennington and Tim White.  Although Foss (who, amusingly, did the illustrations for The Joy of Sex) was the master of the massive floating bricks style of spaceships I found White's work much more atmospheric.  He really did create whole worlds in his paintings. 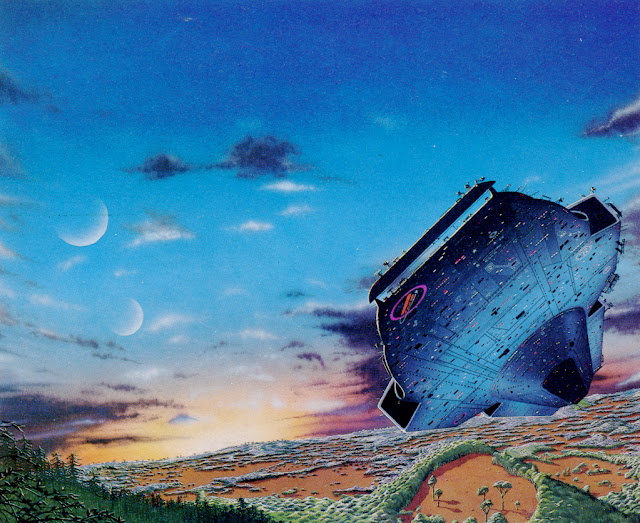 White was born in 1952 and he studied at Medway College of Art. In 1972 he started working at a number of advertising studios while doing fantasy and SF illustrations in his spare time.  In 1974 he got his first book cover illustration commission, for an Arthur C Clarke novel and became a freelance illustrator shortly afterwards.  His pictures from this period were very accomplished, given he was still only in his early twenties. 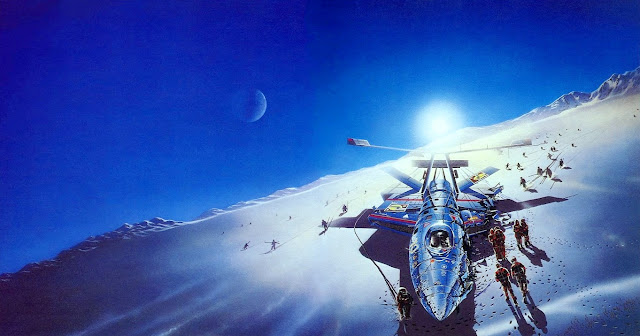 Back to Alan Dean Foster and it was his cover for that author's Icerigger which really was the definitive science fiction cover for me at the time.  It really stood out on WH Smith's bookshelves and it was probably the first book I bought on the basis of the cover alone.  Unlike Foss, although he was, of course, an able illustrator of the human form (especially beardy men and hirsute women) whose SF pictures rarely included human figures, White often depicted people in his paintings which gave them a human scale. 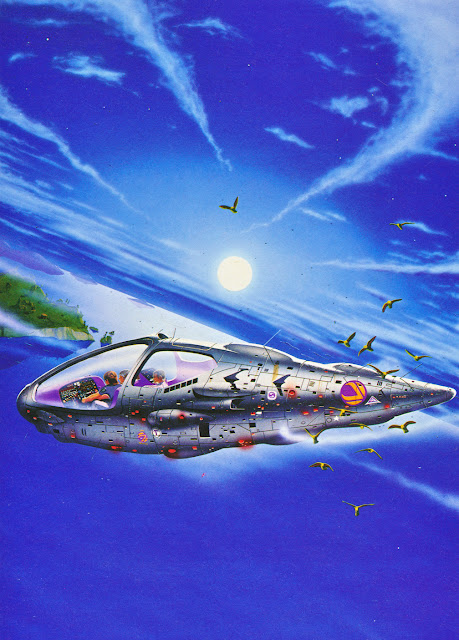 All of these pictures appeared in Science Fiction Monthly and I think I had most of them up on my wall at some point. They really are some of my favourite SF illustrations of spaceships ever. 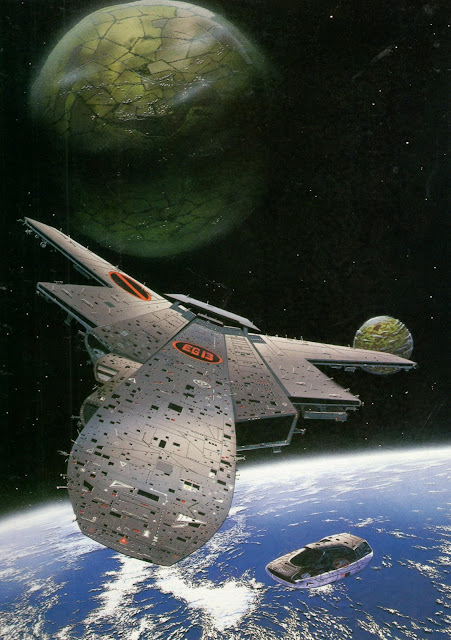 I've always toyed with the idea of some sort of science fiction wargaming, especially as I read lots of SF and hardly any fantasy fiction but while I have played Warhammer and Lord of the Rings I have never played a SF game, although I have bought some Warhammer 40000 figures in the past but just didn't like the figures very much.  It was the Spacemarines flared trousers that put me off, primarily.  Still, maybe one day!

A much delayed post on some Tour de France linked food and wine on my food and drink blog here.  I am travelling with a teetotaller and now haven't had any wine for a week!   Feeling twitchy.
The hotel is full of fashion models, for a big show in town but they only seem to drink water and not eat at all.
Posted by legatus hedlius at 4:04 pm 6 comments:

Off to Africa for a couple of weeks... 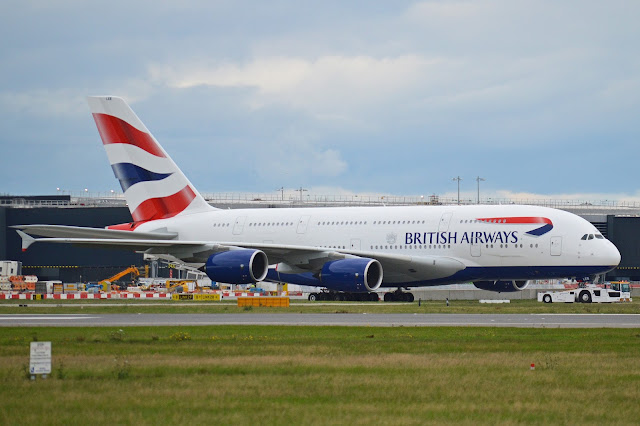 No posts from me for a bit as I am off to Botswana for two and a half weeks. Never been there before (or South Africa, where I have a meeting on the way out) but I gather, as Africa goes, it isn't too bad.  Still, an eleven hour flight on one of those double decker Airbuses then another hour back to Botswana after a change at Johannesburg.

I'll probably want to paint Darkest AFrica figures when I get back!
Posted by legatus hedlius at 1:43 pm 6 comments: 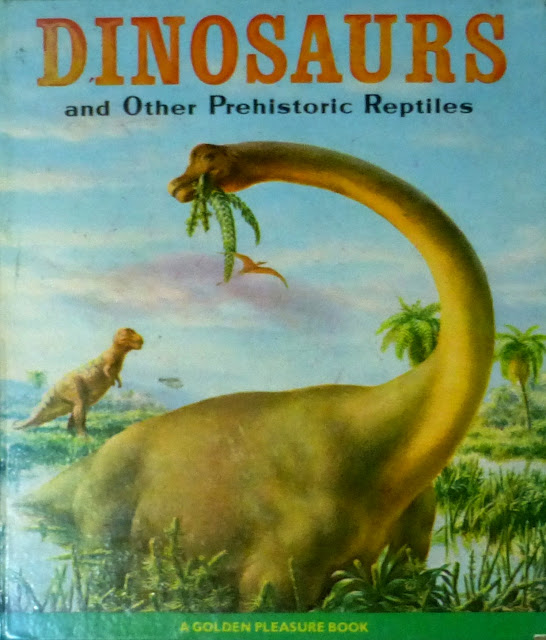 I got on with my cavegirls a bit today and you can read about them, my favourite dinosaur book and an interesting experience with a schoolfriend as a result of looking at it.  All on my cavegirl wargaming  blog.

I have also shaded the skin and jackets of my Mexicans and done the shading on the trousers of half of those I have under way too.  More arrived this week though so they will need basing, except I have a more than two week overseas trip starting on Saturday.  Just when I was getting back into painting too!
Posted by legatus hedlius at 11:12 pm No comments: