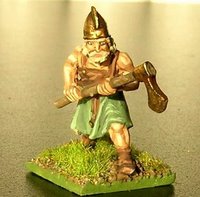 The light mornings have been good for my painting and I have finished around 8 figures this week. Here is my first Foundry Bronze Age warrior. I am quite happy with the bronze colour which is a mix of GW Burnished Gold and Brazen Brass.

I am going to have to think of a way of differentiating two forces-maybe going for greens and browns in one and blues and greys in the other..
Posted by legatus hedlius at 11:28 am No comments:

Finished some more Artizan/Foundry Vikings over the weekend but am also painting some GB early Saxons for the new WAB Arthurian supplement.
The GB Vikings were the first 28mm metal figures I bought; at Salute about five years ago. I have decided that I prefer the Mike Owen ones but looking at my GB Vikings nearly all (those without helmets anyway) could be transformed into Late Saxons or Early Saxons. This will then give me a big start on my Arthurian Saxon army. So I am going to go through them and sort them to see where I can allocate them. Then hopefully it should just be a case of repainting the shields and improving the basing to bring them in line with my newer figures.
Posted by legatus hedlius at 11:51 am No comments: 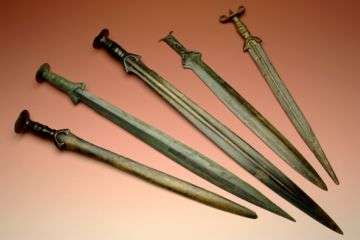 I saw some fine bronze age helmets and swords in the Natural History Museum in Vienna this week. I decided to have a go at finishing some of my Foundry Northern European Bronze Age figures which I started some time ago (at least based and undercoated them). I started to think what shade of Bronze they should be and so put a not on The Miniatures Page. I'll see what they come up with...
Posted by legatus hedlius at 9:42 pm No comments: 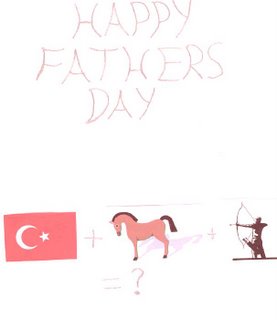 My daughter gave me this card for Father's Day today. I know I have spent a lot of time over the past few months painting Turkish Horse Archers. I know that whenever she asked me to: adjust the saddle on her bike, look something up on the internet, help her with her homework etc. I would answer "but I just have to finish this Turkish Horse Archer, first". But I hadn't realised until I got this card how obsessed I had become to the extent that she now identifies Daddy completely with THA!
Posted by legatus hedlius at 9:19 pm No comments: 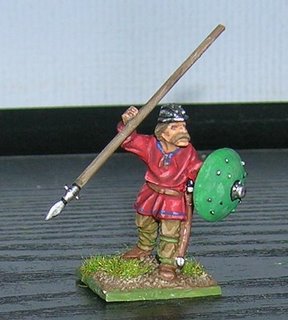 I have decided to have a good go at some of my Dark Age armies and am painting a group of Artizan Carolingians, Gripping Beast Early Saxons (ready for the WAB supplement) and some Artizan/Foundry Vikings.

Starting 40 figures all at once is a bit depressing but at least I finished one this weekend. No one seems to make Carolingian winged spears so I drilled out a Gripping Beast one and added a crosspiece.
Posted by legatus hedlius at 7:32 pm No comments:

Having finished the Turcomen I have to decide what to paint next. Time for another review of the workbench:
I still have 5 Perry pilgrims I didn't finish to contribute to someone else's army at the refight of Dorylaeum. I did 7 but ran out of time. I think these will definitely go on the back burner.
Next I have 10 or so Perry 1815 French based up. I have nearly finished one figure and would like to finish a couple of companies. I am reckoning on 6 to a company, based on Charles Grant's rules Napoleonic Wargaming. I think the new Battle Games magazine is bringing out "Old School" tendencies! I also have 1 Perry Dutch Jager nearly finished too. Ideally I'd like to get a few units done to refight some portions of Quatre Bras.
Next back are some A&A 3rd Century Roman archers. I've already finished a unit of infantry and a general and these look pretty fast to paint .
Then I have some Dark Ages figures: some Artizan Vikings and Carolingians. Some of these are well on the way so could join the half finished unit of Vikings on my shelf.
For my Byzantine army I have made some progress on the first unit of infantry. I also picked up some Crusader archers off eBay but they are very small next to the Gripping Beast ones. Don't think I will buy any more. I also have some GB Varangians undercoated. See my Byzantine Army Blog: http://byzantinewab.blogspot.com/
I am also painting a unit of Warhammer Dwarves, having been tempted into buying the army deal before Christmas. Two figures done so far. Very easy to paint.
Further back I have more Perry Sudan to do. Again these are quick to paint and I will get on with them as I bought some more at Salute in April.
There are also some GW Lord of the Rings figures underway, some Dwarf command and some Rangers of the North.
Lastly, there are some odds and ends I have begun to see how they go: like some Conquest French Indian Wars figures and some Artizan British Airborne.
Decisions Decisions!
Posted by legatus hedlius at 10:05 pm No comments:

Just finished basing the Turcomen (and women) horse archers I undertook to do for a club refight of Dorylaeum at the Society of Ancients meeting at Milton Keynes next week. Annoyingly I won't now actually be able to participate as I will be coming back from another business trip. Grr!

I had been thinking about doing a Crusades army ever since the Perry figures came out and having read the Tom Harper novel "Knights of the Cross" set around the siege of Antioch I became even more keen. However, I always thought I would do a Crusader army not a Turkish one. But lots of people at the club had Normans so it was Turcomans. I now find it gives me the basis for a reasonable WAB army so will get some Ghulams, command and some infantry. It means I have done the boring bit first anyway!

I've always hated painting cavalry as I found painting the rider seperately a fiddle and I found all the paint kept rubbing off as there was no base to hold on to. Some of the Perry figures have riders moulded onto the horses and these were quick to paint so, eureka, I stuck all the figures on horses before undercoating. Don't know why I didn't before. No more seperate painting from now on. Cavalry now hold no fear (the 30 Turcomen were the largest batch of cavalry for one army I have ever completed) and I am actually looking forward to doing some Carolingian knights.
Posted by legatus hedlius at 9:50 pm No comments: