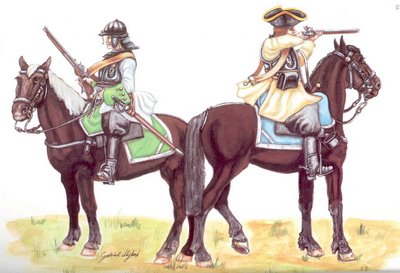 I don't know anything at all about the War of the Spanish Succession, shamefully. Even though, years ago I bought some of the first ever (perhaps the first ever) 15mm figures from Peter Laing who chose this period for his pioneering release (it's all so Old School!).
I asked Dave a question on the Guildford Forum about the new Front Rank figures, trawled The Miniatures Page a bit and came up with this illustration from Wargames Illustrated number 23 (July 1989 - I bought four old bound volumes in the model soldier shop in Bath last year).
I think I have settled on the green faced regiment here: Wolframsdorf.
Now all I need to do is order the figures! Only have to paint 12!
Posted by legatus hedlius at 7:54 am No comments:

Not another new period.. 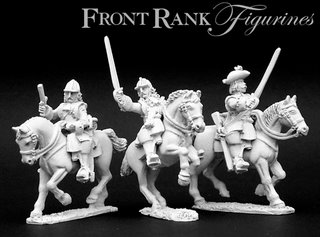 I was just starting to focus a little bit (on Dark Ages) and then those bad people at wargames club (especially Mike, John and Dave) tempt me with Marlburian again. This relates directly to their decision to do a refight of Ramillies in October. I have already resisted once, having been on the point of buying some infantry.
Unfortunately, this immediately followed on me looking at the Front Rank Figurines site (where I was looking for medieval lances for my Wars of the Roses men at arms) and seeing their new WSS cuirassiers.
Fate?
Posted by legatus hedlius at 7:44 am No comments: 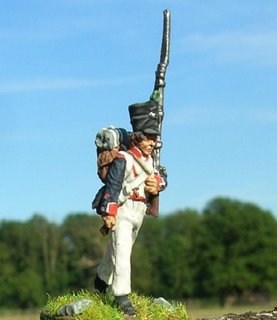 Actually, it's the first metal Napoleonic figure I have finished since 1971 (a Hinchliffe Imperial Guard Grenadier). I did paint quite a few plastic 20mm Napoleonics about 11 years ago but never really was happy with them. I haven't liked the proportions of any of the metal manufacturers untill the Perries started their ranges a few years ago. These are fantastic, though. Whether I will ever get enough done for a force is debatable. I am going to start a fusilier in a greatcoat and a voltigeur to see how they go.
Posted by legatus hedlius at 6:52 pm No comments: 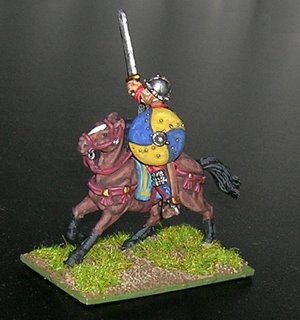 Can't believe its July already. Very hard to paint much at the moment as its over 30 degrees and the paint dries as soon as I mix it!
Finished a few figures over the weekend including a couple more Artizan Carolingian foot and my first mounted figure who will be my army general. Very satisfying to do 190 points in one go! I also based 8 more milites while watching the Tour de France prologue.
Started on my great Dark Ages sort-out and almost have a unit of Gripping Beast Vikings done. Three more figures need re-basing, that's all. I am trying to resist the temptation to repaint them but am tidying up some of their faces a bit. They were all done before I realised I needed glasses!
Posted by legatus hedlius at 9:17 pm No comments: