On the work bench.. 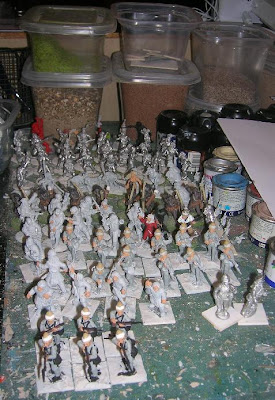 Well, I am not doing so well at holding my concentration on one or two periods as I was earlier. The work bench still contains some Beja and my next unit of British, the King's Royal Rifle Corp, for the Sudan. But I still have some Azande waiting to be undercoated, some Belgian Force Publique troops and some Darkest Africa characters. There are also the Artizan Pulp figures and I have just started some Musketeer Miniatures Early Saxons. I really mustn't add any more!
I am not getting much painted as I was in Canada last week and have to fly to Poland on Thursday. Next week I am in Mexico, then Abu Dhabi, Sweden and the US so the September total is going to be as poor as August! I'm not getting much time at the weekends either as I am travelling back and forth to Cowes for various boating activities.
Oddly, when I do have time to paint I am not that enthusiatic and I think the main reason is the loss of good light as the days get shorter. I did a little bit on the KRRC tonight but spent more time fiddling with my Sudan Blog. I put a counter on it about a week ago and it's already had 200 hits!
Posted by legatus hedlius at 10:14 pm No comments: 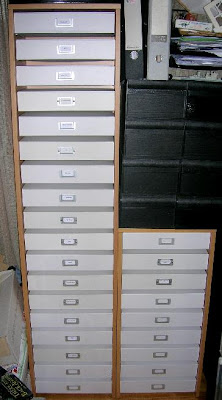 Someone on The Miniatures Page was asking how people store their figures, as they need a system that looks attractive as well as being practical.
Most people at Guildford use A4 Box Files. Recently John Lewis, the department store, have been selling these rather nice storage units. You can buy special white box files to slide in and out but, of course, any box file will do. They also have a little holder where you can put a label, which is very useful. The tall units hold 18 box files and the small ones 9.
Posted by legatus hedlius at 7:55 am No comments:

I base most of my figures on 20mm square artists mounting card. The only exceptions are figures which are for rules which do not require ranked up formal units and for these I have used 20mm M10 washers. The M10 refers to the size of the hole in the centre.


I had used up my stock of the ones I had (left) and when I went to get some more from the DIY shops I found that they had trimmed the external diameter (centre). This was annoying as the new washers were noticeably smaller than the old ones. I have been searching for over a year to find the old size with no luck. For my new Artizan Pulp figures I had taken to prizing washers off some unpainted Future Wars figures I had not got around to.

Fortunately, in Cowes they have an old fashioned ironmonger called Hursts and I managed to get a couple of hundred of of the right external diameter washers and, even better, they are M8s so the internal diameter is smaller. This is much better for those figures which have very small bases like John Hanning Speke, here. 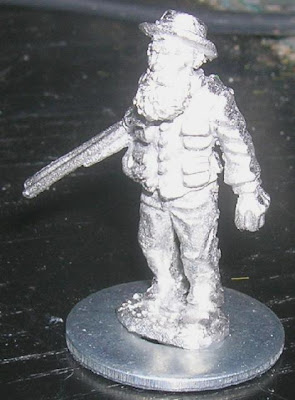 In the past I would have had to cut a piece of card to bridge the gap making the figure taller than it should be.

So hooray for Hursts! I am going back to Cowes next weekend for the Powerboat Grand Prix so might pick up some more.

It's very sad when the highlight of a sailing holiday is buying washers..!
Posted by legatus hedlius at 7:00 pm 1 comment:

Home from the sea.. 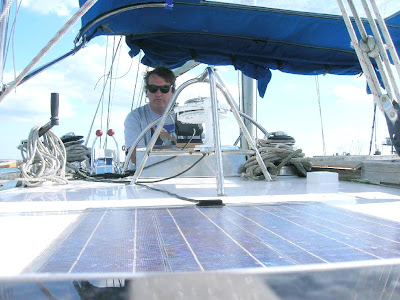 ..or, at least, Cowes Week, plus some other bits of racing on various boats.

I took my usual number of figures to paint but there just didn't seem to be the time this year. Only did about 10 in three weeks! I'm off to Canada tomorrow so it looks like August is not going to be too brilliant. All the figures I did were for the Sudan so I will put them on my Sudan Blog (see link on the right) soon.
Posted by legatus hedlius at 6:43 pm 1 comment: