A third of a unit of Hastati! 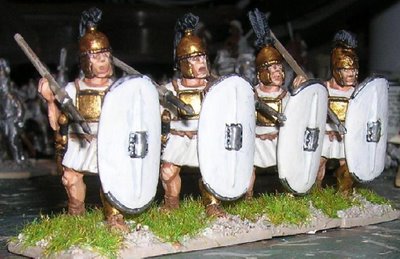 I haven't been able to do much painting lately as it has been too dark in the mornings and the evenings. I also had a business trip to Portugal and Spain which meant I lost a weekend.
I am still trying to concentrate on just a few forces on the work bench and have managed to finish three more Crusader Hastati. I have ordered some more Crusader Punics; some Velites and a command unit. The light infantry command unit doesn't have a standard bearer though so I will have to get a regular one as well.
Using the WAB Hannibal supplement means that each Roman unit is only 12 figures, so I now have a third of a unit. I have decided that I really like painting the Crusader figures. The only thing I have done is substitute the rather chunky pilum for some Gripping Beast ones.
Posted by legatus hedlius at 6:23 pm No comments: 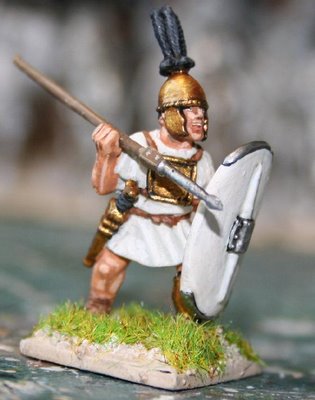 I have painted my first Crusader Punic period Roman and am very pleased with it. Once painted and with the shield attached it doesn't look as stocky as on the website. The new marching camp and general figures arrived on Saturday and they are lovely.
The figure was a pleasure to paint in exactly the same way that the Gripping Beast ones weren't. The problem I have now is that I have a unit of GB hastati two thirds complete and the same with a unit of Renegade velites. I may finish them and put them on eBay, I suppose.
Posted by legatus hedlius at 6:59 pm No comments: 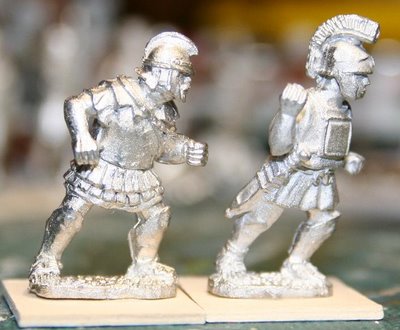 Left: A&A Carthaginian Right: Crusader Roman
I have been trying to find some figures for a Punic Wars Roman army for some time and have ordered samples from different manufacturers without being really happy with any of them. I liked the Renegade Romans but not their Numidians. The Gripping Beast ones had the range but were really too slim to go with my existing Celt Army which is a mixture of Renegade and A&A. I saw on TMP that Crusader Miniatures have just announced they have completed their Republican Roman Range with an excellent General and marching camp. I hadn't really looked at them but these new sets were excellent. I have now compared one of their Roman figures against an A&A Carthaginian I already had and they are completely compatible. I think I read somewhere that the A&A figures are Mark Sims too.
Case solved! Gripping Beast, Companion and Renegade off you march to eBay!
Posted by legatus hedlius at 8:53 pm No comments: 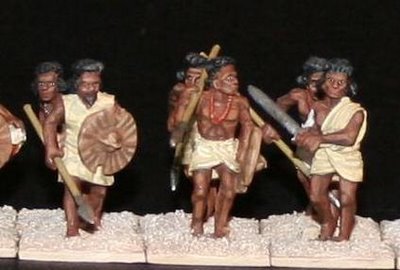 I looked at my Darkest Africa figures and decided that I would, on refelction, concentrate on some more Fuzzy Wuzzies as I had already based and undercoated them.

I felt that I was well on the way to a viable The Sword and the Flame Force so shouldn't wander off into other parts of Africa for the time being.

Progress on these will be recorded on my Sudan blog.
http://sudan1883.blogspot.com/

I put nearly all the other figures I had out on the workbench (nearly 200 of them) away and just left the Fuzzies, some Sudan British, a unit of A&A 3rd century Roman Archers and some Perry Napoleonics out. The rationale being that the British are part of the same exercise as the Beja, the Romans are well on the way and could be completed quickly and the Napoleonics are just there if I feel like a change for an hour or so. We'll see how it works! So far I've managed to paint the skin on the Fuzszies but the dark mornings and evenings are really reducing my painting time.
Posted by legatus hedlius at 10:27 am No comments:

I'm not getting so much painted lately due to the shorter days. I also have a lot of overseas trips coming up. My workbench is even more out of control than usual at the moment: Carolingians, Arthurian, Saxons, Vikings, Byzantines, Spartans, Mahdists, British Sudan, French and Dutch Napoleonic, Cavemen and loads more I can't even remember. I don't have any club projects coming up that require me to paint figures (I finished the Earl of Somerset and a standard bearer last night for today's Tewkesbury refight) so I think I need a sort out again. I am trying to get my study tidy and all the little pots of basing materials are all over the place. If I put away all my half painted figures and just concentrate on one sort for two weeks we will see what we can achieve. I need to choose something that will keep me engaged and, preferably something which doesn't involve non-uniformed troops like the Dark Ages ones.
I was inspired by Matakishi's single minded approach to projects having met him last week and maybe I need to take a tea leaf out of his book and really work on something without distraction.
http://www.matakishi.com/
There are two possibilities. Either I carry on with my Sudan forces as I have enough figures to complete two more units for The Sword and the Flame, or I start a completely new project but using figures I already have. I have two Darkest Africa forces to start: Somalis and Ngoni. These are Copplestone figures so should be easy to paint. The Somalis would be quicker as all of their clothes are white. Ive' even based a few and undercoated some. The Ngoni would be able to join an army I have already painted of Ruga Ruga to make a Mirambo type warlord army. Before I decide maybe I'll look at the figures again.
Everything else needs to go back in their boxes!
Posted by legatus hedlius at 11:27 am 1 comment:

What sort of painter am I? 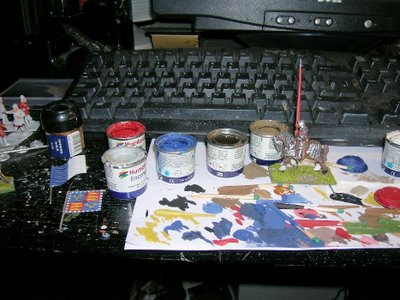 The sort who splatters paint all over his desk and computer..
Posted by legatus hedlius at 9:24 pm No comments: