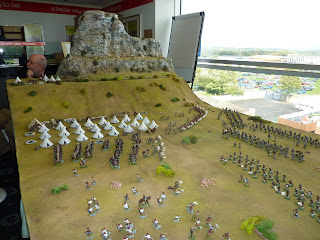 Isandlwana at Colours
I had quite a quick trip to Colours today as I had to get Guy to and from rowing this morning.  His coach is one of the British Olympic coaches and said that he has the potential to go a long way in the sport.  Unfortunately, this means he now has to move up to a group that starts at 8.30 rather than 10.30 on Saturday mornings.  Grrr!
Two of the traders I wanted to get things from, Gripping Beast and Grand Manner, weren't there but I picked up a few things on my list.  Some more Mutineer Miniatures, including the Naval Brigade gun crew who are actually destined for my Darkest Africa Zambezi campaign, plus the new generals packs for both sides which aren't on the new website yet.  I also bought a couple of packs to see if I can do some head swaps on them which may be possible with a bit of work.
I picked up a few odd packs of things I fancy painting at present: some more Artizan Carolingians and Andalusians (I'm seriously thinking about El Cid again), a pack of Crusader Norman crossbowmen (which will be fast-tracked) and the Perry plastic Mahdists.  I also got the new Black Powder supplement to see how they handle the Great Northern War.
I also bought a nice Baueda 15mm Viking tent, for my new Copplestone fantasy figures, from Mike Lewis at his Black Hat Miniatures stand.  He asked when I would next be at the club: good question!  I have a sort of outstanding invitation to do a World War 1 game but haven't been for ages.

Otherwise, I was disappointed at the lack of 15mm fantasy scenery.  I am looking for some Conan the Barbarian type not quite Celtic or Dark Ages stuff; like the old Celtos 28mm scenics which had mammoth bones and such like in them.  I quite fancy a walled village with a tavern in it for some reason.  Hyboria has a weird mix of co-existing periods so a medieval Bree type village alongside Celtic round houses isn't out of the question.  I enjoyed the scenes in the first Simon Scarrow Romans book where a Roman vexilia attacks a German village and this would be perfect for the Copplestone figures. Maybe a more 13th century Scandinavian look might be better.   I was talking to someone who suggested the Mirliton 15mm figures to supply some other armies.  They do Burgundians (Aquilonians) and Crusades period Muslims (Turanians).  Maybe I just need to paint the ones I've got before I get too carried away!

Best thing about the show was the amazing Isandlwana diorama (I hesitate to call it a wargame as it wasn't actually being played).  I will put some more pictures on my Zulu Wars website in a few days.

Tomorrow I have to buy some more football boots for Guy (I wish he'd stop growing) and take Charlotte to and from her play rehearsals so I suspect I won't get much painting done!

Posted by legatus hedlius at 2:07 am No comments:

Well you can't fault Mr Copplestone on his service.  My new 18mm fantasy figures arrived just two and a half days after I ordered them.
The first thing I noticed was that they are really, really tiny.﻿  I was sort of expecting them to be small Airfix size but they are, as my daughter said, "reallly widgey!"  This makes the level of detail, particularly on the faces, even more amazing.  If more 15mm figures were like this I might buy them!  Best thing about them is the anatomy: in proportion heads -amazing!
The Northlander warriors are basically his Foundry Ancient Germans and nothing wrong with that. The male barbarians are all basically Conan and the female ones actually have pretty faces!
I have based them on 12mm card squares (two thirds of the height of the figures) as I am going to use the Song of Blades and Heroes rules which I just downloaded.  Apparently you can play a game with 4 -20 figures: ideal. This is because I want to do small skirmishes (I always thought that people who do skirmish wargaming in 15mm are a bit silly!) rather than Hordes of the Things type big battles.  Anyway, I have played the firearms equivalent of the rules, Flying Lead, and liked them a lot.
The suggested battle area is a two foot by two foot square so I can use my Citadel battle boards.  It's Colours this weekend so I am thinking about looking for some Conan type scenic features. I'm now having to go on Saturday, which I have never done before, as my daughter has a school play rehearsal on Sunday.
Painting them is going to  be a major challenge (which is really why I bought them) and I will probably need a new brush before I do any detailed work.  I will start with this group of a half dozen and see how it goes!
It's madness really!
Posted by legatus hedlius at 2:41 pm 1 comment: 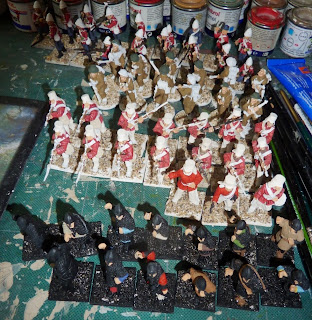 Work in progress today
I notice that this blog has just reached 50 followers (thank you to you all) so felt that I ought to post something as I have been very poor at updating of late.
I have been doing rather better on the painting and recently finished a Darkest Africa lady,  a gladiatrix and a Carolingian knight.  More progress isn't immediately apparent because I am working on four big (for me anyway) groups of figures at the same time.  Firstly, I have a group of 12 BEF Miniatures (they have just been bought by Warlord Games which bodes well, I think) 1940 British.  These will eventually be for skirmishes in Norway and France (I'm currently reading the excellent book Dunkirk: Retreat to Victory by Julian Thompson which is full of scenario ideas).  They are just started: skin shaded but only basic colour on uniform and helmets.
My second, group is 16 Muitineer Miniatures Indian Mutiny British.  I just repainted the officers coats in scarlet so they look smarter than their troops.  These are slighly further along: skin and jackets shaded, rifle, trousers and haversack basic colour done.
Thirdly, a group of 11 Norman infantry. Basic skin colour done but some shaded sleeves and trousers.
My final big group is 17 Zulu Wars 24th Foot.  These are well on the way with just rifle shading, haversack shading, helmet staining and bases to do.
I've got some more odd figures lurking around, mainly some Spartans and a few Darkest Africa characters.  Oh, and for some reason I started my Lord of the Rings attack troll which I bought, assembled and undercoated in Cowes last summer.  Its been sitting like that on my desk ever since and every time I turn my speakers on or off I knock it over so I decided to get it done. It's quite nice working on such a big figure for a change. 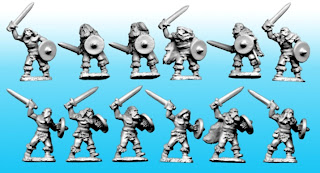 Given all this why on earth have I just ordered three packs of Mark Copplestone's 15mm fantasy range then (well, alright, 18mm)?  The truth is I will buy almost anything Mr Copplestone produces as they are so nice to paint.  I have only ever toyed with 15mm: some Peter Pig Romans and Germans and some of their WW1 figures.  Recently I bought a few Black Hat Miniatures French Marlburian figures but although I started them I never finished them.  My real issue with 15mm has always been their lousy anatomy rather than their size.  Copplestone's new barbarians look great, however. Will I paint them?  Maybe.  When I was much younger I read all the Conan the Barbarian novels so it is a fantasy world that resonates somewhat.  Their opponents are going to be fantasy Romans which is not so Conan-like unless they are the ancient Acherons or, possibly, the Zamorans,  Maybe if the line is a success we will see some more races.  One thing is for sure, I will need some new brushes; my last two, as sometimes happens with the Winsor and Newton Series 7 sables, were not entirely satisfactory. 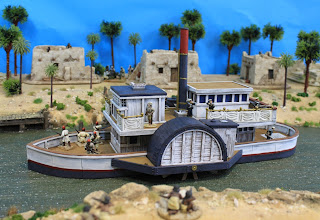 I want one of these!

I will go to Colours at Newbury racecourse this Sunday mainly because I am after some Gripping Beast plastic Saxons to pitch against my Normans.  I'm not sure if Grand Manner will be there (they usually are but will be at Warfare if not) but they have some awesome new Sudan paddle boats which look a must buy!
Posted by legatus hedlius at 12:43 pm 4 comments: