More thoughts on the Indian Mutiny 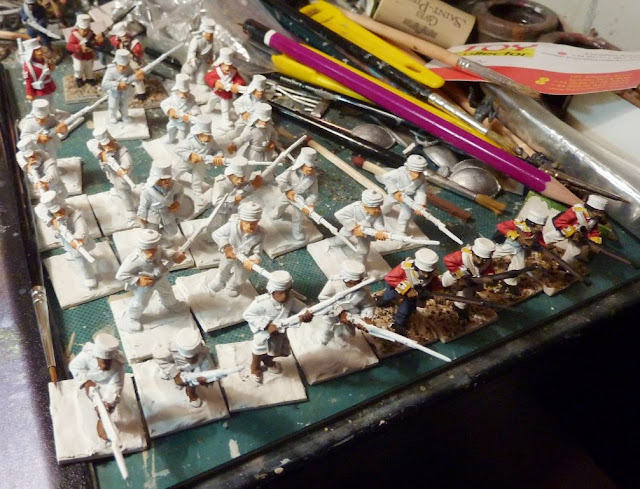 
Having painted my first figure from Mutineer Miniatures range, and started the other ones I had bought, I decided to order enough for a The Sword and the Flame unit for the British. I got these cleaned up and based whilst watching Dancing on Ice with the family yesterday (that Emily Atack is a finely wrought young woman, I have to say). I returned from London a bit early today to watch the mens' downhill from Whistler (a place where I had a very enjoyable week's mountain biking about ten years ago) and had time to undercoat the figures and put the base coat of flesh down too. 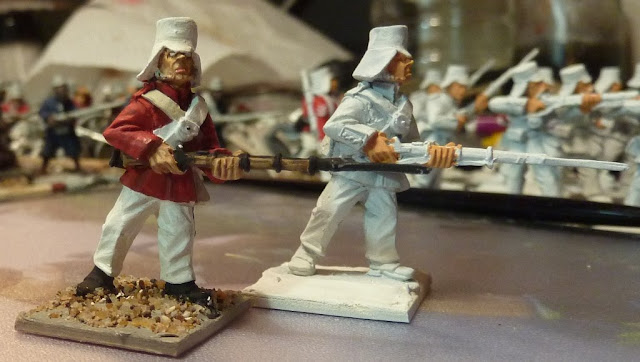 Spot the difference. The original figure I bought last year and the one I got from Mutineer last week. The head is in a different position, added cuff and rifle strap

Whilst doing this I noticed something I have never come across before: the figures I bought recently are very slightly different from the original pack I bought when they first came out. In particular, they have all had straps added to the rifles. In addition, one figure has also had his head repositioned slightly and has had cuff detail added which was missing on the original figure.

I am enjoying painting these very much, as I always do with Mike Owen's figures. I had a bit of a panic at the weekend as someone on TMP said that there was a new sculptor for the range which usually presages disaster! Fortunately, the latest figures up on the Mutineer website are also by Mike Owen so perhaps its all an unfounded rumour. Certainly Mike's splendid work is the main reason I am buying these figures as I never had an interest in the period before, depite visiting India quite regularly. 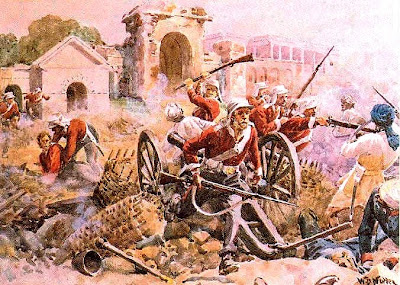 I am struggling a bit with the research on the uniforms. I have the Foundry book which is pretty informative and have bought the Osprey History too. The first unit I am working on is the 53rd Foot and I spent quite a lot of time tracking down details of their colours (as there is a standard bearer in the comand pack) but I think I have enough information for a fair representation of it. The next unit I am looking at is the 32rd Foot who were besieged in Lucknow. The Foundry book has them in forage caps with pugri and in khaki-dyed shell jackets and blue trousers. The problem is that there is quite a famous illustration of them on a sortie wearing the more traditional red, with grey trousers and wearing covered forage caps with a neck flap. The Mutineer website has them in a different uniform again (I think-I can't check as there sems to be a problem with it at present).

Oh well, It would take too many units to build my usual historical armies so I am just going to get some representative units and play some fictional games, in which case it doesn't matter too much what uniforms they have. Except, of course, it does. 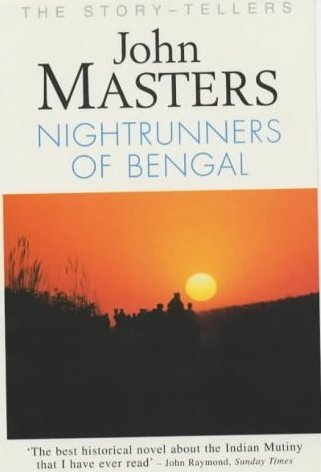 I also find that a novel set in the period helps my concentration on a project so I picked up the splendidly titled Nightrunners of Bengal by John Masters. Masters was an Indian Army officer who also wrote the well known novel Bhowani Junction (made into a film starring Ava Gardner). The fictional Bhowani is also the setting for Nightrunners. This, his first novel, was written in 1951 and by all accounts he was a first rate writer so I am looking forward to it. 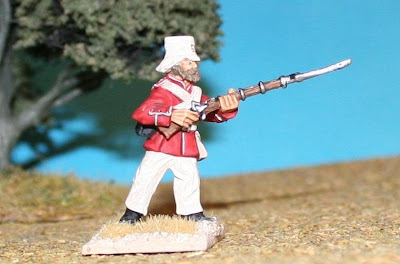 I spent ages painting subtle shading on the off-white trousers. All invisible because of the flash!
Well, yet again I have got distracted! Having come up with my master plan for the next month which involved finishing a group of Zulus and some more Force Publique I have been distracted by Mutineer Miniatures new (ish) Indian mutiny figures sculpted by Mark Owen.
I hadn't got any information on uniforms so didn't start the figures I bought at Colours (or was it Warfare?) but I picked up the Foundry book The British in India by john French and The Indian Mutiny by Saul David. The latest release by Mutineer announced on TMP got me to base the 12 figures I had got and over the last few days I have painted my normal test figure. Like all of Mike Owen's figures it was a delight to paint. So much so that I have now started work on three more and have undercoated the other eight. Worse than that, I ordered enough extra figures to form a TSATF unit of 20 of my first chosen unit: the 53rd foot. I found some TSATF Indian Mutiny rules on the net so now aim to get a unit of each done in the next month.
I have also just started the Saul David book and it looks like it will be as enjoyable as his one on the Zulu War (even though that was not well received by the likes of Ian Knight).
Anyway here is the first figure. 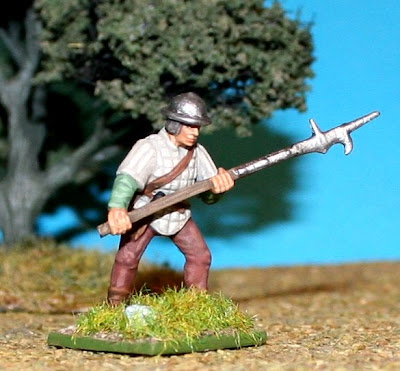 I also painted one of the new Perry plastic Wars of the Roses figures. Also very easy to paint in a way that their metals aren't. 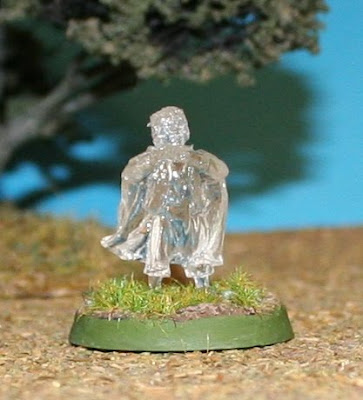 The final figure I did for my daughter. It is the Games Workshop "invisible Frodo". Of course he isn't and my son pointed out that it would be much better to just use an empty base (as his Combat Hex game does). Oh well, I shall count it towards my total anyway!
I am also currently working my way through the director's cut of Troy, which is rather better than I remember from the cinema. Of course this has got me getting my Foundry Trojans out; especially as Newline Designs have just started a new Mycenean range. So much for selling them all on ebay!
Posted by legatus hedlius at 8:52 pm 2 comments: