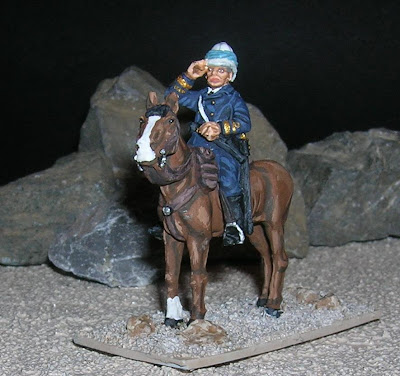 It's not the end of May but I work on a whole week basis.

36 figures this month, 12 more than my target for four weeks. I have now painted 141 figures in 21 weeks which is 6.7 figures a week, so slightly ahead of my 6 per week target. I am 15 figures ahead of target.

This months are a mixture of finishing off Greeks for Cynoscephalae and getting going on my next major project the Sudan 1884.

The British take ages to paint, the Beja are quick!
Posted by legatus hedlius at 9:50 am No comments: 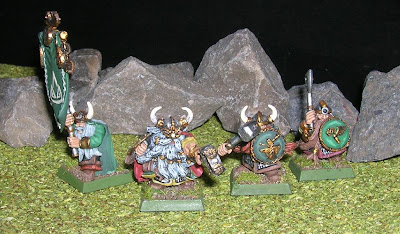 Picked up White Dwarf on the way home today although I don't know why I keep buying it, other than my little boy likes looking at the pictures. Quite a dwarfy issue though, so maybe I will look at it. Never really liked the Warhammer universe but I do like their dwarves (not too much magic -which I can't stand, or ridiculous monsters). The very first metal figures I was given about six years ago were a Warhammer Flame cannon and crew ( I still haven't finished painting it, though).

I have bought a couple of the big Warhammer sets (Battle of Skull Pass and the Dwarf army) as I think my son will enjoy it but have only painted four figures so far. They are nice and I do like them so I won't be eBaying them yet. I can always add a few to the next batch of Dark Age figures I paint. The palette is similar.

I really like the Perries' Lord of the Rings figures, though, and I have painted enough dwarves for a Battle company. I have just bought the new supplement, Khazad-Dum, and that looks really good so maybe I will do some more.
I thought the Moria sequence from The Fellowship of the Ring was one of the most evocative sequences in the trilogy with Howard Shore's music reaching a crescendo of magnificence in the Dwarrowdelf sequence. A mad mixture for me of some of my favourite things: Viking armour, Piranesi Carceri D'Invenzione inspired interiors and rushing about in tunnels like A Journey to the Centre of the Earth. 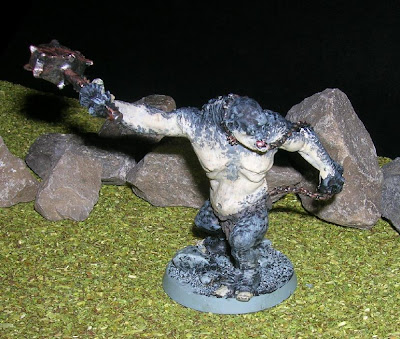 I already have about 30 LotR goblins and a cave troll painted so it won't take much more to enable us to have a game.
I think I like dwarves so much as I listened to Wagner's Ring Cycle a lot when I was about 11! I loved the descent into Nibelheim with all those anvils bashing away!
Posted by legatus hedlius at 9:32 pm No comments:

Labels: Lord of the Rings, Warhammer 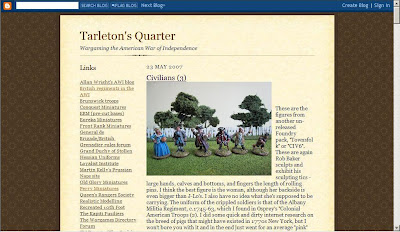 I really, really wanted to do AWI with the Perry figures but in the time it takes to paint one figure with all those cursed straps and belts I can paint three of four Vikings. I think I will pass and put my Ospreys on eBay this week. It's a shame, but I realise that I can't paint everything (especially with the Artizan Spartans approaching -once they sort out there moulding rubber).
Posted by legatus hedlius at 7:46 pm No comments: 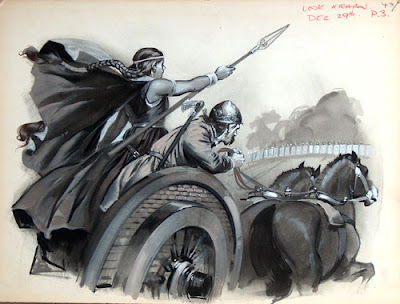 I was saddened to learn of the recent death of the superlative military artist Angus McBride. Like many people I would sometimes buy an Osprey book purely on the basis of his wonderful illustrations. I am lucky enough to own one of his paintings, of Boadicea, done for Look & Learn magazine in 1973. Although in monochrome it has the animation, character and wonderful composition of all of his work.

Angus, you will be missed!
Posted by legatus hedlius at 11:09 pm No comments:

I went to the Society of Ancients Battle Day in Bletchley for our Cynoscephalae Game. I hadn’t attended one of these before but it was great fun and interesting to see so many different interpretations of the same battle. I think there were three other 25/28mm games with most of the rest being 15mm. There were some other Guildford people doing a 6mm game which wins my award for "most looks like a real battle" given the over 2000 figures on the (rather diddy) table.

Although there was a lot of specially constructed terrain on show I have to say that Dave’s green cloth over planks and file boxes looked really good and considerably more realistic than some of the contour map efforts there. In addition, his was the only green terrain; everyone else had gone for sandy brown. 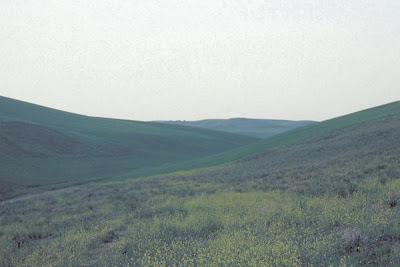 Now Cynoscephalae was fought in the spring and given that the area looks like this today then green was more accurate. During an interesting talk by Phil Sabin of London University in the morning, it was also mentioned that the gradients on the battlefield (whichever one of the 3 possible sites you go for) were quite gradual. Which again, made Dave’s effort more believable than some of the vertiginous cliffs I saw on some of the other layouts.

Unfortunately, Ben was unwell and couldn’t attend so his place was taken by a chap called Peter who had written a set of rules but was unable to play as his group didn’t turn up. 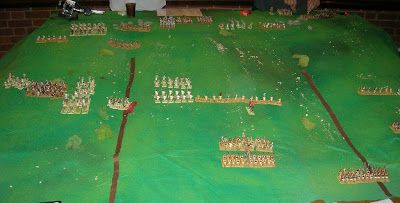 The Battlefield early in the game. The Roman skirmishers advance up the left hand hill.

Dave and Peter commanded the Macedonians and Kevin and I had the Romans. I took the Roman left, which was all skirmishers and cavalry, and advanced up the hill towards Peter who faced me with opposing skirmishers and cavalry. Peter sensibly refused to be drawn down the hill very far and so my troops were whittled away by the terrifying firepower that you get in the Tony Bath rules. 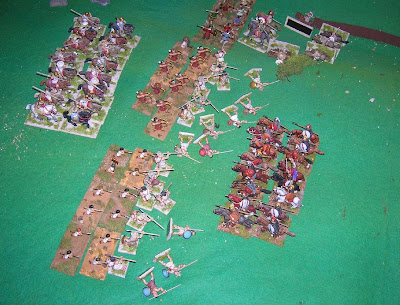 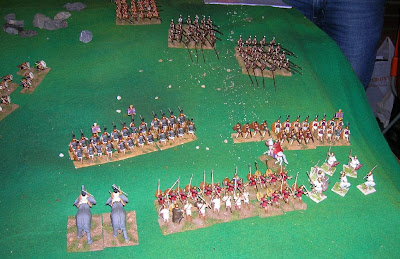 On the Roman right Kevin had to start the long trudge up to the top of the ridge where Dave proved much better at activating his phalanxes than the last time we played the “dice for the unit to arrive” special rule. This fight proved to be a long grind with reverses on both sides. This time the elephants failed to reproduce their impression of a combine harvester and were stampeded by Dave’s skirmishers early on. 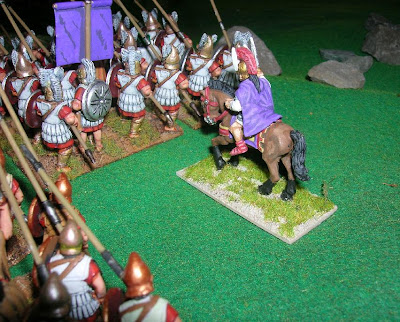 Philip prepares to send his guard pikemen on a commando raid across the ravine.

As most of my skirmishers were destroyed I had to feed in two legions from the centre, particularly as Philip V sent in his elite silver shield guard pikemen (newly painted by Dave). 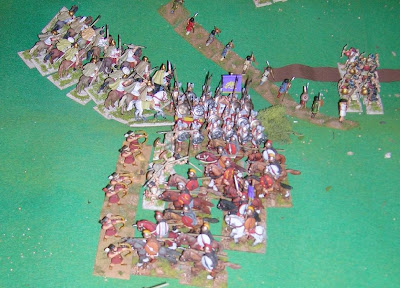 
They tripped down and then up the ravine as if they were manoeuvring on Horseguards parade and attacked what was left of my cavalry (yes, heavy cavalry charged in the flank by pikemen). They totally failed to behave like newly painted troops and changed formation faster than the Red Arrows to deal with anything I threw at them from whatever direction.

By this time I had 3 skirmishers left from the Roman/Greek force on the left and my Velites from the centre had gone too. What was left of my two Legions were surrounded by Macedonians.

We finished on turn 12 having played for around five hours. We could have played another move or two and technically the Romans could have come back (with a lot of luck) but only technically.  There were only about 120 figures left on the board out of around 500. 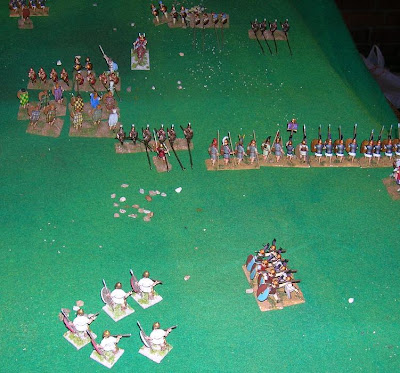 The sorry state of what were 24 figure units on the Roman right!


The Tony Bath Rules are great fun and, for Roman games at least I prefer them to Warhammer Ancient Battles because you can have more linear units.

The next idea is to do the game using WAB and see how that pans out. I’d better put the army lists together!
Posted by legatus hedlius at 8:32 pm 1 comment: