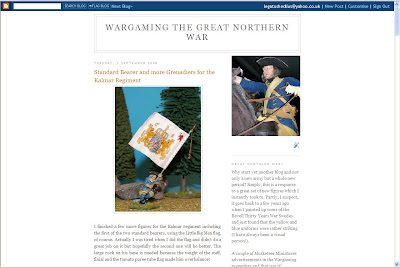 Cavegirls continues to be number one even though Google now rate it as an "objectionable" blog, which it certainly should be! Biggest climber is the Great Northern Wars blog which just shows that posting stuff on it does raise the hit rate!

The new Zulu Wars blog has picked up a respectable 169 views in less than a month. 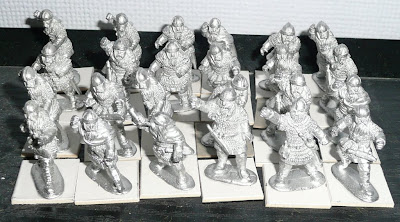 Musketeer Saxons: on the shelf, but for how long?

I've not been getting much painted this month as the light is too poor and I just can't paint shading or detail under artificial light, even with a daylight bulb.
I've been basing a lot of new figures and my shelf which holds units in progress has been getting crowded so I decided to have a sort out and put away all the figures I am not likely to be working on for a bit. So away went the unit of 3rd Century Romans, the unit of Caesarian Romans, the late Romans, the Greeks, the Spartans, the Back of Beyond Chinese and the Ngoni. This immediately made me feel better and less under pressure!
Going forward I have nearly finished the first Empress Zulus and have made a start on the British. The Zulus have taken longer than I thought, especially the shields. I also have another unit of WW1 Prussian Guards under way. I may do a few more Beja before I get any more Zulus as I want to finish the next Rub of 60 figures. I have also based some Musketeer Early Saxons so might do the odd colour on those (they take ages) whilst I get on with the others.
Posted by legatus hedlius at 9:55 am No comments: 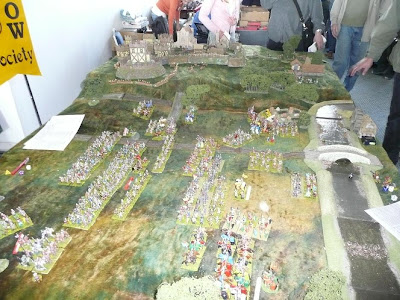 The Lance and Longbow Game at Colours
Colours is becoming my favourite show so I was pleased to see so many people there on the Sunday; it certainly looked busier than the year before.
I was quite restrained and bought some Great War Miniatures Gemans, some Warlord Miniatures Romans and Celts, some more Perry Sudan and some Crusader mounted gladiators. I also had a very brief chat with Bill at Musketeer Miniatures. He didn't have any GNW figures there but I bought some early Saxons and some of his new BEF British. Actually they are from his "Irish War of Independence" range but I am afraid I still see these as Irish terrorists and can't understand why anyone games them unless they are Irish or Bostonian (and therefore misled). Nevertheless the British are gorgeous, albeit slighter than Great War Miniatures and Renegade. The good news is that he plans to turn these into a full BEF range.
More goood news is that I actually saw a GNW Russian pikeman and he is re-organising his Swedes so that you get two ensigns in a pack. I still think that Musketeer Miniatures are turning out some of the most appealing figures in the market at the moment and don't regret any of the purchases from Bill's ranges. Indian Mutiny, yes please!
My favourite game was the medieaval one from the Lance and Longbow Society although my little boy favoured the two set at Pegasus Bridge. He has been to Pegasus Bridge this year with the school and was happily chatting with the (very friendly) people running the 28mm game. Some benefits from his £12, 500 a year school fees I suppose!
Posted by legatus hedlius at 9:24 pm No comments:

Tanks for the Memory..

I've always liked tanks. My first wargaming at school was Western Desert WW2 and my friends, Bean-Kid, Cesspit and Jimbo built dozens and dozens of Airfix Kits and mixed them in with many out of scale RoCo minitanks and fought vast battles in our dining room on our 7' x 7' board. I still have many of these and my little boy quite happily manoeuvers them across the carpet in very unhistorical clashes with Japanese, French and Russian tanks. I then started buying the ESCI tanks at university but made very few and now sell them off for outrageous prices on eBay -£42 is the record for one Italian tank!. 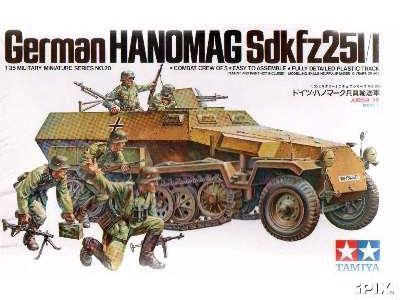 I also started to build some of the Tamiya 1/35 tanks kits while I was at school: the Tiger, the Hanomag halftrack with Panzer grenadiers (when it came out - I still remember the Military Modelling article on how to build it), the Stug III (complete with snowy base) and my favourite, the Jagdpanther.
I love the new Chieftan metal kits and have bought a Panzer III (unbuilt, as yet) but still feel a bit queasy about WW2 wargaming.

However my little boy's new interest in Warhammer 40K (which they play at school) has suddenly made me realise that I can build big tank models without worrying about depicting a war where my family fought on both sides (British and Austrian). So today I visited the happy smiling people at my local Games Workshop and picked up a Space Marine Razorback. When I opened the box it brought back all sorts of happy Tamiya feelings but I can build it without feeling guilty about being a war-mongering, fascist wierdo, as it's all make believe!
Yippee! Still need to get the Zulus finished first though!
Posted by legatus hedlius at 5:16 pm 1 comment: 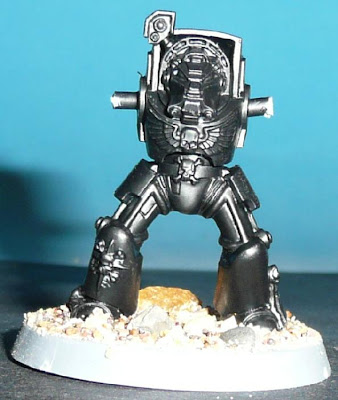 Well, this is my first Warhammer 40,000 figure and I have now undercoated it and done a nice rubble strewn base. Looking at all the detail it is actually quite daunting but I will have a go. I'm even using (horrors) acrylic paint! I will do the arms separately.

I have had to create a new 40k folder in the wargames section of my pc. How embarrassing! I am far too old to be painting this! I was born well before there even was a Games Workshop!
Posted by legatus hedlius at 11:52 pm No comments: 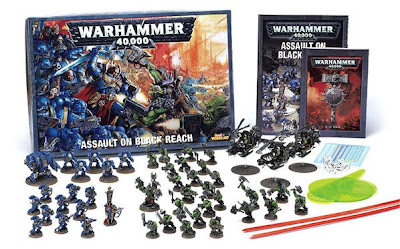 No academic historical justification whatsoever. They are toys!

I have been buying White Dwarf for the last few years solely for the Lord of the Rings stuff. I also occasionally read the Warhammer articles but always ignore the 40K pieces as I have no interest in weird looking SF armies blasting away at each other at sub-medieval firearms ranges. But. Having looked at the free figures with this month's White Dwarf I thought; maybe I might paint them as an exercise. Then I thought, "these are really nicely detailed". Then I thought, maybe I can have a go at painting them in a non-pristine GW way. Just as Star Wars revolutionised the depiction of the future (I know, it was really the past) so shouldn't these figures look battered and grungy. Maybe I can paint them in a battleworn way. Inside the magazine was an article pushing the new boxed set, Assault on Black Reach, and it wasn't a huge jump to thinking, "maybe I will just pick this up and play a game with my little boy". Sadly, there is a GW shop exactly 170 yards from my new office and I soon found myself having the sort of, longer than you intended when you went in, discussion with one of the in-store Moonies/Scientologists. Anyway they promised to get me a set a day early and I am really really thinking about it. This way madness lies, for sure!
Posted by legatus hedlius at 4:50 pm 3 comments:

Giles Allison revealed that he has a bucket load of figures to paint for his forthcoming AWI mega-game in a couple of months. I am running seriously behind on my monthly totals so I need to have a good go too.

I usually paint batches of six figures at a time and try to get six figures done a week but I have seriously fallen behind on that the last few months. I am, therefore, going to try a completely different aproach this month and rather than try to do so many a week I am going to aim to complete a certain amount by the end of the month. I am working on a number of groups of figures: 12 WW1 Germans, 16 Zulu War British, 16 Zulus and 10 GNW Swedes. I am just going to try to get all of these moving along without fretting about finishing "x" by Sunday. Let's see how it goes!
Posted by legatus hedlius at 10:33 am No comments: 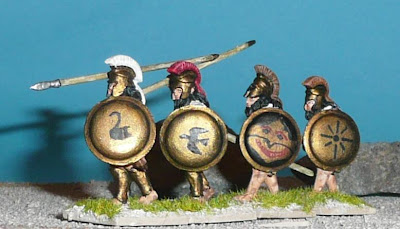 Much better due to the fact that I cranked out a few on holiday.

Sudan British 1
WW1 German 12
Great Northern War Swedes 6
Spartan Hoplites 4
A total of 23. So far this year I have painted 162 figures in 35 weeks a total of 4.6 figures a week and well under my target. I should have painted 210 so am over 50 adrift. Oh dear! Lets see what we can do this month!
Posted by legatus hedlius at 11:12 pm No comments:

It's time to review the progress on the second four months of my painting objectives.

My initial priorities in January were:

I also added Darkest Africa in May.

What I have done from May to August is as follows:

Of my lesser priority category I did the following:

So going forward for the next four months I think that my priorities will be as follows:

Sudan
I must get those cursed Highlanders done (at least I have started them) plus some more Beja. I am well on the way to finishing the second rub of 60 figures. I also have an Egyptian and a British field gun to do.

Great Northern War
Musketeer Miniatures are promising Russian pikemen and command over the next few weeks. I am progressing well on the Sewedish infantry so will do some more.

Darkest Africa
With the Zulu War to do I think I will back of the Ngoni and Ruga Ruga for a bit, although I have five more of the latter under way.

The Great War
I am really enjoying painting my Prussian Guards so will do some more of these definitely.

Zulu War
I love the new Empress figures and will get going on these.

Napoleonics
Likewise the new Alban riflemen are tremedous and French Voltigeurs are on the way.

Lord of the Rings
I have started some plastic knights of Minas Tirith and these are pretty quick to paint so will try and finish these by Christmas. I always play a Battle Companies game with my little boy at Christmas so maybe I can complete an Orc force for that as well.
Posted by legatus hedlius at 5:18 pm No comments: 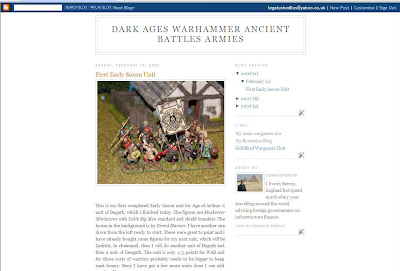 I expected August to be down a little because of the holidays and that is true of every site except the Dark Ages one which is this month's highest climber. The numbers are down on Sudan a bit but it has overtaken Pulp. At least I managed an entry on the Sudan site last month!

It is interesting to note that the monthly totals are largely the same; often only about 10% different month to month. Also number of postings does not seem to effect the totals. The question is, therefore, do I do more postings for the low scoring sites (and hence paint more figures) or do I respond to ones where the views are increasing. On the former method I should be working on Swashbucklers and on the latter, Dark Ages. I quite fancy doing some Dark Ages figures again, though, for reasons I will put on my Dark Ages blog in the next few days.