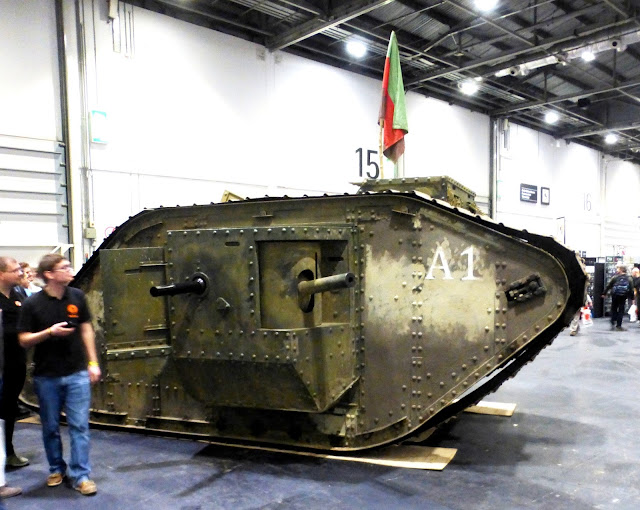 Just back from a very short trip to Salute; I think I was in and out in just under two hours.  I arrived just after 11.00 am and the free giveaway figure had already run out, which was fine as I didn't want it.  Given  the theme this year was the centenary of the end of World War 1 I didn't see much in the way of WW 1 games (there were a couple of African set ones).  In fact the most Great War thing was this reproduction tank which, while being made from wood, can actually move under its own track power,  It has featured in a number of TV and film productions (including Wonder Woman, Eric the Shed informed me) but was a rather stunted, foreshortened thing; rather in the way that James Cameron sliced a big chunk out of the front of his Titanic reproduction. It's almost like an anime version of a tank. Still, it looked excellent from the front. 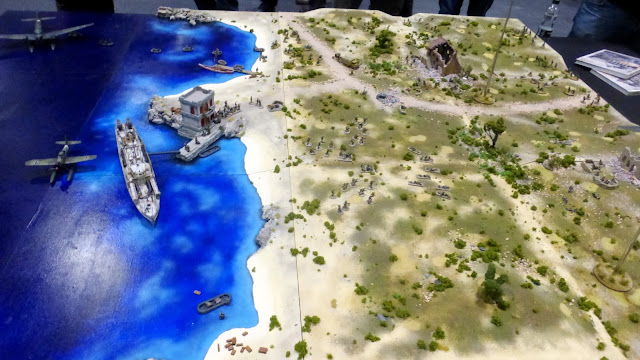 Compared with last year there were a number of games which caught my eye as regards scenery.  As ever the venue was stygian and you only had to look into the bridal show across the way to see the difference.  I liked this World War 2 Greek Island set game featuring the Battlegroup rules. They really caught the look of the scenery of the region. Extra marks for the seaplanes 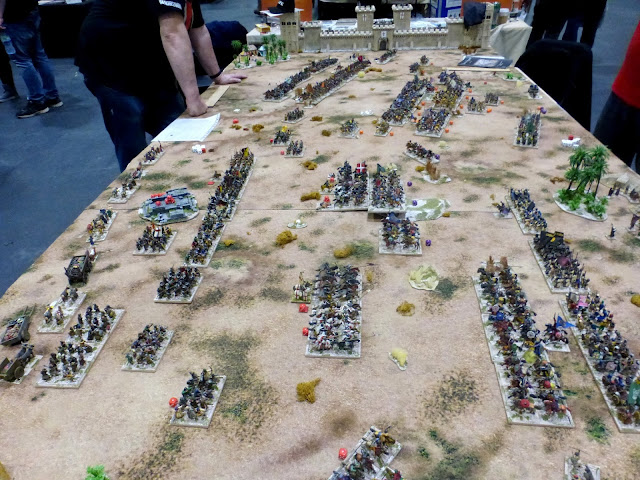 More arid scenery was depicted in this big Crusades game by show organisers, the South London Warlords, using the Sword and Spear rules which I have never played but have heard good things about. 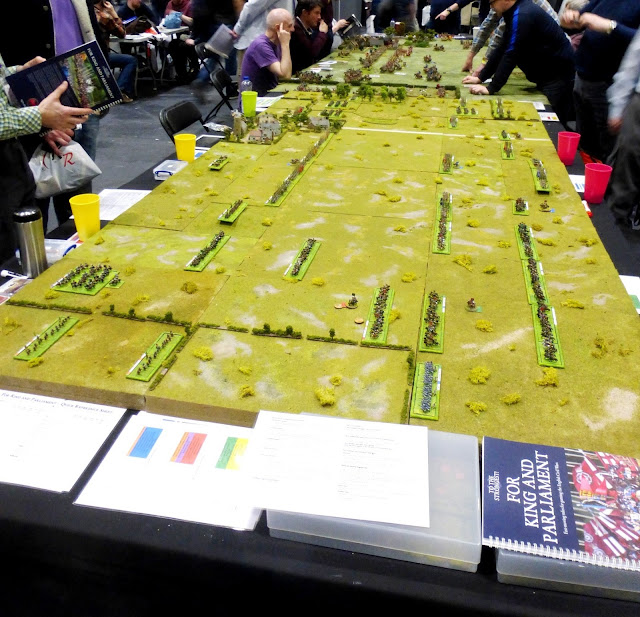 It was odd to see a Big Red Bat game which did not feature ancients but there were still plenty of pikes in this English Civil War game, witch was promoting his new For King and Parliament rules (shouldn't it be For King or Parliament).  Anyway, he was so busy I didn't get a chance to chat to him, this year. 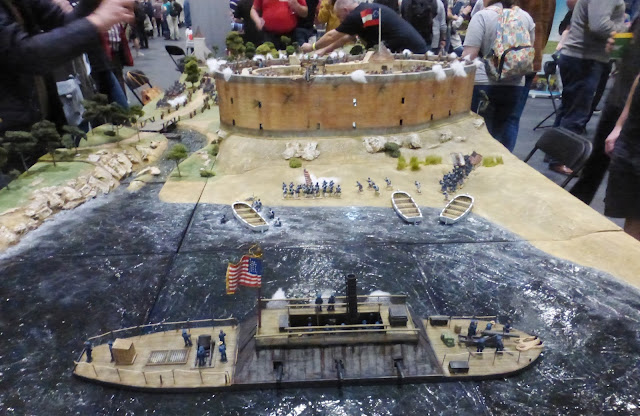 I haven't given up on my American Civil War project but, again, ACW seemed thin on the ground this year.  Most impressive was this one featuring a fort and an ironclad.  Great water effect. 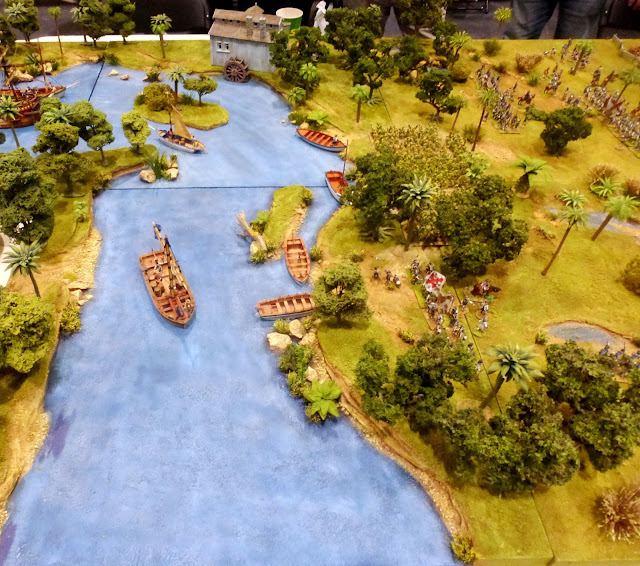 Another American set game but a different conflict was this one, featuring a fictitious battle in Florida in 1761, with the Spanish attacking a plantation.  A really nice board. this one. 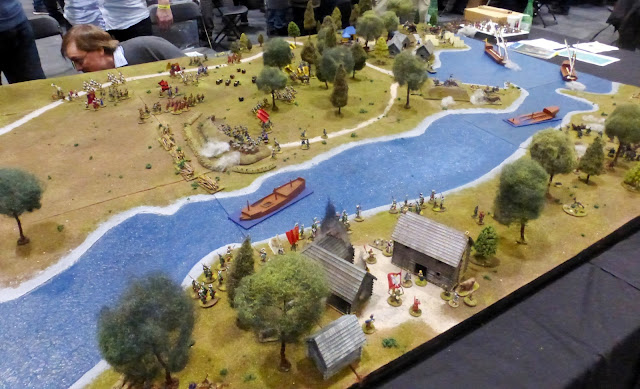 Maybe I just go for boards with water on them as I also liked Dalauppror's Great Northern War clash, the Battle at Stäket, 1719, using The Pikeman's Lament. 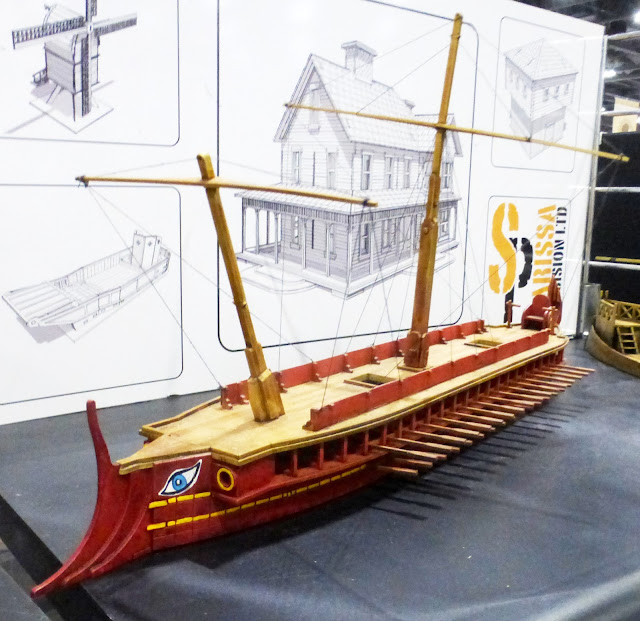 I have been lurking on the Gangs of Rome Facebook page and there are some nice figures by Footsore Miniatures, backed by a great range of Roman buildings by Sarissa Precision (except for the roofs - they really do need 3D Roman tiled finishes - buying tile effect plasticard for this is possible but always seems to be out of stock everywhere).  The Sarissa stand did have a Roman house with a proper roof and it looked fantastic.  I was most impressed by their Roman galley, however,  Some things work with laser cut MDF (like this) and some things don't (anything cylindrical).  In the end Gangs of Rome makes me feel a bit queasy as, basically, it is not a wargame but a murder game (I wouldn't play gangsters either).  I like my little soldiers to believe in a cause!  Even if they are French and therefore misled. 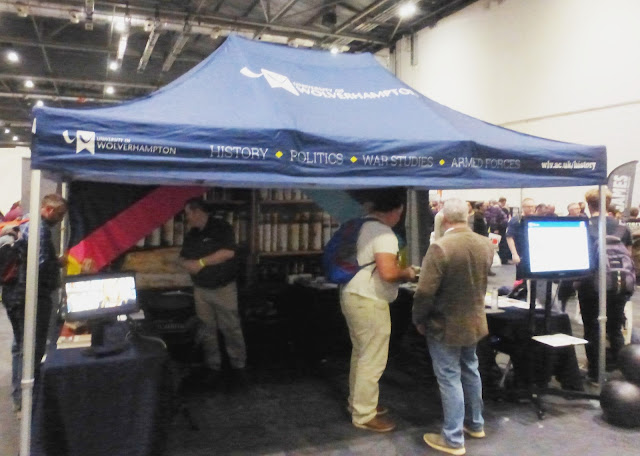 I was somewhat surprised to see the University of Wolverhampton trying to recruit students for their history courses.  I don't think I have seen such a thing before at a wargames show.  I do wonder if they hadn't quite done their research into the average age of wargamers properly.  They were probably expecting the place to be filled with the Warhammer generation. 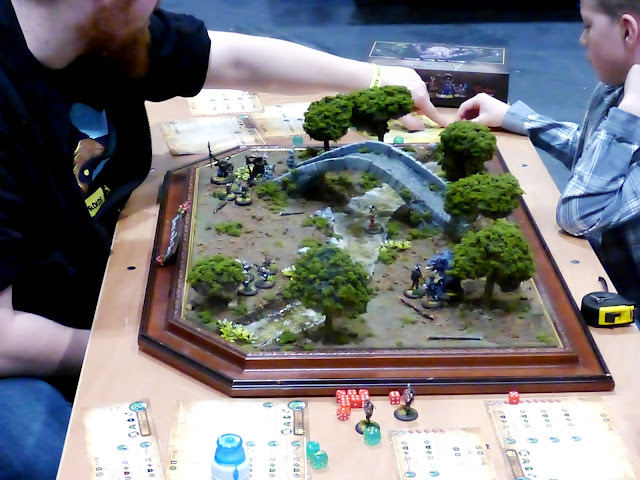 The numbers were as high as ever, I think, the light was as bad and there were a lot of Fantasy and SF manufacturers with large and impressive stands.  For me the demonstration games were of a higher standard than last year.  The absence of the London Marathon registration (it is next week) made moving around Excel and getting something to eat and drink easier.  From my point of view, there were not many people selling scenics, other than the MDF giants,  Resin buildings seem to be dying out. There were still a fair number of small 3' x 3' type games, many of which looked like those little gardens you had to make at junior school using a roasting tin, moss, stones and a mirror for a pond.  My one, inevitably and somewhat controversially, had dinosaurs in it, when I think it was supposed to be an Easter garden. 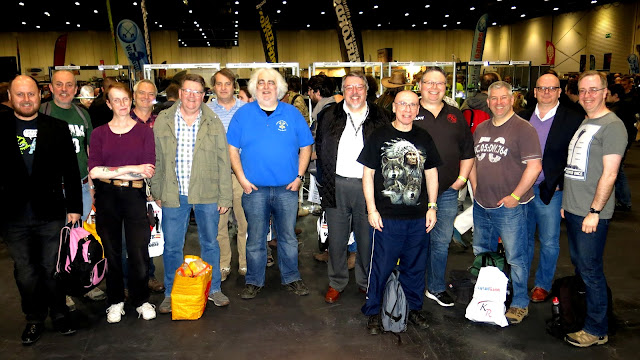 I am sixth from left


I went to the bloggers meet up, which seemed smaller this year and met Eric the Shed, Alastair and Tamsin.  I also ran into another Shed regular, John, at Waterloo on the way back.  The picture is from Big Lee's blog.  He has some excellent photos here. 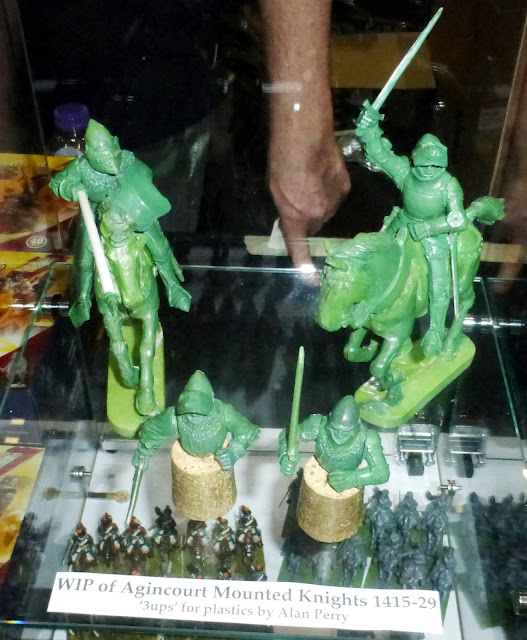 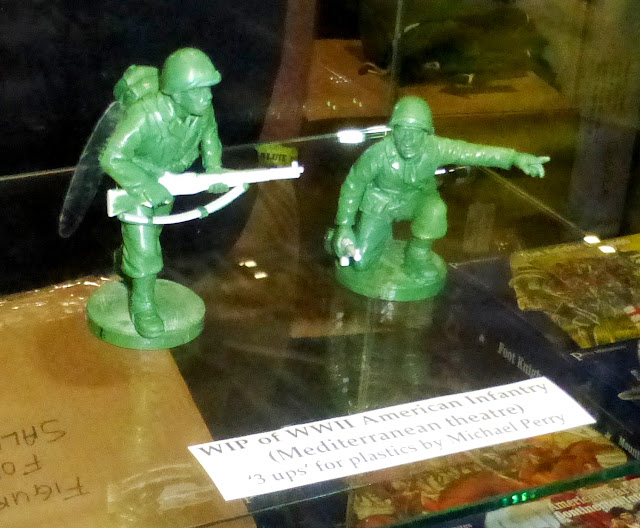 There was no Dave Thomas stand this year (rumoured he has stopped doing shows) so there was nowhere to get my metal Afghan cavalry as the Perry stand (which wasn't where it was supposed to be on the map) was just selling their plastics.  There were two sets of three-ups for new sets: Agincourt mounted knights and US WW 2 infantry, neither of which I am interested in, fortunately.  I resisted the new Napoleonic chasseurs as I had already bought some other figures. 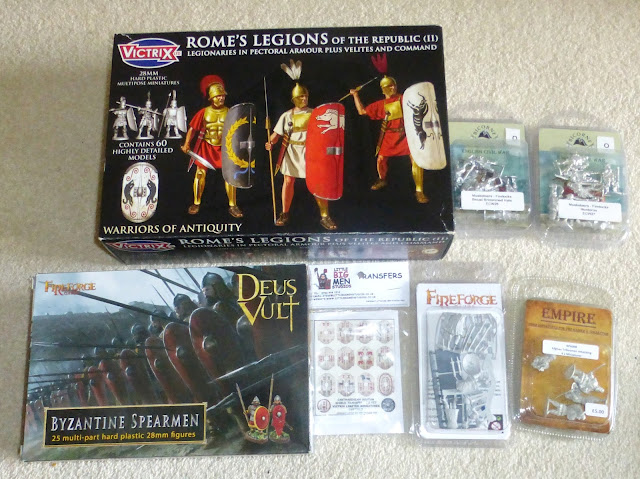 I think I bought more figures than last year.  A set of Afghan foot from Empire, as they will go into an army I am painting at the moment.  Some LBM Carthaginian shield transfers, which were on my list. Two packs of Bicorne ECW firelock men to replace the historically inaccurate figures in my Tower Hamlets trained band,  What really wasn't on the list were a box of, and some command for, the Fireforge plastic Byzantine Infantry.  This is one of my earliest 28mm armies and I do, occasionally paint a few more for it. 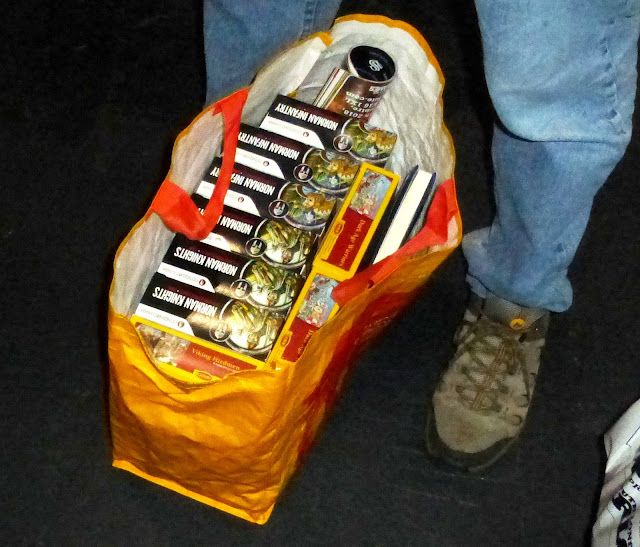 "You have things in your bag," cackled the Old Bat, accusingly, when I got home.  I showed her this picture of Eric the Shed's purchases.  "His poor wife!  Although he can buy as much as he wants as he can do DIY." she said.

Posted by legatus hedlius at 4:39 pm