The Hobbit: Escape from Goblin Town 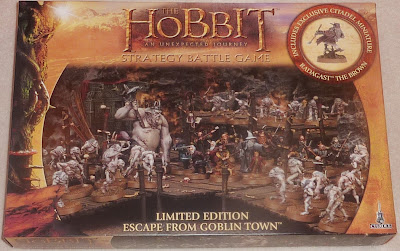 I suppose it was inevitable, but having resisted buying The Hobbit: The Escape from Goblin Town at the weekend (mainly because Games Workshop in Epsom wouldn't answer the phone, as I wanted to check whether they had any in stock) I was in Oxford Street today having just changed $1000 back into sterling.  Even £75 seemed like a small amount, therefore.  Or rather £75.10 as GW charged me 10p for the bag to take it home in!   Talk about mean! 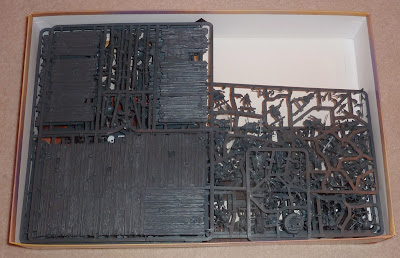 My daughter, Charlotte, is more excited about it than my son, Guy, who used to be my regular LotR opponent, as he now only wants to kill zombies on his xbox (and I refuse to do zombie wargames!).  GW man in the shop said that they had been selling really well but then the North Koreans keep saying that their rocket programme is doing well too.  So, now it's time to put on some Howard Shore and, as the annoying chap from Meeples and Miniatures always says "lets see what we have in the box".  Well , not that much compared with some other GW boxes I've bought.  There is actually white space, which isn't such a bad thing as I often find that once I have taken everything out of a box like this I can't get it all back in again without it bulging out everywhere.  Like trying to put a tent back in its case.  Not that I have ever camped in a tent, of course.  That would be ghastly.  Except possibly in the Ngorongoro Crater with a large tent you can stand up in, seat ten for dinner and have a lovely girl in a pith helmet to fetch your claret for you. 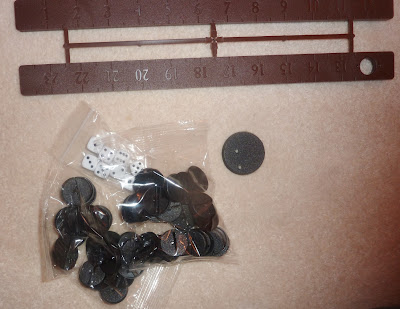 First out the box is all the usual bases and dice plus a rather clunky 24 inch ruler.  I know it's supposed to be everything you need to play the game in one box but do GW really think that people don't have tape measures or rulers at home?  Maybe they don't and it's only wargamers who have a surfeit of measuring instruments.  I suppose if you had just unpacked a box in your tent in the Ngorongoro Crater to have a quick post-prandial skirmish along with the Quinta Do Noval 1896 (which I remember having at our final legal dinner at College - it's still the only nineteenth century wine I have ever had) you'd be jolly miffed if you didn't have a measuring stick.  It would also be useful for swatting the girl in a pith helmet with if she didn't get more bottles fast enough. 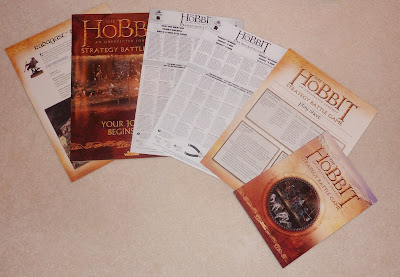 Inside we have no less than six printed items.  Black and white instructions for the figures (those that have multiple parts anyway) and the scenic items like the Goblin King's throne and all the planking.  There is a separate sheet for the limited edition Radagast the Brown figure.  Also included is a separate colour A4 card with Radagast's statistics and a scenario on the other side. There is a two page summary play sheet which could have had a lot more information on it.  There is an A4 44 page introduction to the game with most of the pictures coming from a Goblin Town skirmish but containing a few stills from the film itself, as well, which is always useful for reference.  Finally,  the rules themselves which are in a small A5 format book.  These are 144 pages and I will leave it to others far more clever than me to point out any differences between the old LotR rules and this updated version, although I gather monsters are stronger.  One thing I did notice was that the writing is very small and I couldn't possibly read it without glasses, so that means, inevitably, buying the full-sized hardback version, I suppose. 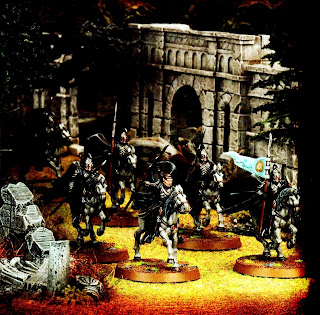 One other thing I noticed in the main rule book was this picture of mounted elves.  These don't look like the existing Galadhrim knights so are they something to come?  They don't look like a conversion, either 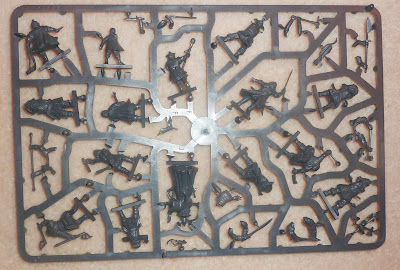 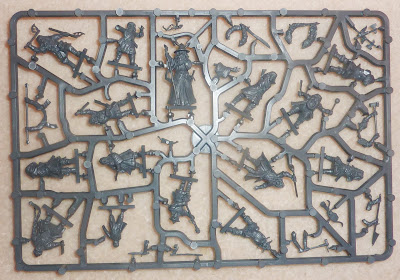 The first sprue contains all the principal "good" characters.  Some are multi-part and need arms sticking on.  The detail is very good for plastics and many (although not all) of the faces do look exactly like the characters from the film.  Still, I would have preferred metal, or, rather, Finecast for these.  Maybe these will come out in the future. 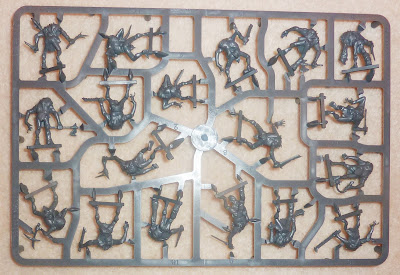 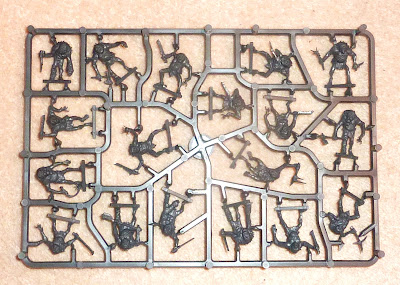 There are two identical sprues of goblins; all one piece figures.  Many people have commented that they don't look anything like the goblins in The Fellowship of the Ring (although no-one actually called them "goblins" in that film) but that isn't GW's fault as presumably they reflect the creatures from the film.  They're bigger than the old goblins and look more orcish  They are very nice except that they are covered in boils.  It is weird, I know, but I really can't stand figures with lumps and boils on them; just as I don't like misshapen ugly figures, even if they are supposed to be ugly.  The Warhammer giant is a figure I would never buy, for example, as his body is just too slack, soft and nasty looking.  That's why I could never paint zombies.  Too ugly!  The other thing I don't like is the nasty pink tinged white that the GW painters have used on them.  I will have to see what they look like in the film, of course, but I am hoping for more of a grey colour.  Sorry that the picture of the front of them isn't very good but I had two attempts at doing them and have had a long day so couldn't face it again. 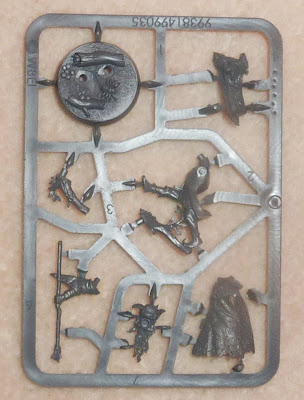 The "special edition" Radagast figure has no less than six pieces and is a very curious figure indeed.  I can't say that I am that excited by having a plastic model of the worst Dr Who ever, but there we are.  It also features another dislike of mine, scenic items attached to the figure.  Grr! 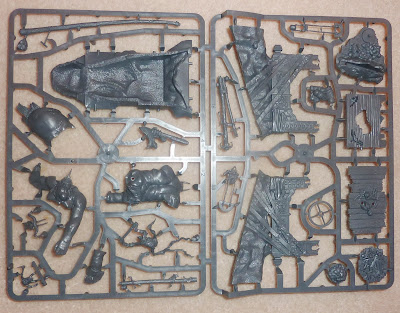 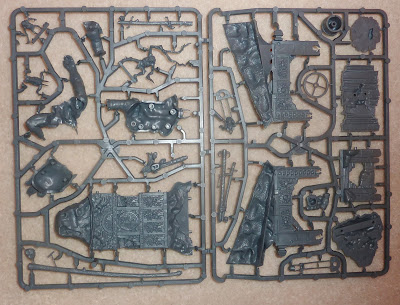 The biggest figure sprue in the box features the Goblin King (another very ugly figure) and his throne, plus some other bits.  The throne is very detailed, if rather Warhammer-like but, again, I believe it is based directly on the item from the film. 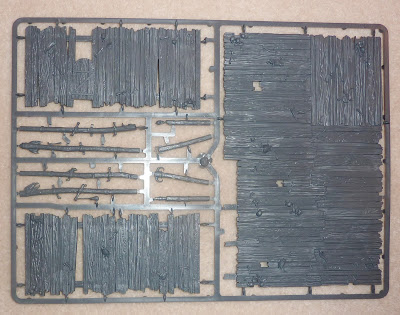 Finally, you get two sprues of the infamous planking that makes up Goblin Town (it seems).  Others have said that they will make their own, which seems sensible. The floor elements themselves are very solid with deeply etched detail top and bottom.  They are covered with horrible skulls, bones and worse, however.  This is not good if you want to use multiple sets to build a bigger environment because of the repitition.  I wonder how many sets at £35 you would need to build the layout that they used in this month's White Dwarf?  Some of the fittings on the posts look quite flimsy, too. 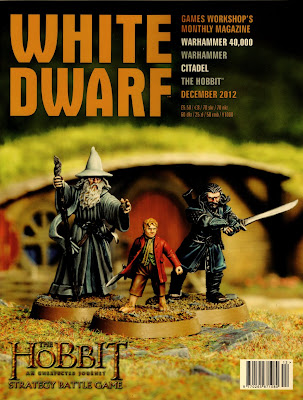 So, all in all it's an interesting set and I am sure that I will paint all the figures eventually, although not before getting some more colour photographic reference of the actual characters from the film.  GW usually paint their Lord of the Rings figures too brightly compared with how they look in the films.  The Bilbo figure on the front of this month's White Dwarf, for example, has a bright red jacket, whereas all the stills I have seen from the film have it a much darker shade. 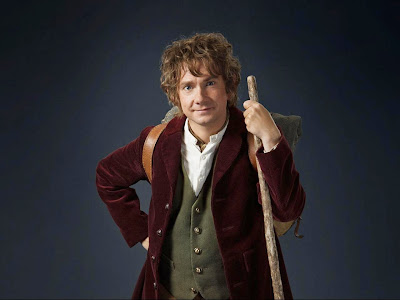 Usually with a set like this I would start by painting something from the rank and file but for this one I think I may start with Bilbo Baggins, simply because there is more photographic reference around for him.  It's got me even more keen to see the film, anyway!
Posted by legatus hedlius at 9:54 pm

Labels: Lord of the Rings, The Hobbit