Come Fly with Me - The Lockheed Constellation for Frank Sinatra's centenary

One of the great album covers of all time

Today is the 100th anniversary of the birth of Mr Francis Albert Sinatra, one of the very few male singers I listen to.  I have been enjoying Sinatra’s wonderful 1958 album Come Fly with Me.  Apart from the class of Mr Sinatra and the Billy May Orchestra, in supremely glossy form, I am very taken with the wonderful cover for this album, which comes from a time when air travel was still a glamorous adventure.

A grinning Sinatra indicates to a, no doubt, lovely young lady that she should hop on with him to the TWA Lockheed Super Constellation in the background. The blue sky, the shiny airliners and the waiting stewardess all promise a brightly coloured and supremely glamorous international fifties adventure.

However, all is not quite as happy and optimistic as it might appear. Beatles producer George Martin was in the studio with Sinatra when he was shown the artwork for the cover. Apparently, he was furious at seeing the illustration, saying it looked like a TWA advertisement. Whatever he thought, the cover went out and the fact that Capitol records gave an acknowledgement to TWA on the reverse of the cover does make you wonder if there wasn’t some early product placement going on.

The second issue faced by the record company was that the family of Rudyard Kipling objected to Sinatra’s performance of On the Road to Mandalay and, as a result, on all copies of the record issued in the British Empire the track was replaced by Chicago.

Although, looking back at it today, the Lockheed Constellation looks like the epitome of fifties travel, in fact, by this time it was already becoming obsolete. It was the last gasp of a way of flying that was to disappear with mass jet flight. The De Havilland Comet had already become the first jet airliner and the first production Boeing 707 flew the same year that Come Fly with Me was recorded, 1957. The first Douglas DC8 flew the year the album was released, in 1958. These intercontinental jet airliners killed the Constellation dead for anything other than local flights.

The original version of the Constellation

In 1937 Lockheed had been working on a four engine pressurised airliner to be called the Excalibur. However, this planned plane was cancelled when Trans World Airlines, encouraged by shareholder Howard Hughes, requested a plane that could carry forty passengers 3,500 miles, way beyond what the Excalibur could have managed. So Lockheed developed the Constellation instead and the first one flew in January 1943. During World War 2 they were used as long range troop transports. Post war they at last were able to fulfill their original purpose as airliners with the first one being delivered to TWA in October 1945. They launched their first regular transatlantic flight with it in 1946. A Lockheed Constellation still holds the record for the longest non-stop passenger flight as on TWA’s inaugural flight from London to San Francisco in October 1957 the plane stayed in the air for 23 hours and 19 minutes. 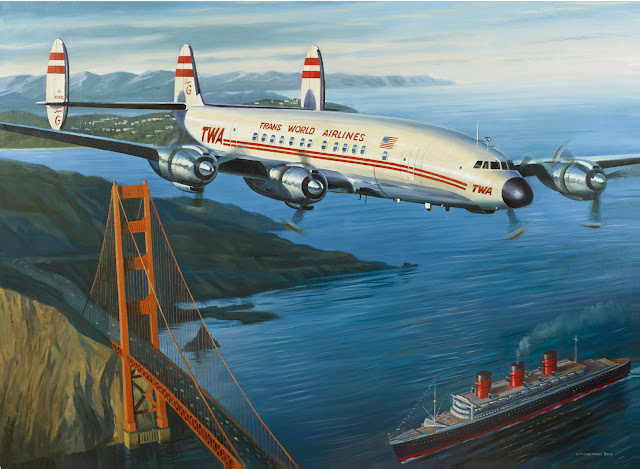 In 1951 a lengthened version, with capacity for 109 passenegers, first flew. It is instantly recognisable by its square windows as seen on the cover of Come Fly with Me.

This is how air travel should be!

The plane’s elegant profile came from the fact that no two bulkheads were the same shape. Unfortunately, this made the plane expensive to build and less able to cope with pressure variations and all subsequent airliners used the cheaper but less interesting tube shape. The last scheduled Constellation flew on a passenger route in 1967.  856 Constellations were built and just 19 civilian and 8 military versions survive.

Although the Constellation would be instrumental in making flying much more attainable for ordinary people it was a very luxurious flying experience in its intercontinental days. Proper beds were made up for sleeping and passengers sat in large armchairs eating real food and drinking drinks served on silver trays.

Coffee, tea or me?

Of course, partly, all of this luxury was because people really needed to be induced to fly in the days when planes fell out the sky rather more than they do today. However, it was also because flights were expensive and rich people tend to be fussy about such things!

Come fly with me!

So today we can only dream of boarding a Constellation accompanied by a lovely woman dressed in the fashions of 1958.  It would not just be your travelling companion either, as you would have been able to look forward to being pampered by beautiful stewardesses.  In those days they had to be young, slim, well educated and single as this TWA recruitment advertisement from the fifties shows.

Today is also my sister's birthday and she is shortly off to San Franciso for Christmas which means I will miss out on one of her superb Christmas lunches.  At least these days it won't take her nearly 24 hours to fly there!