No doubt quite a lot of you remember the days when Airfix kits had written instructions, before the days when pandering to Johnny Foreigner saw the end of the phrase 'locate and cement' in favour of pictorial instructions, as these ignorant foreigners didn't understand English (although, in reality, they almost certainly did). Apparently, Airfix are doing very well during the lockdown with sales beating even the pre-Christmas period and they were even mentioned in the Times a week or so ago. While I would love to have a go at an Airfix kit (or finish that 1/48th Spitfire I have actually done quite a bit of) sadly the pressures of my current work for the government means I do not have all the spare time others do. I have to say the Airfix PR team are playing a blinder in pushing their product as a boredom reliever through social media (shudders, even as I type the words)  and I am pleased they are doing well, as they have been through several rocky periods in the past and they are a real part of my childhood. 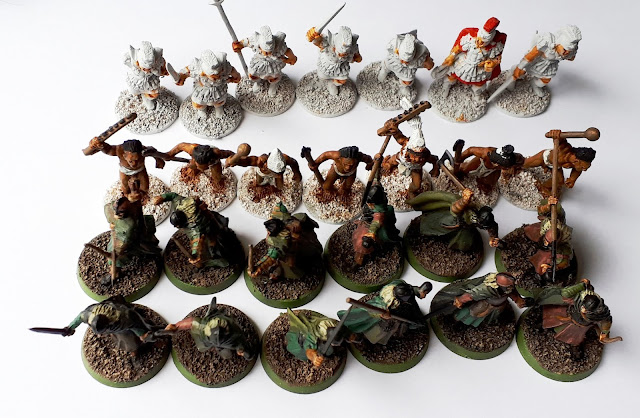 That's not to say I have eschewed the heady smell of polystyrene cement altogether, as I am working on two sets of plastic figures at present. Admittedly, there is not much gluing to be done on the Games Workshop Warriors of Rohan, other than sticking on a few shields. I had a good day on them yesterday; now that I am happily (mostly) embracing my blotchy painting style. I did make one mistake on them, though.  One of the many problems with my eyesight is a loss of colour sensitivity, so I have, for example, difficulty in distinguishing some blues from greens. I did one of those online colour blindness tests recently and only scored two out of twenty, although, apparently, colour blindness is much more common in men. Oddly, the problem is worse in bright sunlight. This has become an issue when painting the Rohan figures, Stupidly I painted all the slightly different greens on the base colours first and then decided to shade them some time later. Usually, I paint the base colour and then shade it straight away. As a result I could not tell which paint I had used on parts of them and ended up shading them with the wrong greens. I am not going back to re-do them but will remember this when I start the Rohan warriors on horses later in the year. As the Old Bat's very Scottish grandmother used to say: 'No-one running for their life will notice'. 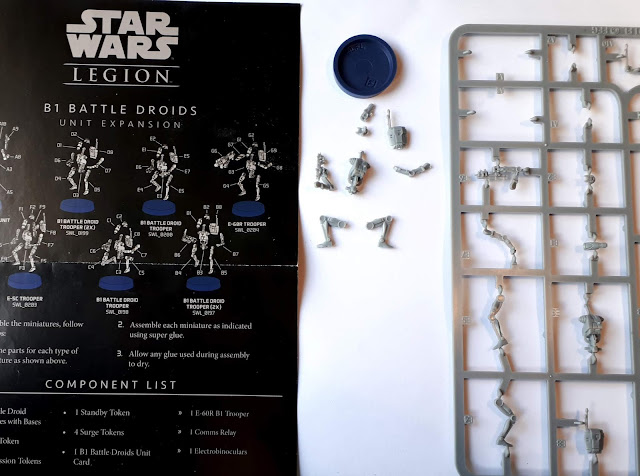 A very different plastic prospect are the Star Wars Legion battle droids that are Project 4 for 2020 and will shortly become Project 3 as the Rohan warriors are nearly done (or maybe I should just keep adding numbers rather than just having three numbered projects). Incidentally, I had a conference call with someone this week and she insisted on pronouncing it 'proe (rhymes with Edgar Allan) -ject' not 'prodge-ect'. It drove me mad. Short 'o'! Short 'o'!  Being Irish is no excuse! Goodness me these droids are a fiddle, though. As you can see from the above they come in lots of teeny-tiny pieces with teeny tiny instruction which you have to locate, cut off, sand and then cement.  I thought I had made four, sometime last year but, disappointingly, I discovered I had only put together two of them, I put together another two yesterday and it took over an hour. Far too stressful to be relaxing. I thought Victrix Napoleonics were bad but they are as simple as Duplo compared with these. 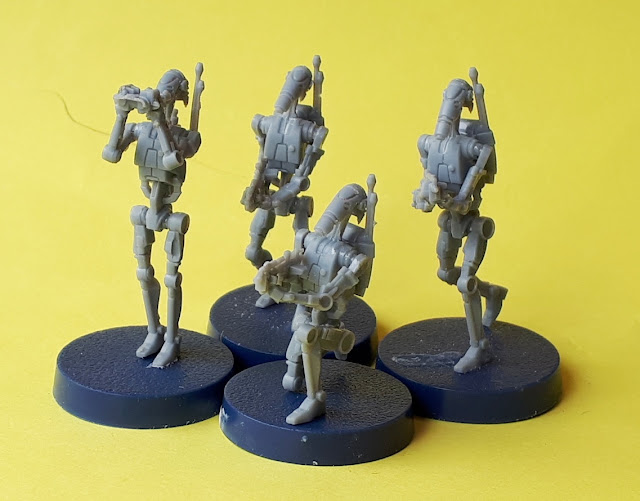 They're all called Roger...


Having got these under way (they do look good when constructed) I idly considered getting them some opponents. Clone Troopers, perhaps. This is when I discovered that the Star Wars Legion stuff is almost impossible to obtain. Is this just a UK problem? Is it because they are made in China? What is the point of launching a big game from an enormously well known franchise if you can't get any of the product? Poor management and distribution. I was ready to spend some of my new pension money on it but can't!  Maybe I'll buy a Rohan house instead. Except you can't. 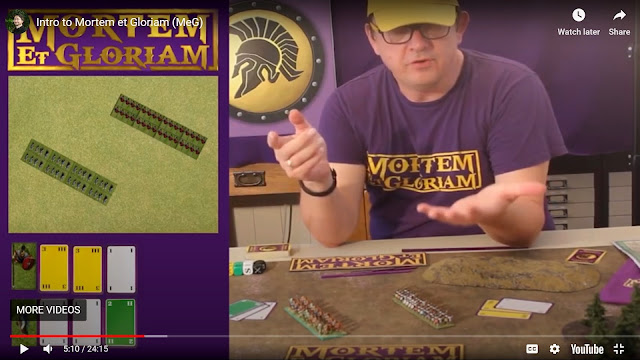 I have been looking, inevitably, at a load of other wargames stuff which I shouldn't be thinking about and two are from the Plastic Soldier Company, a firm I have never bought anything from (yes, there are some). Firstly, I watched a You Tube video (embarrassingly, as I always feel if I do this my IQ will drop twenty points, I'll start calling it 'follidge', slurping tea noisily, having a disgusting beard and all the other things that put me right off YouTube hobby videos) on PSC's Mortem et Glorium rules. Please can we have no more Latin names for wargames rules? It just reminds me of Latin at school and cursed Caecilius, his ugly family and nasty dog.  This video effectively put me right off the rules as they were one of those sets where vast proportions of units can be knocked out in one turn. I had decided to look at them because of their new 15mm plastic figure, which I saw previewed in Wargames Illustrated. These are made of some sort of bendy plastic (or resin); perhaps like the John Carter figures. The figures are quite  nice (not very nice) although they suffer from cricket bat sword syndrome. The video was quite well done but I couldn't follow the rules for the life of me and don't wear a hat indoors! Such are the things that loses the Legatus as a customer. I think I'll stick to metals for this scale (not that I have really painted any 15mm metals yet).  Possibly this will be Proect Five or Six this year. 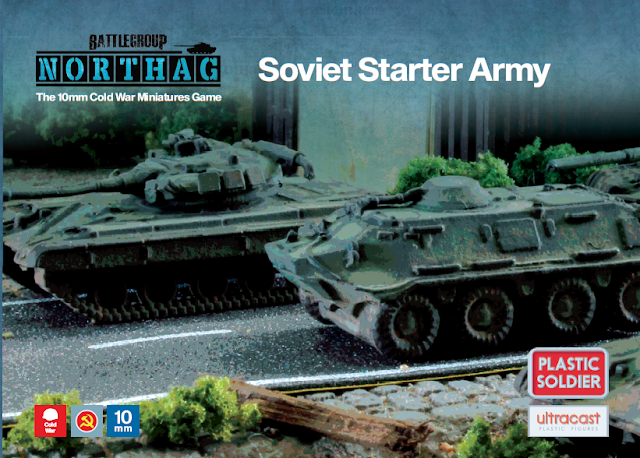 Also coming out soon from PSC is a new range of 10mm tanks and figures for an imagined WW3 game set in 1983 called Battlegroup Northag (ugly name; it sound like a witch from Yorkshire). The tanks look very nice but the figures are squat and horrid.  They are all in the new bendy plastic so I can see a lot of flaking gun barrels like the old Airfix polyurethene tanks. Maybe this is why the complete barrel is not shown on the box as it has gone bendy! Now I have, in the past, flirted with the idea of wargaming this imaginary alternative history, mainly because I enjoyed a book by Harold Coyle called Team Yankee many years ago. This featured a Soviet nuclear strike on Birmingham, which seems like an excellent concept.  In fact, my sister, who knows about such things, once told me that in the event of a conventional war in Europe the Russian;s first tactical nuclear target was actually Staines, where I am from, because Heathrow Airport would have been a major staging point for US aircraft.

Of course Team Yankee is already another, 15mm, game by Flames of War but, again, I am not impressed by the figures nor the Warhammer 40,000 style point blank tank conflict. If the PSC ones had had US opponents instead of British I might have been in trouble. Worryingly Victrix's promised 12mm figures for WW2 look really nice but I am safe on those for a while. Anyway. as I am struggling to paint 28mm figures, 12mm is surely lunacy.  But... 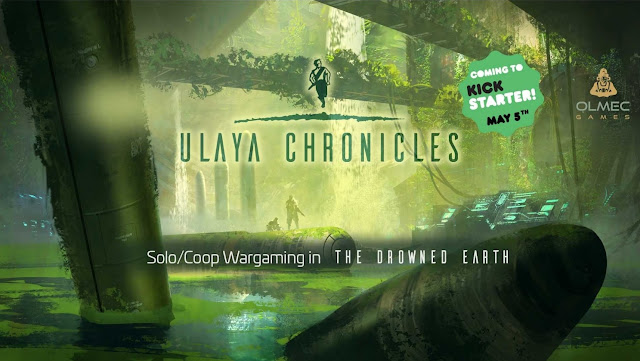 One game which is real science fiction but I have always been interested in is The Drowned Earth. I like the setting and I really like the figures and, like Savage Core, it utilisse small forces. I had a chat with the friendly chaps behind it at Salute about three years ago and, sadly, they said it was not possible to play it solo. However they are launching a solo version next week, pitting your forces against dinosaurs. One of which is Baryonyx, Surrey's very own dinosaur, the first skeleton of which was found only ten miles from where I live. Hmm... 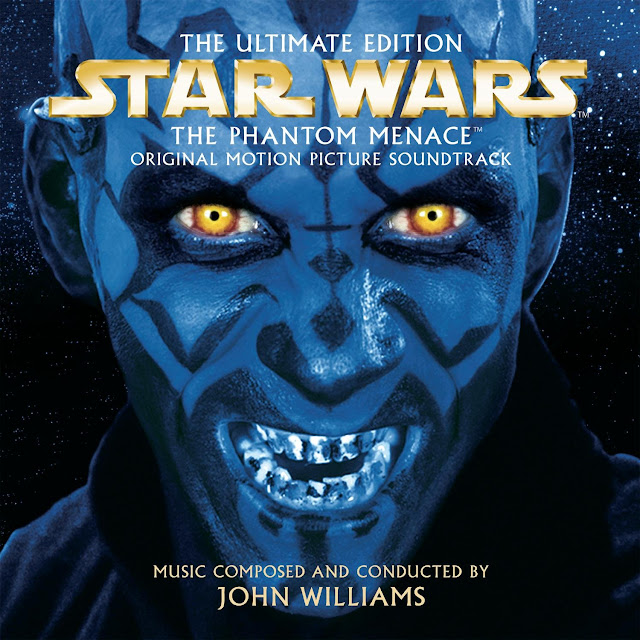 While assembling my droids I listened to the extended version of John Williams music for Star Wars The Phantom Menace.  In retrospect this is, I think, the fourth best of his nine Star Wars Scores (The Empire Strikes Back is the best, of course and the loss of Herbert Spencer as orchestrator was felt in the later scores).  I like it more and more. As the Old Bat is still mostly in bed I then watched the film again in the evening, purely to research the droids, of course.  I don't suppose the Star Wars Legion people will ever release a Gungan army, sadly, as who wouldn't want to squash Jar Jar Binks with a hover tank?

Today's naked lady comes form the brush of French artist Yves Diey (1892-1985). This picture, which dates from the early fifties, was sold at Christies eight years ago for £2,750. Bargain!
Posted by legatus hedlius at 5:20 pm