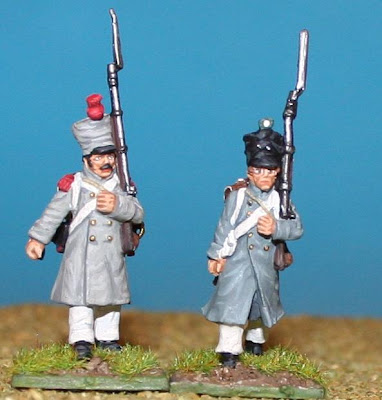 Plastic on the left, metal on the right 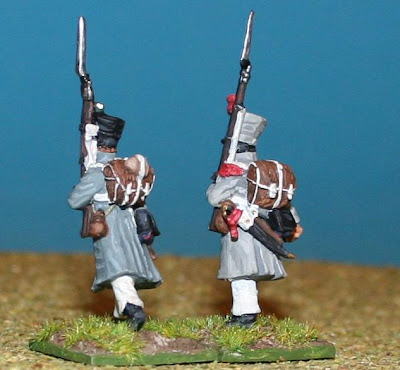 Metal on the left, plastic on the right

Well, I have started work on my first French unit (100th Line) and have actually completed two figures this weekend, which is not bad as I had to go around a possible school for my little boy and attended the Barry Gray 100th anniversary concert at the Festival Hall.

I did two figures in greatcoats so I could get them done quickly. A few observations. The plastic figures have better faces, more inscale rifles and bayonets but less fur detail on their packs (I had to paint a fur effect rather than dry brushing). There is only one small bit on the left coat turnback where the figure is indistinct because of the moulding process (not visible on the greatcoat figure). The detail on the rifle is not as crisp as the metal figure but then it doesn't bend either!

The main difference is that the plastics have the round pom poms of the first battalion whereas the metals have the flat discs of the subsequent battalions. This only applies to fusiliers, of course, the flank companies had the same shako plumes. 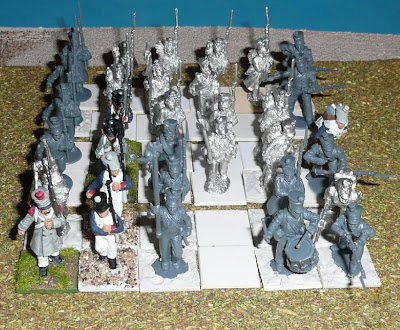 100th Line so far. One of the first two units to engage the Dutch 27th Jaegers at Quatre Bras
This has an effect on my first unit. The 100th Line had 3 battalions at Quatre Bras and at 1/33 the regiment comes out as 3 battalions of 12. I think a 36 man unit should be fine for the Charles Grant rules. I need another drummer and a mounted Colonel for this unit so will send off an order to the Perries next week. I also need a flag so will look at GMB for that.
With my left over plastics and metals I have started to base some figures for the 4th light, the other regiment in Jamin's 2nd Brigade of Foy's 6th Division. This will be a bigger unit with 48 figures (he says casually).
The next three French are under way along with a couple more Dutch Jaegers and a cuirassier. I can't believe I am painting Napoleonics again!
Posted by legatus hedlius at 7:36 pm